Accessibility links
How Long Can Florida's Citrus Industry Survive? : The Salt The USDA recently stunned growers when it projected the smallest orange harvest for Florida in more than 50 years. The culprit: A tiny insect that's killing off the state's trees — and industry. 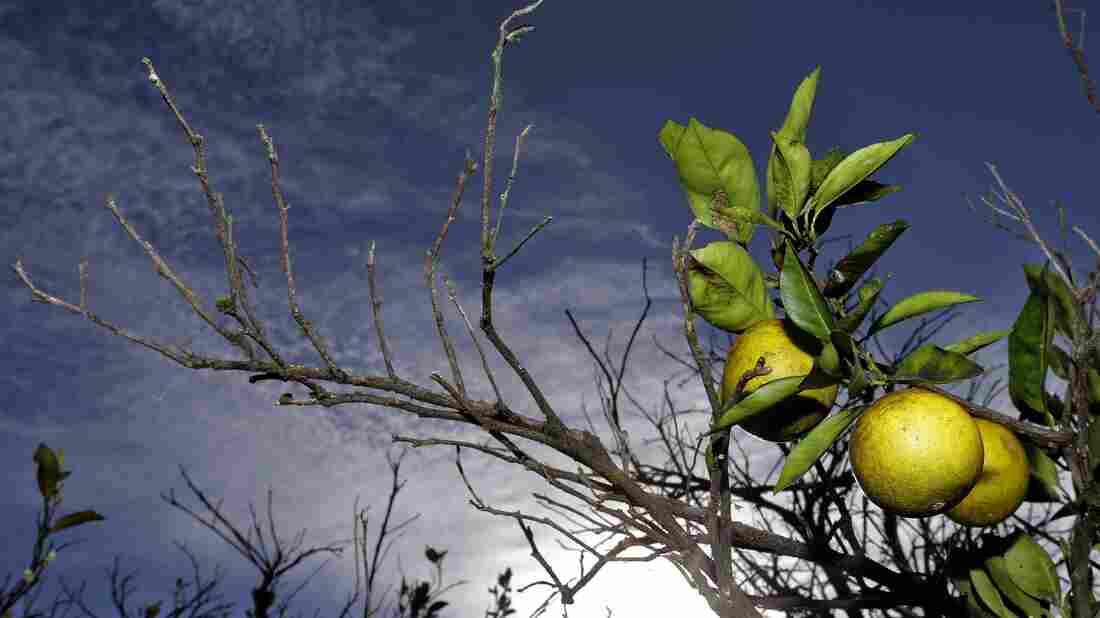 Oranges ripen in a grove in Plant City, Fla. Citrus greening, a disease spread by a tiny insect that ruins oranges and eventually kills the trees, has put the future of the state's $10 billion citrus industry in doubt. Chris O'Meara/AP hide caption 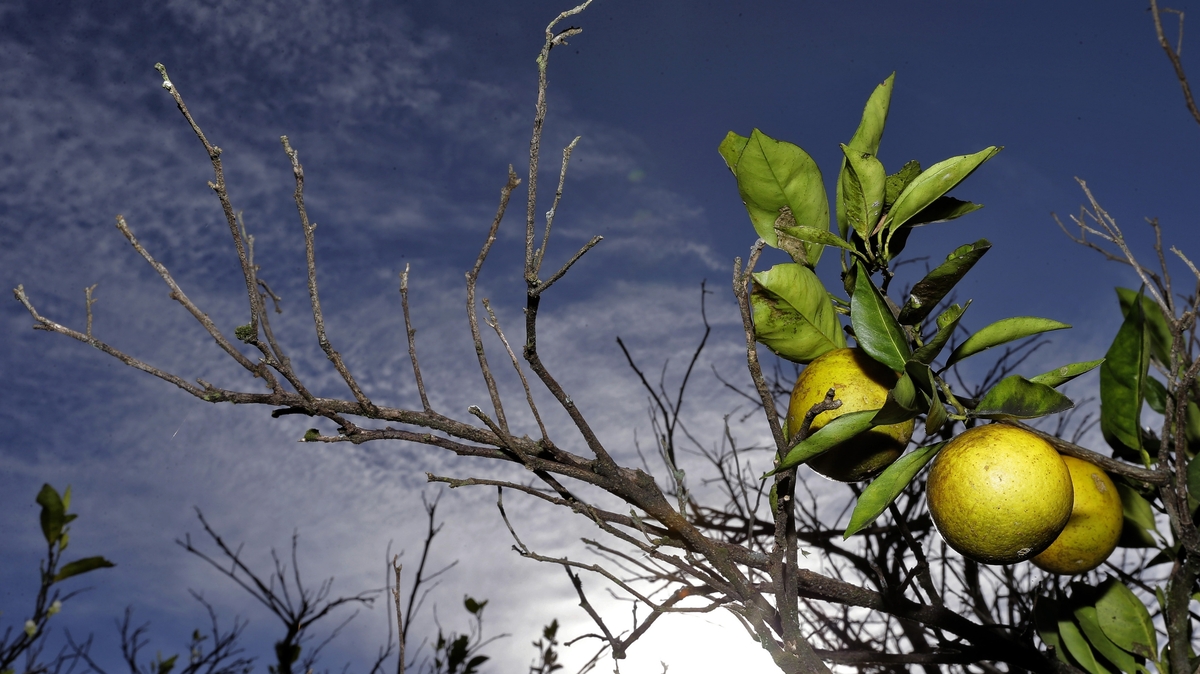 Oranges ripen in a grove in Plant City, Fla. Citrus greening, a disease spread by a tiny insect that ruins oranges and eventually kills the trees, has put the future of the state's $10 billion citrus industry in doubt.

While others are thinking about the holidays, in Florida November is the beginning of citrus season. Grower Jeff Schorner sells citrus fruit gift boxes by mail order and at his store, Al's Family Farm in Fort Pierce.

"We began our harvest about three weeks ago," he says. "And we'll harvest all the way about until the beginning of June." Right now, it's navel oranges. Next come tangerines, ruby red grapefruit and the popular honeybell tangelos.

In Florida, citrus is so important, oranges are on the state's license plate. But a disease, citrus greening, has taken a severe toll on Florida's signature crop. Researchers and growers are working on a solution but they received a shock recently: The U.S. Department of Agriculture said, after years of decline, there would be an additional 20 percent drop in Florida's orange production this season.

Outside his market, Schorner has a small citrus grove. He says for growers, fighting citrus greening disease is challenging and expensive. "We're doing the same level of care," he says. "But we're doing it three times as often." And that's tripled per acre expenses.

Citrus growers in Florida, California and Texas have contended with a variety of diseases and pests over the years. But none has posed the threat they now face with citrus greening. A tiny insect, the Asian psyllid, carries bacteria that ruin the fruit and eventually kills the tree.

It's been nine years now since the disease was confirmed in Florida. It infects every part of the state and has led to a steady decline in orange, tangerine and grapefruit production. The USDA stunned Florida growers when it announced it was lowering its estimate of this year's orange crop to 74 million boxes. That would be Florida's smallest orange harvest in more than 50 years.

Now some in Florida are questioning how much longer the citrus industry can survive. Florida's agriculture secretary, Adam Putnam, says the future of the state's $10 billion citrus industry hangs in the balance. "If the estimate plays out, it will be half of what we harvested just four years ago," he says. "We are at a tipping point, and some would say we've blown past the tipping point."

That's the point at which there's no longer enough fruit to sustain all the juice plants and packing houses. If enough shut down, it could spell the end of an industry that provides some 76,000 jobs in Florida.

Putnam spoke at a state senate workshop in Sebring, in the heart of Florida's citrus-growing region. Grower John Barben was also there. He tends citrus groves in Highlands County that were planted by his father 60 years ago. He's begun to dread the annual USDA crop estimate. He says, "It's just like having your heart stomped on every year at this time. We sort of joke every year, 'Well, we'll know next June if we did the things right or not.' "

When citrus greening first emerged, researchers and growers pinned their hopes on finding a cure. They began looking for an effective treatment or a new variety of disease-resistant trees. But a cure has proved elusive. So now, the industry has focused on strategies to keep infected trees healthy and productive as long as possible. Growers are using costly treatments like extra fertilizer and pesticide. Some also have also begun using heat to control the disease, subjecting trees to periodic steam baths.

At his 35-acre research facility in Vero Beach, Bob Adair has had promising results with something he calls metalized reflective mulch. "It's a monomolecular layer of aluminum," he says, "a very, very thin coating of aluminum, very shiny. Looks much like aluminum foil."

Underneath a row of grapefruit trees, the ground is covered by a silvery plastic sheet. It acts like a mirror, reflecting the light and heat of the intense Florida sunshine. "As we stand here," Adair says, "you can probably feel the heat. And what we're looking at are trees that are growing 50 percent faster than trees that were planted with the grower's standard, which is bare ground."

Even more important, on trees with the metalized mulch, Adair is seeing fewer Asian psyllids, the insects that carry citrus greening disease. "So we have a healthy tree, a bigger tree with more fruit," he says. He believes it could be a valuable tool for growers, helping keep their groves productive while the search continues for a cure.

Adair's project is one of dozens in Florida competing for scarce research dollars. Since citrus greening appeared there, more than $176 million in state, federal and grower funds have been spent on the search for solutions. And some are impatient for results.

At the recent workshop, a state senator asked growers when the legislature might expect to see a return on its investment. Grower Marty McKenna said for the industry, spending on research has bought hope, and that's what keeps him and other growers going. "That money has allowed this industry one more year, this year," McKenna said. "Without the huge investment in research, we can't continue to go forward. We have that hope that the research will pull us through."

Last week, the University of Florida announced that it has developed a genetically modified orange tree that appears to be resistant to citrus greening. But even if that turns out to be the silver bullet growers have been waiting for, with field testing and government approval, it will still be years before it becomes commercially available — not to mention the consumer opposition GMO oranges would likely face. Clearing those hurdles may come too late for many in Florida's citrus industry.