Accessibility links
When Tipping Was Considered Deeply Un-American : The Salt Imported from Europe, the custom of leaving gratuities began spreading in the U.S. post-Civil War. It was loathed as a master-serf custom that degraded America's democratic, anti-aristocratic ethic.

When Tipping Was Considered Deeply Un-American

When Tipping Was Considered Deeply Un-American 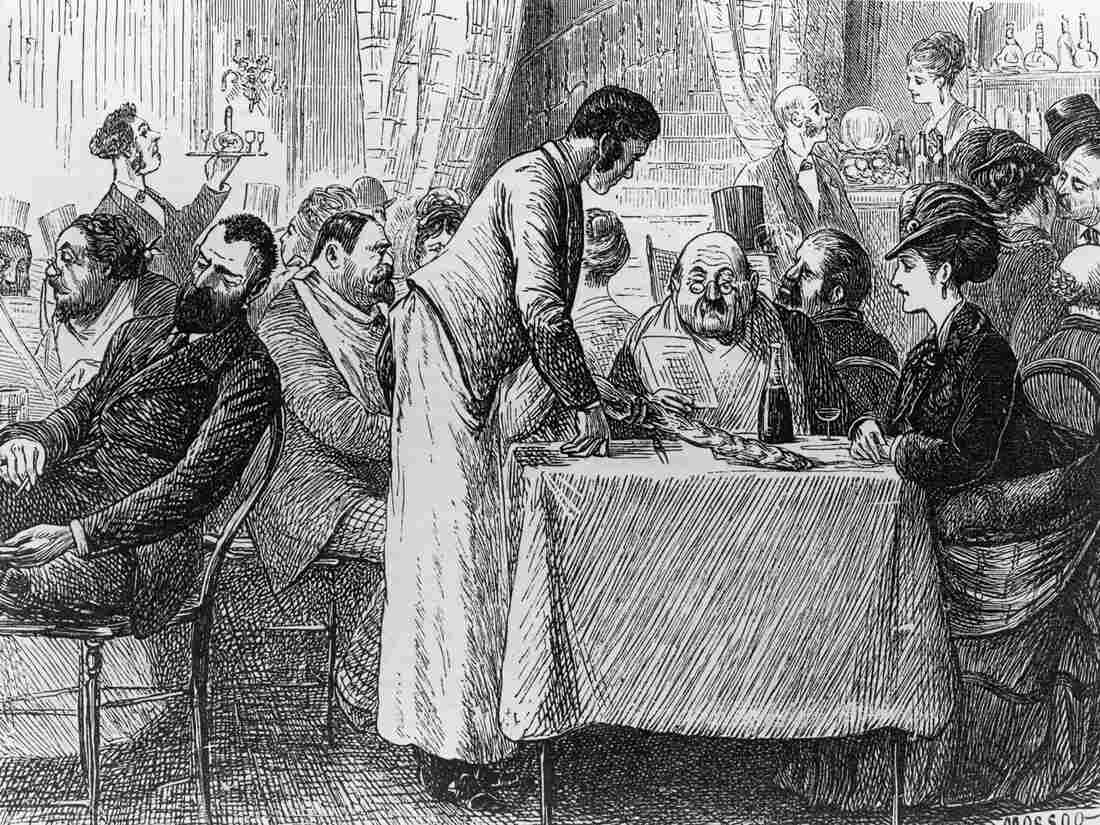 Imported from Europe, the custom of leaving gratuities began spreading in the U.S. post-Civil War. It was loathed as a master-serf custom that degraded America's democratic, anti-aristocratic ethic. Hulton Archive/Getty Images hide caption 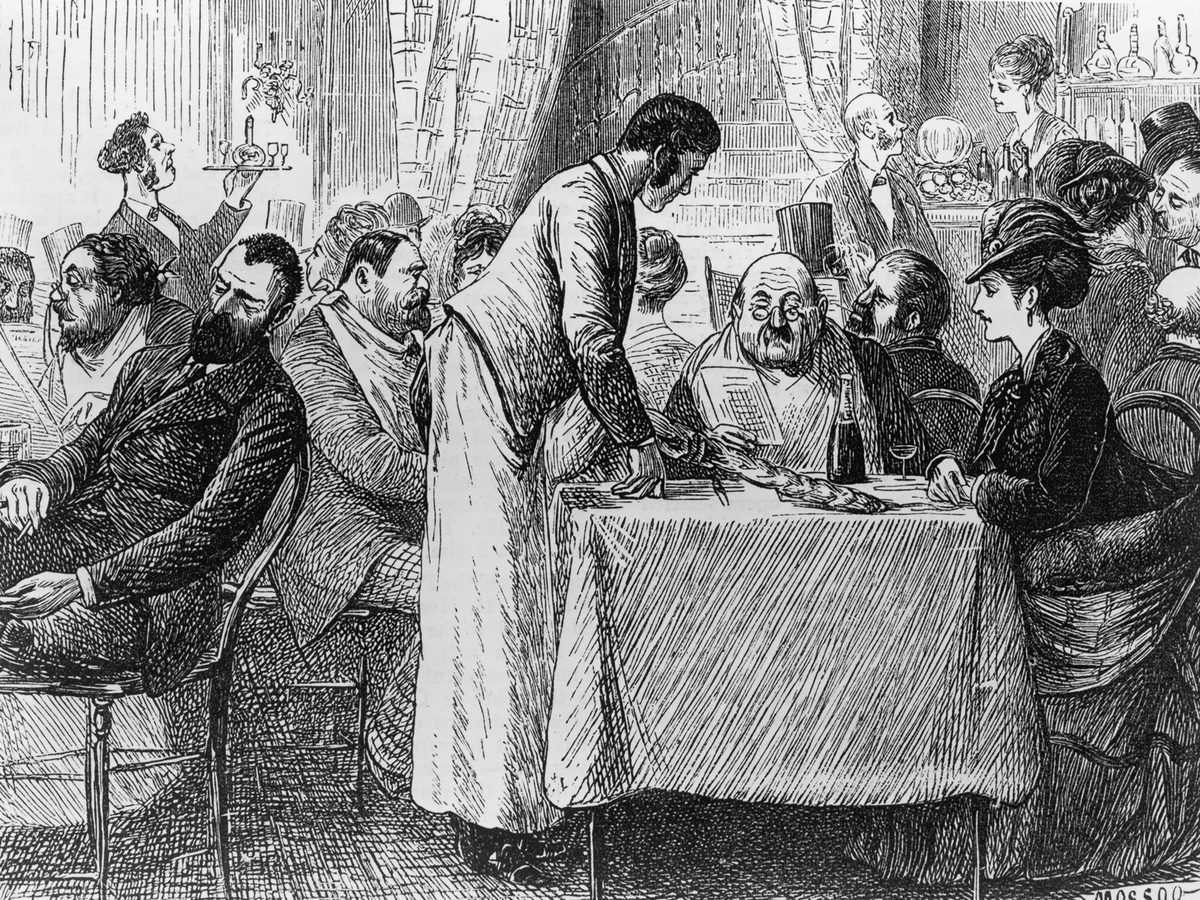 Imported from Europe, the custom of leaving gratuities began spreading in the U.S. post-Civil War. It was loathed as a master-serf custom that degraded America's democratic, anti-aristocratic ethic.

Today's restaurants abandoning the tipping system are part of a long heritage of people — including Emerson and Twain — raging against the gratuity system.

With New York restaurateur Danny Meyer banning tips in his restaurants and Berkeley restaurateurs Andrew Hoffman and John Paluska joining the no-tip bandwagon, the tipping debate has clinked back into the headlines of late.

Except it never really went away.

To tip or not to tip constitutes one of the oldest and nastiest debates surrounding America's restaurant business.

When tipping began to spread in post-Civil War America, it was tarred as "a cancer in the breast of democracy," "flunkeyism" and "a gross and offensive caricature of mercy." But the most common insult hurled at it was "offensively un-American."

Loathed as a master-serf custom of the caste-bound Old World that went back to the Middle Ages, tipping was blamed for encouraging servility and degrading America's democratic, puritanical, and anti-aristocratic ethic. European immigrants surging into the U.S. were charged with bringing this deplorable custom with them. But in fact, it was also American tourists, like the characters in Henry James' novels, who picked up the restaurant conventions of the Continent, and imported them back to America.

In James's 1897 novel What Maisie Knew, 6-year-old Maisie, breakfasting with her English stepfather, Sir Claude, at a quayside French café, watches the waiter retreat "with the 'tip' gathered in with graceful thanks on a subtle hint from Sir Claude's forefinger." Significantly, the word "tip" is in quotation marks, indicating its newness to the little girl, as well as to James' American readers.

For their part, Europeans were irked by wealthy Americans who ruined the rates by over-tipping — not just during the Gilded Age, but in more recent times as well. According to Kerry Segrave's Tipping: An American Social History of Gratuities, conservative thinker William F. Buckley Jr. was in the habit of leaving a scandalously lavish propina for the staff of the Swiss chateau he rented in the 1980s. He used the Spanish word for tip, his son Christopher explained, "since it's money, you know, it's best not to discuss it directly."

America's anti-tipping hall of fame includes millionaires John D. Rockefeller and Andrew Carnegie, who were stingy tippers, and Ralph Waldo Emerson, who famously said, "I sometimes succumb and give the dollar, yet it is a wicked dollar, which, by and by, I shall have the manhood to withhold." A 1901 editorial in the Chicago Times-Herald congratulated Mark Twain for refusing to tip a cab driver, and added, hyperbolically, that should the writer lived to "claim credit for its abolition[,] he will deserve greater gratitude from the public on that account than for anything that he has written or ever may write."

Famous anti-tippers (from left): Leon Trotsky, William Howard Taft and Mark Twain. Trotsky refused to tip his waiters while living in the Bronx. The Russian revolutionary thought the practice let capitalist restaurant owners off the hook.

The long-suffering public grumbled incessantly about being at the mercy of surly waiters and porters who performed only when bribed. The attitude was summed up by the young prostitute in F. Scott Fitzgerald's 1920 novel, This Side of Paradise, who, when caught with a patron in a hotel room, says angrily: "Alec didn't give the waiter a tip, so I guess the little bastard snitched."

The tipping abolitionist campaign came to a boil in 1915, when three states (Iowa, South Carolina and Tennessee) passed anti-tipping laws, joining three other states (Washington, Mississippi, and Arkansas) that had already passed similar bills. Georgia soon followed. By 1926, however, all these anti-tipping laws were repealed, writes Segrave, largely because it was seen as futile to police something that had gained a momentum of its own.

Tipping also had a racial angle. "Class, race and gender all played a part in the early discussions of tipping," writes Segrave. He quotes journalist John Speed writing in 1902, "Negroes take tips, of course, one expects that of them – it is a token of their inferiority. But to give money to a white man was embarrassing to me."

Such was the furor surrounding tipping that, in 1907, Sen. Benjamin Tillman of South Carolina – a virulent segregationist whose bronze statue stands outside the statehouse in Columbia – actually made national headlines for tipping a black porter at an Omaha hotel. The porter, well aware of Tillman's previous boast that he never "tips a nigger," told reporters sardonically that he would have the quarter made into a watch charm. "Tillman gives Negro a Tip," was The New York Times' headline, under which ran a sympathetic editorial on how travelers were forced "to convert themselves into fountains playing quarters upon the circumambient Africans."

Tipping even became an election issue, writes Segrave. When William Howard Taft, who prided himself on never tipping his barber, ran for president in 1908, he was projected as "the patron saint of the anti-tip crusade." Today, several Democratic presidential hopefuls have campaigned on raising the minimum wage – an issue that was, and continues to be, at the heart of the tipping debate.

Then, as today, the crux of the matter was the low wages paid to waiters, making them dependent on patron largesse. The waiters' cause was taken up by union member T. O. Smith, in the 1919 edition of The Mixer and Server, a trade journal of restaurant and hotel employees. He said waiters were unfairly accused of having "an itching palm," when the truth was that the "waiter was not the author, but the victim of the tipping system."

Smith was referring to a popular 1916 anti-tipping jeremiad by a writer named William R. Scott entitled, The Itching Palm: A Study of the Habit of Tipping in America. Scott's screed decried the millions of Americans who derived their income from tips as suffering from a "moral malady."

But Smith pointed out acerbically that while the newspapers were dripping with concern for the "long suffering public," not too much thought was directed at the "long suffering waiter." He said the unjust system forced waiters to "learn the art of smiling under even the most adverse circumstances" – for a frown, however justified, would cost him not only his tip but perhaps his job as well. It was tougher for black waiters, who were commonly paid a lower wage than white waiters.

Russian revolutionary Leon Trotsky refused to tip and had soup spilled on him by vengeful waiters in the Bronx (where he lived briefly). He believed that tipping allowed capitalists, a.k.a. restaurant owners, to get off the hook. If the waiters were being paid a decent wage, he said, tipping would die on the vine.

Over time, however, the opposition to tipping faded. "Tipping eventually became more entrenched in American life than in any other country," writes Segrave.

In 1942, the Supreme Court ruled that employees had an exclusive right to their tips and that their employers could not force them to share their tips with kitchen staff.

In 1966, Congress created a concept known as "Tip Credit." This system allows employers to pay tipped employees a sub-minimum wage on the understanding that the rest of the wage would be made up by the largesse of customers. Which is why, to this day, the federal minimum wage for tipped employees is just $2.13 per hour.

Tipping remains a deeply divisive issue. Many waiters at fine-dining restaurants prefer the tip system because it means a higher income — but it's harder for those who toil away in diners and lower-end eateries to earn a livable wage. No-tip restaurants like Alice Waters' famous Chez Panisse in Berkeley, Calif., have a fixed service charge that is divided among the whole staff, including the kitchen. As a result, waiters get less, but the back-of-the-house staff — traditionally left out of tipping — get more.

The irony is that, though Americans imported the tipping custom from Europe, countries such as France have long done away with tipping: A 15 percent service charge is automatically added to the bill, and customers aren't obliged to tip. As a result, a French schoolgirl visiting the U.S. might find herself, like Maisie, curiously eyeing the "tip" in the billfold.