Accessibility links
Apocalypse Chow: We Tried Televangelist Jim Bakker's 'Survival Food' : The Salt Jim Bakker preaches that a catastrophe is imminent and will bring major food shortages. His "Survival Food" buckets sell for up to $4,500. We tested the contents of one for you. 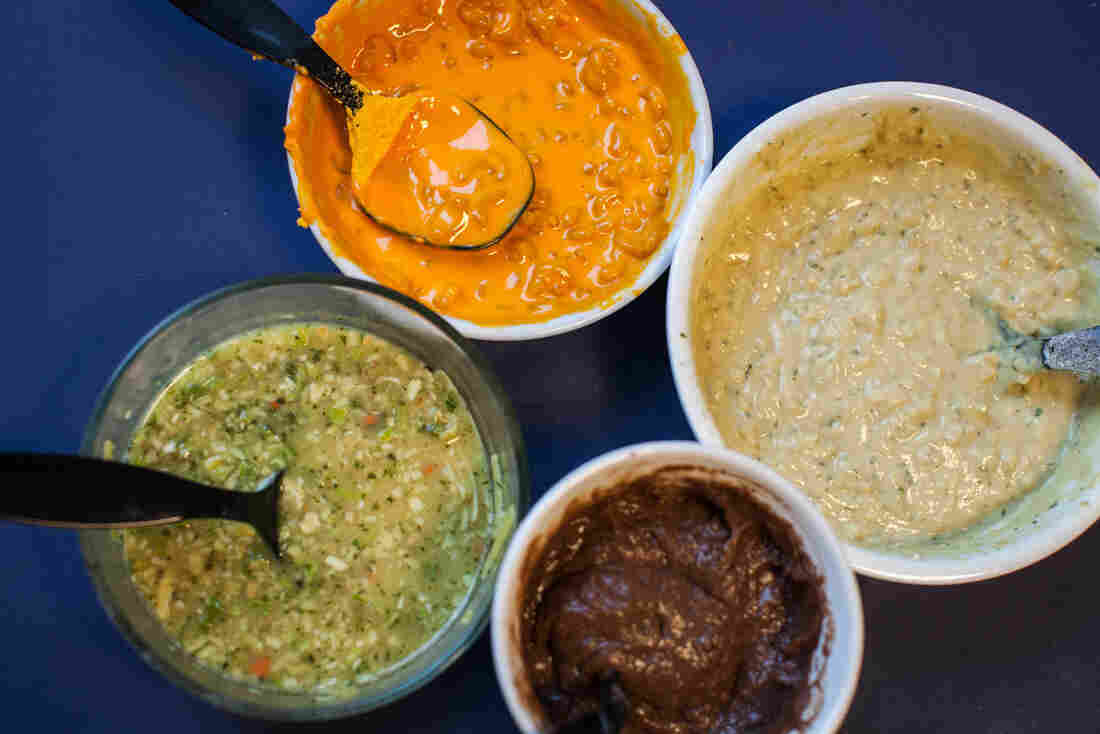 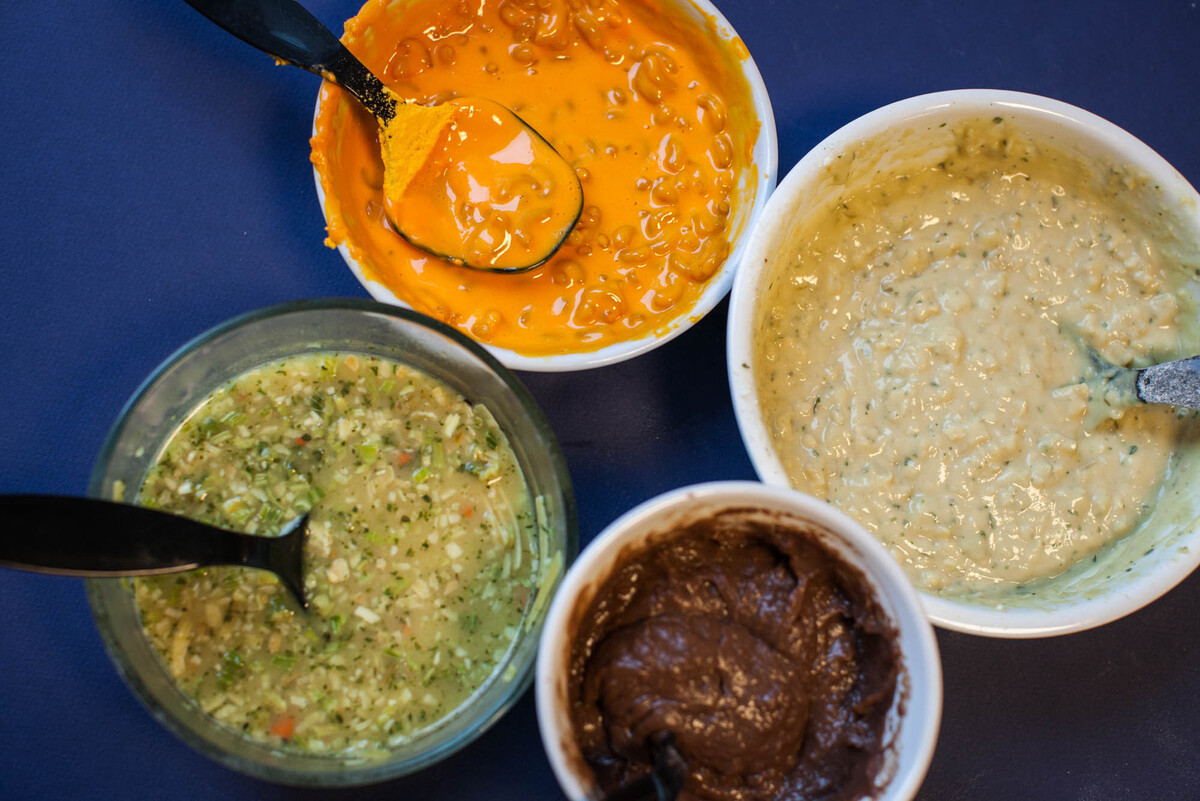 If it's the future, and the end of the world is nigh, it's probably safe to assume that things are looking grim. If all you have to eat is the survivalist food you bought from televangelist Jim Bakker in 2015, then your situation may be considerably worse. 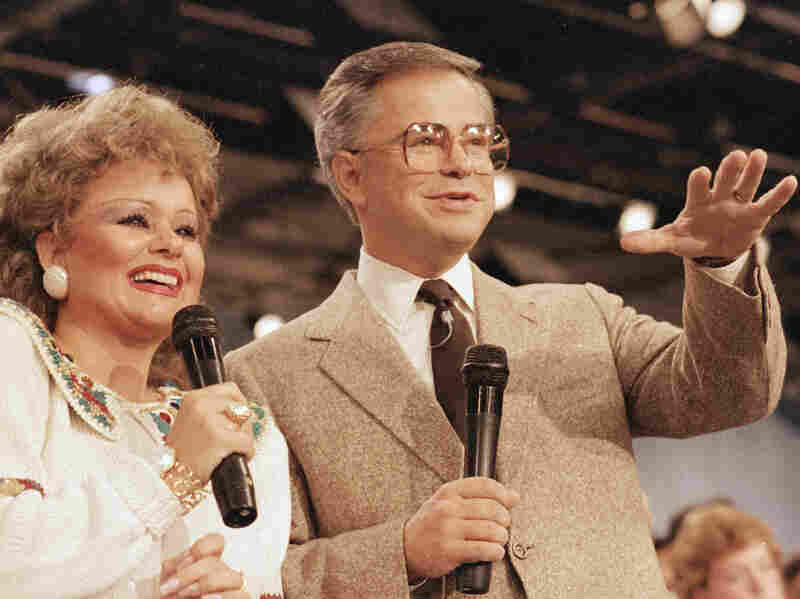 Jim Bakker and his first wife, Tammy Faye, in 1986. Bakker now sells an array of food products on the television show he co-hosts with his second wife, Lori Bakker. Lou Krasky/AP hide caption 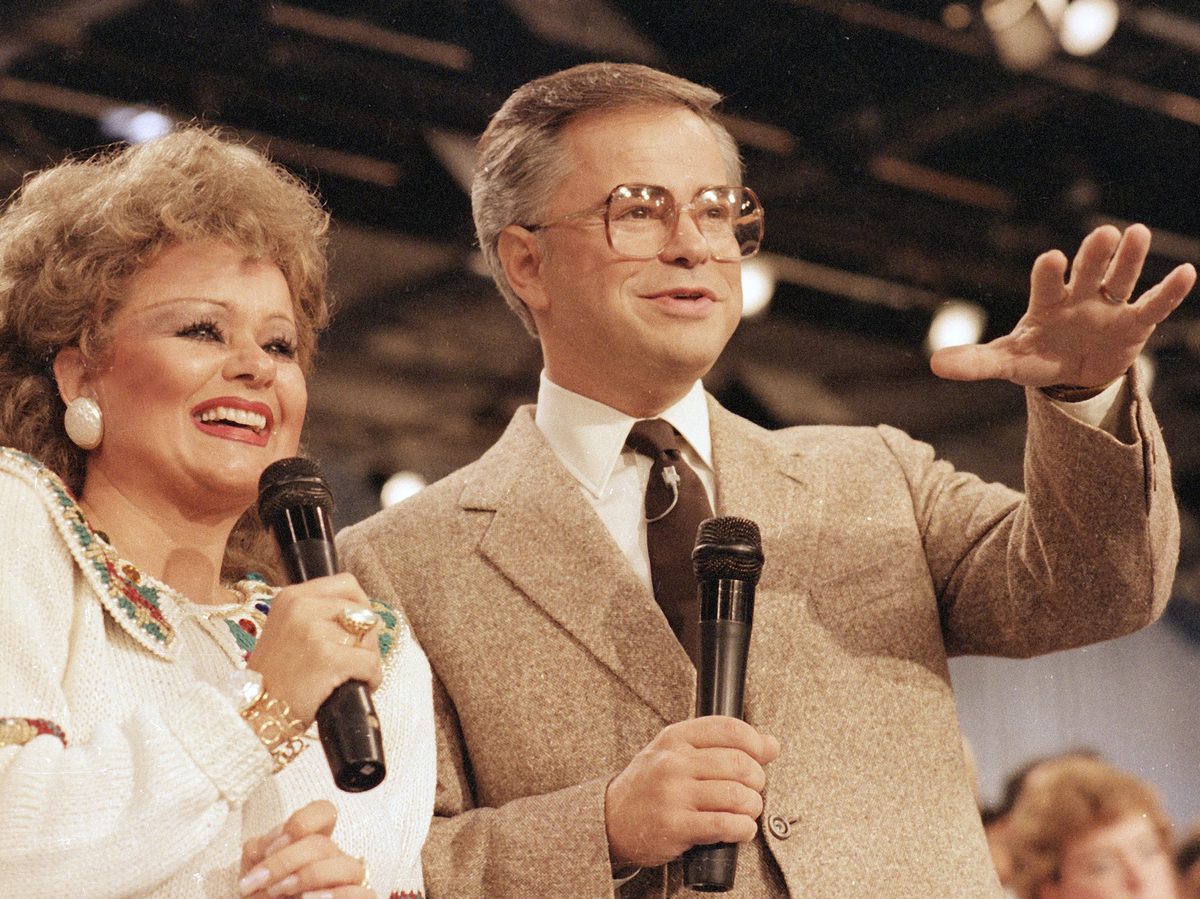 Jim Bakker and his first wife, Tammy Faye, in 1986. Bakker now sells an array of food products on the television show he co-hosts with his second wife, Lori Bakker.

You might recall Bakker's fall from grace in the '80s after a sex scandal and four-year stint in federal prison for time-share fraud. His wife at the time, Tammy Faye, was known in part for her dramatic eye makeup that frequently streaked her face during emotional TV episodes. (The Bakkers later divorced; Tammy Faye died in 2007.)

Jim Bakker is back, with a television ministry in Missouri and a wife named Lori. He's also selling food. Among the freeze-dried products available on his website is a 50-day "Survival Food" sampler bucket containing 154 meals. It will cost you $135, but the idea is that you'll be prepared when food shortages hit.

"Imagine — the world is dying and you're having a breakfast for kings," the ad for the the food proclaims.

We got our hands on a version of this bucket, which contains a variety of hearty dishes, including buttermilk pancakes, vegetable chicken soup, creamy stroganoff, black bean burgers, fettucine alfredo and mashed potatoes.

If you're an outdoor aficionado, you're probably familiar with freeze-dried food. That's what this stuff is, except all the packages have an expiration date of 2035. In addition to ample preservatives, each item is either nitrogen flushed or contains oxygen absorbers, reputedly to keep the food fresh.

Religious rhetoric around "the beginning of the end" is a common theme on The Jim Bakker Show. In October, three hourlong segments were devoted to Bakker's assertion that we are the generation that will experience Rapture. Followers must be prepared to survive and continue preaching the Gospel, he says.

And why not, as Bakker urges, buy food today so that you can "have parties when the world's coming apart?"

After tasting it myself, I'm going to have to say no thanks.

Here at NPR, we tried the creamy potato soup, macaroni elbows and cheese powder and the chicken noodle soup. And of course we had to test the chocolate pudding for dessert. 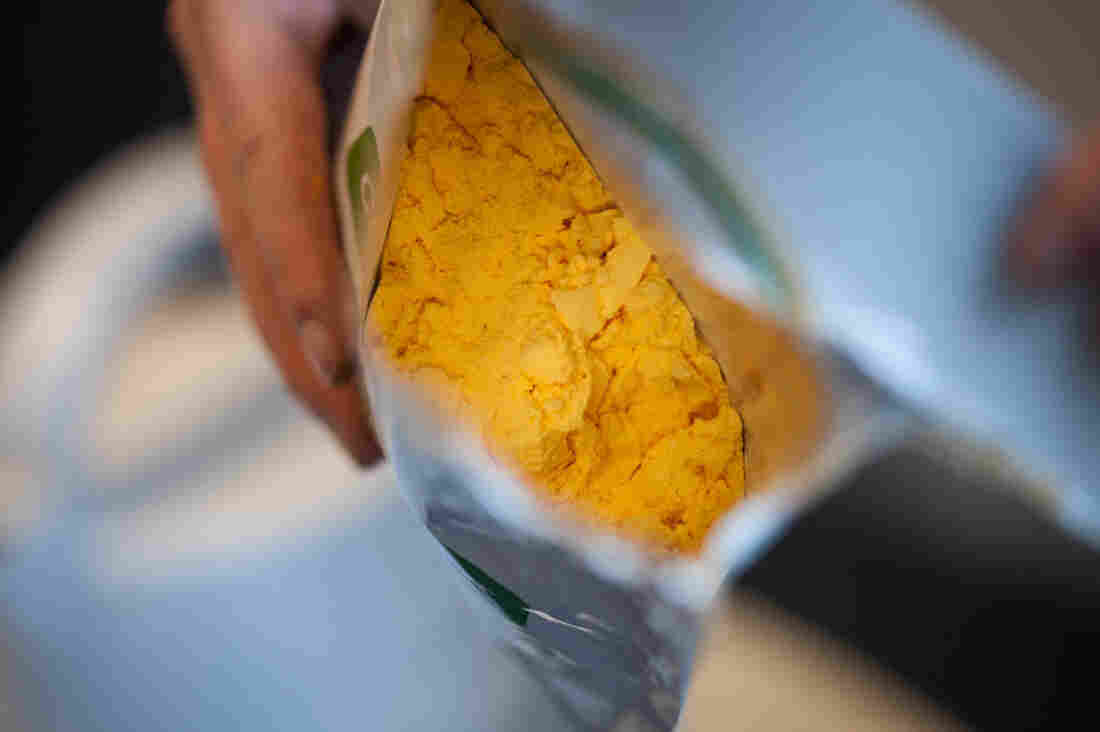 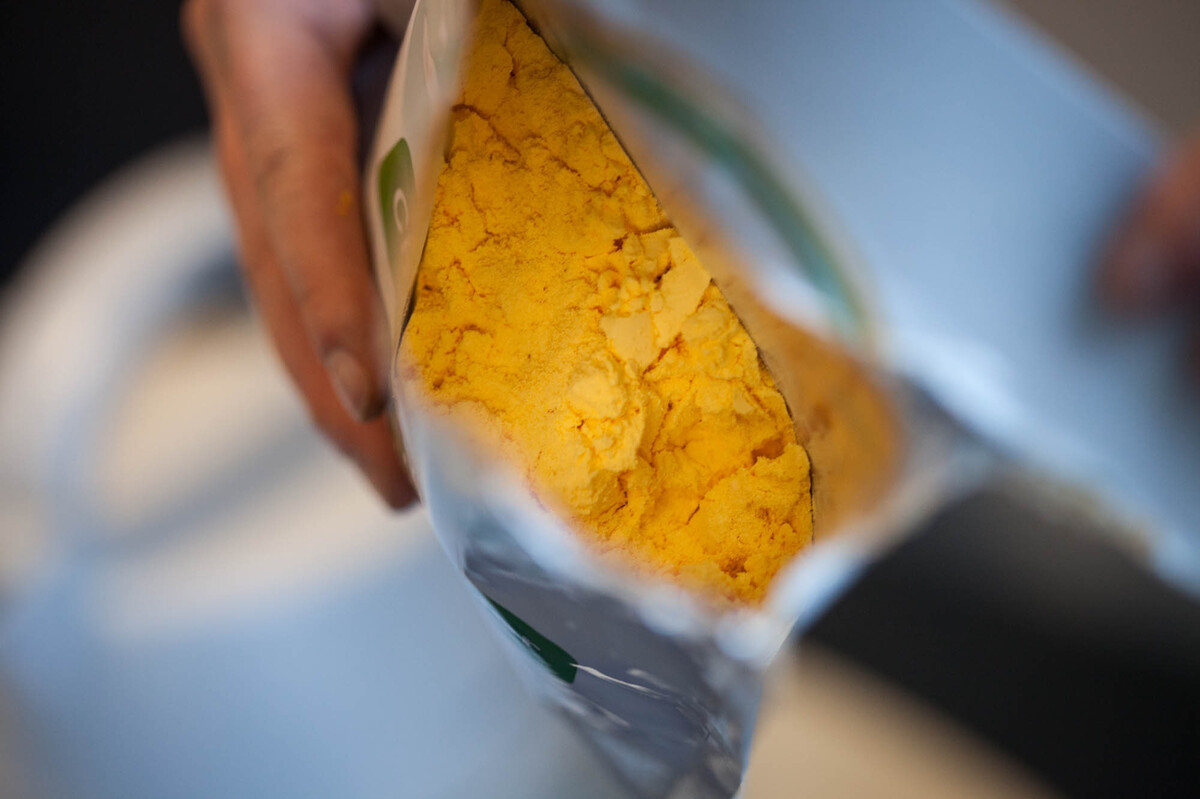 Save for the pudding, the dishes were extremely salty and had odd, lingering aftertastes. We couldn't agree on which was worse — the thick potato soup that felt like eating wet cement, the strong chemical overtones in the chocolate pudding or the disturbing radioactive orange of the macaroni and cheese.

(Pro tip: Do not make the mistake we made of adding more cheese than the recipe calls for.)

'Ingredients': An Eye-Opening Look At The Additives In Our Food

To be fair, our resources in the NPR kitchen are limited — we had no stove to cook the dishes, only an electric tea kettle to boil water. If you try this yourself, I'd recommend letting everything simmer. That might get rid of the lumps, and the taste might improve, too.

Even then, this most likely isn't what you'll want to be eating for your apocalypse meal. But don't just take our word for it.

"It's awful. It's trash," Greg Lauro, a chef who lives and works in Brooklyn, N.Y., tells The Salt.

They taste, he says, like, "paper-mache," "a bathroom at a bar at the end of the night in a college town," and, simply, "one of the worst things I've ever eaten in my life."

Frank Davis is the founder of Food For Health International — one of the two companies that manufacture the food The Jim Bakker Show sells. He takes issue with Lauro's brutal critique of survivalist food.

According to Davis, these dishes are actually quite tasty, especially when you consider they could last up to 40 years when stored in ideal, basement-like conditions. 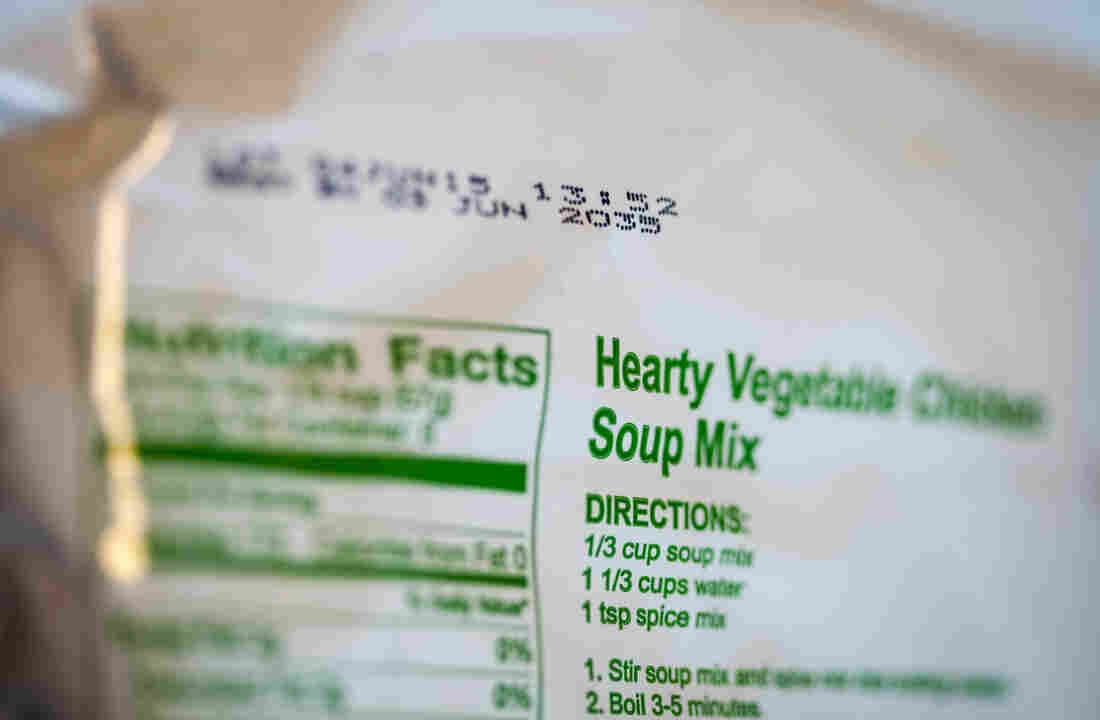 This soup has an expiration date of June 2035. Morgan McCloy/NPR hide caption 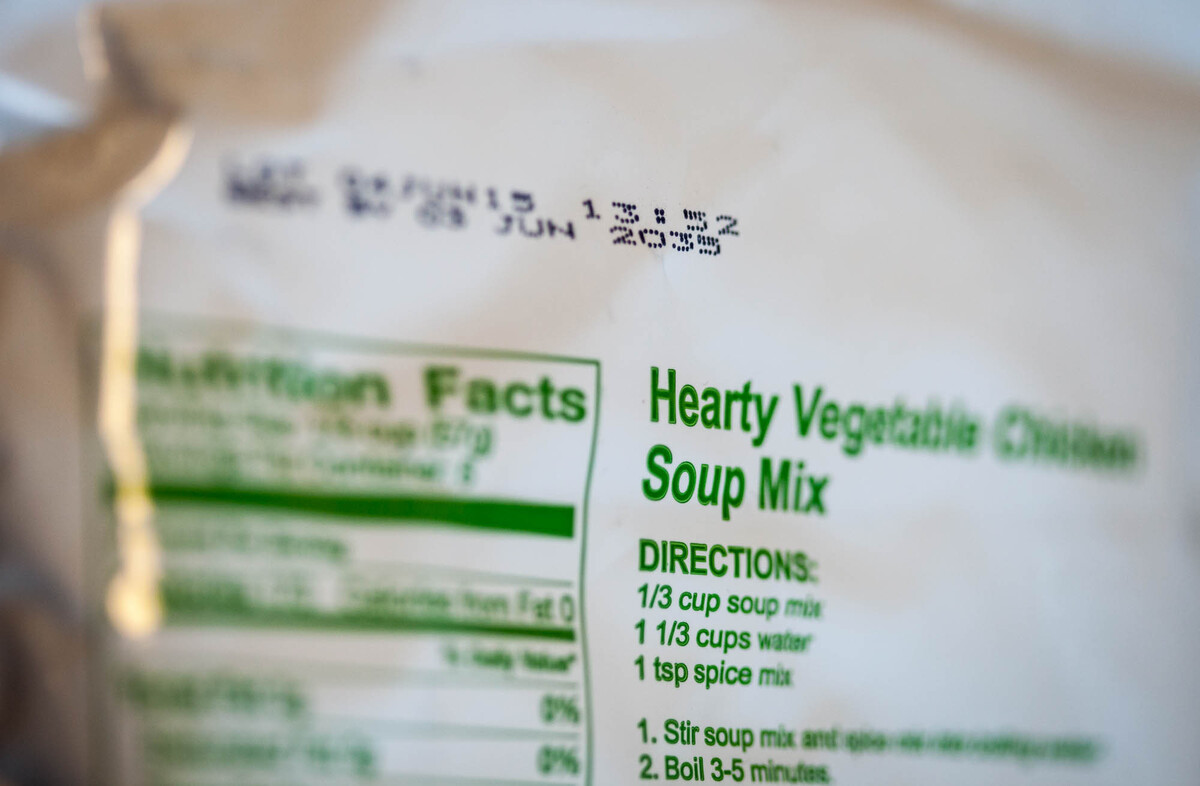 This soup has an expiration date of June 2035.

"It's crucial not to use anything that can go rancid, like animal fats. Even though animal fats make a cheaper and more flavorful base, there's just no way that will work. We use a vegetarian base," Davis says.

The impressive shelf life aside, Lauro says he objects to how the product is marketed.

"It's off-putting that [Bakker] is trying to sell this stuff on the taste, when it doesn't look or taste like anything he advertises," Lauro says. In the photos provided on the front of the bucket and online, for example, the soup has a completely different consistency — brothlike — than the solid, chunky mixture Lauro prepared in his video.

It's hard to know how popular Bakker's food line has been so far. When The Salt contacted The Jim Bakker Show, a spokesman said the show could not release sales data.

Lauro and the team at Sploid who helped him make the video, meanwhile, found other flaws in the notion that this food might one day save your life.

"If water is even safe to drink in this so-called apocalypse, you'd have to ration it. But when we used the exact amounts we were told, it looked very different from the smooth soup he shows — in a 5-gallon paint jug," Lauro says. The recipe on the package apparently doesn't call for enough water for an ideal consistency.

Want to try evangelical survivalist food? Suit yourself. If the 50-day bucket seems insufficient, you can opt for the Year For Two Tasty Food Offer, a bundle priced at $1,100, or the Peace of Mind Final Countdown Offer with 31,000 servings of food for $4,500.

Or you could focus on other contingency plans for feeding the planet in the future — like the doomsday seed vault designed to protect the genetic diversity of our seeds, or promoting alternative sources of protein like insects.

Kylie Mohr is a digital news intern at NPR.org.