Accessibility links
'A Confederacy Of Dunces Cookbook': A Classic Revisited In Recipes : The Salt Set in 1960s New Orleans, A Confederacy of Dunces centers around Ignatius J. Reilly, a glutton in a city known for its cuisine. A new cookbook looks at the food central to the heralded comedic novel. 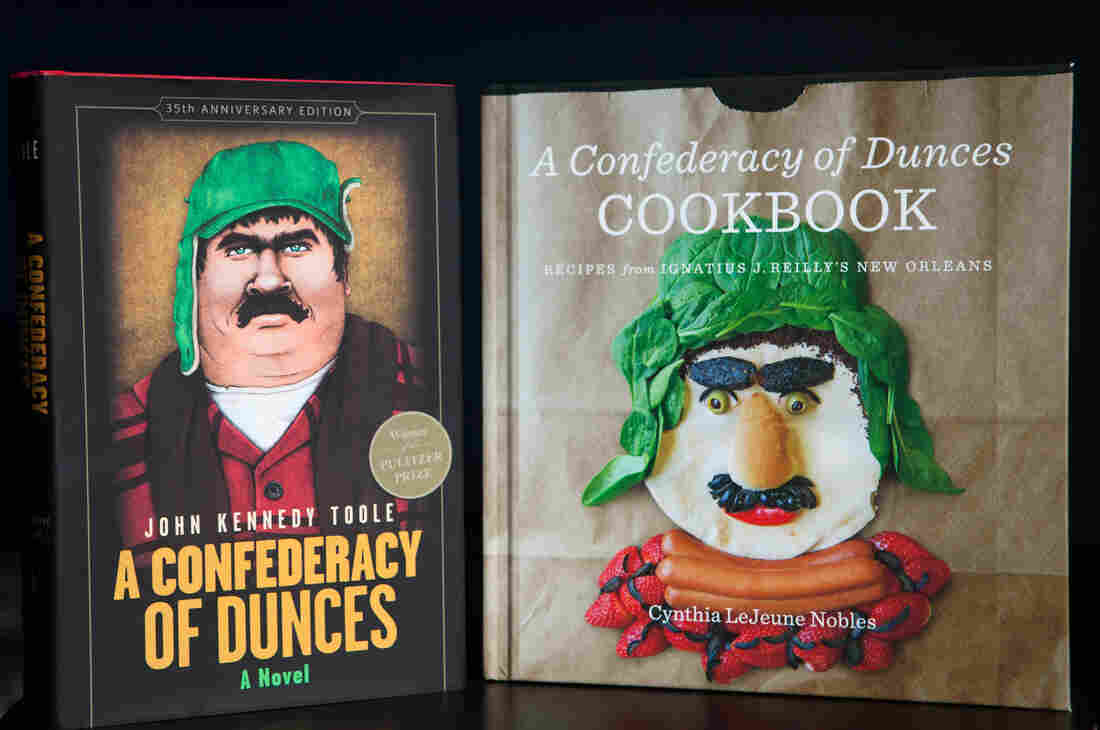 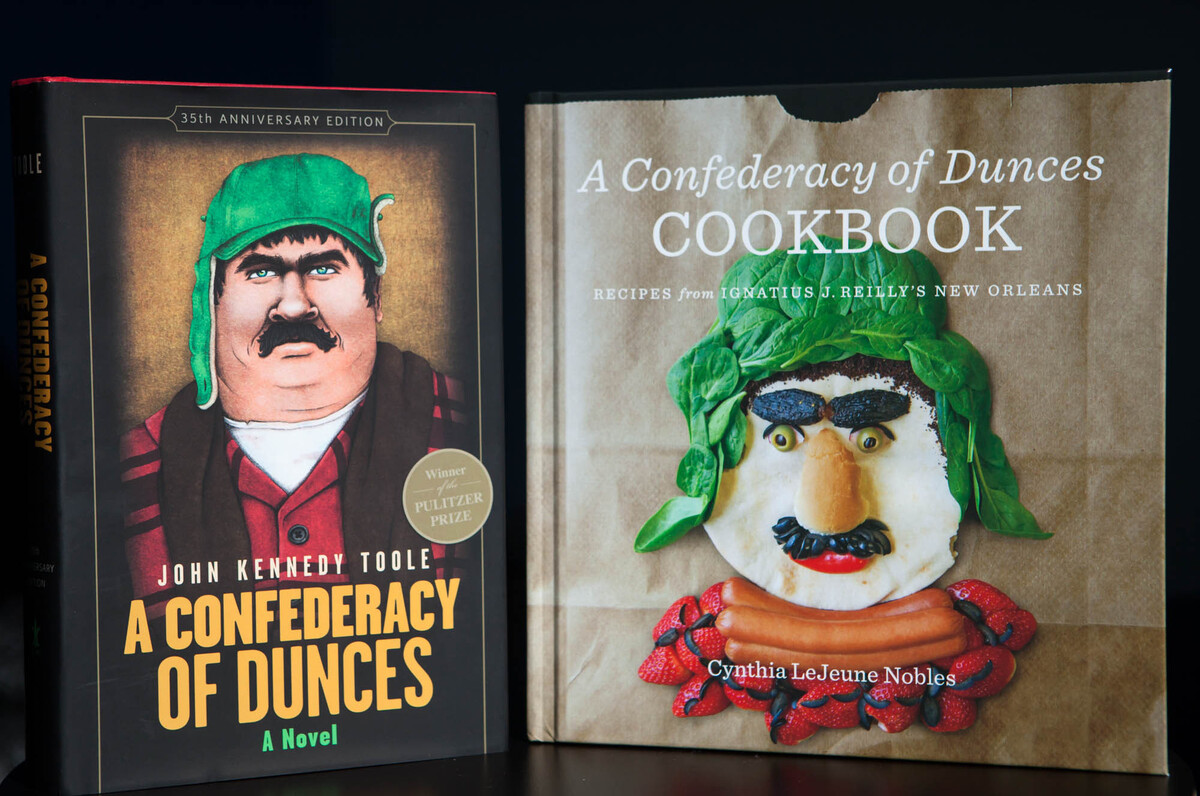 A Confederacy of Dunces has been called a love letter to New Orleans and hailed as a modern comedic classic. Now, a new cookbook looks at the food and culture that help define the characters in the Pulitzer Prize-winning book.

Set in New Orleans in the 1960s, the novel centers around Ignatius J. Reilly, an over-educated, rotund 30-year-old who lives with his mother in a tiny house and goes about ranting against the modern world while selling hot dogs from his pushcart.

"He also likes to eat," says Cynthia LeJeune Nobles, a food history writer, columnist for the Baton Rouge Advocate and author of A Confederacy of Dunces Cookbook. The book offers recipes for the fare of Ignatius and his cohorts.

Indeed, Ignatius is a glutton in a city known for its legendary cuisine. And food becomes another character in this observational satire — along with other oddball, "starkly colloquial" characters defined, in part, by their eating habits. That includes a Sicilian grandmother, a Cajun widower and an exotic dancer who eats canned Spanish rice and wine cakes.

"That's an old pastry that goes back to the 1800s — it's sort of like a little pound cake, soaked in alcohol and topped with a cherry. It's delicious," Nobles explains to Morning Edition's Steve Inskeep. Wine cakes, she says, were originally a holiday dish invented by the French — one of several distinct cultural influences on the city's cuisine. 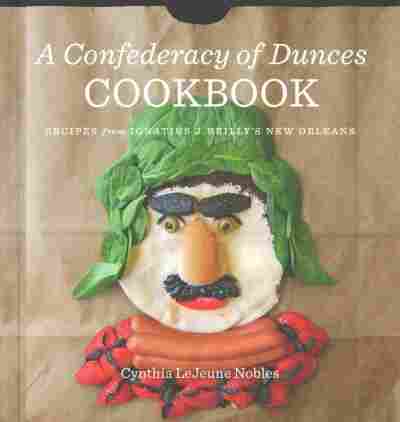 A Confederacy of Dunces Cookbook

Nobles' cookbook also includes recipes for daube, a braised cut of tough beef roast. The French version is usually stuffed with pork fat and baked for many hours, Nobles explains. The Italian version, she says, is stuffed with garlic and "plopped inside a big pot of what we call 'red gravy' down here" — red marinara sauce, and it "cooks for hours and hours, because it's a tough piece of meat." Served over spaghetti, the dish is a Creole-Italian masterpiece, she writes.

"There were some wealthy people here in the 1800s," she says, "but the majority of the population certainly was not — especially since we had such a huge immigrant population. So there were lots of people not too wealthy here, and they learned to make do with what they had."

Another make-do cake in the cookbook is something called Russian Cake — basically, scraps of doughnut, pie and cake mushed together with alcohol and a sugar sauce, with frosting on top, Nobles explains.

The name Russian Cake, she says, refers to its purported backstory: "A baker needed to make a dessert for a Russian ambassador who visited New Orleans in the early 1900s, and he didn't have the ingredients, so he just threw everything together with this alcohol, and he came up with Russian Cake." Sounds like a story too good to verify? "That's right," she says, laughing.

Author John Kennedy Toole never knew how beloved A Confederacy of Dunces would become. He penned the novel as a young man in the 1960s but struggled to find a publisher. In 1969, he committed suicide. The book was not published until 1980, largely through the persistence of his mother.

Did Nobles feel obliged to read and reread the novel while writing the cookbook?

"I did," she says. "I understand what Toole was trying to do. He was trying to tell the world what New Orleans was at the time, and what kind of people lived here, and how they were so different from other places. And New Orleans really is a different city, in a very good way."

Jelly doughnuts are one of Ignatius' favorite foods in the book. Here, Nobles shares her recipe. 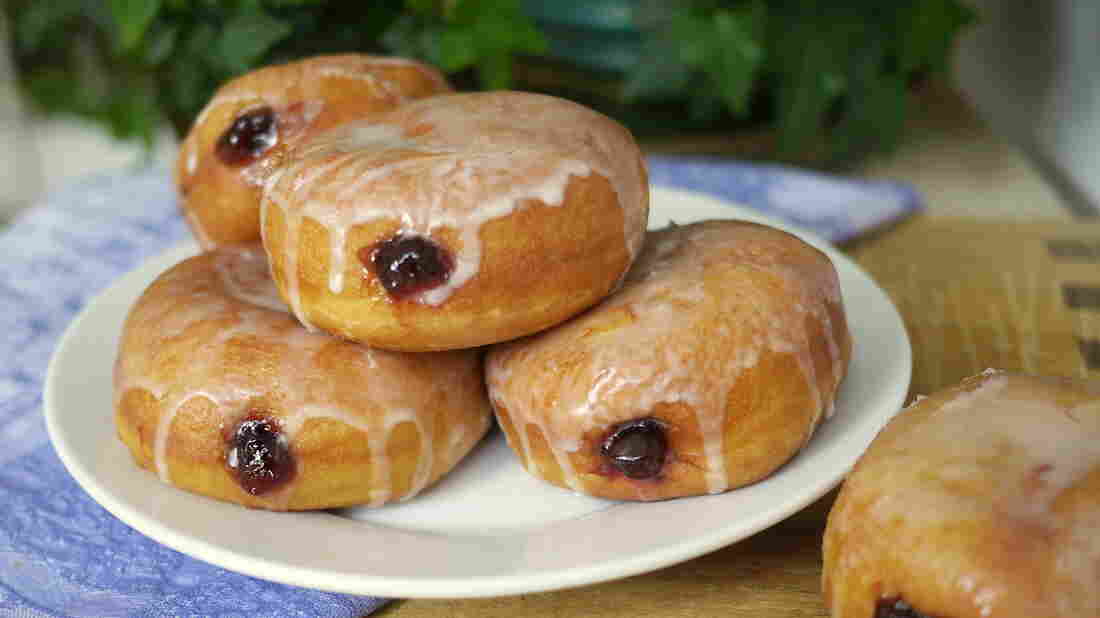 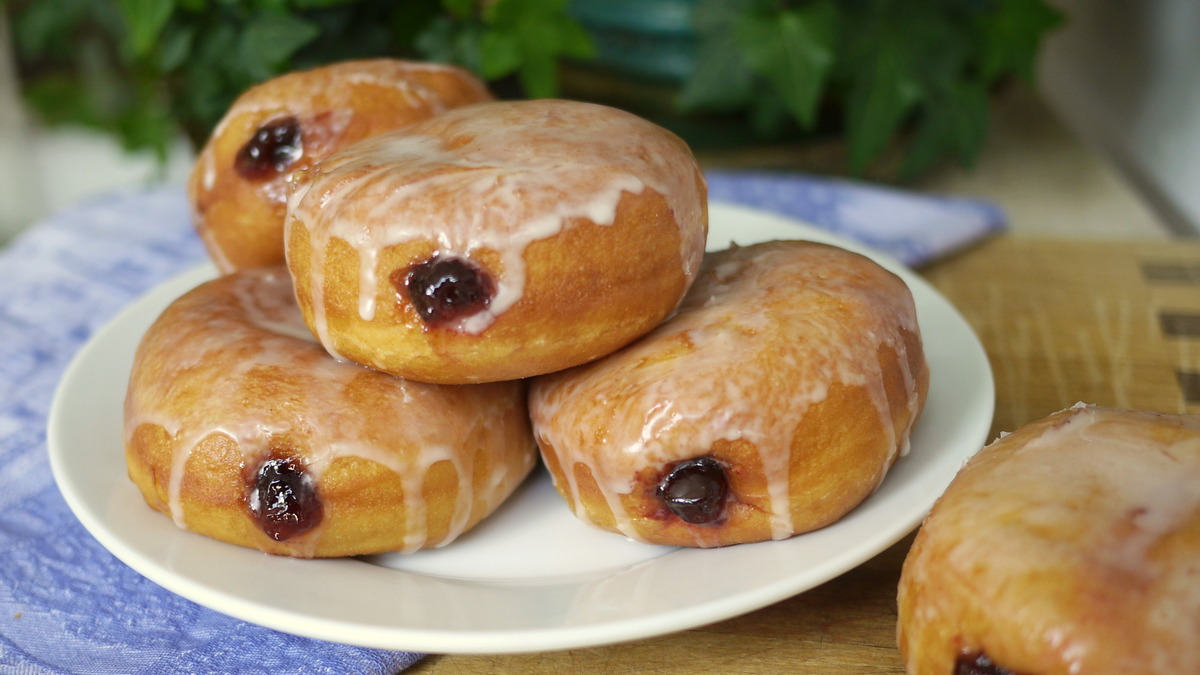 The earliest known recipe for a jelly-filled doughnut traces back to Germany, where instructions for making Gefüllte Krapfen was published in 1485 in the cookbook Kuchenmeisterei (Mastery of the Kitchen).

The following recipe is simpler than it looks, requiring only a total 21/2 hours rising time, and the dough can be made up to 12 hours ahead of frying. The result is a yeast-raised doughnut as light as any you'll find at a bakery.

1. Make starter: In a medium bowl, dissolve yeast and sugar in warm water. Stir in bread flour and milk powder. Cover bowl, and allow to sit in a warm place 30 minutes.

2. Make dough: In the bowl of a standing mixer, combine yeast, warm water, and milk powder. Stir in starter; then stir in sugar, eggs, butter, and nutmeg. Using mixer bread paddle on low speed, mix in flour and salt. Knead on medium-low speed 7 minutes. Dough should be very soft and sticky. Place in a large greased bowl. Com­pletely cover surface with plastic wrap, and allow to sit in a warm place 30 minutes.

3. To make sure all dough surface is covered, remove plas­tic from dough and replace plastic again. Refrigerate 1–12 hours.

5. Heat 3 inches vegetable oil in a fryer or Dutch oven to 350°F. Using a thin-bladed spatula, drop doughnuts into oil, without crowding, and fry until golden on both sides, about 5–6 minutes total, flipping often. Drain on paper towels.

6. Allow doughnuts to cool 10 minutes. Stir jelly until smooth and scoop into a pastry bag fitted with a large, plain tip. With the tip, poke a deep hole through the side of each doughnut and squeeze in 2 tablespoons jelly.

7. Make glaze: In a shallow soup bowl, mix together confec­tioners' sugar, water, and vanilla until smooth. Dip tops of doughnuts in glaze, and set on a wire rack to firm up, about 15 minutes. Serve immediately.

Reprinted from A Confederacy Of Dunces Cookbook by permission of LSU Press.