Accessibility links
Vegetables Under Glass: Greenhouses Could Bring Us Better Winter Produce : The Salt The U.S. doesn't grow many vegetables indoors. We have California, Arizona and Latin America to supply us in winter instead. But entrepreneurs are betting on greenhouses to supply more fresh food. 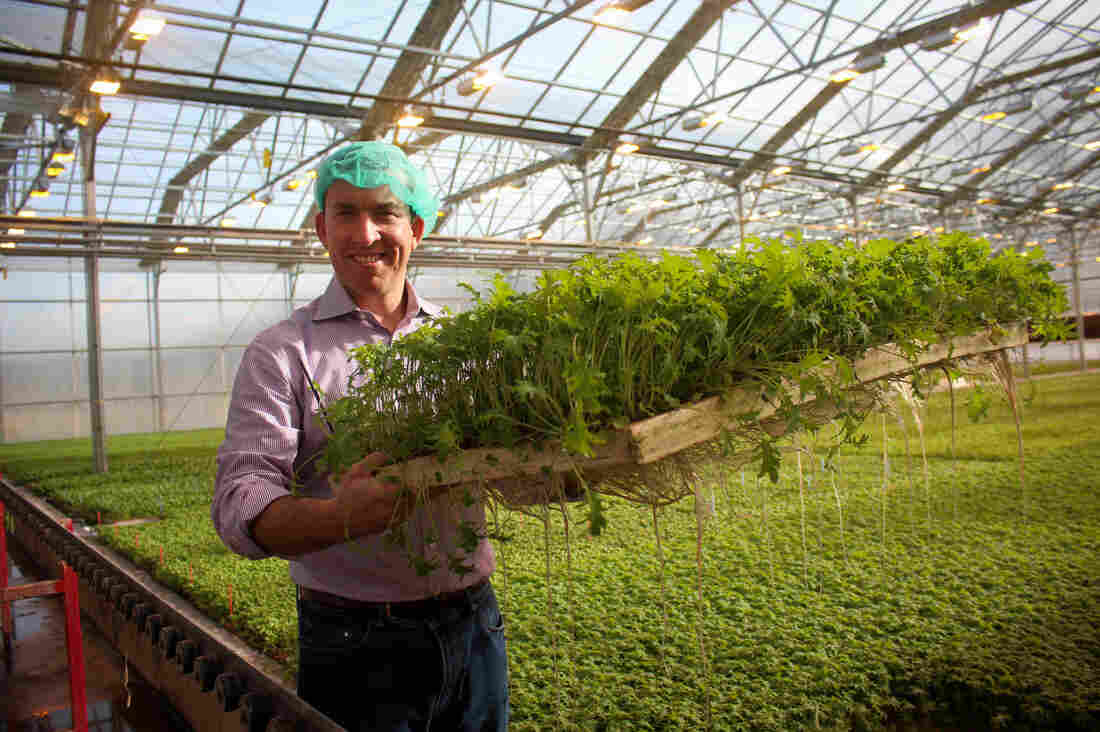 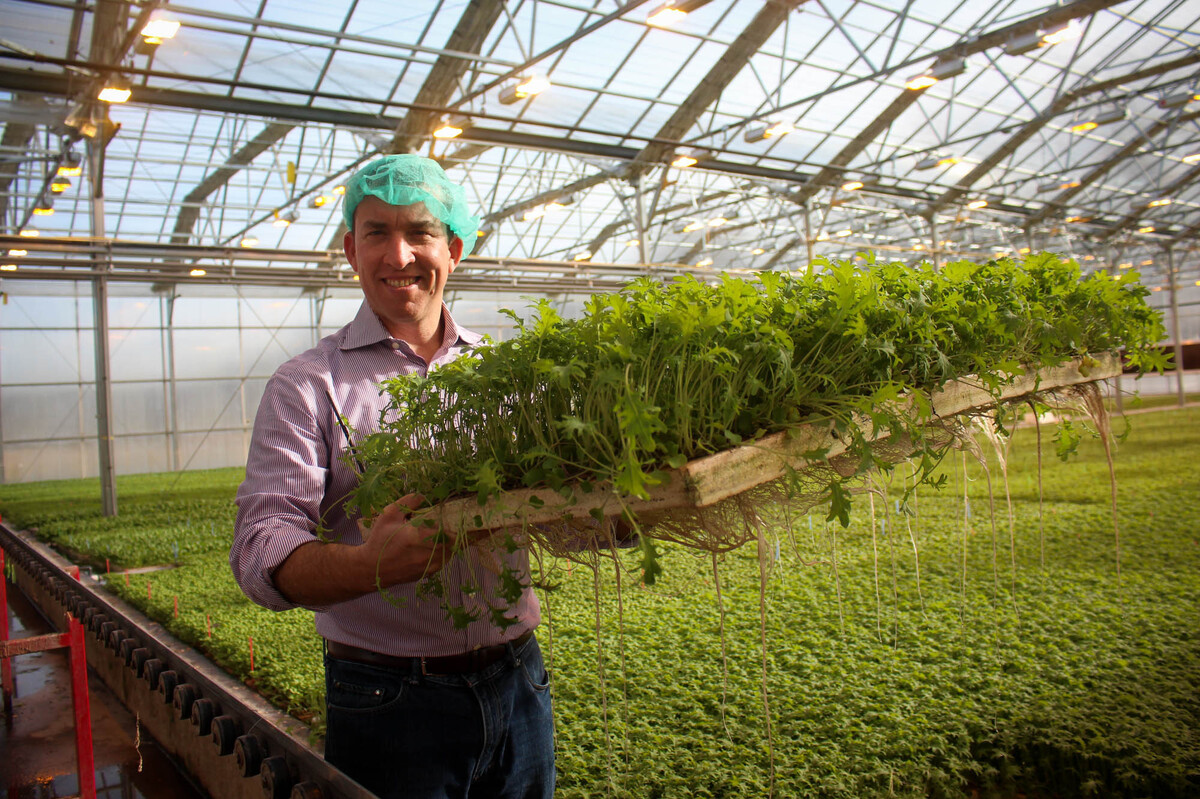 In America, our food options are remarkably unaffected by the changing seasons. We just keep eating salad greens and tomatoes without regard to the onset of winter.

In most of the country, there's little chance that the greens we eat in the late fall and winter are locally grown.

But if there were greenhouses nearby, they could be. And in a small but growing number of places, local greenhouses are there.

It's a gray, chilly, fall day when I visit. But when I step inside the greenhouse, I feel the warmth of sunlight that's been trapped by its glass walls and ceilings.

In front of me, there's a sea of green: more than an acre of baby salad greens.

"It looks like a field of lettuce. It's actually a field of boards, with lettuce growing on them," says Paul Lightfoot, founder and CEO of the company BrightFarms, which owns the greenhouse.

The plants and the boards are all floating on ponds of water. The green plants grow out of slits in the boards, while roots extend down below, into the water. 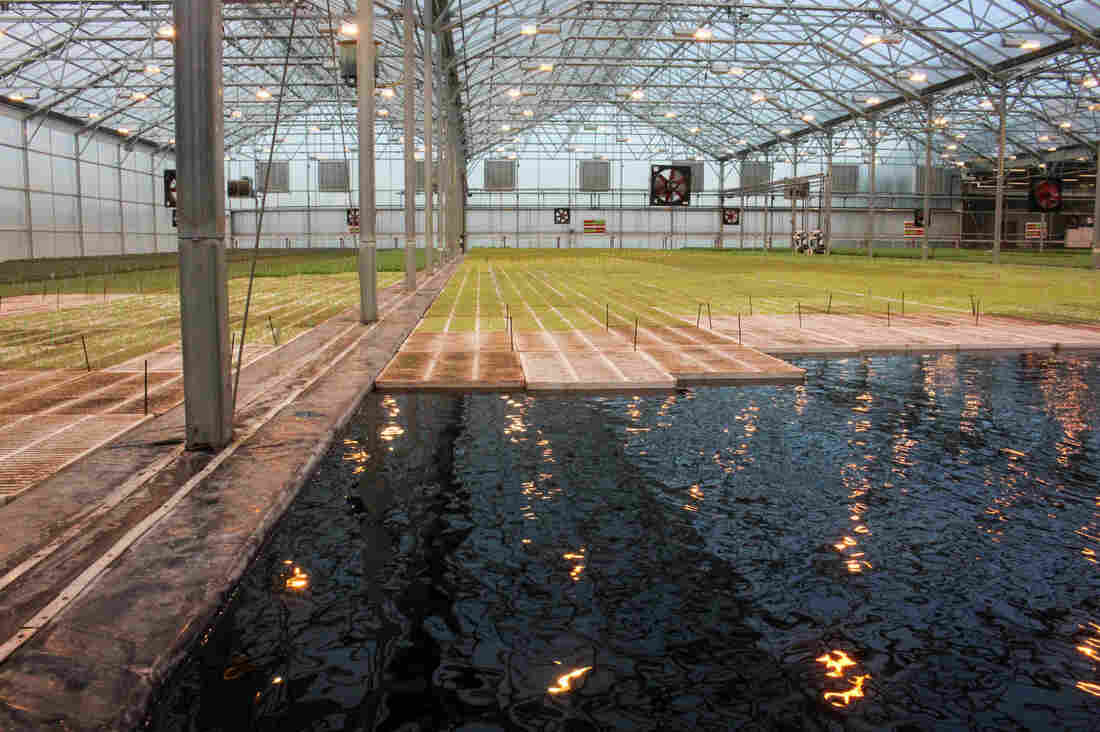 In the BrightFarms greenhouse, salad greens grow on floating boards. Their roots extend into the water, where they get nutrients. Dan Charles/NPR hide caption 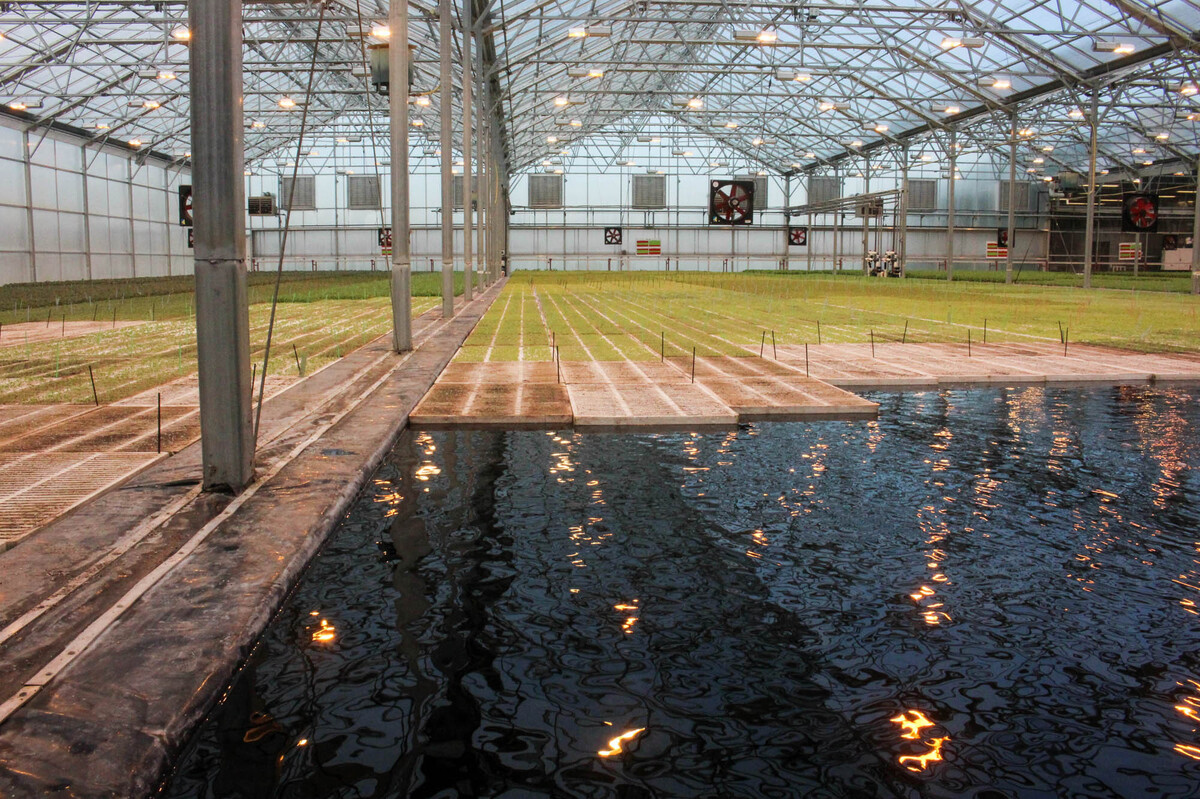 In the BrightFarms greenhouse, salad greens grow on floating boards. Their roots extend into the water, where they get nutrients.

The plants are fed a precisely balanced diet of nutrients through the water. They get energy from the sun, and that's supplemented this time of year with overhead lights.

What's most remarkable is how fast they can grow under such conditions, with optimal temperatures and lighting. These plants go into the pond as pale seedlings, so tiny you can hardly see them. Thirteen days later, they will be baby kale, ready for harvest.

Some countries grow a lot of their vegetables in greenhouses. In the Netherlands or Canada, you can find vegetable greenhouses that cover 100 acres.

But they're rare in the U.S. And the reason for this is simple.

We have easy access to such fields in the temperate-climate states of California and Arizona. Mexico, with its vast and expanding fields of fresh tomatoes, is right next door, and farms in Central and South America aren't far away, either. It's easier and cheaper to ship vegetables across the country than to grow them in local greenhouses.

Lightfoot, though, is betting that the future of vegetables, starting with salad greens and fresh tomatoes, lies indoors.

To show me why, he drives me to a nearby supermarket, McCaffrey's, in the borough of Yardley. It's selling his products. 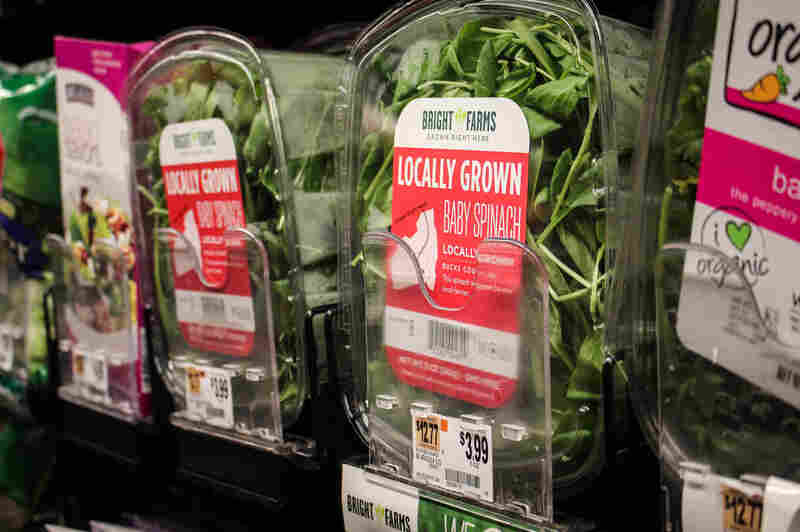 Salad greens grown in a BrightFarms greenhouse on sale at a nearby McCaffrey's grocery store. Dan Charles/NPR hide caption 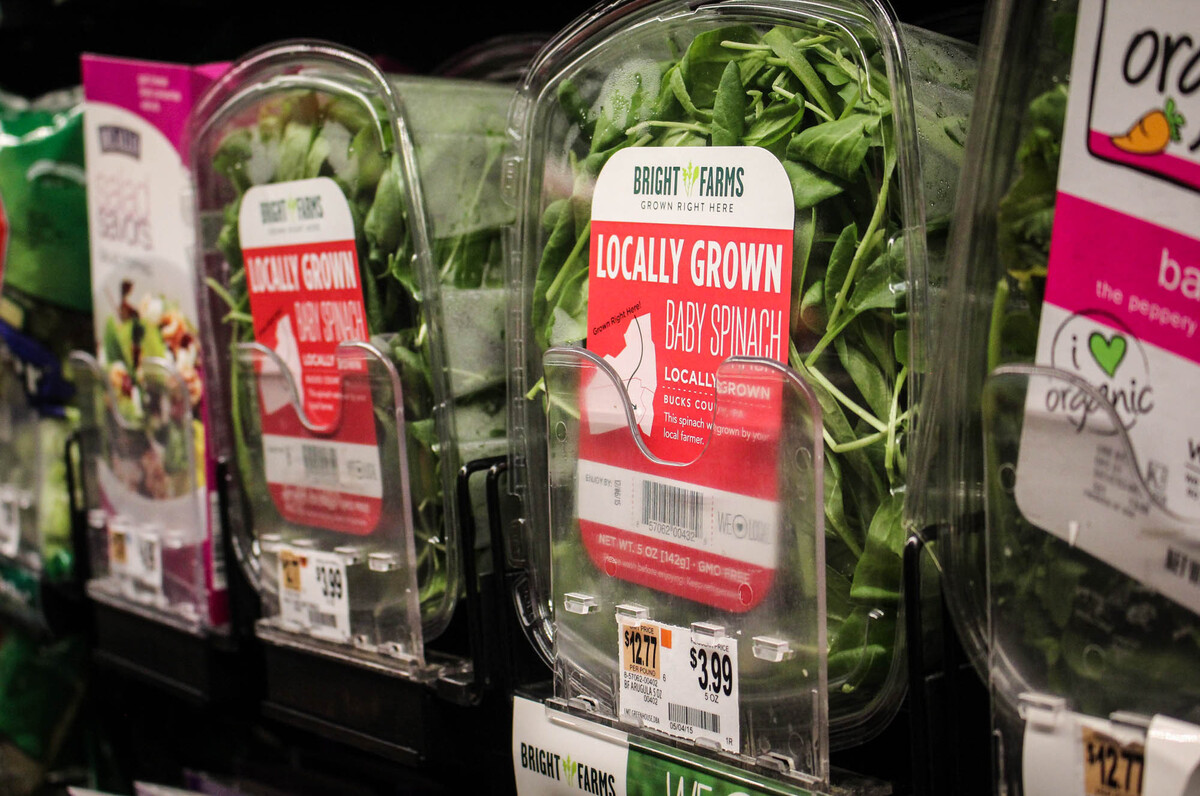 Salad greens grown in a BrightFarms greenhouse on sale at a nearby McCaffrey's grocery store.

Lightfoot pulls a package of BrightFarms arugula off the shelf and checks the expiration data. "This has about nine days left," he says. These greens came from his greenhouse just a few days ago. Printed on the package, in big letters, are the words "Locally Grown."

Next to them is the competition: organic salad greens that almost certainly came from California or Arizona.

There's no difference in price. But some of that long-distance arugula and spinach looks a little wilted from that trip across the country.

This is part one of Lightfoot's sales pitch. "You can see the difference in freshness. So it's going to taste better. It's going to last longer in the refrigerator," he says.

The second part of Lightfoot's pitch for local greenhouses is environmental.

Those fields in California and Arizona are in deserts, he says. The water they need is increasingly scarce. Most greens, for instance, come from the Salinas Valley in California, and farms there rely primarily on irrigation water from underground aquifers. Up to now, farmers have been able to pump an unlimited amount of water from their wells.

"In the United States, we just realized that we didn't have endless land and water a few weeks ago, almost," Lightfoot says.

Modern greenhouses require much less water — as little as 5 percent as much water as open-air field production.

Yet outside experts say that the case for greenhouses isn't quite so convincing in all respects.

They say that greenhouses do take less water but require extra heat and light during cold and dark parts of the year. And that usually comes from burning coal or gas. This adds to that global greenhouse effect.

Neil Mattson, a greenhouse expert at Cornell University, has calculated that growing lettuce in greenhouses in New York state can release twice the amount of climate-warming gases as growing lettuce in California — even when you consider the fuel burned to ship it across the country. "It's not so good, and that's the status quo," says Mattson.

But he says those numbers may improve, as better lighting and heating technologies come online. And even though growing vegetables in greenhouses is usually a bit more expensive than open-air production, Mattson does agree that indoor farming's key advantage — the freshness of its produce — may outweigh cost for many consumers.

That's why the number of vegetable acres under glass in the U.S. is rising. From 2007 to 2012, the amount of land devoted to greenhouse production of vegetables in the U.S. increased by more than 50 percent. Mattson regularly hears from entrepreneurs who are interested in getting into this business, and are looking for advice.

"I think it really has legs," Mattson says. "Ultimately it will depend on how robust consumer demand is for fresh, local, food."

According to Lightfoot, that demand is booming.

"The demand is way higher for this product than our capacity right now," he says. "There's no limit right now. We're raising the capital, and we're building two other greenhouses that are much bigger than this."

Those greenhouses are outside Washington, D.C., and Chicago. The one near Chicago will take advantage of waste heat from a nearby ethanol plant, cutting its energy consumption drastically.

Right now, BrightFarms is growing salad greens, basil, and tomatoes. Down the road, Lightfoot says, his greenhouses could diversify into cucumbers, peppers, and strawberries — anything, he says, in which a local product looks and tastes a lot better than one trucked in from far away.