Accessibility links
As More Israelis Go Vegan, Their Military Adjusts Its Menu : The Salt About 5 percent of Israel's population is vegan. In a nation where military service is compulsory for most people, that's prompting the military to offer animal-free diets and clothing to soldiers.

As More Israelis Go Vegan, Their Military Adjusts Its Menu

As More Israelis Go Vegan, Their Military Adjusts Its Menu 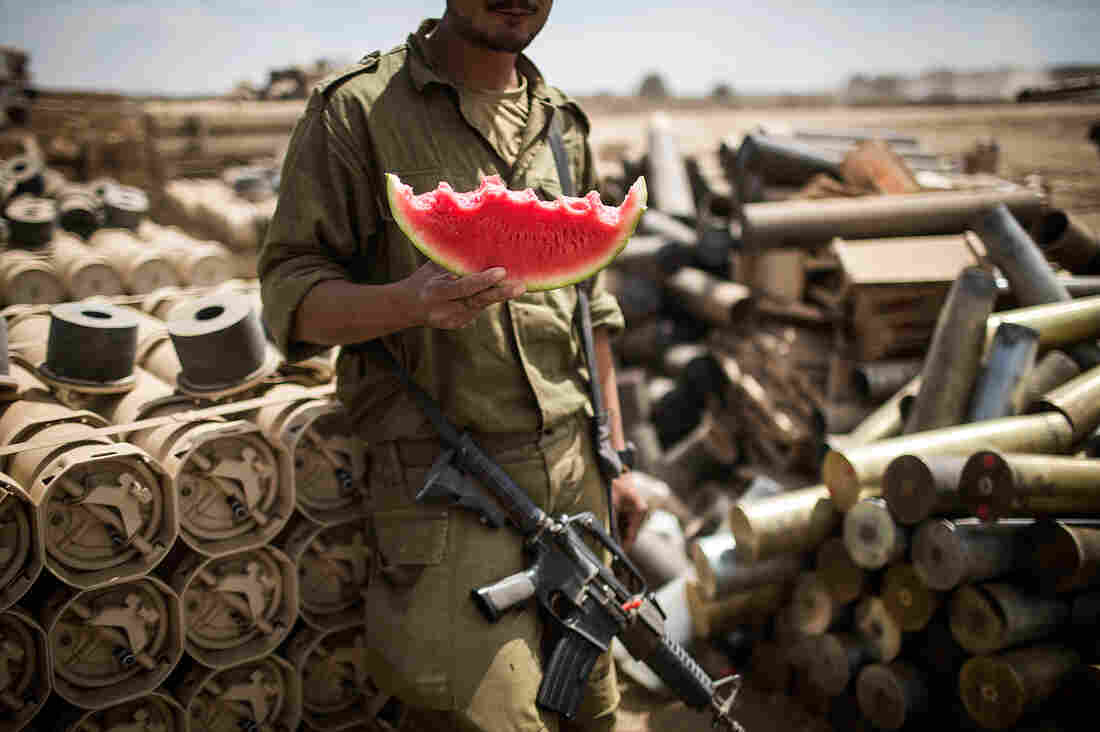 An Israeli soldier eats a piece of watermelon near Israel's border with the Gaza Strip in 2014. As more Israelis go vegan, the country's military has made dietary and clothing accommodations for soldiers. Ilia Yefimovich/Getty Images hide caption 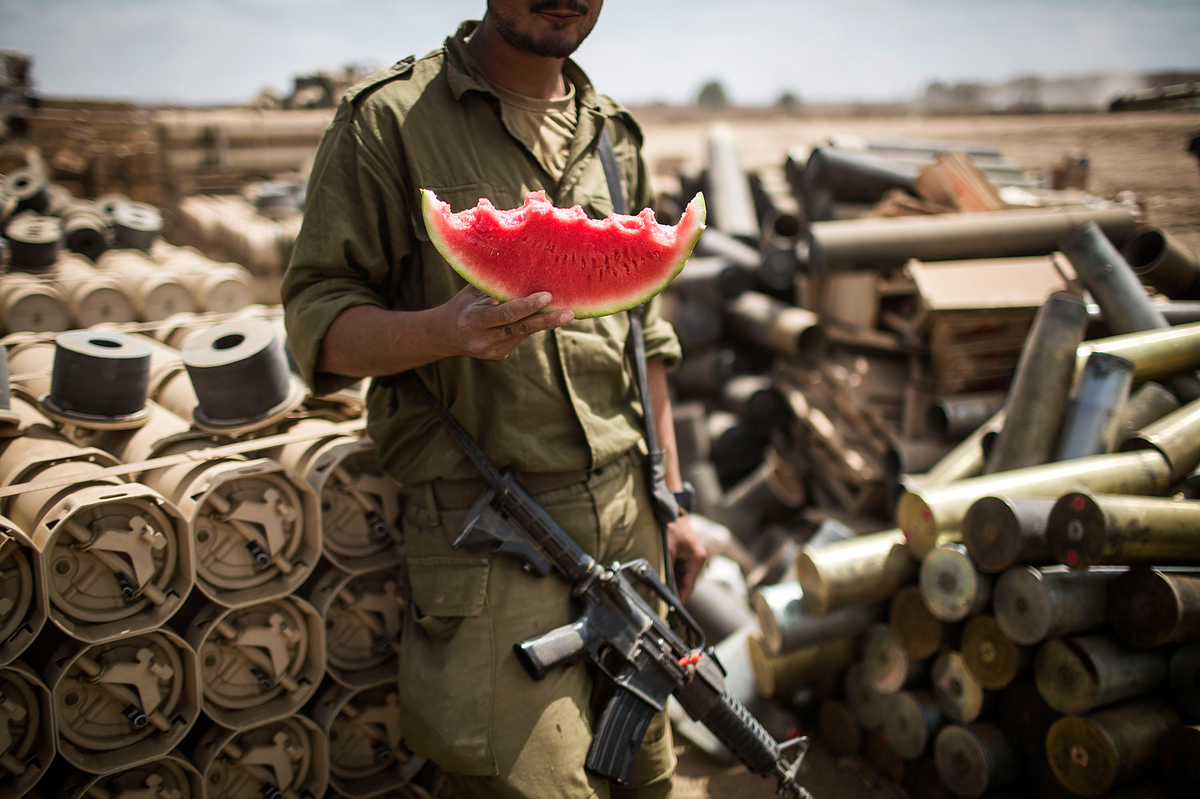 An Israeli soldier eats a piece of watermelon near Israel's border with the Gaza Strip in 2014. As more Israelis go vegan, the country's military has made dietary and clothing accommodations for soldiers.

Omer Yuval was an Israeli reserve soldier when, in the midst of Israel's summer war with Hamas in 2014, he ended up stuck on a base for nearly seven weeks. He had only recently become vegan for health reasons, and he quickly noticed that his options were limited at mealtimes.

"I just had to live on salads and order food from outside the base, using my own money," Yuval says. "I really couldn't manage. Nutrition for vegans came only from side dishes."

Yuval had one visit home during that time, and he managed to bring back some foods, like nuts, beans and tofu. He kept them in a closet in the room he shared with seven other soldiers, but it was not enough.

After the war, Yuval, 27, realized there were likely thousands of other vegan soldiers who were suffering from inadequate nutrition. About 5 percent of Israel's population is vegan, among the highest rates in the world. In a nation where military service is compulsory for most people, this means ever more vegans in uniform.

So Yuval drafted a letter to the army requesting more vegan meals, more nutritionally balanced food without animal products, vegan options for prepared sandwiches, and less bureaucracy in recognizing a soldier as vegan. The note included suggestions, such as adding hummus and soy milk to breakfast, quinoa to lunch and avocado to sandwiches.

"This letter is not a demand or hint for easing of the military service," the note read. "To the contrary, this letter aims to create equal rights and opportunities to allow for the vegan soldier to maintain a lifestyle that will enable him to perform every task assigned to him and to serve the country the best he can, whether in compulsory, career or reserve service."

The Israeli military, it turns out, was surprisingly eager to help. A military spokesman tells The Salt that vegans serve in all capacities, including as combat soldiers. Vegan soldiers wear wool-free berets and leather-free boots, and they get an additional stipend to supplement their food, the military says.

What's more, the Israel Defense Forces "is currently working on creating a complete meal plan for vegan soldiers who serve on closed bases," the spokesman tells us via email. Soldiers will get extra plant-based products for breakfast and lunch, "as well as supplementary vitamin packs to ensure that the soldiers receive all the necessary nutrients."

The army follows a number of other Israeli institutions to accommodate vegans.

In November 2014, the cafeteria for the Knesset, Israel's parliament, began offering two to three vegan options daily, with extras on Mondays, according to spokesman Tal Vider.

And in 2013, Israeli Prime Minister Benjamin Netanyahu declared that his residence would also commit to "Meatless Mondays" — though a spokesman in Netanyahu's office could not confirm whether the program was ongoing.

According to Israeli media reports, veganism is on the rise among Arab citizens of Israel as well.

Even Domino's Israel has joined in, serving more than half a million vegan pizzas in 2014.

Yuval says the army has indeed changed in the past year, in no small part because of efforts like his. There are more vegan options at lunch, but he says there is still more to be done for breakfast, dinner and sandwiches.

In Israel, the fierce embrace of veganism has not been without controversy. Among the vegans in Israel are the founders of the radical 269 movement, whose members stage publicity stunts — including branding themselves, leaving severed cattle heads in public places, and "liberating" animals from farms. The Hebrew-subtitled version of an incendiary speech by U.S. animal rights activist Gary Yourofsky, who compares the meat and dairy industries to the Holocaust, has received more than 1 million views. Yourofsky raised eyebrows for speaking at an Israeli settlement during a visit in 2013.

"I don't care about Jews or Palestinians, or their stupid, childish battle over a piece of Godforsaken land in the desert," Yourofsky told +972 Magazine at the time. "I care about animals."

While many vegans do comply with Israel's near-universal draft for Jewish citizens, some say serving in the Israeli army violates the same morals that drove them to avoid eating animal products.

Haggai Matar, a vegan and a journalist in Tel Aviv, spent two years in prison as punishment for refusing the draft in 2002. He said he did not understand vegans who participated in what he sees as Israel's abuse of Palestinian rights.

"It's absurd that combat soldiers can feel very bad about hurting animals, but they have no problem to drop bombs on Gaza and kill hundreds of people," he says.

Matar, 31, says military prison had few vegan options, but his parents brought him soy chocolate milk, and he and other vegan prisoners were often allowed access to the prison kitchen.

Law professor Aeyal Gross of Tel Aviv University warned in 2013, in the liberal Israeli daily Haaretz, against "veganwashing," or using Israel's vegan-friendly face as a mask to cover up what he sees as human rights violations.

Yuval, the soldier who pushed for vegan food in the army, says not all vegans are pacifists.

"We are fighting terror organizations," he says. "I believe that the vegan reform in the IDF is paving the way for an even more moral army."

Daniella Cheslow is a journalist based in Tel Aviv who covers international news, food and the environment.