Accessibility links
From Tipsy To Regret: Your Tales From The Office Holiday Party : The Salt Office soirees can be an opportunity for networking and workplace bonding. But drinking with the boss can also lead to embarrassment, injury and litigious outcomes, as the stories you shared bear out. 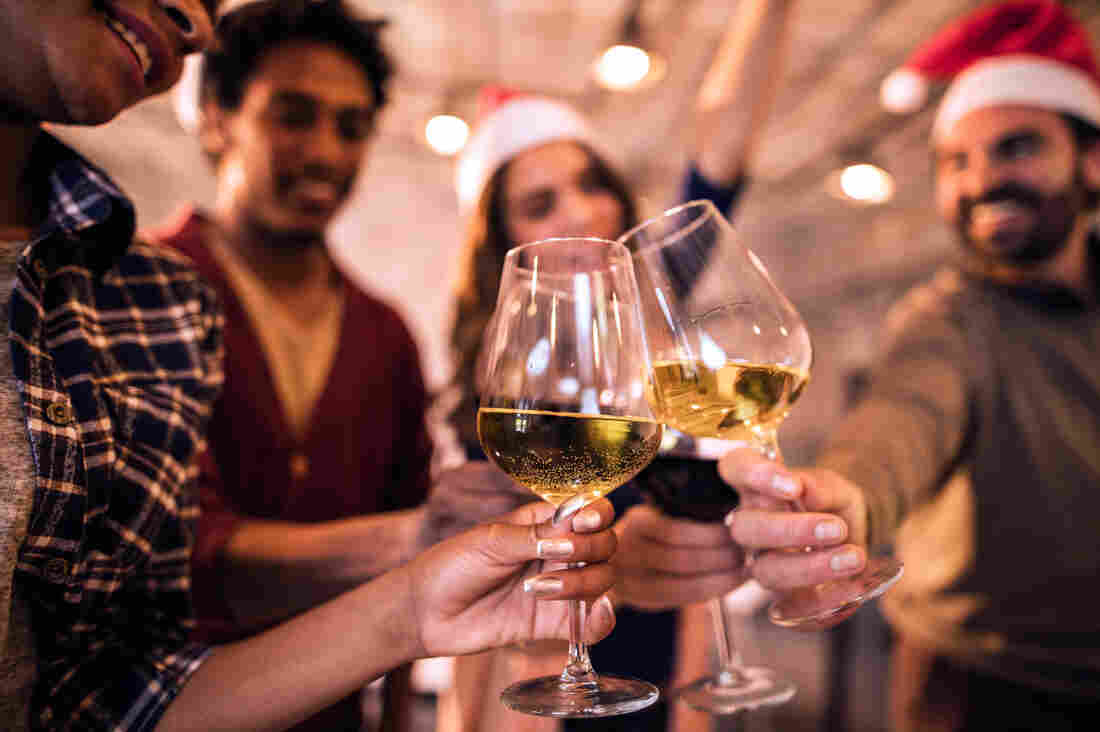 Drinking with co-workers can be festive — and fraught. In an informal survey of Salt readers, 25 percent of you told us you'd gotten tipsy enough to regret it at an office party, and 80 percent said you'd seen a co-worker overdo it, with embarrassing results. iStockphoto hide caption 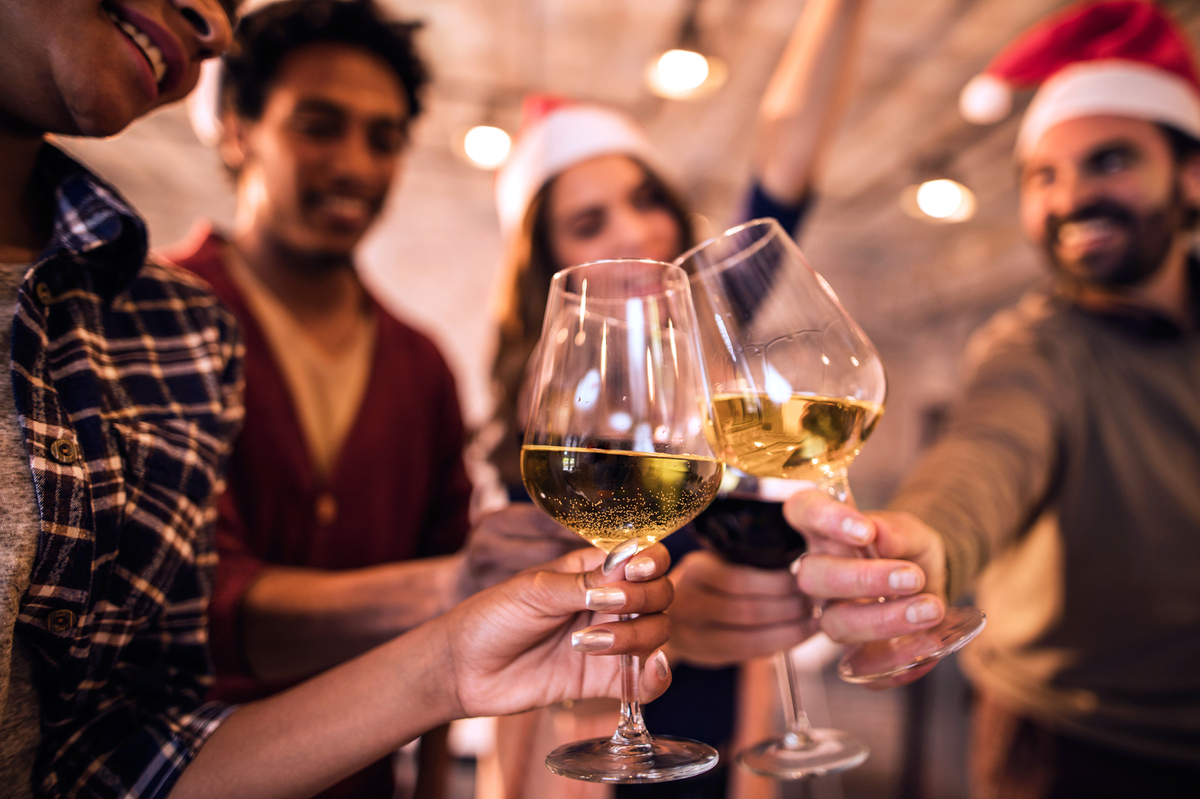 Drinking with co-workers can be festive — and fraught. In an informal survey of Salt readers, 25 percent of you told us you'd gotten tipsy enough to regret it at an office party, and 80 percent said you'd seen a co-worker overdo it, with embarrassing results.

A few days ago, we offered up some tips for playing it cool at the office holiday party. And we asked for your stories.

We got about 8,400 responses to our informal survey. It turns out, about 1 in 4 of you revelers acknowledged getting too tipsy at an office soiree — and later regretting your behavior. Perhaps not surprisingly, 80 percent of you said you've seen co-workers embarrass themselves after overimbibing.

"I do think, sometimes, employees forget that the office rules apply at an office party," says Nigel Wilkinson, a partner in the firm Manatt, Phelps & Phillips' Washington, D.C., office.

The events that unfold at office parties can lead to litigious outcomes, Wilkinson tells us. "The most typical [are] sexual harassment claims," he says, adding, "but the relaxed atmosphere can lead to racist jokes, or an employee can injure themselves or injure someone else. ... I've seen all of these."

Some of you told us you have, too: "All I'm going to say is that once you've had to be deposed under oath about what happened at the office party, you pretty much give up drinking at them. Or, in my case, even attending them," one respondent wrote.

Of course, these are extreme cases. Far more typical is the kind of behavior that's not dangerous but simply embarrassing.

"One of the things alcohol impairs is our ability to recognize our own impairment," says Maurice Schweitzer, a professor at the University of Pennsylvania's Wharton School. He has studied how alcohol influences negotiations and professional dealings.

When we dip our cup in the punch bowl one too many times, "we tend to think that [we're] more funny, more entertaining than we actually are," he says.

And many of the tales you shared illustrate this point.

"Fell into the band's loudspeaker during an emotional, yet crowd-pleasing version of 'Frosty the Snowman,' " said another.

But many of you also told us that you'd learned your lesson. And about 1 in 3 respondents said they view the office party as an opportunity to do some career-advancing networking.

"Stuck to one cocktail and had a responsible, grown-a** lady good time," wrote one survey taker. "Thanked myself when my boss sat down next to me!"

After all, there can be an upside to the festive atmosphere that comes with a little rum punch or spiked eggnog. As Schweitzer notes, drinking is "a social ritual. It can bond us together." And he says that feeling of bonding — of being part of a group — can open up new professional opportunities.

"The way we mix our social lives and our work is essential for how we advance in our work," Schweitzer says.

So as you blend work and play, Schweitzer says, the goal is to strike the right balance.

Or, as another survey taker told us, "I was given one invaluable piece of advice when I joined the 'corporate world': Don't be the next day's story."

Here's a sampling of some of your tales of drinking at the office party, edited for clarity and brevity. We didn't ask for names — I think we can all agree it's better that way:

"One party 20+ years ago served a delicious white wine. To remain svelte in my fitted dress, I skipped the hors d'oeuvres and just visited the wine station. I did not realize until far too late that I had over-indulged. Thankfully, someone else drove, but we had to make several stops on the way home as I paid for my vanity and foolishness. So great was my embarrassment that I skipped the party the following year."

Too Close For Comfort

-- "I had three co-workers who lost their jobs due to behavior at an office holiday party, which they most likely wouldn't have engaged in if they hadn't been drinking. Let's just say they were discovered in a restroom, and they weren't resting."

-- "When my husband and I were still dating, one of his co-workers kept hitting on me the whole night at their Christmas party; it was cute at first, but the more he drank, the more advanced it got. ... I think he forgot it wasn't a frat party and we weren't in college anymore."

Letting A Little Too Loose

-- "It was open bar. I got so drunk that I smoked half a pack of my friend's cigarettes (I don't smoke). I also confessed to my best friend/co-worker that I was in love with him."

Even The Boss Has To Watch It

-- "My former boss got very drunk at a Christmas/my birthday party. She told my date that he was stupid. She used foul language in front of my mother. And said inappropriate things to my 15-year-old daughter. No, she didn't make it to work the next day."

-- "Use every excuse you can to get out of it! Unfortunately I'm the boss now, have to set an example. If there was any fun in them, now it's gone."

-- "At our company Christmas party last year, one of my co-workers had a little too much and face-planted on the dinner table. Ouch."

-- "Welp — one time I had a little too much and knocked over the Christmas tree. I'll never live that one down!"

On Boozing And Bonding

-- "Got into a bottle of 15-year-old single malt with some partners in the firm. All the camaraderie built up was squandered by not making it to the annual firm meeting in the morning."

-- "At an office party four years ago, a fellow co-worker brought eggnog that contained whiskey, Scotch, as well as bourbon. ... It was delicious and the booze was nigh-undetectable. Everyone became incredibly sloshed. ... As the night progressed, someone made a makeshift slip-and-slide in the warehouse that was quite fun until the IT guy of the office broke his collarbone going face first and 911 was called. We still talk about this office party to this day."

"I used the holiday party as an opportunity to connect with a hiring manager who had a position that interested me. I carried a glass of wine as a prop but drank water. This strategy must have worked in my favor, because I did receive an interview."