Accessibility links
Movement To Pay It Forward With A Cup Of Coffee Spills Into U.S. : The Salt The idea behind Suspended Coffees: Buy a cup of coffee in advance for a stranger who couldn't otherwise afford it. The movement took off in cafes across Europe. It's now finding its legs in the U.S.

Movement To Pay It Forward With A Cup Of Coffee Spills Into U.S.

Movement To Pay It Forward With A Cup Of Coffee Spills Into U.S. 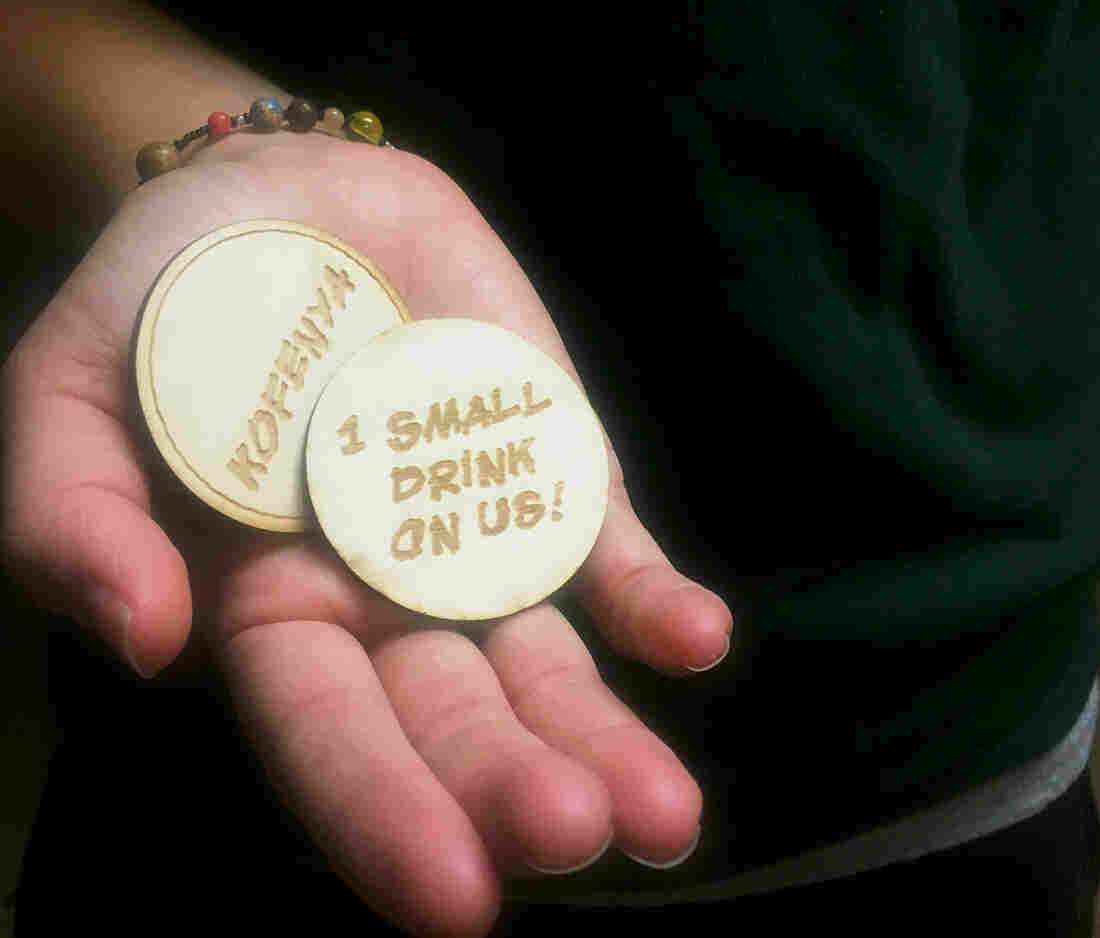 Kofenya Coffee in Oxford, Ohio, has been operating a token-based pay-it-forward scheme for around six months. Customers pay for a cup of coffee in advance for a stranger. Courtesy of Tim Stiffler-Dean hide caption 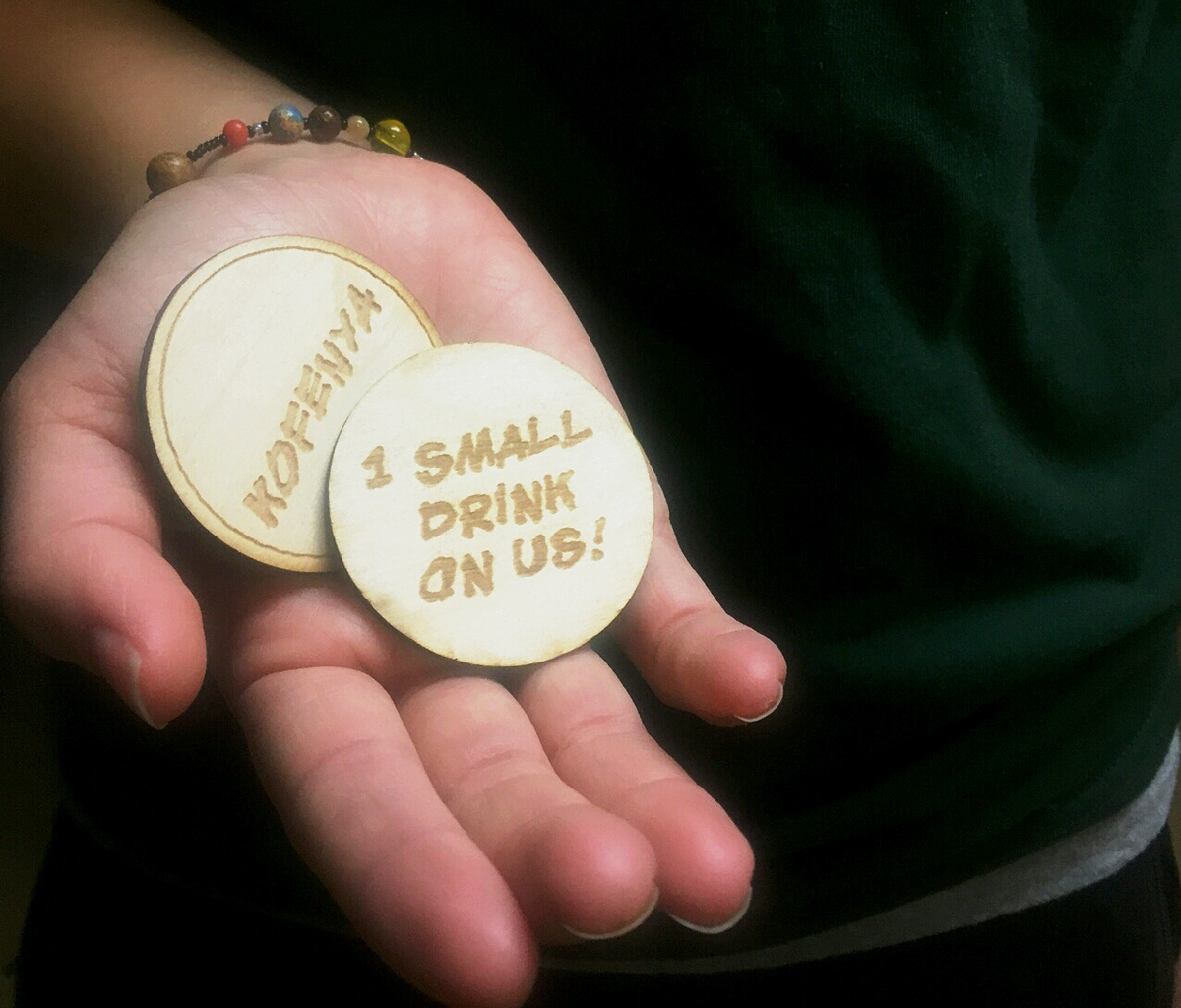 Kofenya Coffee in Oxford, Ohio, has been operating a token-based pay-it-forward scheme for around six months. Customers pay for a cup of coffee in advance for a stranger.

On March 27, 2013, John Sweeney, a plumber from Ireland, started a Facebook page called Suspended Coffees. His message was simple: Buy a cup of coffee for a stranger, because an act of kindness can change a life. Eight hours later, the page had attracted more than 20,000 likes.

Suspended coffee, or caffe sospeso, is a tradition that comes from Naples, Italy, and dates to at least the turn of the 20th century. When customers buy coffee, they also pay in advance for a cup to be given to somebody else -- usually someone who otherwise couldn't afford it.

As The Salt has reported, the idea of "paying it forward" with a cup of coffee experienced a revival across Italy in 2011. That's when Neapolitan authorities introduced an official "Suspended Coffee Day" to be celebrated each December. The previous year, a group of small Italian festivals had set up the Suspended Coffee Network to encourage community and solidarity in response to state budget cuts in the cultural sector.

Two years later, Sweeney heard about the concept from a friend who'd come across it at a cafe, and it inspired him to promote suspended coffee on Facebook. As the page went viral, he found himself at the center of a modern movement in Europe and quickly became an English-language spokesman for the cause. To date, Sweeney's Suspended Coffees page has inspired the purchase of over 15 million coffees for strangers in 34 countries, according to data he has collected.

"It's grown bigger and bolder than I ever imagined it would. New cafes are still signing up and joining the movement every day," he says. "Less than a year after starting the page, we had over 250,000 followers on Facebook and a website continually generating tens of thousands of hits. The message that kindness matters has connected with people across the globe."

Though spontaneously occurring pay-it-forward chains at coffee shops have occasionally made headlines in the U.S., more formal adoption of the Suspended Coffee movement has been slower in America than in Europe.

But the movement is beginning to gain momentum. Of the 2,000 coffee venues that have registered as part of Sweeney's Suspended Coffees campaign, almost a quarter are based in the United States, in cities as far apart as Seattle and New York.

"The generosity of Americans is exceptional. One of my favorite stories is of a barista giving a suspended coffee to a well-dressed regular who was having a really tough day because his wife had left him," Sweeney recalls. "When he was back on his feet, he donated $500 to the cafe's scheme, because the barista's kindness had such an impact on him at such a low time in his life."

Kofenya Coffee in Oxford, Ohio, has been operating a token-based pay-it-forward scheme for around six months. "My passion is being able to use coffee to connect people and support the local community, so it felt natural to introduce the idea of suspended coffee," says coffee shop manager Tim Stiffler-Dean. "We have people taking part almost every day, so I estimate we've sold around 150 suspended coffees so far. Our customers tell us they like it a lot." 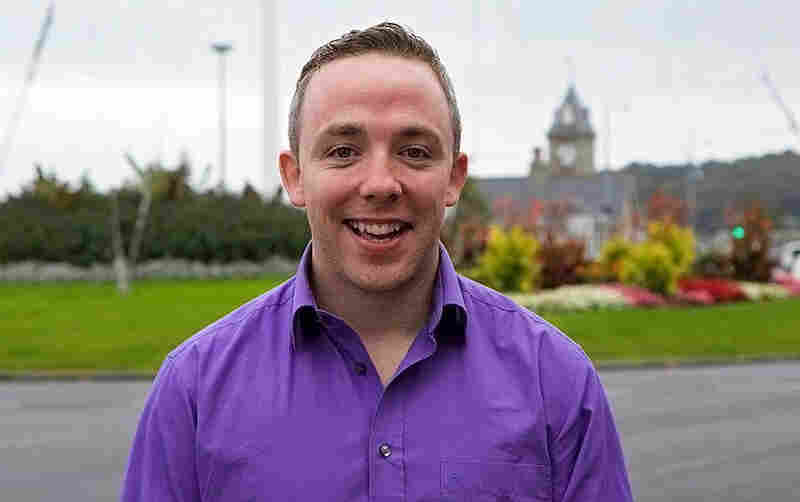 John Sweeney, a plumber from Ireland, heard about Italy's suspended coffee tradition in March 2013 and decided to make it his mission to help spread the movement. Courtesy of John Sweeney hide caption 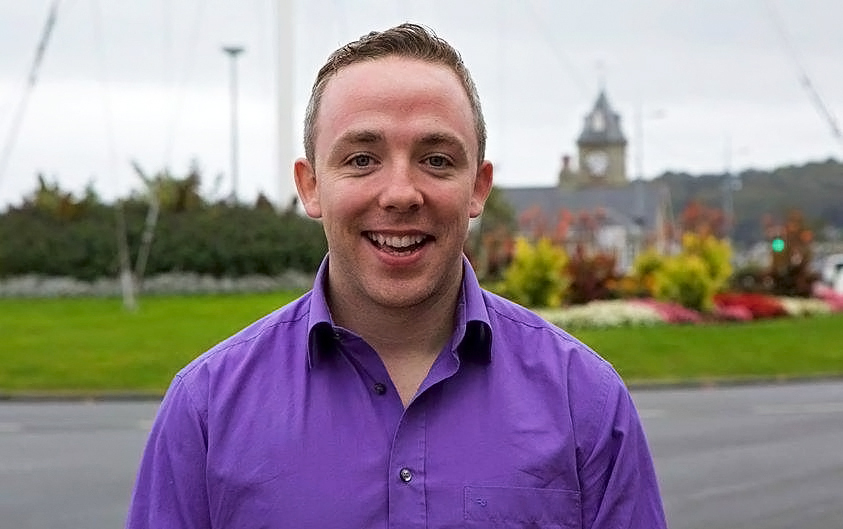 John Sweeney, a plumber from Ireland, heard about Italy's suspended coffee tradition in March 2013 and decided to make it his mission to help spread the movement.

But while suspended coffee works well for some cafes, others are more dismissive of the idea. "We're not-for-profit and very community-focused, but we've never adopted a pay-it-forward scheme," says Glenn Winkler, owner of Homer's Coffee House in a Kansas City, Mo., suburb. "I've heard about the idea, but I'm not sure that our customers know about it. I guess it's something that's just never really happened for us."

One challenge to making kindness through coffee a staple of American culture is that "we're a society that isn't very comfortable, culturally, with asking for help," observes Jason Burton, who runs annual Caffeine Crawl events with independent coffee shops all over the U.S.

"The people who could really benefit from a suspended coffee probably aren't the kind of people who visit the premium coffee spots offering it," he says.

When a cafe signs up, Sweeney's organization sends out supporting materials with ideas on how to get suspended coffee programs off the ground. But he admits that lack of awareness is one of the biggest challenges to widespread adoption, especially in the U.S.

"We're constantly working on new ways to encourage customers to get involved. When people realize what the movement's about, they almost always react positively, so the work lies in raising awareness," Sweeney explains. "Giving out suspended coffees randomly, having some kind of token or coin to represent a suspended coffee, and arranging mornings dedicated to suspended coffee all help to spread the word."

A previous version of this story incorrectly located Homer's Coffee Shop in Kansas City. It's actually in Overland Park, Kan., which is a suburb of Kansas City, Mo.