Accessibility links
Millet: How A Trendy Ancient Grain Turned Nomads Into Farmers : The Salt Hardy, nutritious and gluten-free, millet has become an "it" grain in recent years. Research reveals our ancestors relied on it: Millet was central to the rise of agriculture and farming communities.

Millet: How A Trendy Ancient Grain Turned Nomads Into Farmers

Millet: How A Trendy Ancient Grain Turned Nomads Into Farmers 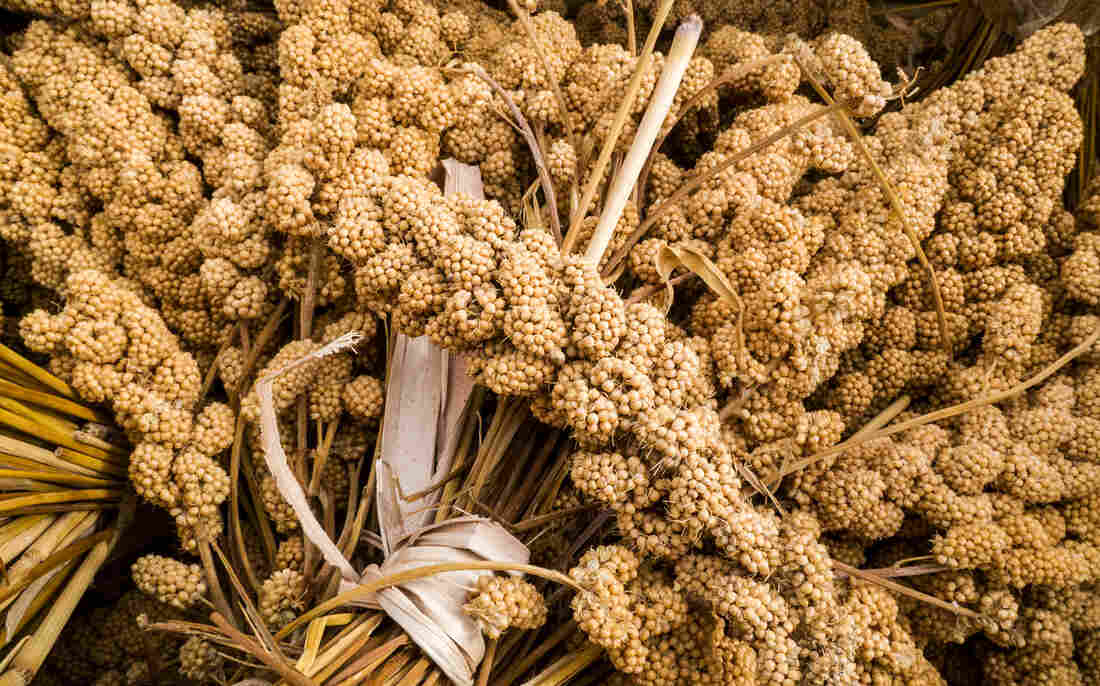 Millet isn't just one grain but, rather, a ragbag group of small-seeded grasses. Hardy, gluten-free and nutritious, millet has become an "it" grain in recent years. billy1125/Flickr hide caption 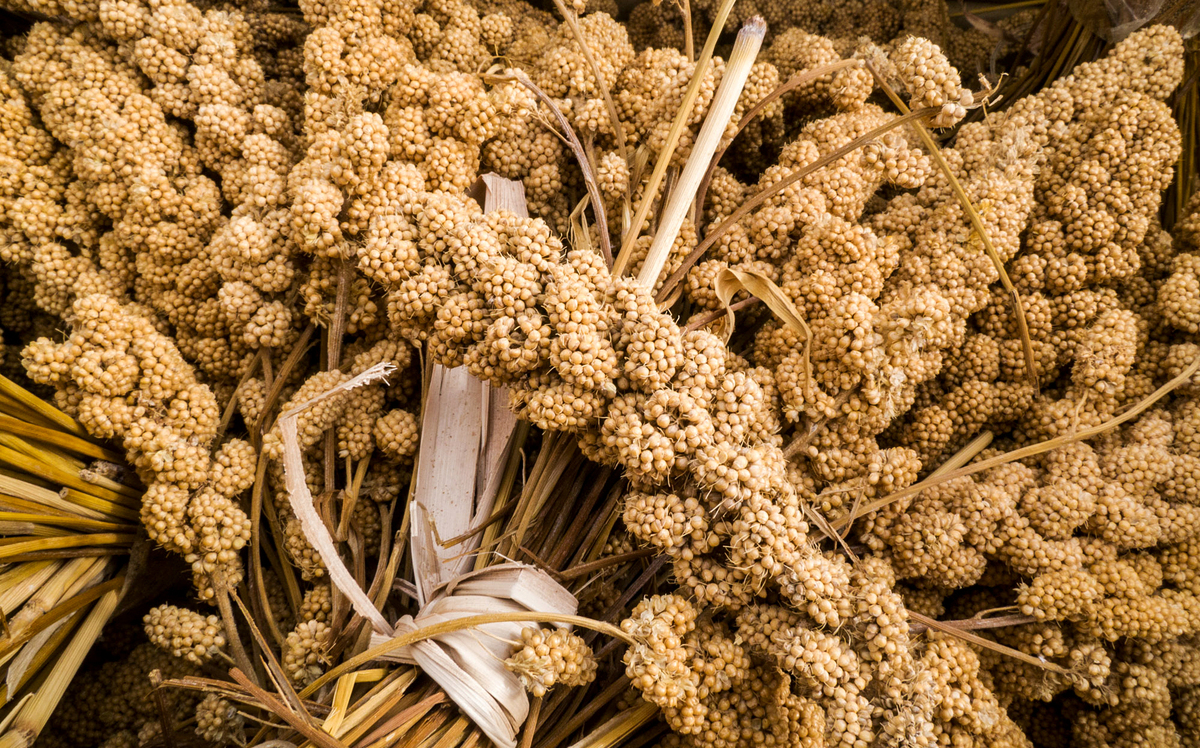 Millet isn't just one grain but, rather, a ragbag group of small-seeded grasses. Hardy, gluten-free and nutritious, millet has become an "it" grain in recent years.

Like amaranth and quinoa before it, millet – a hardy, gluten-free ancient seed – has become an "it" grain in recent years. Once dismissed as birdseed, millet can now be found sprinkled on top of mashed potatoes at top-rated restaurants, cooked into baby foods, and generally extolled for its nutritious virtues. Some have even dubbed millet "the new quinoa."

This newly trendy grain was once far more prominent in human diets: It played a pivotal role in the rise of multi-crop agriculture and settled farming societies.

That's according to research from Martin Jones, a professor of archaeology at Cambridge University in England, and co-leader of a team whose work on the origin and spread of millet this month won a 2015 Research Award from the Shanghai Archaeological Forum.

The research sheds light on the earliest days of agriculture in China. But more importantly, according to Jones, the prize may help millet to regain its rightful place in modern agriculture.

Now, millet isn't just one grain but, rather, a ragbag group of small-seeded grasses. About 50 species of grass have been cultivated for their seeds. And while millets remain a staple in parts of Asia and Africa, they are in decline around the world, pushed out by larger-seeded, higher-yielding crops such as wheat, rice and corn. Jones and his colleagues studied two: broomcorn millet (Paniceum miliaceum) and foxtail millet (Setaria italica).

Radiocarbon dating of seeds from archaeological sites across China and Mongolia, along with DNA studies of modern varieties, enabled the researchers to piece together a sweeping chronology and map of the grain's relationship with people.

Archaeological remains show that these millets became common in their north China heartland around 7,500 years ago. Seeds recovered from sites of different ages show signs of being domesticated and selected — namely, they got bigger and bigger over time. Human skeletons of the same age show that millets were a staple food source. 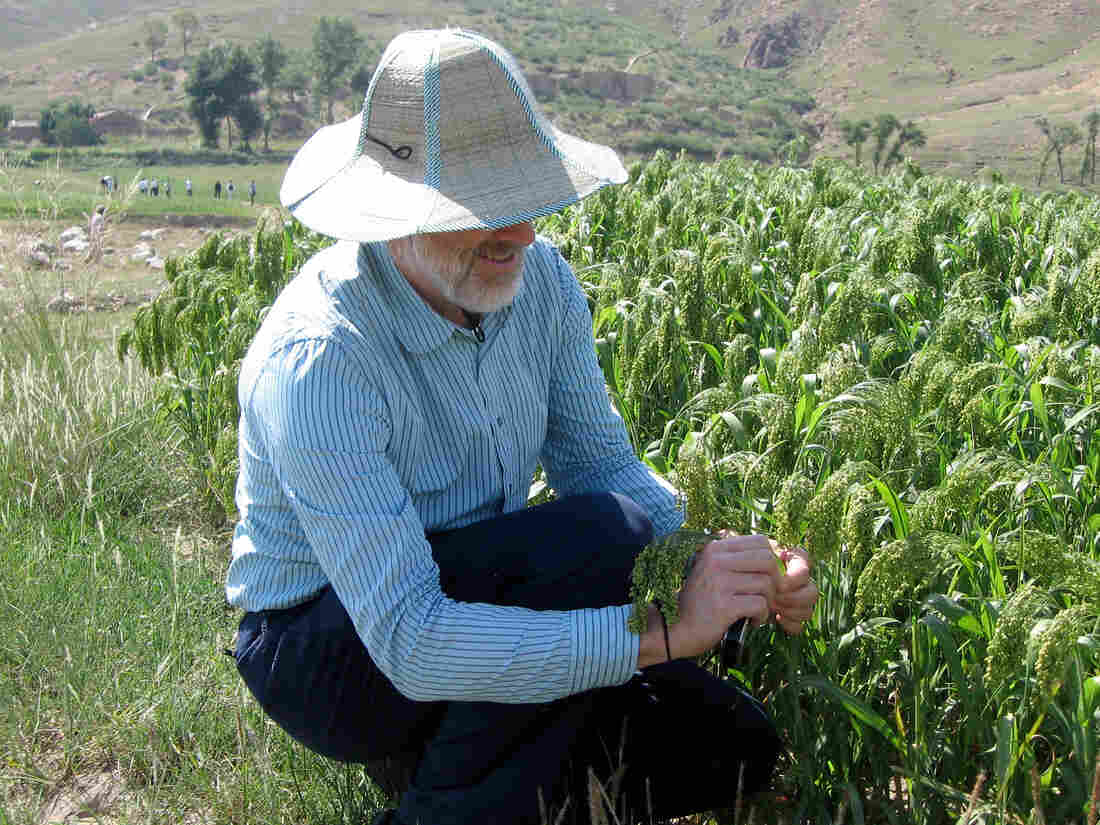 Martin Jones with millet in northern China. He led a team whose research pieced together a sweeping chronology and map of the grain's relationship with people. Martin Jones hide caption 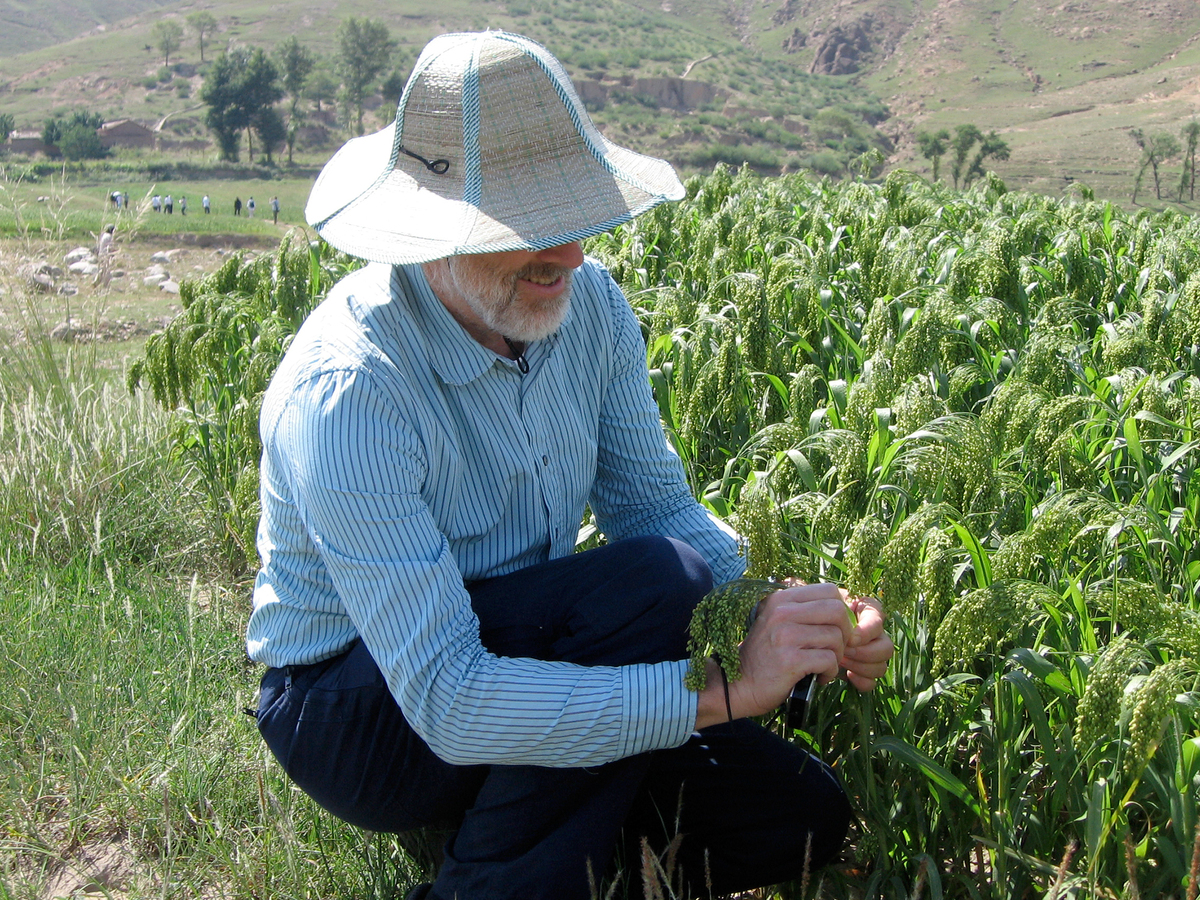 Martin Jones with millet in northern China. He led a team whose research pieced together a sweeping chronology and map of the grain's relationship with people.

Later, these millets traveled from north China into Central Asia and Europe, and south through Thailand to India. And nomadic shepherd-farmers were instrumental in this spread, Jones says. He got a chance to see for himself how this might have occurred while in Mongolia. The herders there spend their lives on horseback, he tells The Salt, but they'll often find a plot of land and scatter millet seeds onto it, returning after a few weeks to harvest the crop.

Millets, Jones says, make a perfect bridge between nomadic life and settled agriculture, because they have a very short growing season – just 45 days, compared to 100 or more for rice – and need very little attention, ideal for nomadic horsemen on the go. "They'd tread the seed in with their horses' hooves and off they go," Jones explains, "maybe leaving a couple of teenagers behind to keep an eye on it."

Meanwhile, in other parts of China, local rice, and wheat and barley from the Near East, were being further domesticated. Roaming shepherds and herders from different regions would have encountered each other, exchanging grains and advice on how to grow them. Evidence of this knowledge-sharing shows up in the archeological record between 2,500 and 1,600 years ago, when "crops that have been there for thousands of years start moving around all over the place," Jones says. Millets moved into the Fertile Crescent, where wheat and barley were predominant, and wheat and barley moved into northern China.

At the same, Jones' research shows, agriculture in China moved out of the foot hills — where individual farmers could control the flow of water — and into the valley bottoms.

And as crops grew more diverse and moved downstream, farmers had to work together to manage their increasingly complex agriculture — a need that encouraged settlements and community-building. 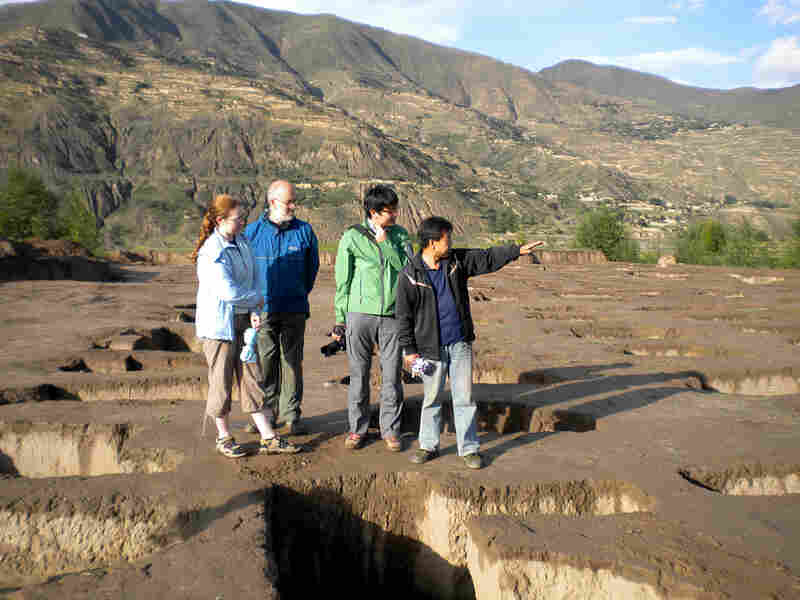 Researchers at a Neolithic site in Mogou, in western China, where eastern and western cereals met. Martin Jones hide caption 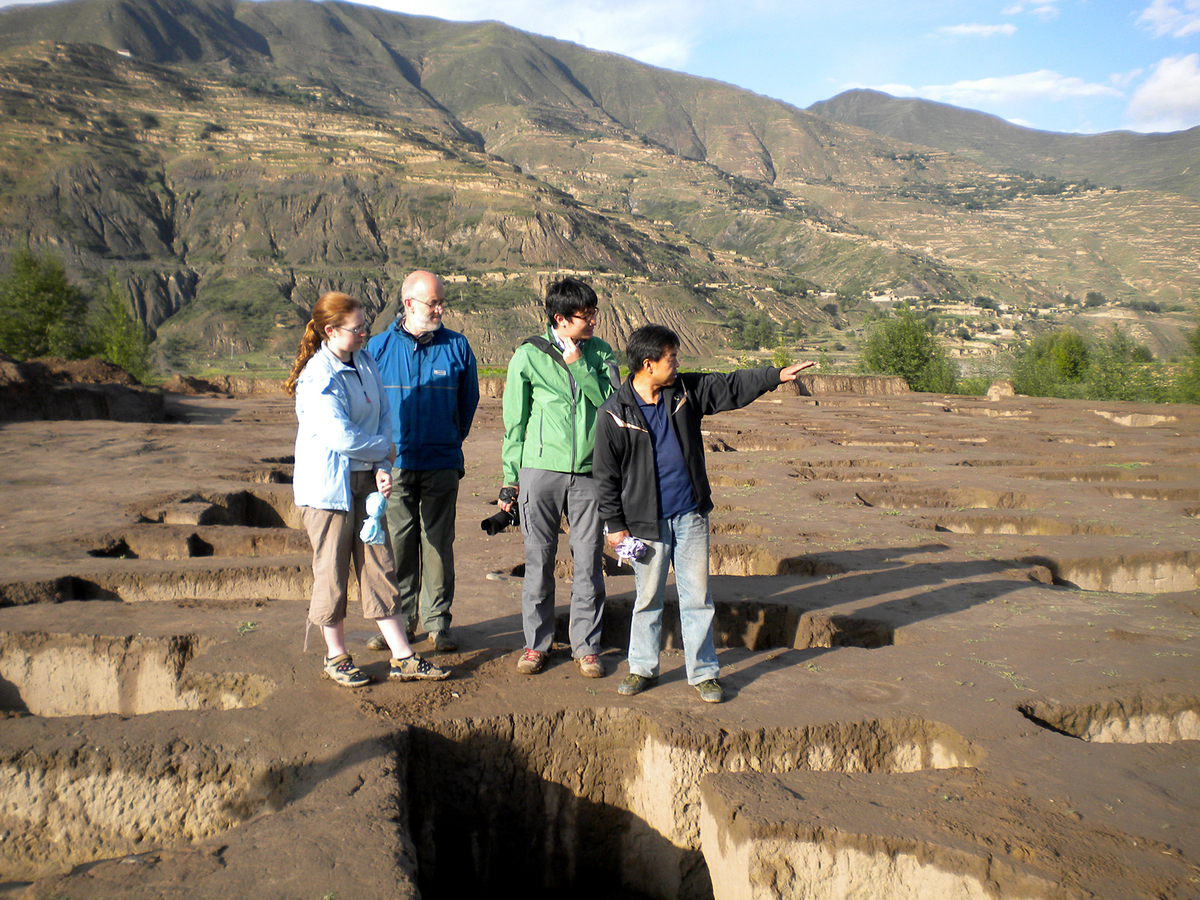 Researchers at a Neolithic site in Mogou, in western China, where eastern and western cereals met.

"With some people growing crops upstream and some farming downstream, you need a system of water management, and you can't have water management and seasonal crop rotation without an elaborate social contract," Jones said in a statement. The multi-crop agriculture that emerged extended the growing season and provided more food with less chance of failure.

For ancient farmers, Jones says, millets would have held obvious appeal. "Millets are tough in various ways," he says, citing their short growing season and drought resistance. When the rains fail, a crop like wheat or rice may fail completely. But millets will generally produce something, even if it isn't very much. That gives wheat and rice farmers an incentive to adopt millets.

And millet farmers adopt wheat, rice and, more recently, corn precisely because those crops yield much more. That last point is probably the key reason why millets have lost their place of prominence in global agriculture. Wheat, rice and corn have benefitted vastly more from research and crop improvement, and commercial markets also became far less interested in "minor" crops. The end result: Many farmers who once grew a balanced portfolio of crops, including millets, have switched almost completely to higher-yielding cereals as cash crops.

"It may be time to consider whether millets have a role to play in a diverse response to crop failure and famine," says Jones.

That kind of reconsideration is now taking place in India. And leading the charge is M.S. Swaminathan, an Indian agricultural scientist known as the father of his country's Green Revolution – which helped displace millets. Now, in a sort of about-face, he's pushed the Indian government to include millets in a massive government program that provides subsidized grains to more than two-thirds of India's 1.2 billion people.