Accessibility links
World's Largest Meatpacking Firm Wants To Test Out Robot Butchers : The Salt Cutting meat is hard, hazardous work, and it still takes thousands of workers to run a modern beef plant. But protein powerhouse JBS is looking for ways to automate the art of butchery. 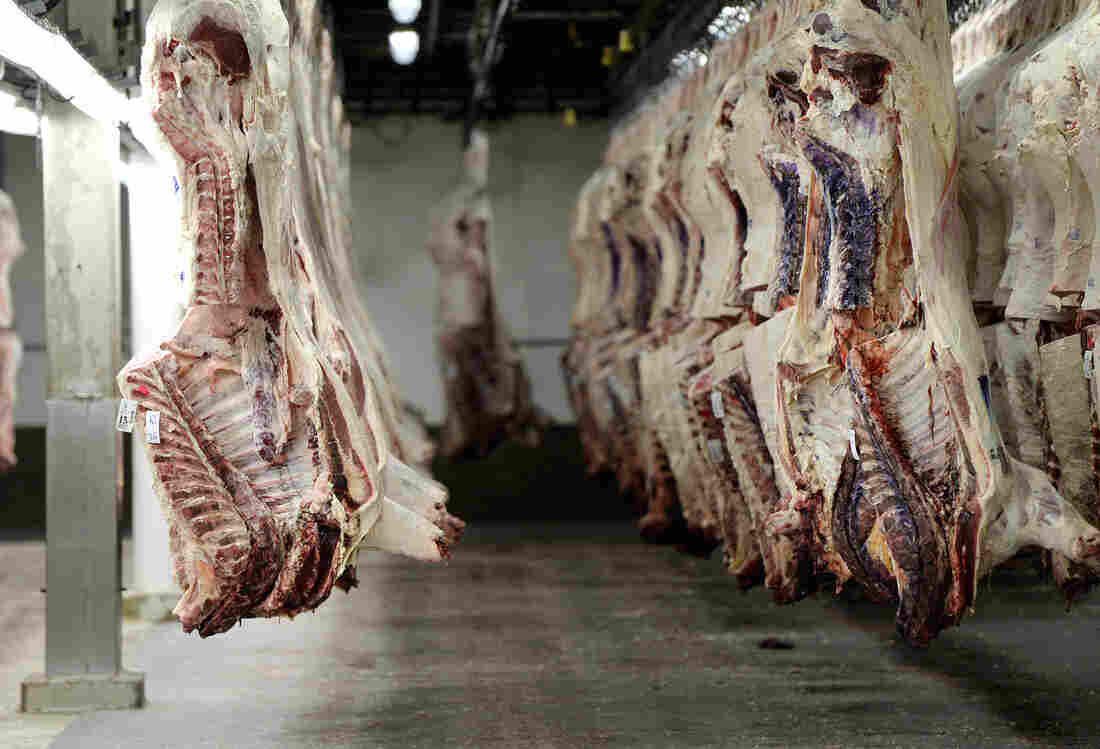 Cattle carcasses hang on hooks inside a cooler at the JBS beef processing plant in Greeley, Colo. JBS employs some 3,000 workers at this plant. The company is looking into ways to automate the art of butchery. Andy Cross/The Denver Post via Getty Images hide caption 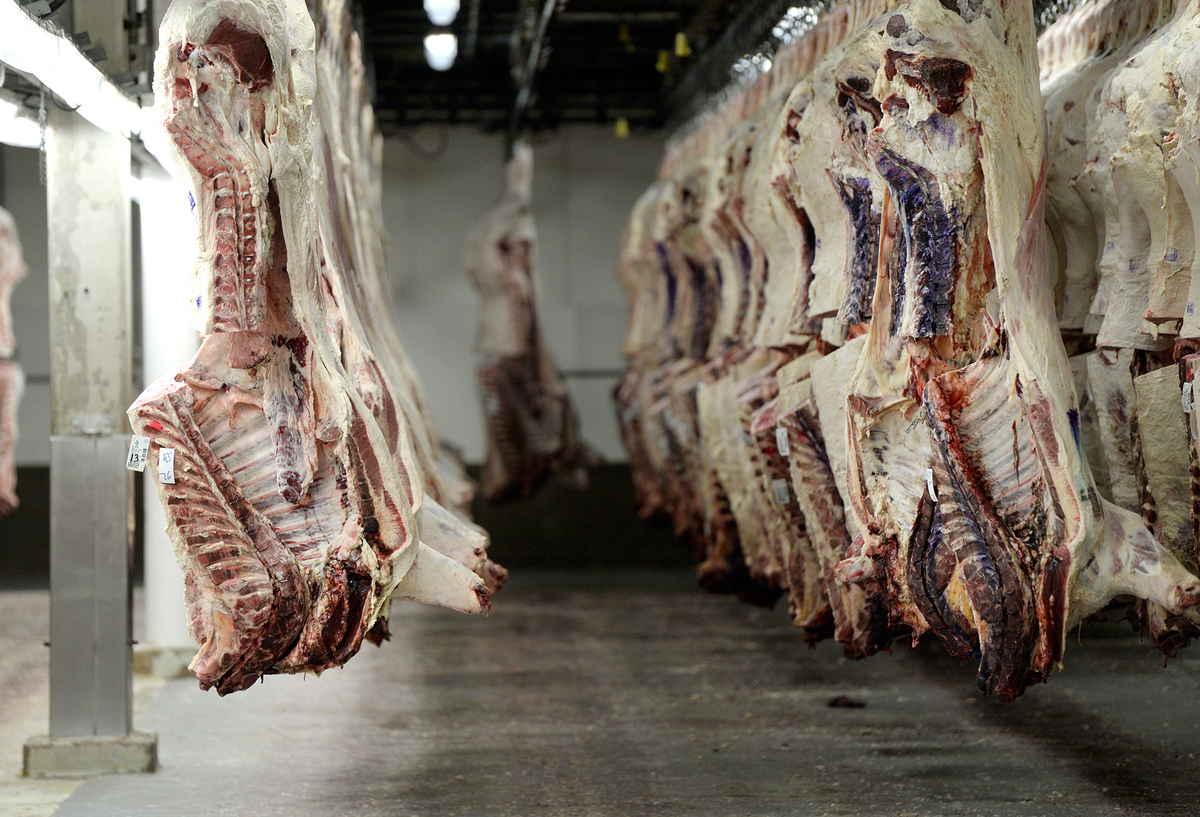 Cattle carcasses hang on hooks inside a cooler at the JBS beef processing plant in Greeley, Colo. JBS employs some 3,000 workers at this plant. The company is looking into ways to automate the art of butchery.

Slaughterhouses and meatpacking plants throughout the country employ a lot of people. About a quarter of a million Americans prepare the beef, pork and chicken that ends up on dinner tables. But some of those workers could eventually be replaced by robots. The world's largest meatpacking company is looking at ways to automate the art of butchery.

While many manufacturers have gone to automated machines to process and package everything from food to furniture, the beef industry has stubbornly held on to its workers.

It still takes thousands of workers to run a modern beef plant. In fact, U.S. meatpacking plants are expected to add jobs in the next decade, as the appetite for pork, chicken and beef grows in the developing world.

Disassembly is the name of the game on the fabrication floor at the JBS beef processing plant in Greeley, Colo. Each worker holds a knife in one hand, sharpening steel to the side. Like a medieval warrior, line workers are dressed in chainmail, a protective mesh lining under blood-spattered white jackets. Deft cuts cleave bone and meat, turning a whole cow into neat and trim cuts like tenderloins, steaks and roasts.

"There's right now 850 people out in this building alone," says plant manager Bill Danley as he weaves through the maze of conveyor belts, stainless steel slides and bone bins.

The plant is a far cry from your grandfather's butcher shop, where a single person would need to know how to turn an entire animal into cuts of meat. Large beef companies like JBS, Cargill and Tyson have turned each minute step of the process into a job. Danley lists some of the titles: chuck boner, tender puller, back splitter, knuckle dropper, tail ripper.

"There's a lot of jobs out here that prep for the other person," Danley says.

Each year this plant pays out more than $100 million in paychecks to its 3,000 employees. It's a huge chunk of the company's operating costs. That could begin to change with JBS' new venture into the world of robotics.

"This is a very innovative and exciting company that we invested in," JBS spokesman Cameron Bruett says of the company's investment in Scott Technology. "And we're excited to see what they'll come up with."

JBS is looking at how robots could fit into its lamb and pork plants first, Bruett says. Sheep and pigs tend to be more uniform than beef cattle.

The meatpacking robots of today use vision technology to slice and dice, but the key to butchery is touch, not sight. And the company's beef division president, Bill Rupp, says right now, robots just can't feel how deep a bone is, or expertly remove a filet mignon.

"When you get into that detailed, skilled cutting, robots aren't there yet. Someday, I'm sure they will be," Rupp says.

The technology isn't quite ready for a massive roll out, but could the economics of widespread robotic use in the beef industry ever work? Not any time soon, says Don Stull, an anthropologist who spent 30 years studying the cultures of meatpacking towns at the University of Kansas.

"Workers are really cheaper than machines," Stull says. "Machines have to be maintained. They have to be taken good care of. And that's not really true of workers. As long as there is a steady supply, workers are relatively inexpensive."

There's a stream of immigrants and refugees, most from Somalia, Rwanda, El Salvador and Guatemala, ready to put on the chainmail and pick up the knife, Stull says. In large, modern plants, companies pay less because the skill needed to work on the fabrication floor is so low. Some jobs take less than a week to fully master.

Turnover in the industry is high, Stull points out, because of the physical demands. "After you do the same thing thousands of times a day, six days a week ... your body wears down," Stull says.

While the industry says it has dramatically improved on worker safety over the years, meatpacking jobs consistently rank among the most hazardous in the country. Increased automation could ease some of those injuries.

But until technology catches up in both skill and costs, meatpacking companies will continue hiring low-skill workers to turn cattle, chickens and hogs into cuts of meat.

This story came to us from Harvest Public Media, a reporting collaboration that focuses on agriculture and food.