Accessibility links
Dispute Over Prayer Breaks Divides Muslim Meatpacking Workers : The Salt The conversation about religious accommodation in the workplace is playing out in a rural Colorado meatpacking town where Muslim workers at a Cargill plant were fired over prayer breaks. 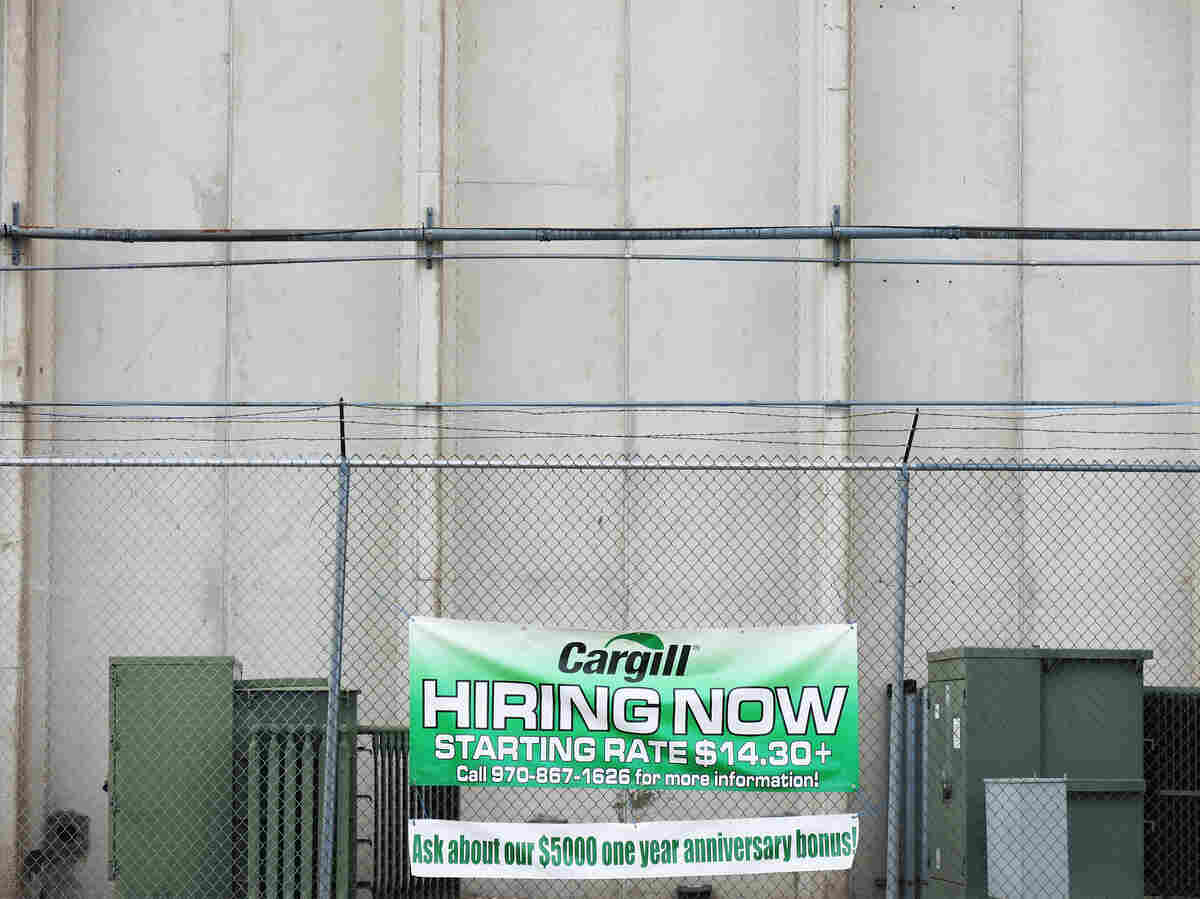 The Cargill beef processing plant in Fort Morgan, Colo., advertises openings in early January. Some 150 Muslim workers were fired in late 2015 after a dispute over prayer breaks at the plant. Luke Runyon/KUNC and Harvest Public Media hide caption 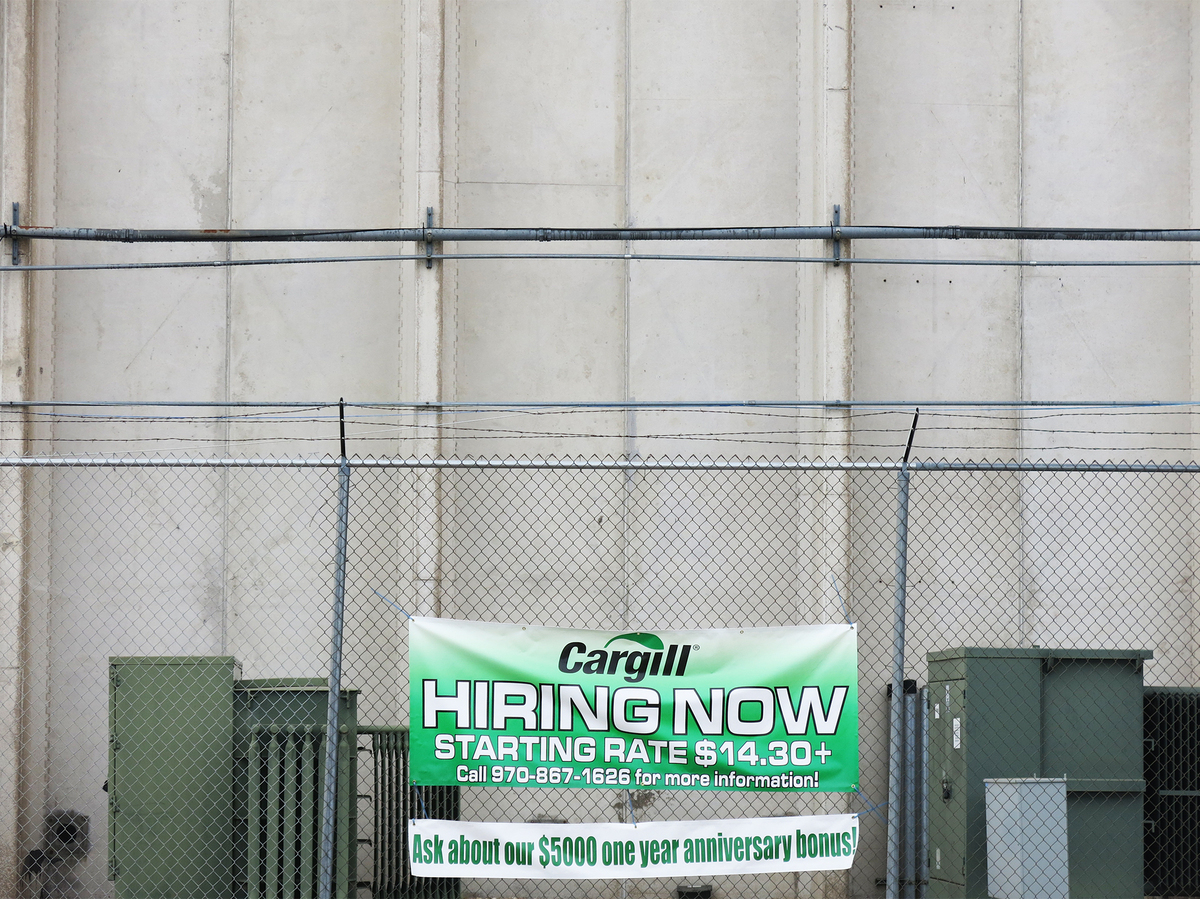 The Cargill beef processing plant in Fort Morgan, Colo., advertises openings in early January. Some 150 Muslim workers were fired in late 2015 after a dispute over prayer breaks at the plant.

In Fort Morgan, Colo., 150 Muslim workers were fired in late 2015 after a dispute over prayer breaks at a Cargill beef processing plant.

In early 2016, the company changed its rehire policy to allow the fired employees to reapply for their jobs. But some community leaders say damage has already been done. The city's residents of East African descent, some of whom still have their jobs, are now at odds with those who do not. And the relationships among Cargill and the refugee populations it relies on for labor are frayed.

In early January, Nurto and Sadiyo Abdi enjoyed a midday cup of spiced tea with milk at their apartment in Fort Morgan. Normally, the 20-something sisters would be spending this time preparing for their afternoon shift at the Cargill plant a short drive down the road.

The sisters are refugees, finding their way to Fort Morgan five years ago after leaving their home country of Somalia. Five times a day the sisters stop to pray, an essential part of their Muslim faith, Nurto says.

Praying at work involves leaving the cutting room floor, changing out of a blood-spattered frock, and returning after five minutes. The timing of the prayer during the plant's second shift can change with the seasons and requires some flexibility in the plant's operations to accommodate.

"If I stop my prayer time, everything is hard for me," Nurto says.

After four years of work at Cargill, Sadiyo says, she became accustomed to taking these short breaks, with little to no pushback from management.

In mid-December, the sisters say that changed. They say a shift supervisor told a group of 11 employees they could no longer leave their stations on the meat-cutting line to pray.

"Four times we pray in our homes," Nurto says. "Only one time [per shift] we pray in Cargill. And they say we don't have time to go to prayer time."

Although Cargill disputes this claim, the incident snowballed. The sisters joined with nearly 200 other workers, staying home to protest what they saw as a change in company policy. Until then, they say, they'd been allowed to take a short five-minute break to pray. After three days of failing to show up, they were fired.

The Council on American-Islamic Relations, which represents some of the fired workers, says the company's supervisors were sometimes hostile to prayer requests and that Cargill's existing religious accommodation policy is vague and ambiguous.

Cargill doesn't see it that way.

"Nobody was ever told that prayer was abolished. Or that prayer could not be accommodated," says Mike Martin, a Cargill spokesman. "There are times, specific times, when because of staffing levels an individual request for prayer may not be granted at a specific time on a specific day."

During the past decade, America's meatpacking plants have become increasingly diverse, with more immigrants from various cultural and religious backgrounds filling jobs to cut meat. Cargill has attempted to keep up, Martin says, installing reflection rooms for prayer in its facilities and being flexible with break times. Still, cross-cultural misunderstanding and tension seem inevitable.

"It would be hard to go year-round without someone misperceiving something," Martin says. "But this seems to be on a different level."

Workplace disputes are difficult to discuss in abstract terms, says Rachel Arnow-Richman, director of the University of Denver's workplace law program. They involve dynamic circumstances, complex relationships and fact-dependent cases. And increasingly in the country's meatpacking facilities, shifts are often staffed by a mix of workers who hold strong religious and cultural beliefs.

"The reality is that it's not always clear what constitutes a reasonable accommodation, or an undue hardship," says Arnow-Richman.

In a large slaughterhouse, for example, one person missing for 10 minutes can slow down an entire shift. If a religious accommodation, like a prayer break, imposes a significant cost on the employer, a company has the right to refuse the request, Arnow-Richman says.

"The subtleties of what is required or what the employer permits, versus what a supervisor actually does, those can certainly get lost in any workplace, not even accounting for language and cultural differences," Arnow-Richman says.

In a bid to compromise and give some workers a chance at getting their jobs back, Cargill is allowing the fired employees to reapply sooner rather than later. But Michaela Holdridge, executive director of One Morgan County, a nonprofit that focuses on diversity in Fort Morgan, says it might be too little too late.

"We already have word of about 20 families or so who have already left," she says.

Holdridge says the families are scattering across the Midwest and Great Plains, heading to Wyoming, Nebraska, Minnesota and Ohio to find jobs.

"If you don't have your job here, there's not much to stay for," she adds.

With a large number of workers leaving town, and their jobs, all at once, Holdridge says a new wave of immigrants with their own religious and cultural traditions could pursue the open jobs at the Cargill plant.