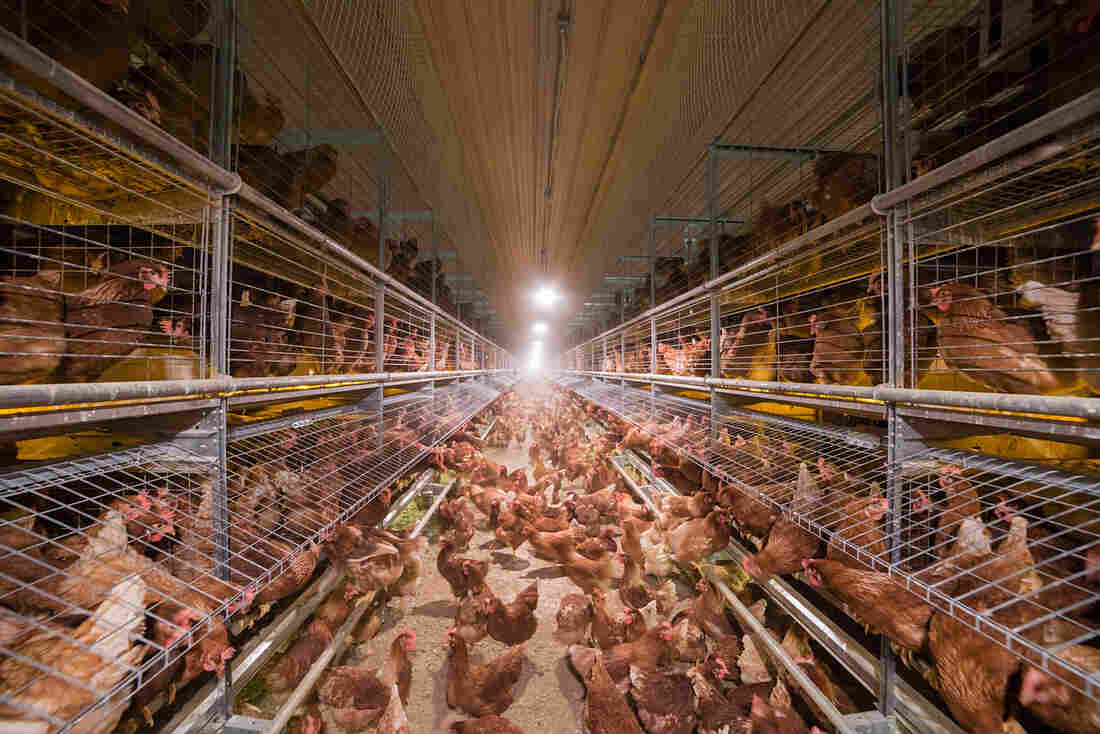 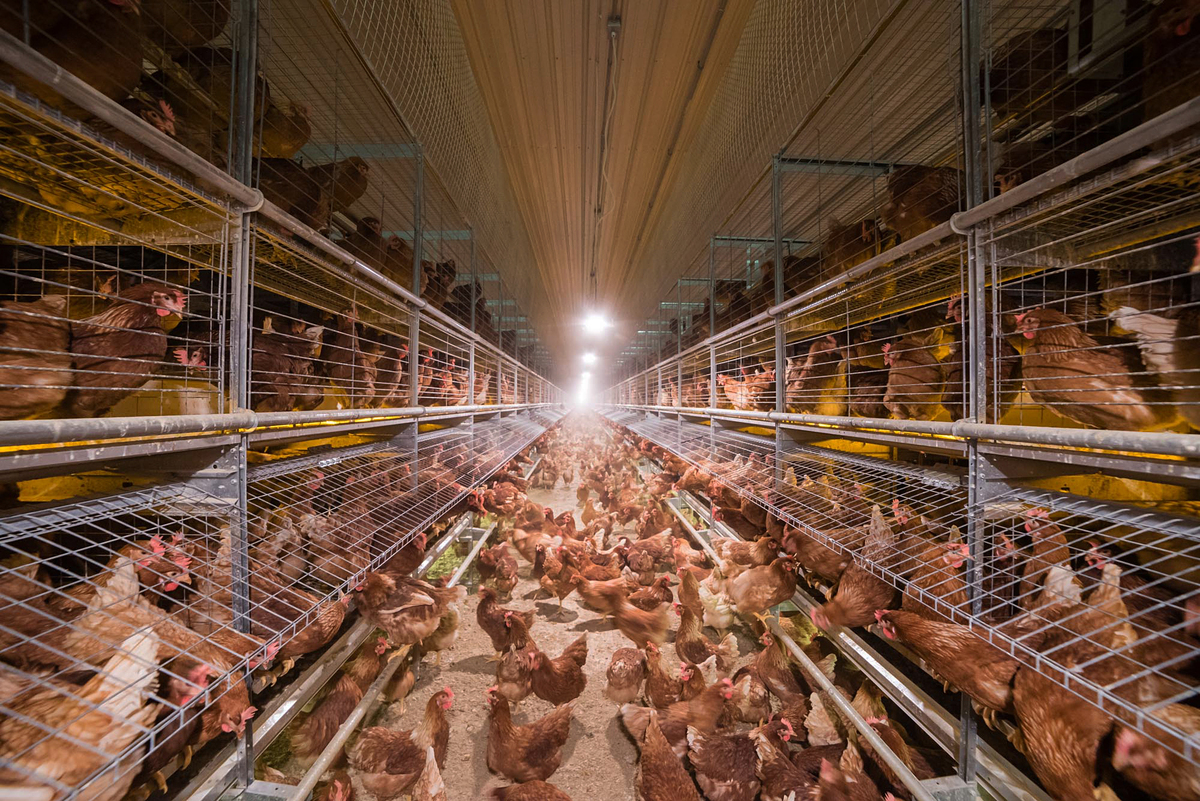 A view inside a cage-free "aviary" chicken house, designed by Big Dutchman.

From McDonald's to Costco, Big Food has been declaring a shift to buying only cage-free eggs. Three more companies took the step this month: Denny's, sandwich chain Quizno's and Mondelez International, maker of Ritz crackers and Chips Ahoy cookies.

Here at The Salt, we've been wondering how egg producers are reacting.

So we called up the biggest name in chicken housing, the company Big Dutchman. It's a German company, despite its name, and it operates globally, manufacturing housing for both chickens and pigs.

Clovis Rayzel, president of Big Dutchman USA, says that the majority of American egg producers, when they order new chicken houses, now are choosing cage-free systems. "It's a very interesting and very big change compared to some years ago, and it is even more interesting because here in this country, we are seeing this change based solely on the market," Rayzel says.

The Year In Eggs: Everyone's Going Cage-Free, Except Supermarkets

Does Your Food Have A Bad Case Of The Blahs? Put An Egg On It!

That is, no law has required farmers to do this. California's voters did pass a measure, which came into effect at the beginning of 2015, requiring that egg-laying chickens have enough room to spread their wings and turn around.

But farmers could satisfy that requirement simply by reducing the number of chickens in each cage. Some farmers are installing "enriched" cages, also called colony cages, which offer more room, perches for chickens to sit on, and enclosed nest areas for them to lay their eggs. 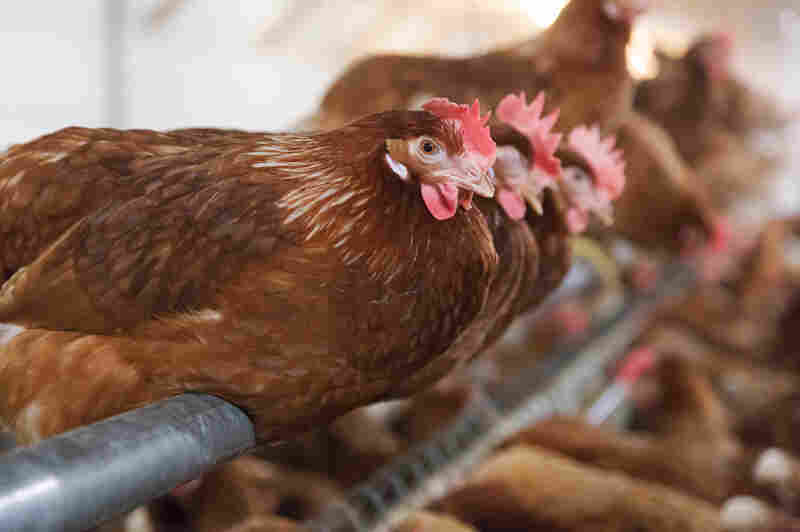 Currently, only about 10 percent of egg-laying chickens in the U.S. live in cage-free houses like the one seen in this photo. Courtesy of Big Dutchman, Inc. hide caption 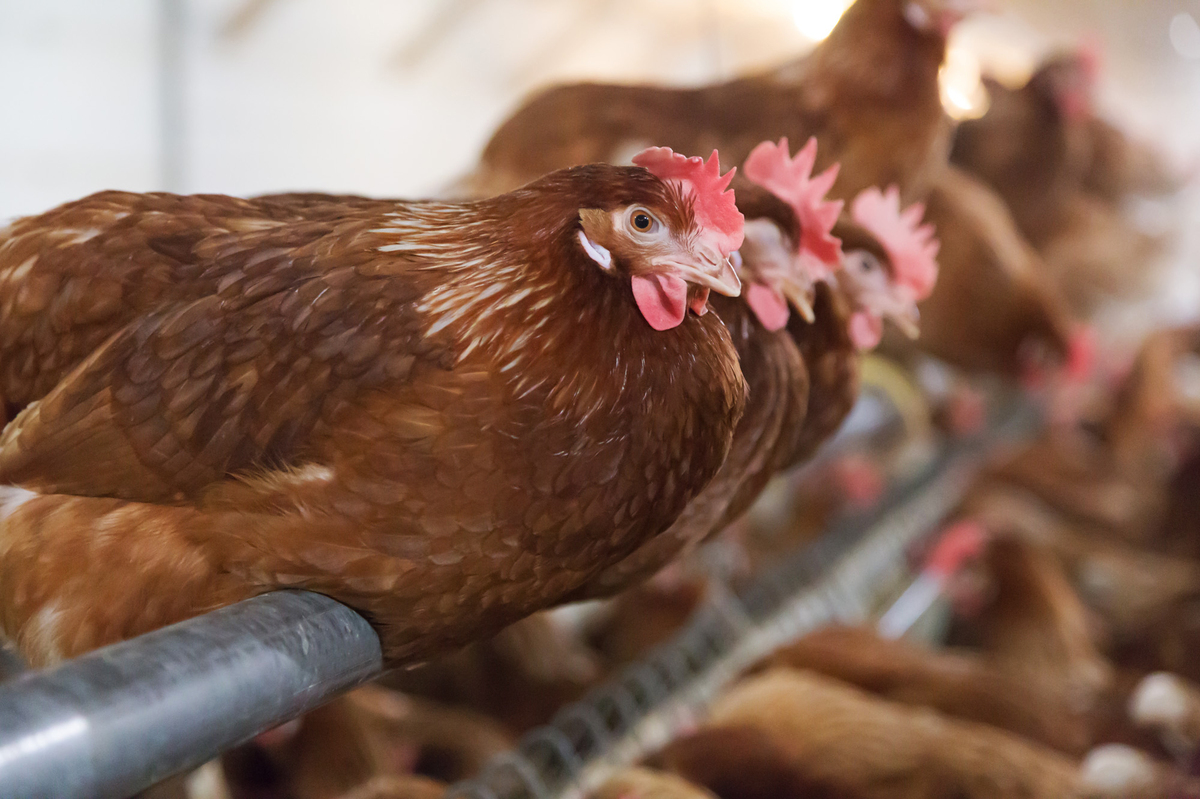 Currently, only about 10 percent of egg-laying chickens in the U.S. live in cage-free houses like the one seen in this photo.

Many American egg producers had long argued that cage-free eggs would inevitably be much more expensive than eggs from cage systems. But in recent years, European companies, such as Big Dutchman, have come up with designs for cage-free housing that allow for efficient, mechanized handling of hens and their eggs. In a 2015 industry-funded study carried out by researchers at Michigan State University and the University of California, Davis, eggs from a large cage-free house cost about 15 cents more to produce, per dozen, than eggs from traditional cages.

Many consumers appear willing to stomach that increase, and the cage-free label has proved powerfully attractive. Rayzel says there's now serious debate within the egg industry about whether cage-free production will replace cages entirely in the future.

Currently, only about 10 percent of chickens in the U.S. are being raised cage-free — one reason the food companies that are pledging a shift to eggs from chickens raised this way won't be able to fulfill those pledges quickly. McDonald's, for instance, says that the shift to cage-free could take 10 years. Cage-free production is growing, but only as fast as older chicken houses wear out and need to be replaced.

For his part, Rayzel thinks that for the foreseeable future, some portion of the industry will stick with cages to serve their most price-conscious consumers. "I think that after 10 years, we will still have a significant portion that is not cage-free," he says.