Accessibility links
A Cooking Class Where New Immigrants Learn The Recipe For English : The Salt A program in Philadelphia folds lessons in English as a second language into a cooking class. The goal is to add a dash of the familiar to ESL class for new arrivals, and teach healthful eating, too.

A Cooking Class Where New Immigrants Learn The Recipe For English

A Cooking Class Where New Immigrants Learn The Recipe For English 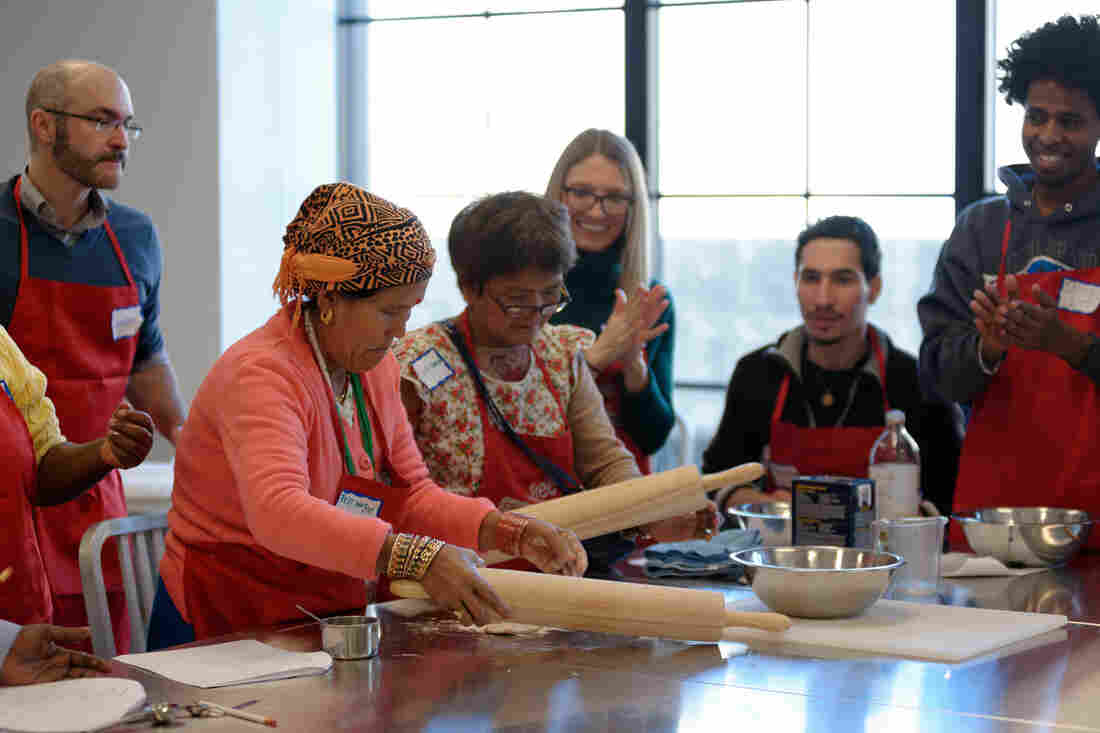 Teela Magar and Cing Neam prepare the roti dough as part of Edible Alphabet, a program in Philadelphia that folds English lessons for new immigrants to the U.S. into a cooking class. Students also learn about seasonality and healthful eating on a budget. Bastiaan Slabbers hide caption 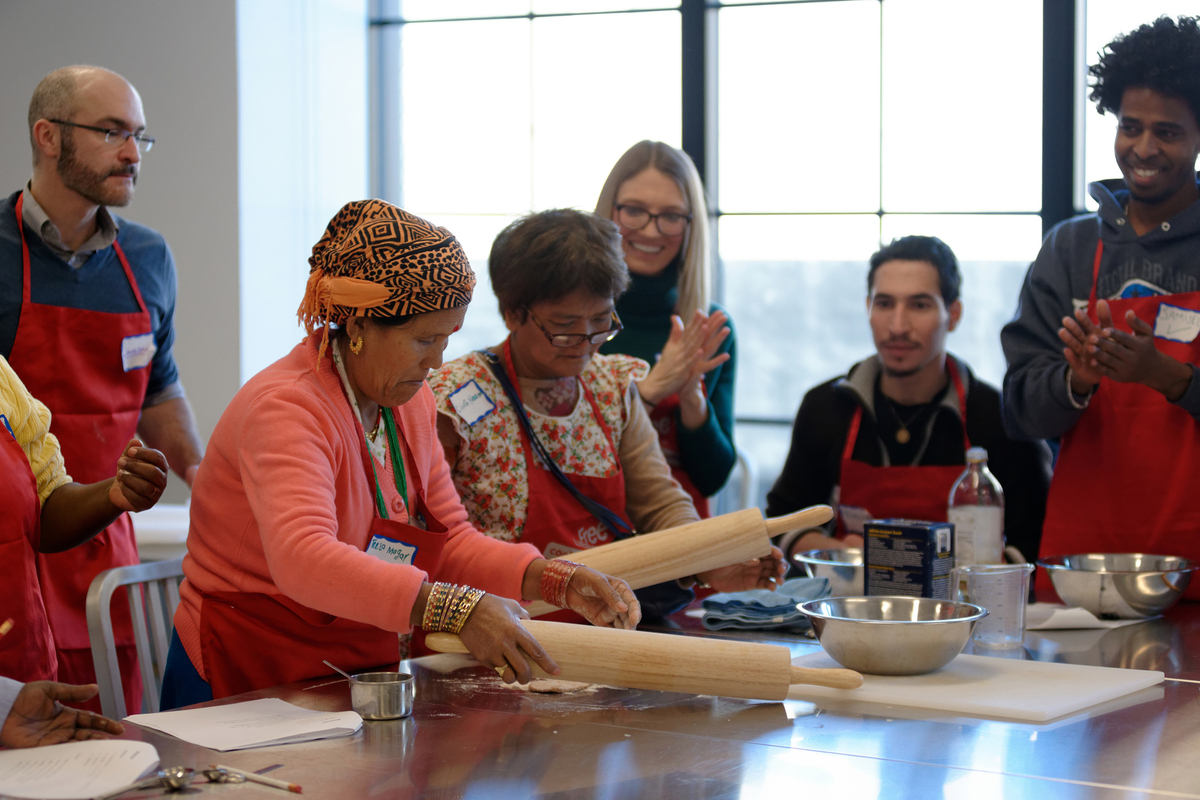 Teela Magar and Cing Neam prepare the roti dough as part of Edible Alphabet, a program in Philadelphia that folds English lessons for new immigrants to the U.S. into a cooking class. Students also learn about seasonality and healthful eating on a budget.

For many immigrants, coming to America is full of the unfamiliar — from the language to the food. In Philadelphia, a program aims to help these arrivals settle into their new country by folding English lessons into a cooking class.

On a recent Wednesday afternoon, 20 recent immigrants and refugees to the United States streamed into a shiny commercial-size kitchen on the fourth floor of the Free Library of Philadelphia's central branch. They were here to partake in the library's take on teaching English as a second language.

The program, dubbed Edible Alphabet, is run through the library and Nationalities Service Center, an organization that helps settle refugees when they arrive in Philadelphia. By offering English instruction in the form of a cooking lesson, organizers hope to provide a familiar setting for the students — who hail from over 10 different countries — to connect to each other.

"It's been great for us to sort of connect over, 'Here's a can of chickpeas. What do you use chickpeas for in your meals? How would you do this differently at home?' " says the library's program administrator, Liz Fitzgerald.

Each class is helmed by both a chef and an English-as-a-second-language instructor. The class starts off with an English lesson focusing on the day's ingredients. Today, the students are spelling and sounding out words like onion, garlic, tomato and jalapeno. After the language lesson is over, they'll set out to make chana masala and roti together.

ESL instructor Jillian Gierke says the class is about much more than just learning English.

"This is about welcoming new Philadelphians to the city," she says. "There is no better way to do that than to share a meal together."

Student Jules Ntikarahava says the class is helping him adjust to life in America. He moved to Philadelphia from Burundi two months ago. 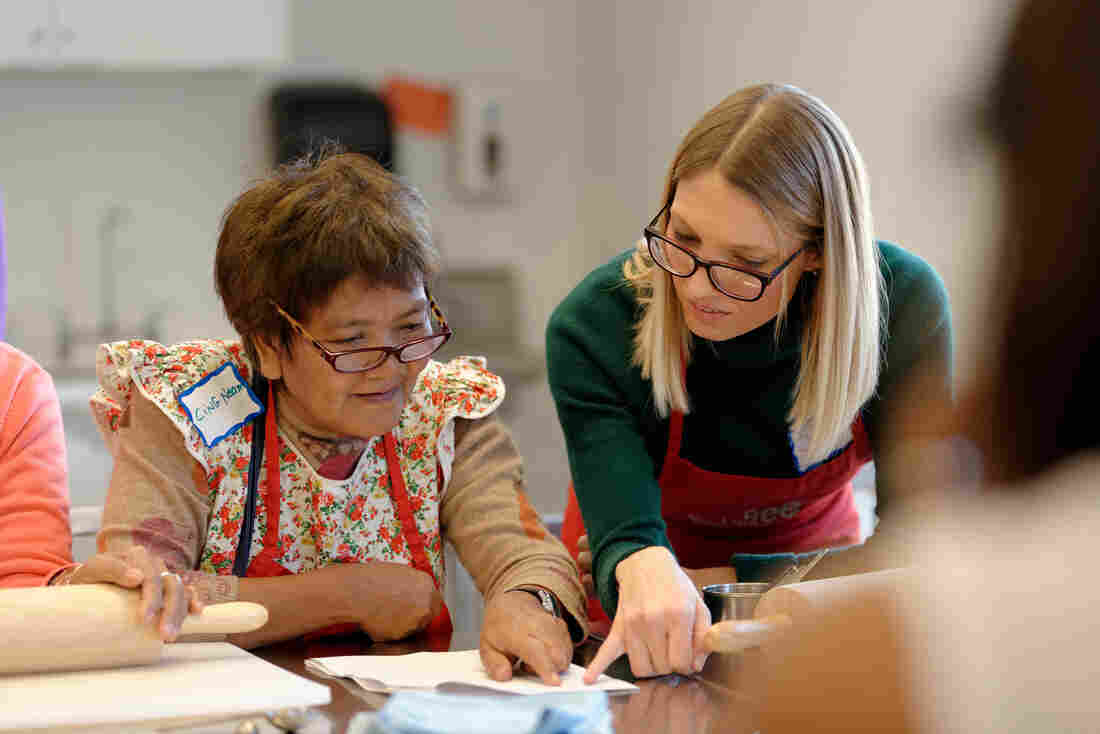 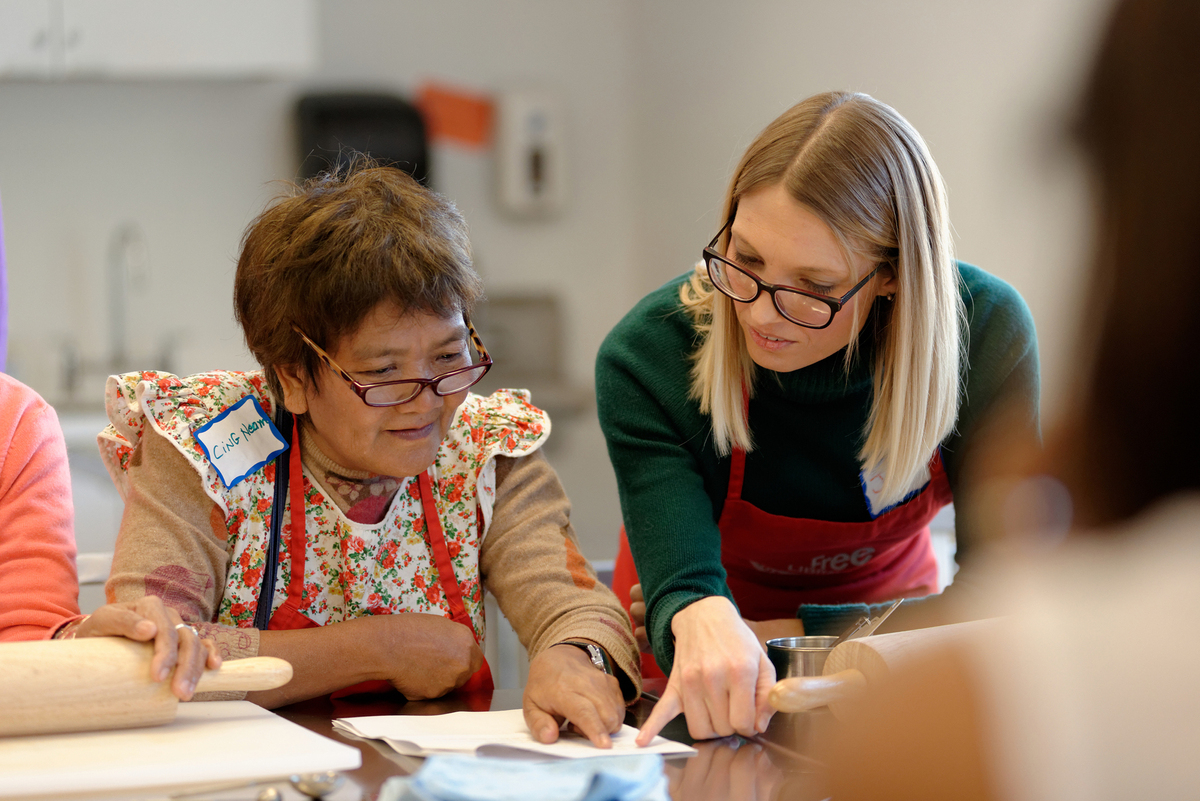 "I like class because it helps me about to learning very well English," he says. "Yes, I'm trying my best."

"I am happy too much," Ntikarahava says about life in America. "There is peace. More than where I am coming from in Africa."

For 22-year-old Dua'a Saleh, who came here from Eritrea, the class is a welcoming space where she can meet friends. She said she isn't too interested in cooking, but likes learning the English words for ingredients she recognizes. While fellow students rolled out roti and chopped vegetables, Saleh was carefully documenting each step on Snapchat to send to her friends back home.

"I'm making a lot of friends because I am sociable," she says, adding that it's fun to share her new life with her old friends over social media.

All the recipes used in the class are pulled from the cookbook "Good and Cheap," which focuses on meals that are affordable for someone on SNAP benefits (what used to be called food stamps). Fitzgerald says learning how to navigate an American grocery store on limited means is an important part of the class. Strawberries, for example, are available in America year-round, but will cost more and won't taste as good in January.

"One of the things we are trying to do is teach people about seasonality and getting the most bang for their buck," says Fitzgerald.

It's the third time the class has been taught. And along the way, the instructors say they've learned some lessons of their own. For instance, Fitzgerald says in the first round of classes, they started off by teaching recipes like quinoa salad. But, they quickly realized the students weren't digging the flavors.

"They weren't coming up for seconds," she says.

That's when they started teaching recipes that used flavors and ingredients more familiar to the students, who mostly come from Southeast Asia, Africa and the Middle East. In addition to today's chana masala, the students will go over how to make pancakes, dumplings, empanadas and savory cobblers during the course.

"They all knew ginger, they knew garlic, they knew onions," says Juliane Ramic of Nationalities Service Center. "Food is warmth, it's comfort, it breaks down those barriers."

Galeb Salman left his native Iraq 25 years ago and most recently lived in Thailand. He says he savors the choices and freedom he feels since arriving here in September with his wife and five kids.

"I like pizza," he says. "And what are you calling [it] in Philadelphia? Cheesesteaks."

Neema Roshania is an associate editor with NPR member station WHYY in Philadelphia, where a version of this story first ran.