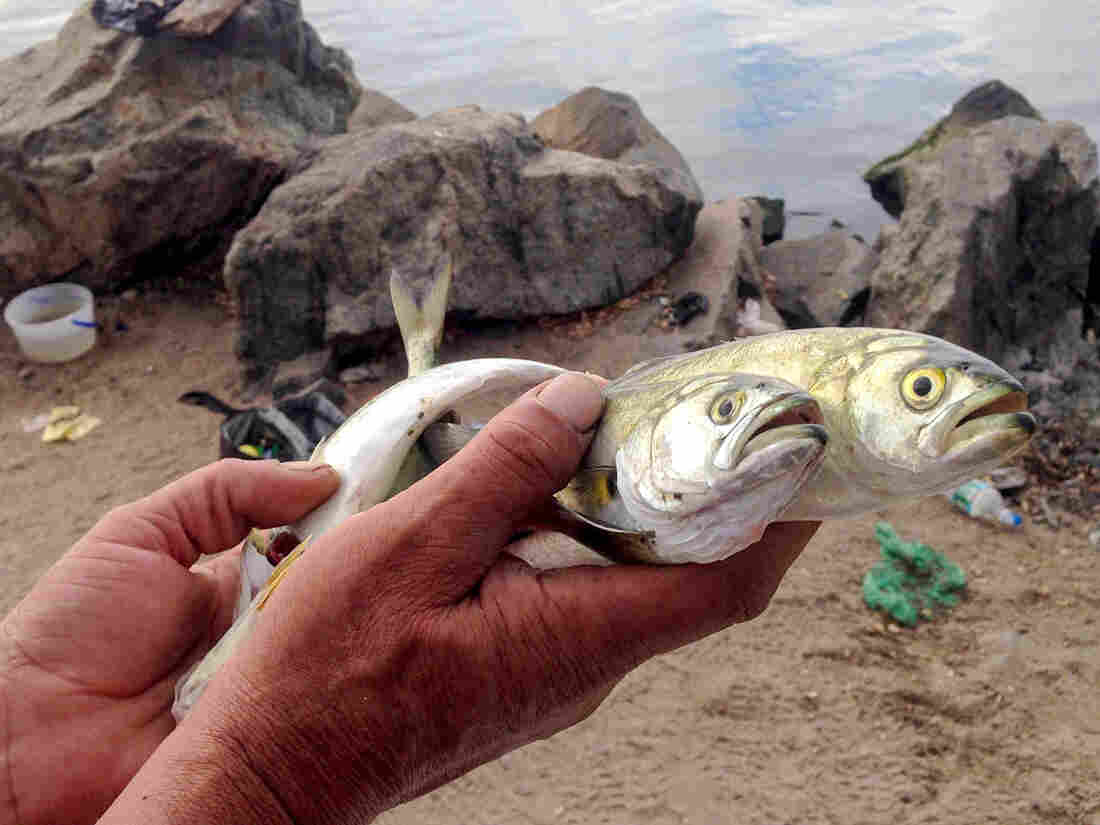 The New Jersey Department of Environmental Protection and Department of Health advise against eating any fish from the Lower Passaic because it may be contaminated with toxic chemicals. But Owaldo Avad says he's been catching and consuming fish like these from the river for eight years. Sarah Gonzalez/WNYC hide caption 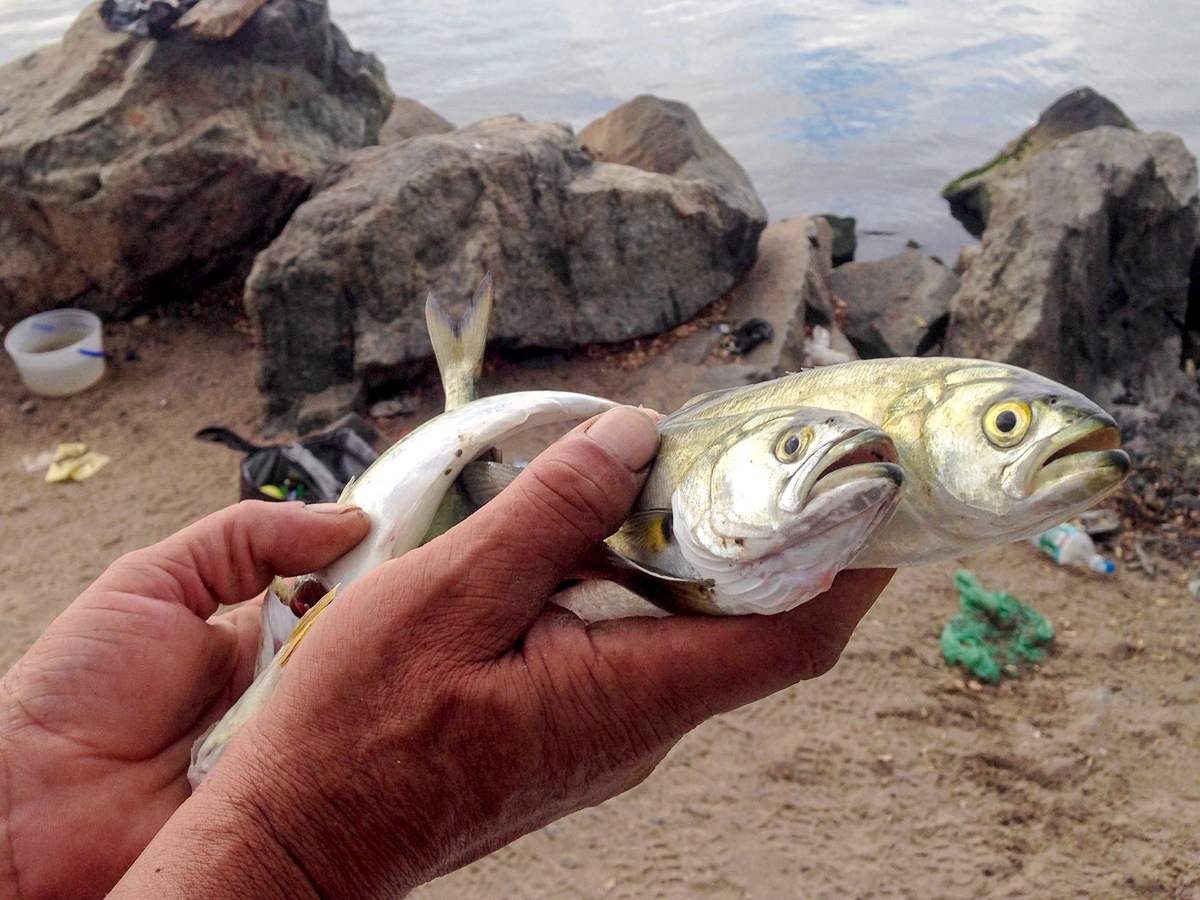 The New Jersey Department of Environmental Protection and Department of Health advise against eating any fish from the Lower Passaic because it may be contaminated with toxic chemicals. But Owaldo Avad says he's been catching and consuming fish like these from the river for eight years.

Standing on the bank of the Passaic River where it meets the Newark Bay in New Jersey, Oswaldo Avad reels in a small bluefish and a piece of a grocery bag.

"One piece plastic and one fish," Avad says in broken English.

According to the New Jersey Department of Environmental Protection, children, pregnant women and women who might one day want to be pregnant should not eat any fish from most of the waters in New Jersey. It's safe for men to eat a small amount: about one catfish or one eel per year.

But the authorities advise against anyone eating fish from the Lower Passaic River because of the toxic chemicals, including Agent Orange, that have been dumped there over the years. The fish contaminated with the waste could cause cancer, liver damage, birth defects and reproductive issues in people who eat them, an advisory from the DEP and the New Jersey Department of Health warns.

Still, Avad does it all the time; he says he knows he's eating contaminated fish, but he doesn't have any health problems, so he'll take the risk.

Fifty-four of the companies who may be responsible for polluting the Passaic — including Pfizer, Rubbermaid and Tiffany & Co. — are now funding a fish exchange program aimed at protecting the health of fishermen like Avad who eat fish out of the river.

To participate, residents can bring their contaminated catch to a tent in Lyndhurst, N.J., and swap it for clean, healthy tilapia being raised in a greenhouse in Newark.

But the program has hit a number of snags. In 2015, none of their 300 tilapia reached harvest size, so the organizers handed out frozen tilapia fillets from Costco instead. And they're not sure how to dispose of the contaminated eel, carp, perch and crab they've collected.

"It will be years before the fish can be consumed safely," says Jonathan Jaffe, a spokesperson for the polluters. "So until that time we are trying to reduce risks to the most vulnerable in our community."

The Passaic River is one of the most contaminated bodies of water in the country. More than 100 companies are potentially responsible for dumping toxic byproducts from the manufacture of compounds like Agent Orange and hydraulic fluid in it for decades before that was outlawed.

The 54 companies, which joined together to form the Lower Passaic River Study Area Cooperating Parties Group, have spent $1.1 million voluntarily funding the fish exchange and greenhouse project. The waste produced by the fish is used to grow lettuce and herbs for a local food bank.

Since June, the polluters have prevented just 170 contaminated fish from being eaten.

Opponents say they've hardly made a dent. And the 170 contaminated fish they've collected are now sitting in a freezer in Newark with no disposal plan.

"They could just go to a landfill," says Amy Rowe, an environmental chemist at Rutgers University who oversees the fish exchange for the polluters. "They could be buried somewhere in New Mexico. There are all kinds of ways to get it out of Newark." 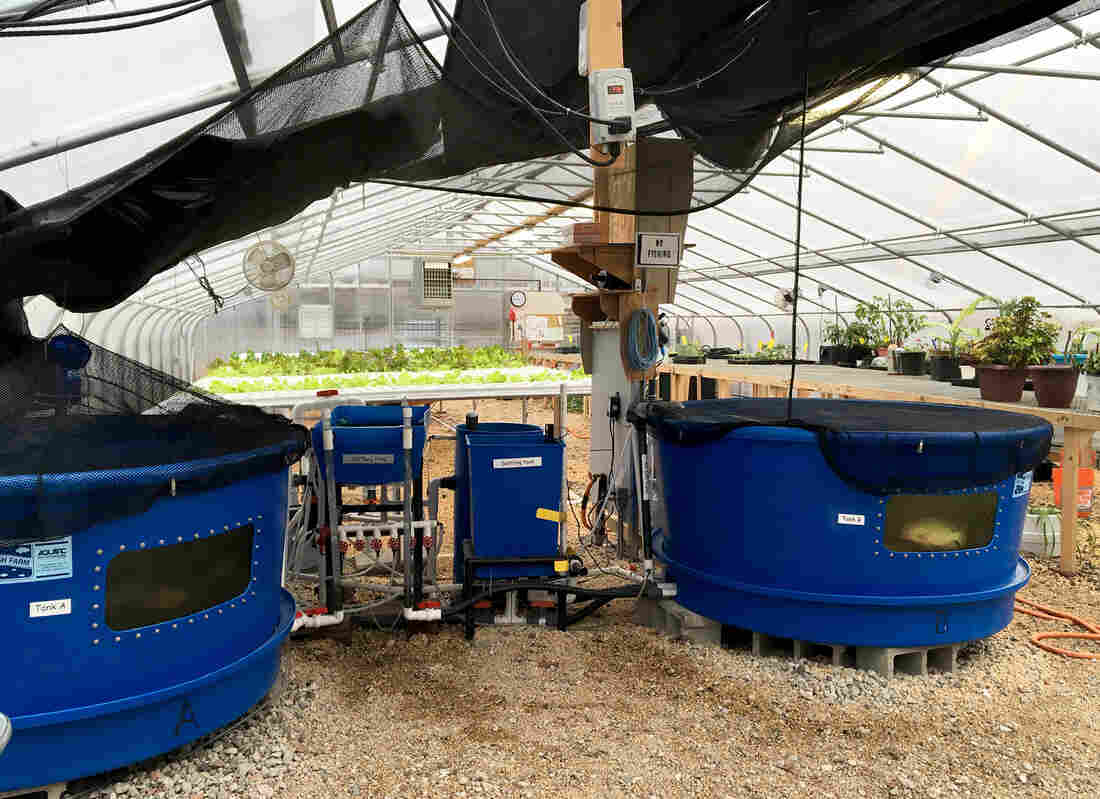 About 300 tilapia are being raised in a greenhouse paid for by companies who may have polluted the Passaic River. It's run by Rutgers University's Veterans Environmental Technology and Solutions program. Sarah Gonzalez/WNYC hide caption 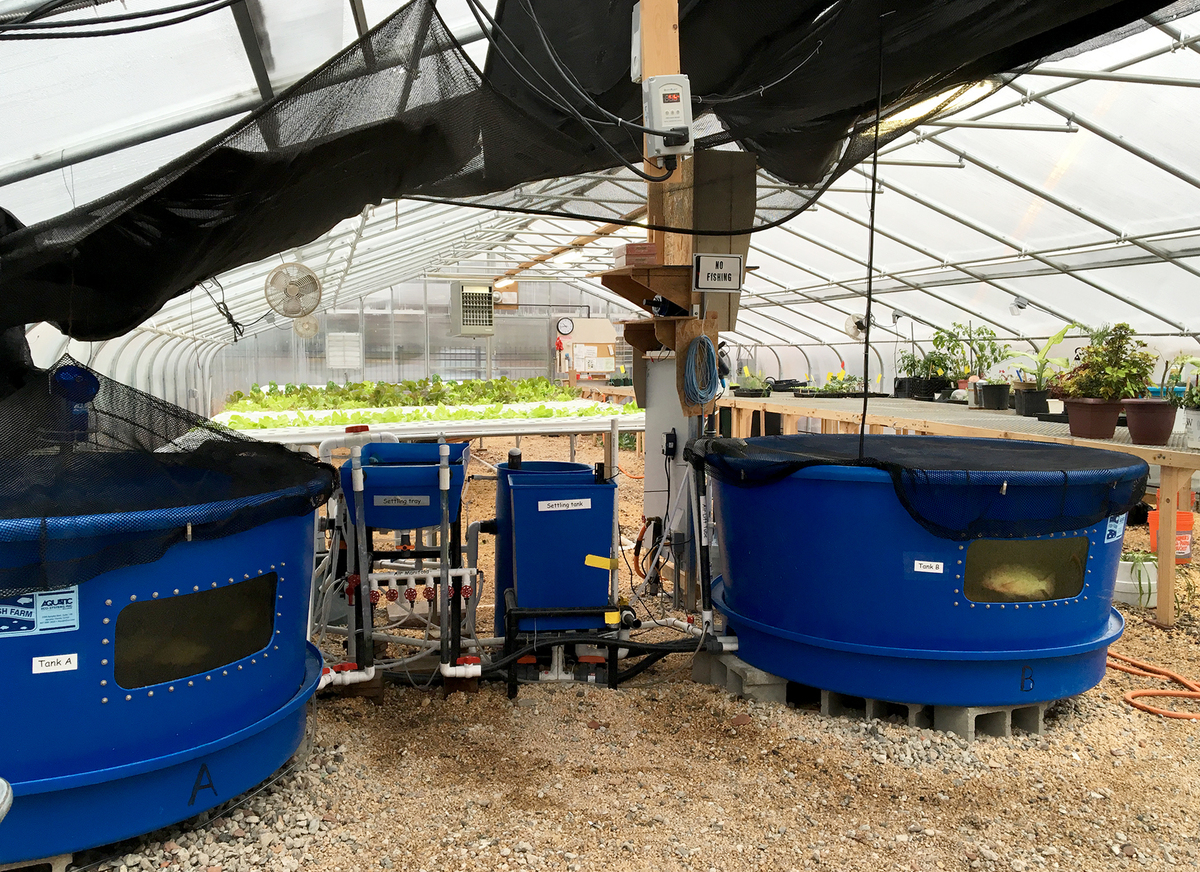 About 300 tilapia are being raised in a greenhouse paid for by companies who may have polluted the Passaic River. It's run by Rutgers University's Veterans Environmental Technology and Solutions program.

Advocates think the fish exchange is a diversionary tactic to avoid cleaning up the Passaic. But the polluters and Walter Mugdan with the Environmental Protection Agency's Region 2 office agree the fish swap is not a solution.

The EPA wants the polluters to replace two feet of toxic mud from the river bottom with clean rocks, sand and gravel. It's a $1.7 billion cleanup — one of the largest proposed sediment removals in the history of the EPA's Superfund program.

The polluters want to fund a cheaper, targeted cleanup that spokesperson Jonathan Jaffe calls "a sensible alternative" that would "use science to direct the remediation."

Jaffe says that the EPA's proposal is, "destined for years of conflict and litigation."

But the EPA says the polluters don't get a say in how to clean the river.

"We make the decision," Mugdan says. "That's not something that we negotiate."

Meanwhile, it could be decades before the fish is safe to eat again. And residents like Oswaldo Avad may continue to dismiss the potential health risks.

"I've been eating this fish for eight years," Avad says. "I feel fine."