Accessibility links
'Lolita' And Lollipops: What Nabokov Had To Say About Nosh : The Salt Vladimir Nabokov was an indifferent eater, but his writing made sumptuous use of food. Fans will enjoy unearthing links between his fiction and private life in a new collection of letters to his wife. 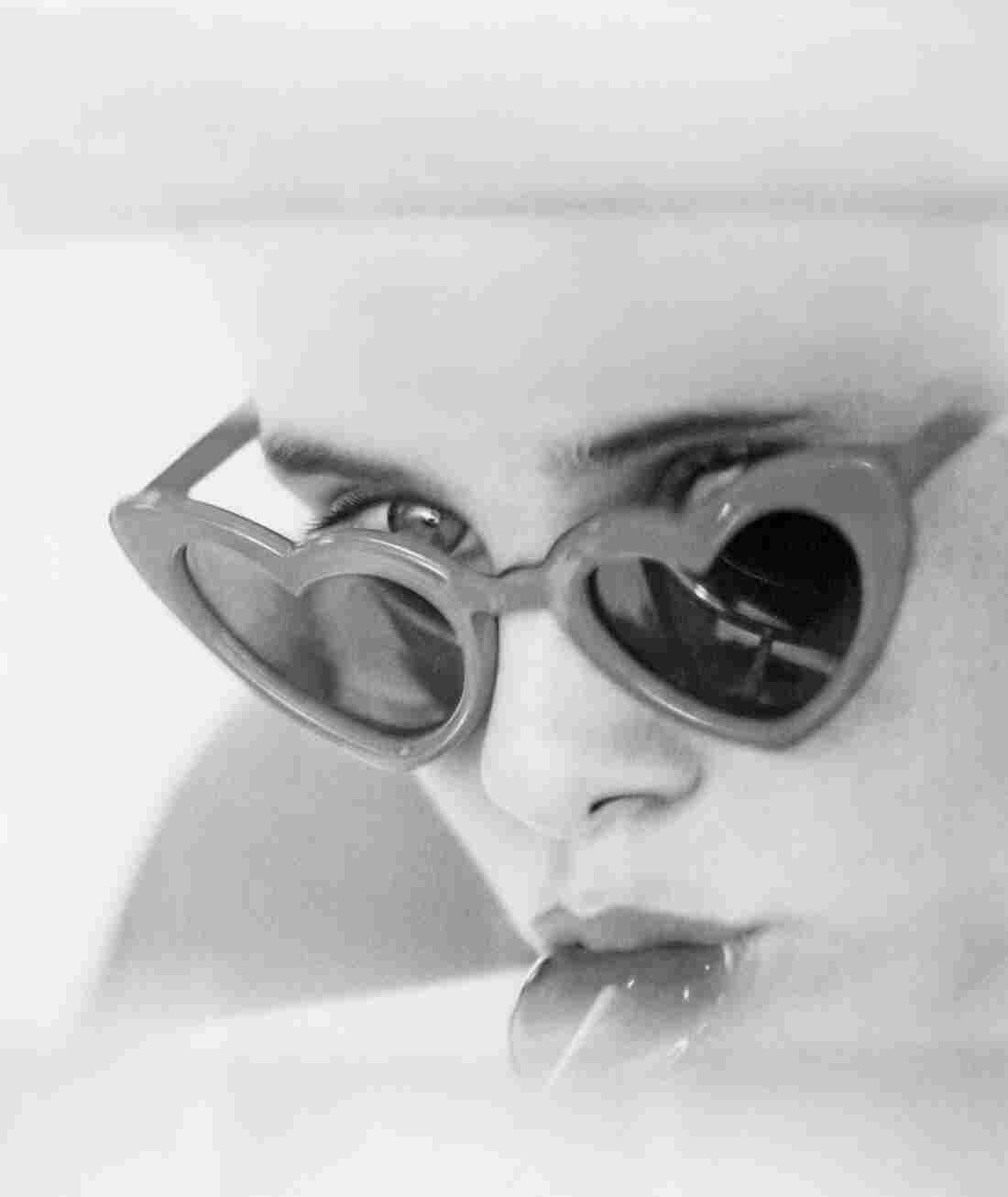 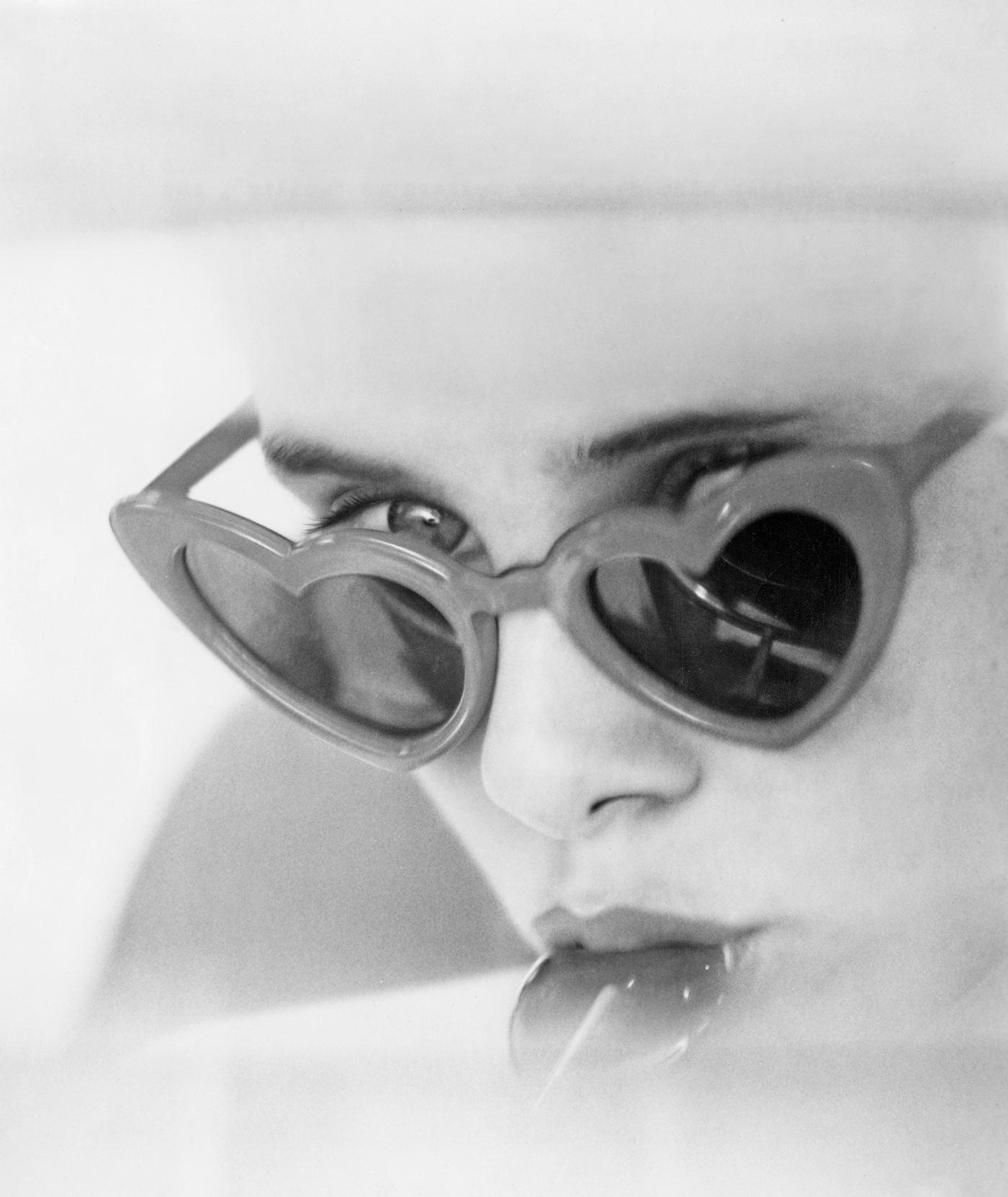 Actress Sue Lyon eats a lollipop as Dolores "Lolita" Haze in a scene from Lolita, the 1962 film adaptation of Vladimir Nabokov's novel. Nabokov made sumptuous use of food in his writing, and the acoustic affinity between Lolita and lollipops is no coincidence.

As a master of the eccentric metaphor, the great Russian-American novelist Vladimir Nabokov used food to fine effect in his writing.

There was, for instance, that one word he used to capture the texture, tinge and luster of his watery green eyes — "oysterous." And that icky image in Lolita, of motel floors burnished with the "golden-brown glaze of fried-chicken bones," that somehow made those shiny floors complicit in the squalor of pedophilia.

But when it came to eating, he really couldn't be bothered.

Nabokov's paradoxical relationship with food — his sumptuous use of it as a writer and his serene indifference to it as an eater — is vividly apparent in the recently published Letters to Véra, a collection of the missives he wrote to his beloved wife over 50-odd years. Almost every letter in this enchanting and mischievous collection is a passionate love letter addressed to his darling Mothikins, Mousie, Poochums, Kitty-Cat, Kidlet and a torrent of other endearments he conjured up. 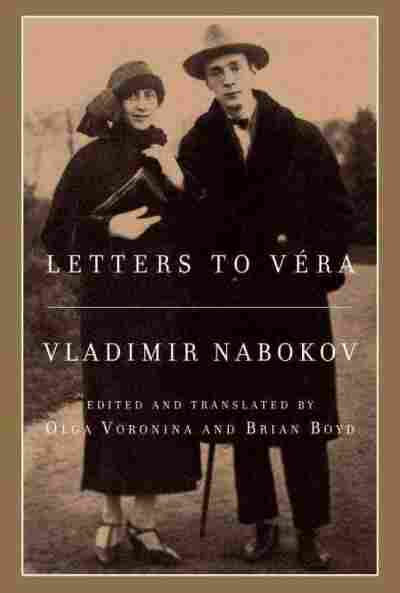 Véra was her husband's first reader, editor, typist, agent, archivist, muse, protector (she carried a pistol in her handbag), chauffeur and gofer. But cooking wasn't part of this accomplished arsenal. Campbell's soup was often supper at the Nabokov house.

Not that anyone was complaining. As Nabokov told fellow novelist James Salter, he didn't attach "too much importance to food and wine."

This is comically evident in the letters he wrote to Véra in the summer of 1926, when, a year after they were married, Véra, suffering from depression, weight loss and anxiety, was admitted to a sanatorium in Switzerland.

Over the next two months, Nabokov kept his promise of sending her a daily bulletin, which included a scrupulous itemization of his meals. Listing every meal he ate was clearly a drudgery, but he hurried on with it by squashing the menu between parentheses: "(A couple of meatballs — cold-cuts, sausage, radishes)"; "(cold-cuts, fried eggs, a cold meatball)"; or "(liver and gooseberry jelly — a sort of frog caviar)." Occasionally, there was a dry barb: "incomprehensible meat," and more rarely, a stab of praise, "magnificent blueberry soup." But mostly it was a boring plod of cold cuts and compotes.

Once, he reported with relish, "I bought and ate a large, warty, crooked pickle," but this active seeking out of food was rare.

"It's not that Nabokov wasn't interested in food," Brian Boyd, the eminent Nabokov scholar who co-edited the Letters, told The Salt. "But in his letters to Véra he was reporting dutifully on what he ate, and since his German boardinghouse fare appealed very little, his descriptions, as it were, quickly scrape the plate into the receptacle of the day's letter."

When Nabokov isn't listing his meals at gunpoint, his letters gleam with gorgeous, witty food metaphors. Such as his droll report of a Basque vendor on the beach selling "huge waffles, like corsets." Or his careful account of a morning Berlin sky: "dullish, but warm, a boiled-milk sky, with skin — but if you pushed it aside with a teaspoon, the sun was really nice." 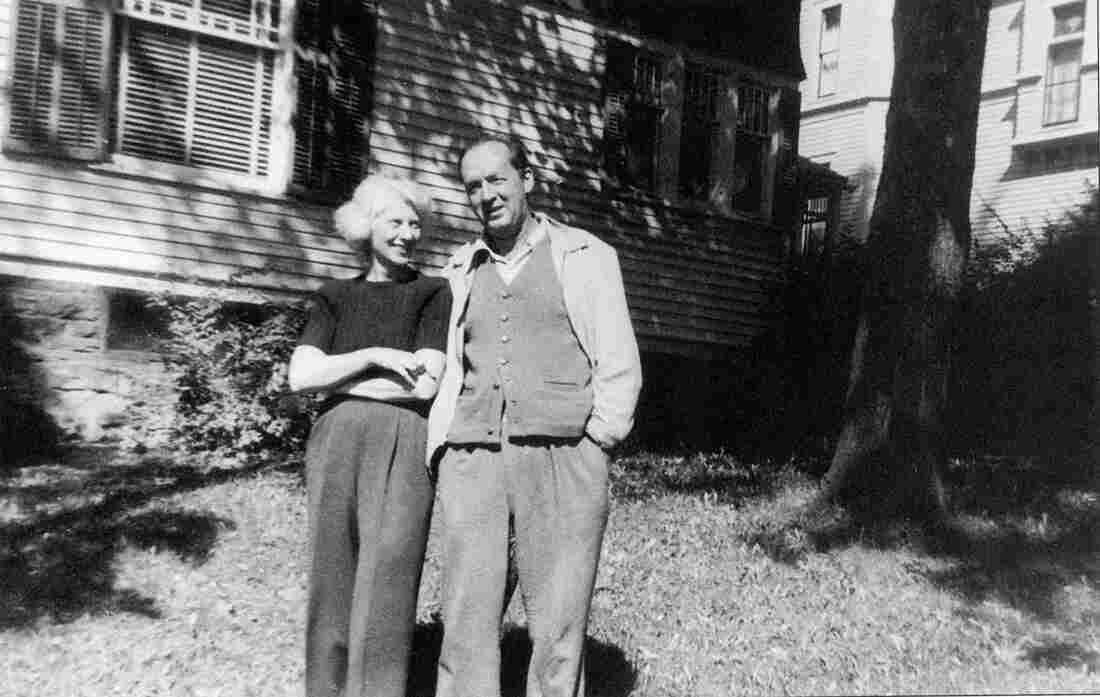 Vladimir and Vera Nabokov outside their rented home in Ithaca, N.Y., in 1951. There, Nabokov completed his autobiography and began Lolita. Courtesy of The Estate of Vladimir Nabokov hide caption

toggle caption
Courtesy of The Estate of Vladimir Nabokov 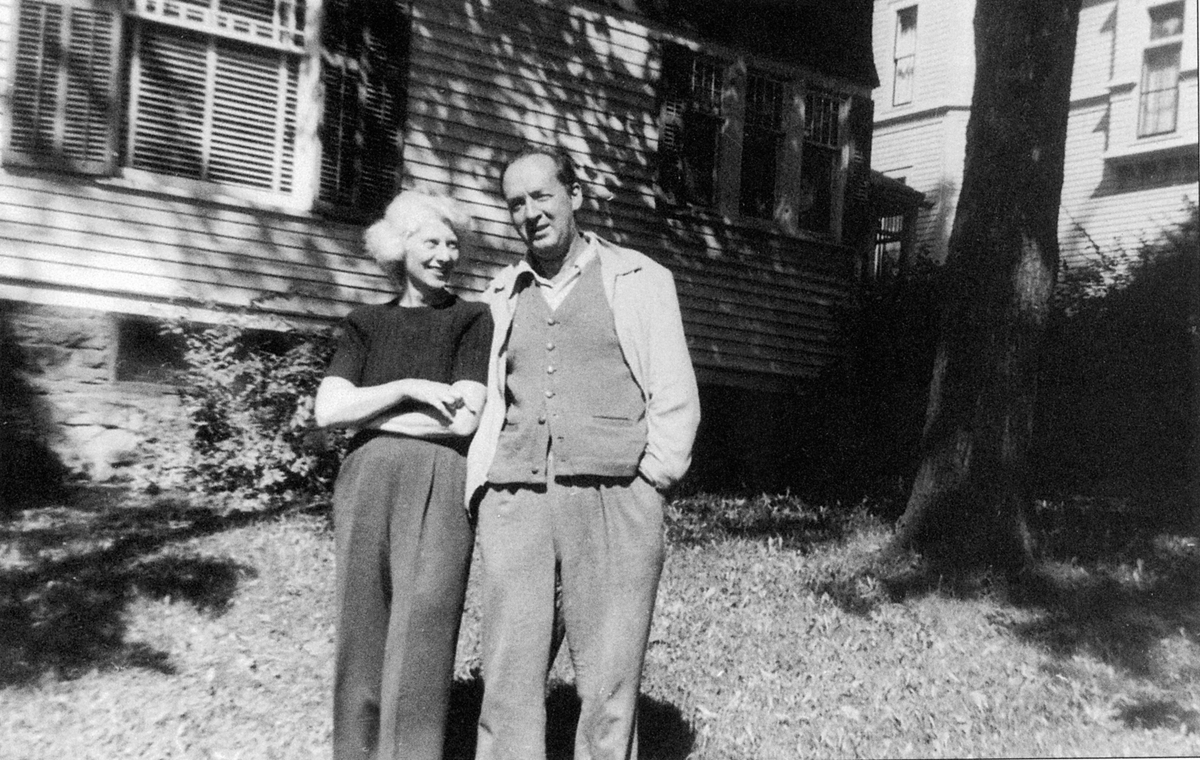 Vladimir and Vera Nabokov outside their rented home in Ithaca, N.Y., in 1951. There, Nabokov completed his autobiography and began Lolita.

Courtesy of The Estate of Vladimir Nabokov

This consummate ability to beguile with imagery of subjects he knew little about was a Nabokovian hallmark, says Boyd. "Just as he couldn't drive a car, but offers priceless descriptions [in Lolita] of traveling America by road, Nabokov could write about food without knowing how to prepare a meal any more complicated than a boiled egg," he says.

Or take that image from a 1924 letter of the streetlamps in Prague burning "with a warm and sweet luster, like well-licked punch lollipops." That "well-licked" — an exquisite touch evoking the sticky fuzz of lamplight — would be recycled years later to evoke Lolita's "red as licked red candy" lips.

The acoustic affinity between lollipop and Lolita isn't a coincidence, either. As Nabokov grumbled, Americans mispronounced Lolita "Low-lee-ta, with a heavy, clammy 'L' and a long 'o'," when in fact, "the first syllable should be as in 'lollipop', the 'L' liquid and delicate, the 'lee' not too sharp."

In Invitation To A Beheading, a novel Nabokov wrote when Hitler and Stalin were on the rise in Europe, food becomes a vehicle of moral revulsion in the scene where the prison director avidly consumes the prisoner's final meal that the prisoner himself can't bear to touch. When the condemned man asks how long he has left before his beheading, the jailor replies, "Excellent sabayon!"

"Sabayon or zabaglione is made from eggs, sugar and scented wine or fruit juice beaten over hot water until thick and light, and served warm or cold in a glass," says Boyd. "The surreal luxury of the meal that the prisoner spurns and the director scoffs, the false or inverted civility of every process in this condemned cell, encapsulates the weird discords and distortions of the novel."

But this is tame compared to what Nabokov does with food in Ada, his longest and most complex novel, whose plot is coiled around incest and cruelty. Decadence is embodied in the last supper a besotted Lucette shares with her half-brother Van Veen aboard a cruise liner. They eat roast bearlet (bear cub) and grugru shrimp, which is the plump yellow larvae of the palm weevil, followed by "sweet, thick Turkish coffee." Shortly after this grotesque repast, a despairing Lucette vomits out a "pink pudding" of vodka cocktails and jumps into the ocean, drowning even as she "heaved with anise-flavored nausea."

Contrast this gastronomic hell with that poignant scene from Nabokov's short story Signs and Symbols, of an old couple seeking solace over cups of midnight tea. It has been a hard day for them. They have been unable to give their son, who is in a mental institution, his birthday gift of "ten different fruit jellies in ten little jars," because he has had tried to kill himself. Awakened by telephone calls (it's a wrong number), they decide to have some tea:

"They sat down to their unexpected, festive midnight tea. He sipped noisily; his face was flushed; every now and then he raised his glass with a circular motion, so as to make the sugar dissolve more thoroughly. The vein on the side of his bald head stood out conspicuously, and silvery bristles showed on his chin. The birthday present stood on the table. While she poured him another glass of tea, he put on his spectacles and reexamined with pleasure the luminous yellow, green, and red little jars. His clumsy, moist lips spelled out their eloquent labels — apricot, grape, beach plum, quince. He had got to crab apple when the telephone rang again."

Who could it be? We aren't told, but sense, sinkingly, that the bejeweled scene with hot tea and rainbow jellies can only be a set-up for doom.

Nabokov and Véra, too, loved miniature assorted jellies, and ate them straight from the jars with a spoon — just one more comfortable idiosyncrasy of a happy marriage.