Accessibility links
Why The Southeast Could Become The Napa Valley Of Oysters : The Salt Oysters from the Pacific Northwest have long been the most coveted for their sweet, mild flavor. But they now have more competition from Southeast oysters cultivated from Virginia down to Florida. 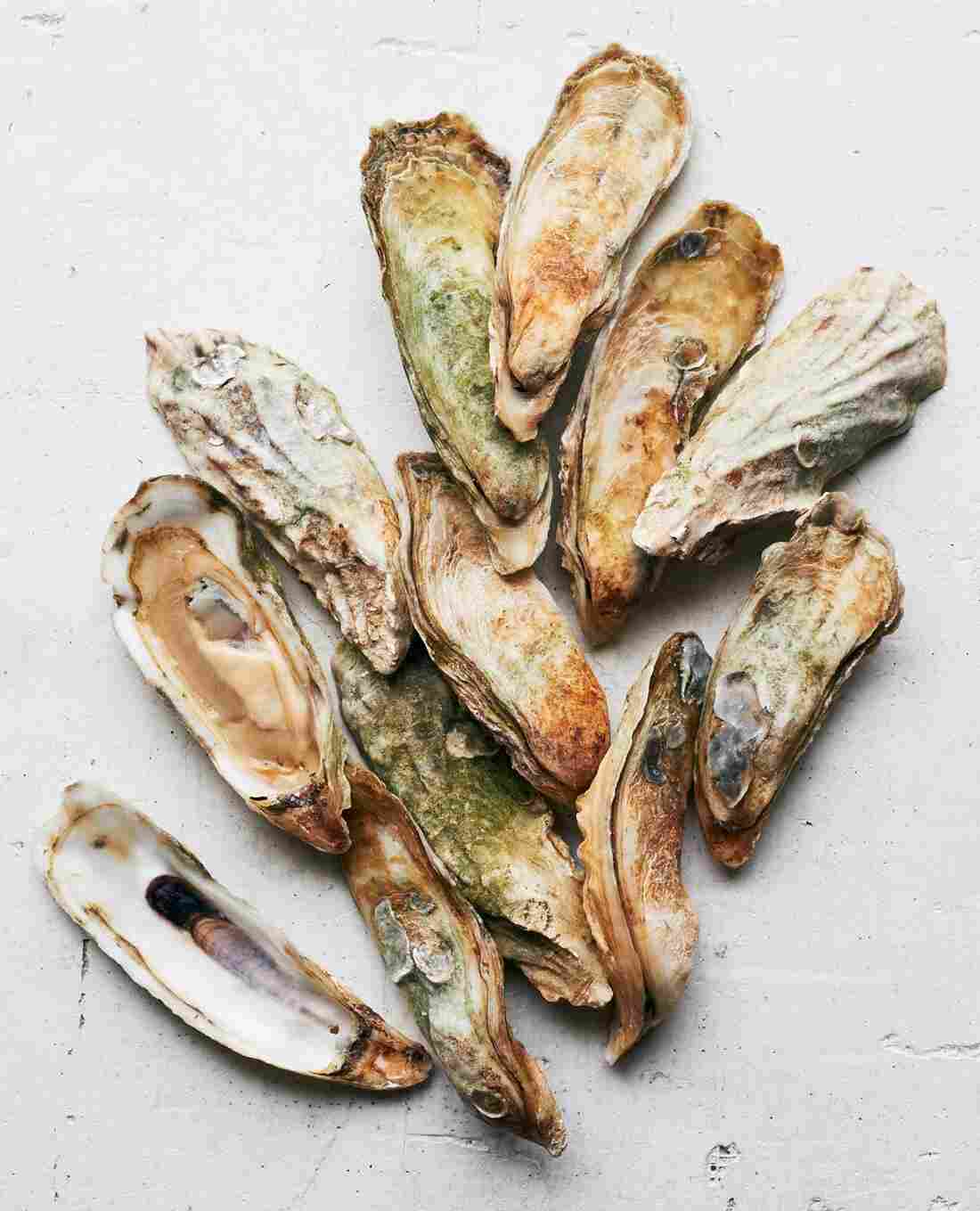 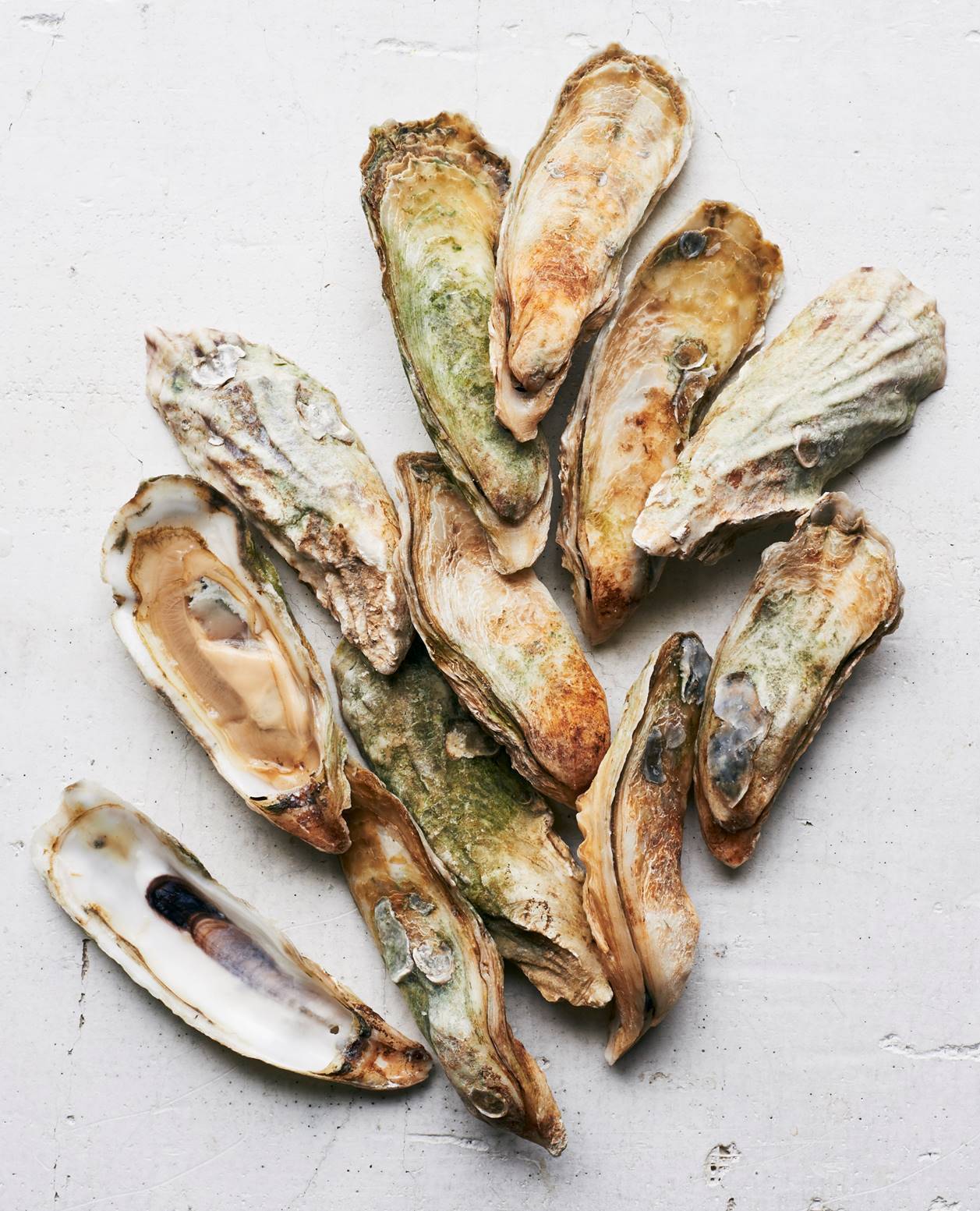 Capers Blades "singles on a half shell" oysters grown by farmer Dave Belanger (aka Clammer Dave) in Capers Inlet, S.C.

Oysters are the sea's version of fine wine: Their taste varies with the water they grow in. And slow-growing oysters from northern waters — like the briny Wellfleets of Massachusetts and the sweet, mild Kumamotos of the Pacific Northwest — are among the most coveted.

That may be changing now. An oyster renaissance in the Southeastern U.S. is underway — from Virginia all the way down to Florida's Apalachicola Bay. The region is adopting the aquaculture that restored a decimated oyster industry in the north, and it has led to a huge boost in oyster production.

"The oyster industry is now casting its eye down the Southeast coast and seeing paradise," says Rowan Jacobsen, author of The Essential Oyster: A Salty Appreciation of Taste And Temptation to be published in October. "More than 6,000 miles of shoreline unmarred by a single metropolis and all ripe for growing oysters."

Americans already eat roughly 2.5 billion oysters every year, according to the Oyster Recovery Partnership. Around 85 percent of those oysters are from the Atlantic coast, and most start as hatchery-reared seeds that are "farmed" and raised in the ocean to be the plump, glistening "singles on a half shell" that oyster lovers prize. Oysters on the half shell also sell for three times as much as a wild oyster.

The Historic Allure Of A Late Night Oyster

Appetite For Gulf Seafood Is Back, But The Crabs And Oysters Aren't

Southern states such as Georgia and the Carolinas have until now been known for wild oyster reefs that cluster in fantastical moonscapes. They are the result of "spat" — free swimming oyster larvae — that settle on other oysters and grow upon them. The clusters need to be hammered and pried apart in order to be served as succulent singles. That extra work, along with the fact that in warm months southern oysters are more susceptible to an infection called Vibrio vulnificus, has limited their appeal.

Aquaculture has changed that, and Virginia leads the way. The state turned to Standish Allen of the Virginia Institute of Marine Science, to develop a triploid oyster from the common Crassostrea virginica, one that was already native to Virginia's waters.

Triploids are grown in hatcheries and then "tended" in the ocean. They are widely used today, because they have three sex chromosomes instead of two, which renders them sterile — allowing them to put all their energy into growing. As a result, they reach plump maturity in less than two years (as opposed to a wild oyster's three years). They are the "seedless watermelons" of the seafood world.

Cultivated oysters live in protective cages or floats, but they still attract marine life, from grass shrimp to crabs, that benefit the ecosystem. And, since every oyster filters and purifies 50 gallons of water a day— while feasting on algae and removing organic and inorganic particles from the water — this is one food that actually improves the ecosystem. 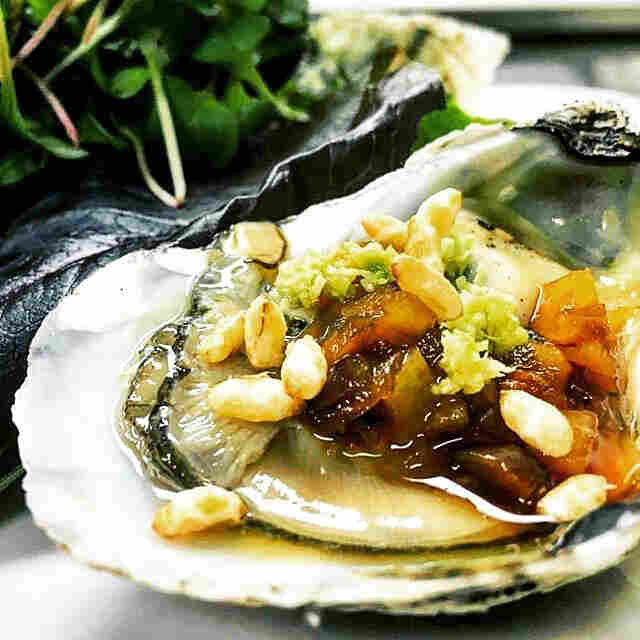 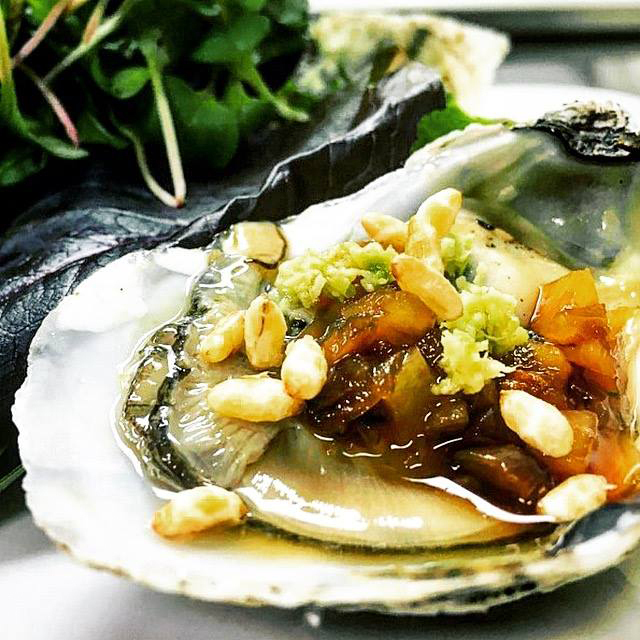 In 2014, Virginia shellfish farmers sold nearly 40 million oysters, generating around $17 million in revenue, according to the Virginia Institute of Marine Science. The success — and praise from the culinary world — has been so resounding that in 2015, Governor Terry McAuliffe launched the Virginia Oyster Trail, modeled after the state's popular wine trail. The Oyster Trail tour covers seven distinct geographic regions, each producing oysters with a unique flavor, from the sweet mollusk magic of the Rappahannock River to the salty tastes of the Eastern shore.

"Just like the chardonnays of California, what you taste on the Oyster Trail is expressive of each locale," says Ryan Croxton, who co-owns the Rappahannock River Oyster Company in Topping, Va., with his cousin Travis.

Virginia's success has inspired its neighbors down the coast; now both North and South Carolina have taken up the oyster challenge. The Shellfish Research Hatchery at the University of North Carolina in Wilmington is developing triploid oysters from wild stock that naturally thrive in North Carolina waters. "The demand is incredible. I can't keep up with it. We are growing 2 million oysters a year right now and selling every last one," says former Marine Frank Roberts, who started Lady's Island Oyster Farm in Beaufort, S.C., in 2007.

Curtis Hackaday, chef at 1703 Restaurant and Catering in Winston-Salem, N.C., says he's been inspired by the new tide of regional oysters. "I wanted our restaurant to be known for odd but delicious oyster recipes," says Hackaday. Lately he's been serving them with pineapple, pickled garlic, fresh wasabi and puffed ground rice. "We think of ways to add spicy, sweet, and crunchy to go along with the briny of the oyster." 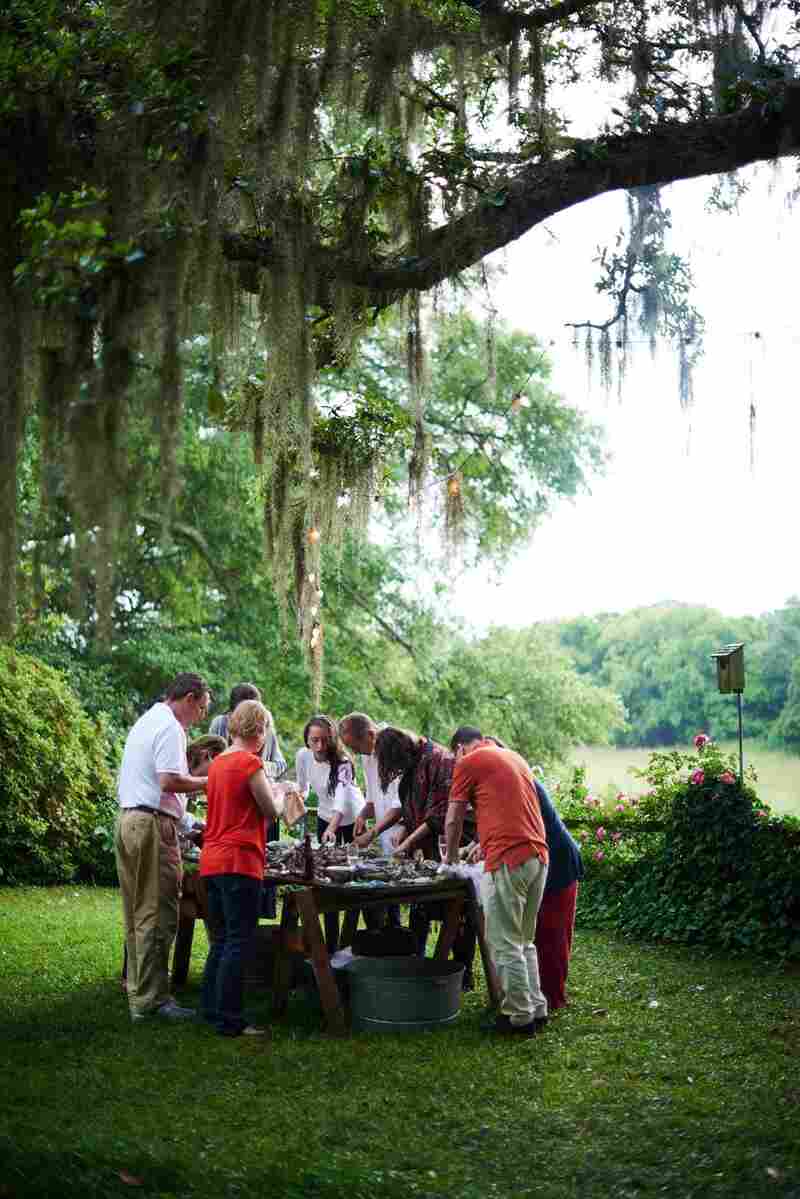 A low country oyster roast featured in The Essential Oyster, a book by Rowan Jacobsen to be published by Bloomsbury in October 2016. David Malosh/Bloomsbury hide caption 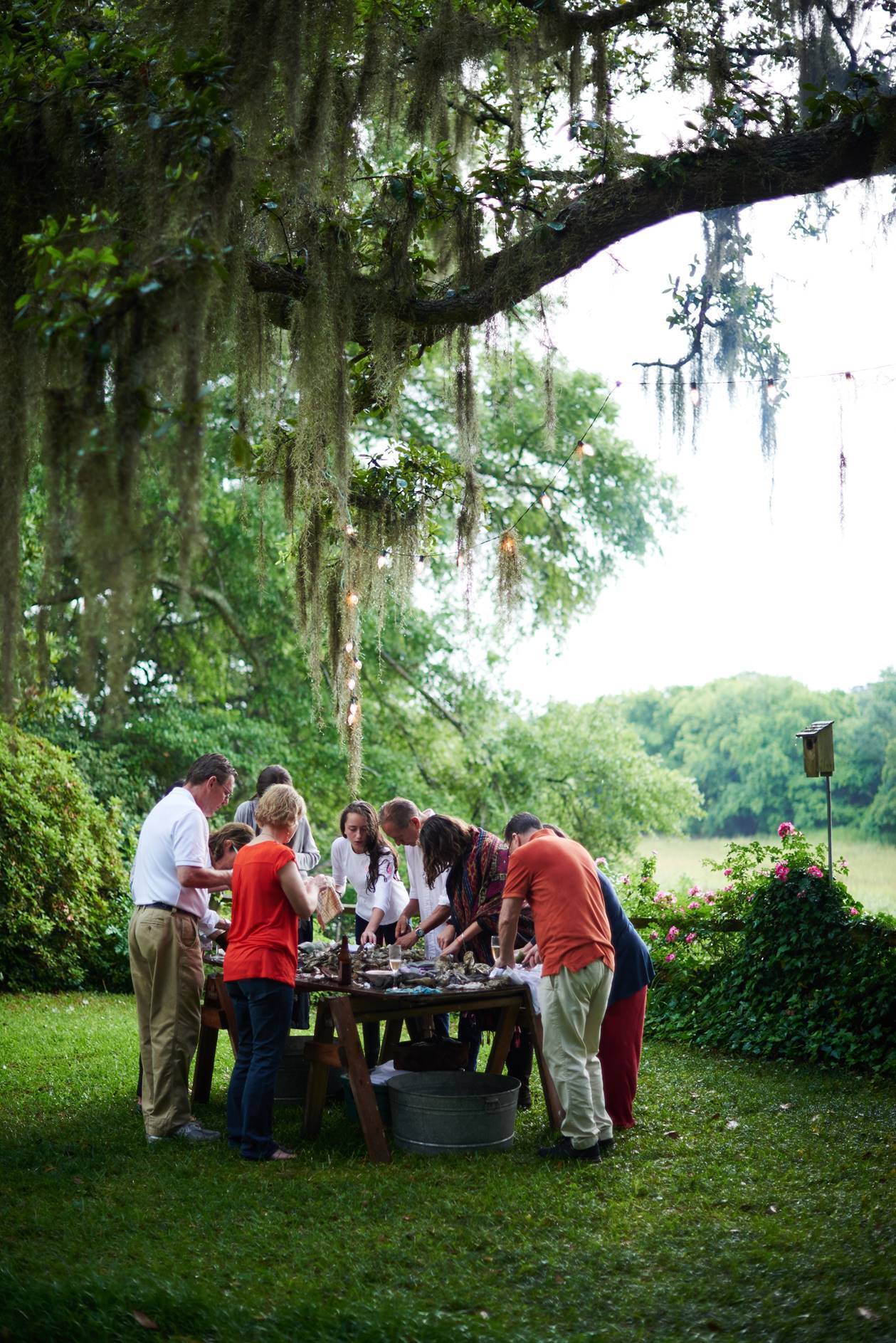 A low country oyster roast featured in The Essential Oyster, a book by Rowan Jacobsen to be published by Bloomsbury in October 2016.

Georgia has just launched its first oyster hatchery on Skidaway Island near Savannah, according to Thomas Bliss, director of the Shellfish Research Laboratory at the University of Georgia. "The hatchery produced 200,000 seedlings in 2015," which were handed out to 10 different oyster growers to raise in heavy mesh bags laid in the coastal waters, he says. "We hope to be producing five million a year by 2018."

Georgia is interested in pursuing the kind of floating aquaculture cages that rest in the water (rather than the muddy bottom), similar to those used farther north. It is called "farming off the bottom," and allows farmers to keep the oysters clean and safe, and to shake them in their cages to prevent them from clumping together. In addition, oysters can be grown in saltier waters that would usually attract predators, giving that mix of salty and sweet that is so prized.

Florida just changed its laws to allow this kind of oyster farming. The state already farms a lot of clams, and is doubling down on oysters after drought and the Deepwater Horizon oil spill depleted its abundant oyster stock.

Author Rowan Jacobsen says he once called the Southeast "the sleeping giant of the oyster world." But now, he says, "the giant isn't sleeping anymore. With the warm south's longer season and faster growth, they can undercut northern producers on price, and they are poised to become a staple at oyster bars across North America."

An earlier version of this post stated that Ryan and Travis Croxton are brothers. In fact, they are cousins.