Accessibility links
Guest Workers, Legal Yet Not Quite Free, Pick Florida's Oranges : The Salt Most workers who are picking oranges in Florida are temporary "guest" workers from Mexico. They have signed contracts to work only for growers who arranged their visas and provide their housing. 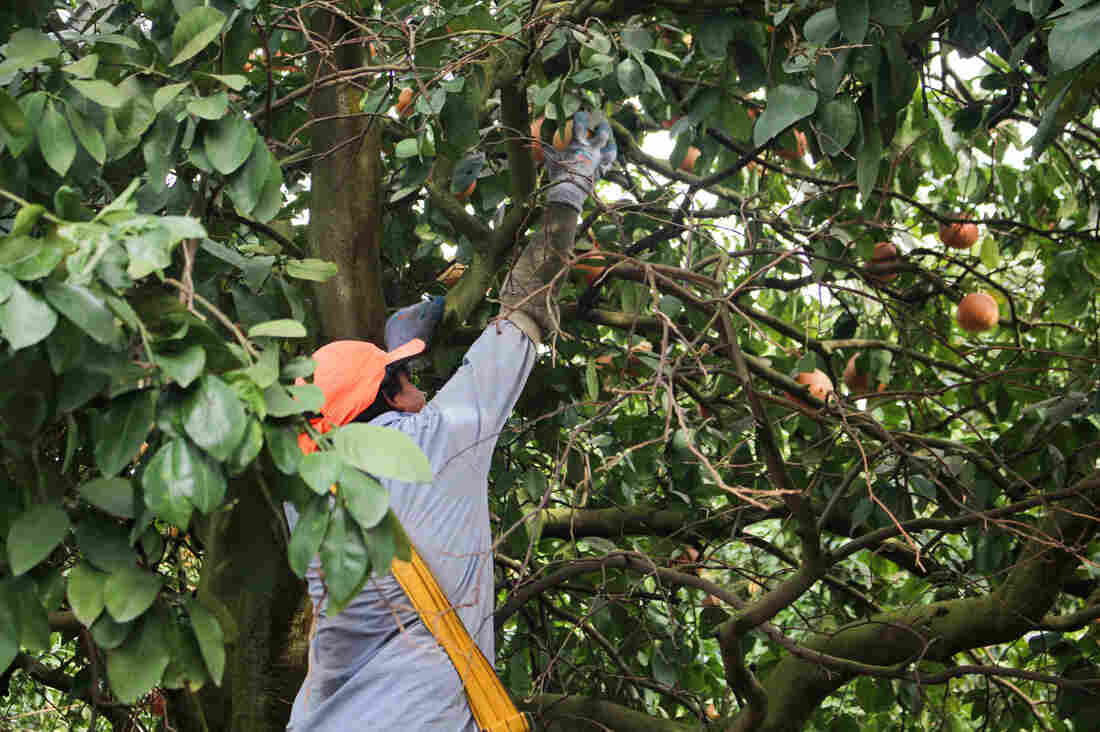 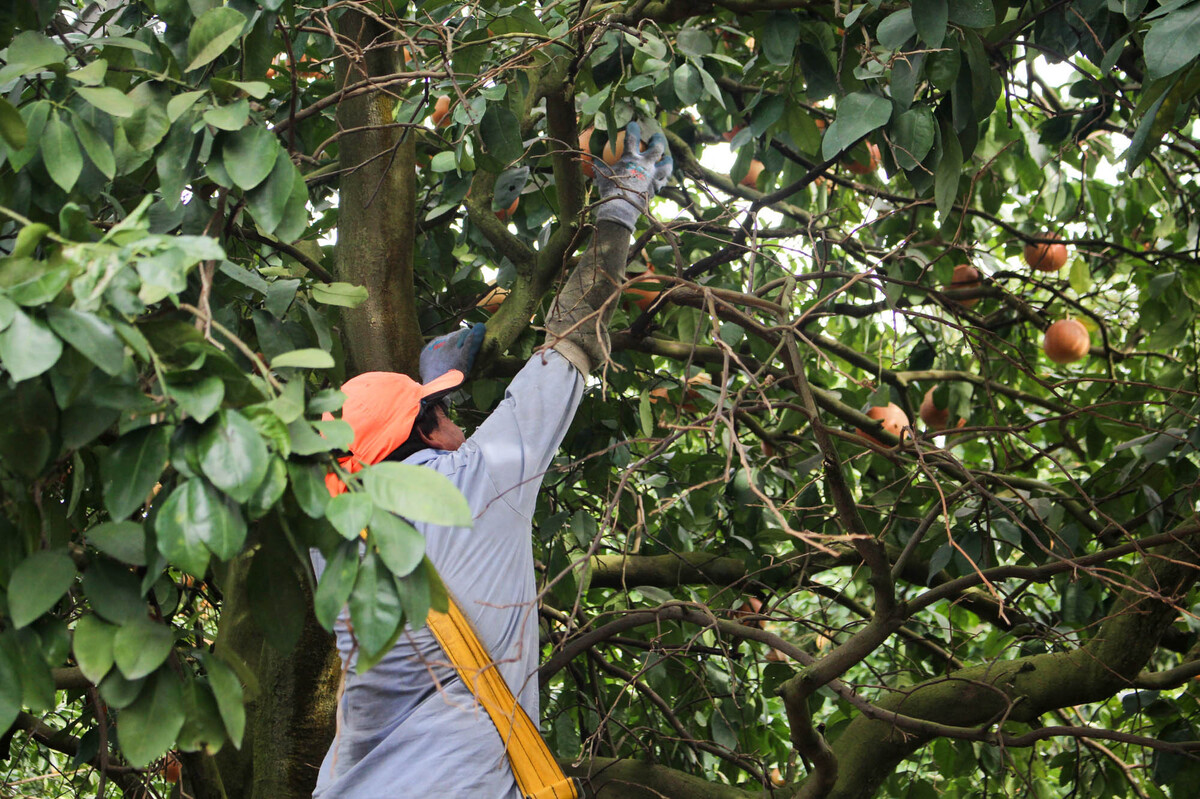 In citrus-growing areas, you see lots of old converted school buses on the road; these are company buses, carrying the workers who will harvest oranges and grapefruit. And in the evening, some of those buses roll into a truck stop on a two-lane country road south of the town of LaBelle. Young men scramble out, trot into the store and line up at the taco counter.

This is where I met Esteban Gonzalez and his brother Isaac, from the Mexican state of Veracruz.

They are part of a small army of "guest" workers who now pick most of Florida's citrus crop. Employers are allowed to bring in such seasonal farmworkers from other countries using a category of visa called H-2A.

For employers, the program involves some extra costs: They have to provide free housing for H-2A workers, and cover the costs of transportation here. 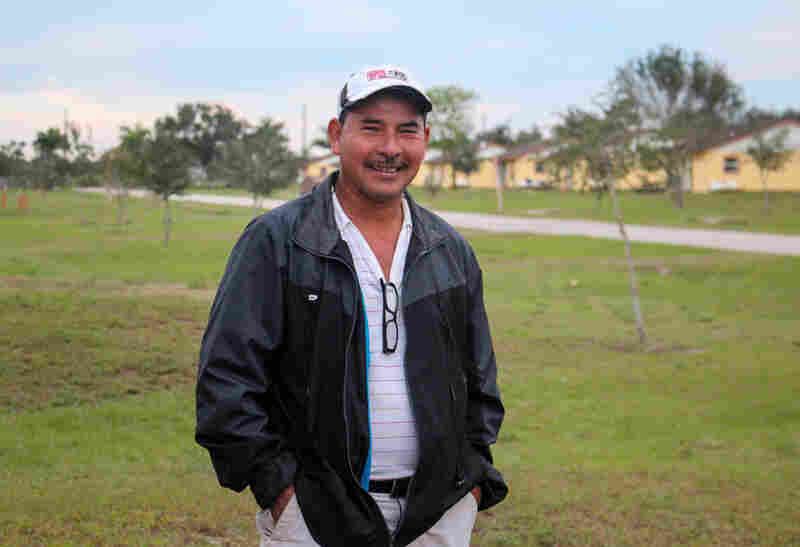 Esteban Gonzalez has spent most of each year, for the past eight years, as a guest worker in Florida. His family remains back home in Veracruz, Mexico. Dan Charles/NPR hide caption 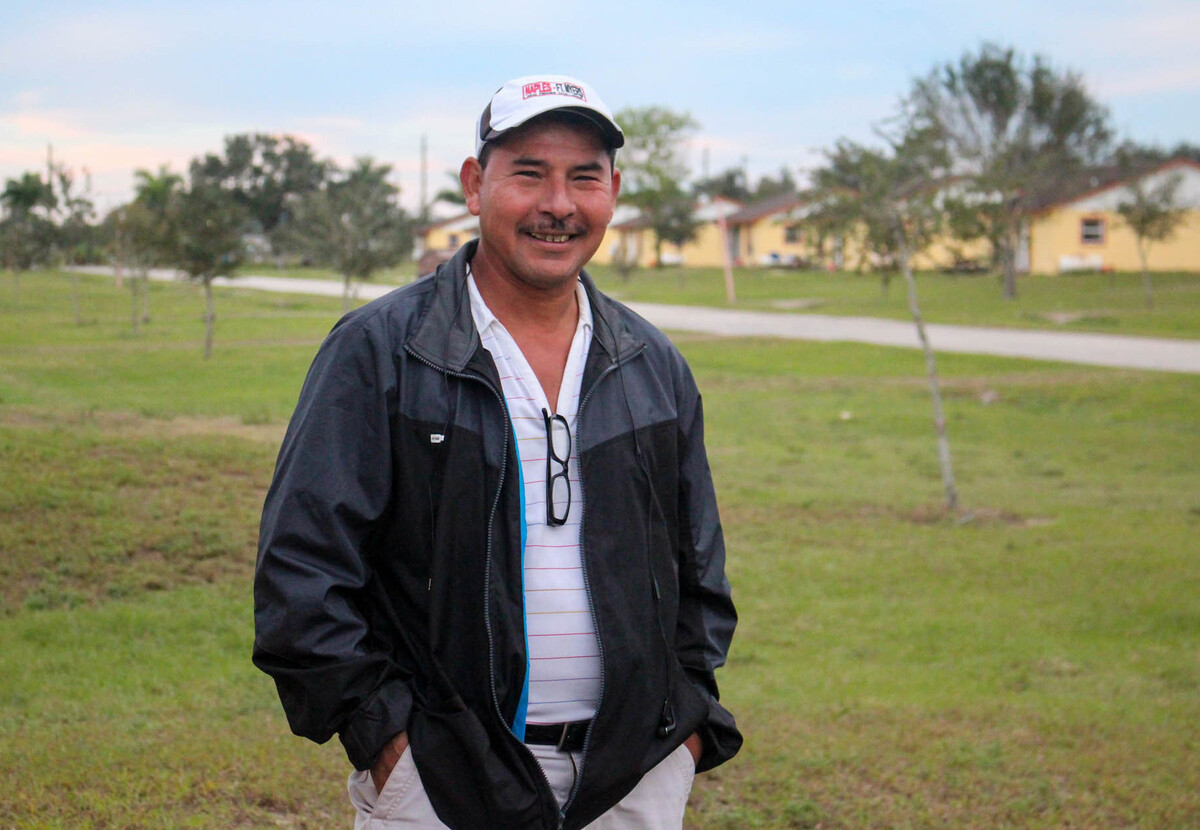 Esteban Gonzalez has spent most of each year, for the past eight years, as a guest worker in Florida. His family remains back home in Veracruz, Mexico.

They also have to pay a wage that the federal government considers fair. But the good thing — if you're an employer — is that workers on H-2As are only allowed to work for you.

And this is the reason that the H-2A program has become increasingly popular, especially among citrus growers.

The way Justin Sorrells tells the story it began with a single moment, 17 years ago.

"We were harvesting one of our family groves, with a harvesting crew," Sorrells says, "and directly across the street, there was another grove owner who was having trouble getting labor. So he walked across the street, went to our harvest crew, and offered them a nickel more per box to pick his oranges instead of ours. And the crew did that."

"And that was the day my father said, 'This is it. We have got to have more reliability in our labor force,' " Sorrells says.

His father could have offered the workers who had defected a little more money. But Sorrells says that would have led to never-ending negotiations with every work crew.

"We have been 100 percent H-2A since that day," Sorrells says. "We were the first company in the state of Florida to utilize H-2A labor in citrus."

They were the first of many. Just in the past five years, use of H-2A workers has boomed. Sorrells estimates that 85 percent of the workers currently picking citrus crops in Florida are foreign guest workers. It's expanding into other crops, too. Nationwide, about 140,000 farm jobs were filled by H-2A workers last year; that's twice what it was four years ago.

Esteban Gonzalez says he accepted the offer to come to Florida because there's not much work back home. Here in Florida, he's guaranteed a wage of $10.70 an hour and can earn more if he's a fast picker.

He's done this for part of every year since 2007. This year, his contract calls for him to spend eight months in the U.S. During the last two months of his stay, a labor contractor will take him by bus to Georgia to pick melons, and then to Indiana to detassel corn (a labor-intensive step in the production of hybrid corn seed). 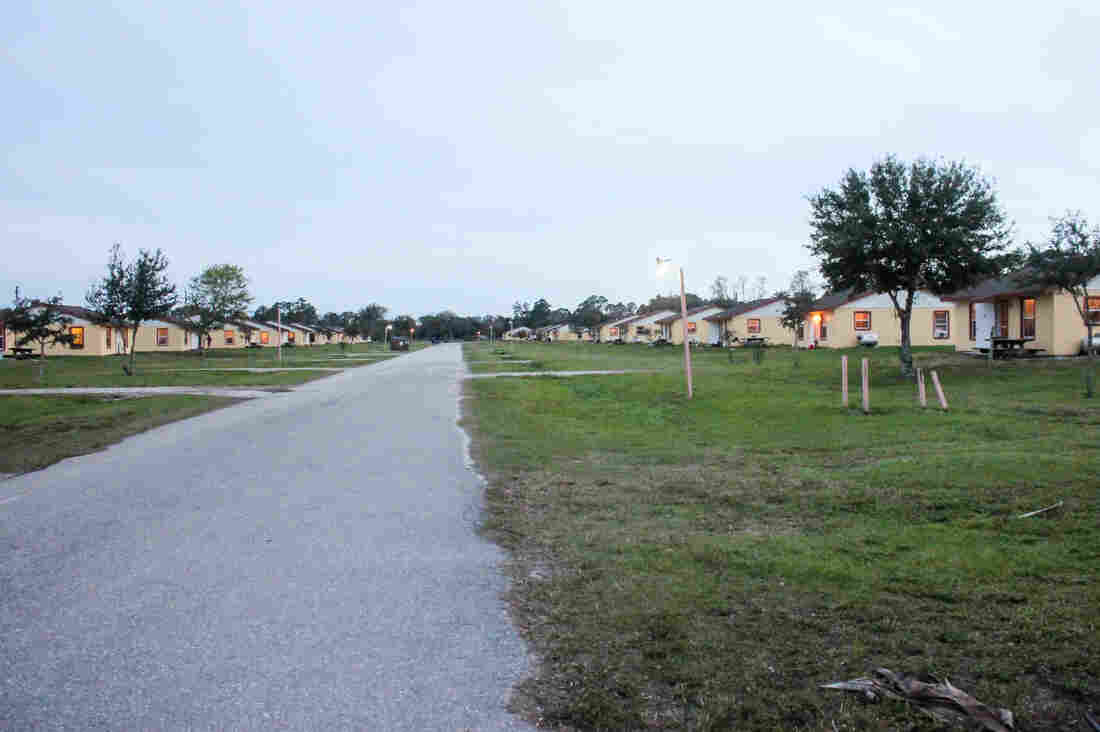 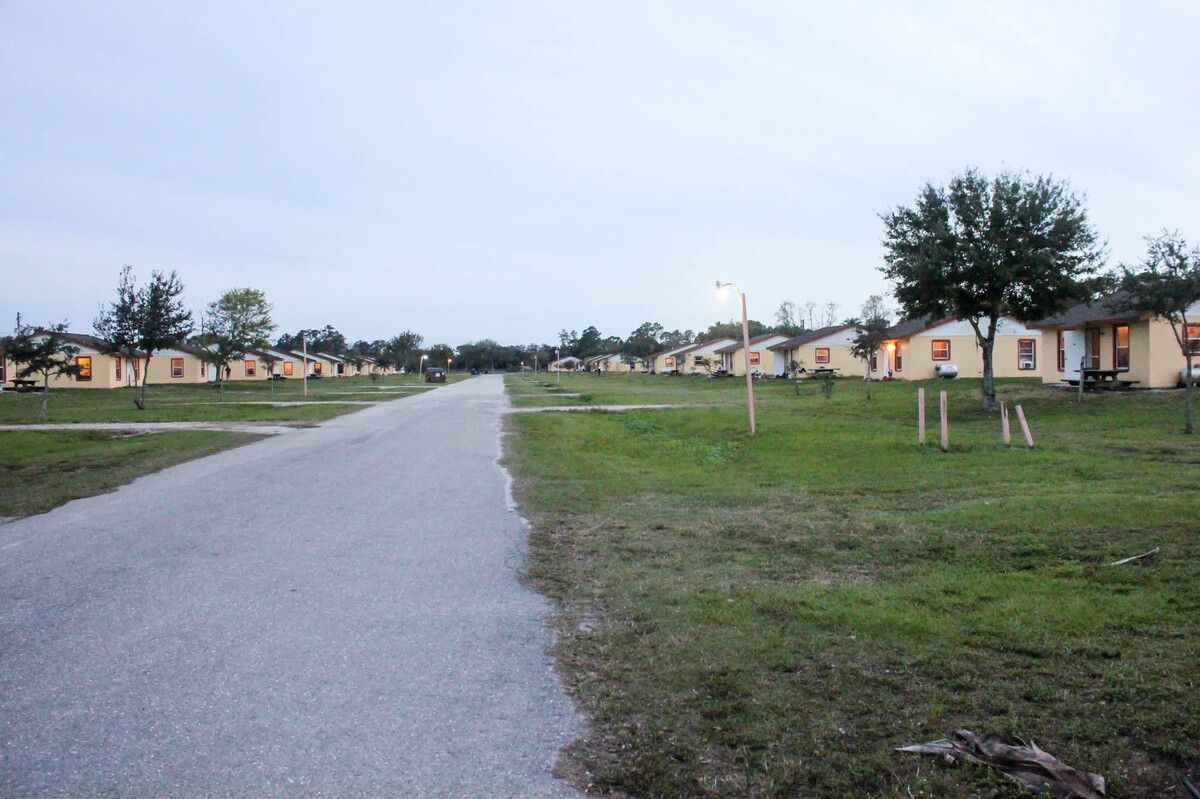 Some employers build special housing compounds just for their H-2A workers. About 300 workers live in this fenced compound.

When he's in Florida, he lives in a fenced housing compound behind the truck stop in LaBelle, in one of 30 identical yellow houses that were built to house H-2A workers.

In the back there's a room where 10 workers sleep. A couple of mattresses are just lying on the floor. In the front, there's a kitchen, but it's not very useful at the moment. The gas stove doesn't work at all, and the refrigerator isn't keeping things cool. There's a gallon container of milk, about a quarter full, sitting on the kitchen table.

Buses take these workers everywhere: to the citrus groves in the morning and back here again in the evening, with a stop along the way to pick up food.

It's an austere life, but Gonzalez says he's really only here to work. In fact, his main complaint is that there's not enough work. A disease called citrus greening has cut into Florida's harvest. "Last year and this one have been very difficult," Gonzalez says.

On this particular day, for instance, his work crew was assigned to pick one section of a grove, and it took only three hours, so he earned only about $30 for the day.

That has happened a lot, he says, and he does feel a little trapped. 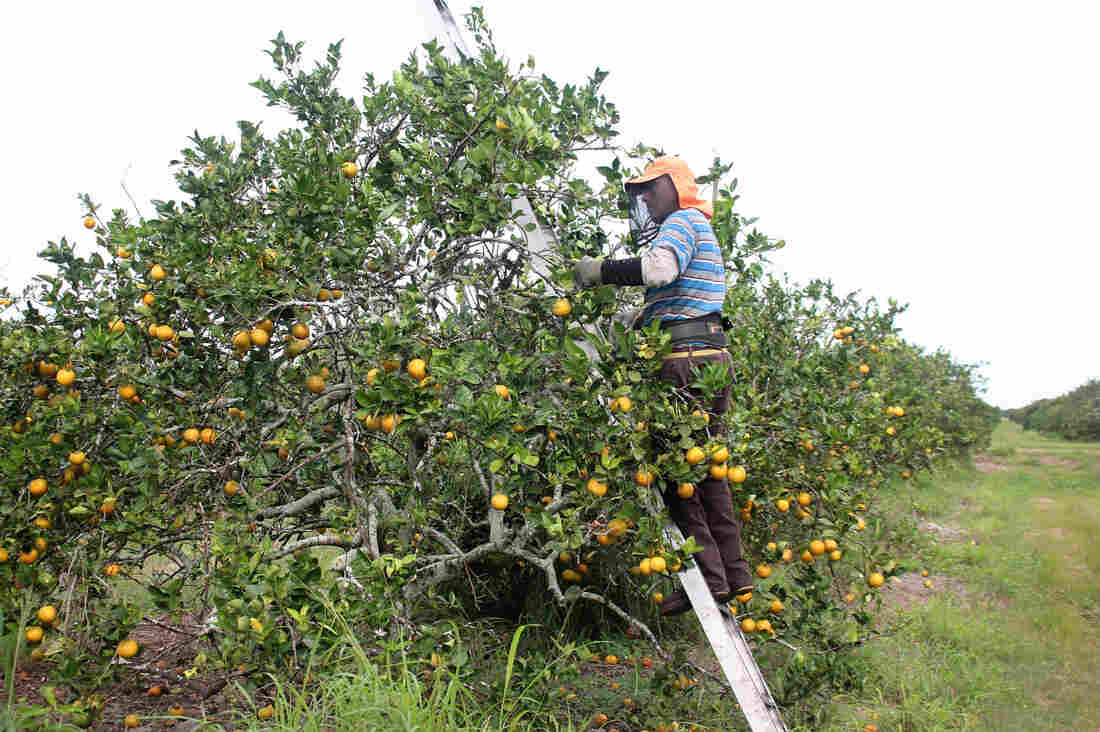 Harvesting oranges near Arcadia, Fla. The sacks that workers carry weigh about 90 pounds when they are full of fruit. Dan Charles/NPR hide caption 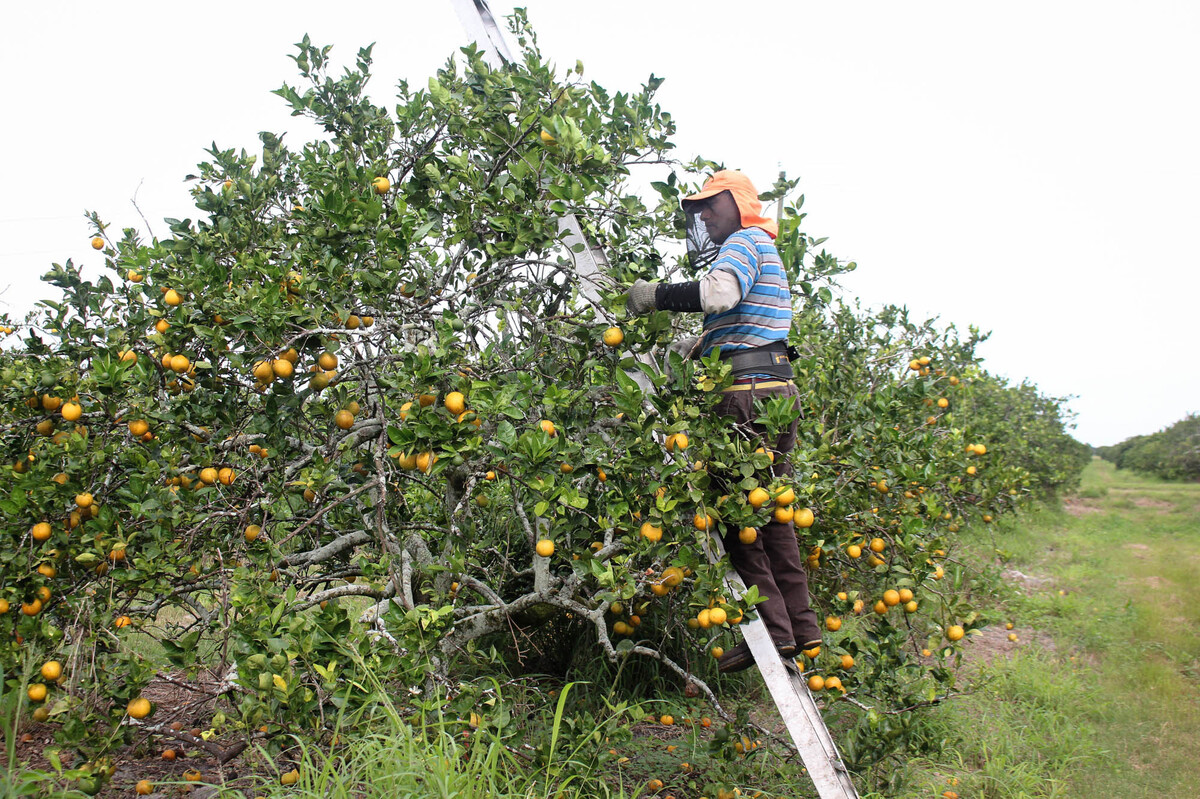 Harvesting oranges near Arcadia, Fla. The sacks that workers carry weigh about 90 pounds when they are full of fruit.

This is one of the biggest criticisms of the guest worker program: that these workers are bound to work for a single employer, and are dependent on that employer for work, housing and transportation for the entire period of the contract. They can choose not to return next year. But for the term of their contract, they're stuck.

Philip Martin, an economist at the University of California, Davis, who has spent most of his professional life studying the situation of farmworkers, says the freedom to find a better deal can be really important.

"The biggest thing that has helped farmworkers has not been unions," he says. "It's been cellphones. Because they can call each other and say, 'Hey this guy's paying a little more per bin than over there,' and workers can move."

Martin expects the number of H-2A workers to keep growing. He thinks they already make up about 10 percent of the agricultural workforce and could reach 20 percent, even though employers are expected to hire U.S. workers first.

Many domestic farmworkers also came to the U.S. from other countries. It's estimated, in fact, that about half of them are in the U.S. illegally.

And it's actually hard to say who's better off: The H-2A worker or the undocumented domestic worker.

I met one of those U.S. workers, named Jaime. He spent 15 years working in citrus, but switched this year to other crops, in part because citrus greening disease has made the citrus harvest less attractive for workers.

Unlike an H-2A worker, he gets to decide how much he'll work, and where he'll work. Also, he points out, he has a real life here, and a family.

He pulls out his smartphone and plays me a recording of his daughter practicing for a presentation at school. This daughter was born here; she is a citizen.

We listen together as his daughter talks about her dreams. "My ultimate goal is to become a pediatrician," she says. "I like helping people out, whether it's dedicating my free hours to help out in the community, at my church, and helping to tutor younger children after school."

But another aspect of his life is fear — enough fear that he did not want me to use his full name. He and a couple of his other children are not here legally.

On the H-2A side of this divide, Esteban Gonzalez, from Veracruz, says he prefers being here in the country legally. "Just to have papers; it's better to be legal," he says. He pulls out his passport, and shows me the visa that's proof of his right to be here.

Gonzalez has a family, too. That family, back in Veracruz, is a big reason why he's here. "I have a son in university, and a daughter in high school," he says. If I was there, I wouldn't be able to pay her semester fees, his university fees. I'm able to help the kids get ahead, that's what the U.S. allows me to do."

I asked each of these workers, "Which of you has a better life?"

And each worker preferred his own life.

But each one also said that what he'd really like would be to live here legally, yet also have the freedom to choose his own job.