Accessibility links
'Forked' Rates Restaurants On How They Treat Their Workers : The Salt More restaurants are offering better wages, benefits and working conditions for employees. A new book rates dozens of restaurants and scolds the ones taking the "low road" to profitability.

'Forked' Rates Restaurants On How They Treat Their Workers

'Forked' Rates Restaurants On How They Treat Their Workers 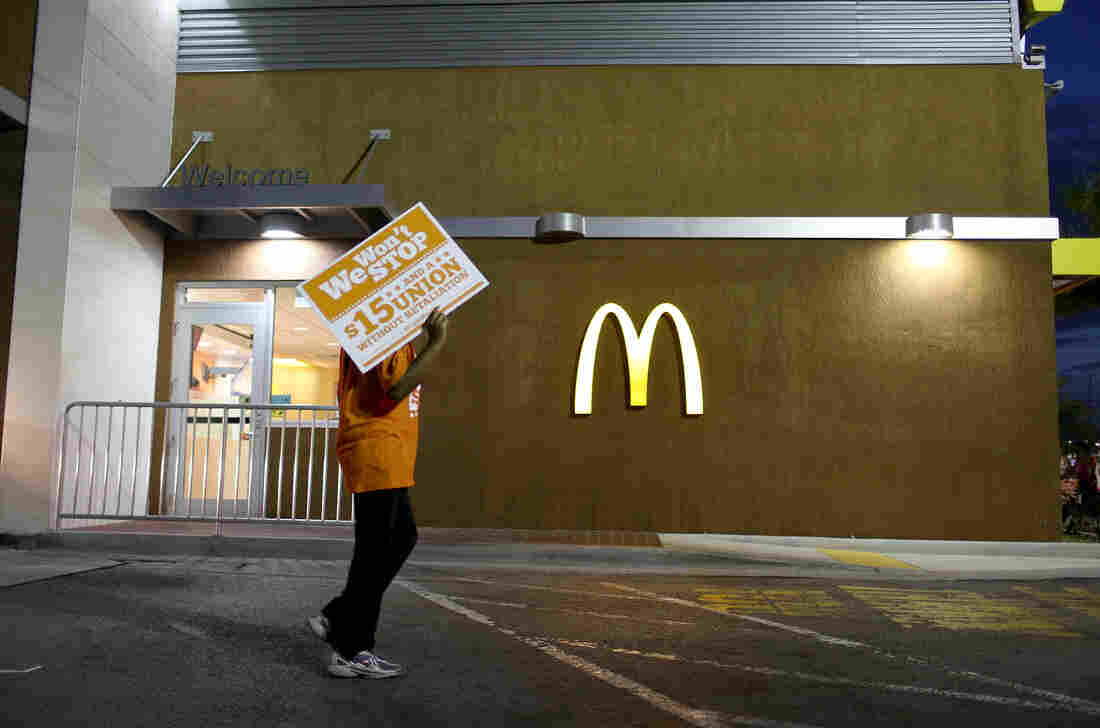 Protesters gather at a McDonald's to ask for higher wages on April 15, 2015 in Miami Gardens, Fla. Food labor advocate Saru Jayaraman writes in a new book that the company has taken the "low road" and lobbied extensively for lower wages and working conditions standards at the federal and state levels. Joe Raedle/Getty Images hide caption 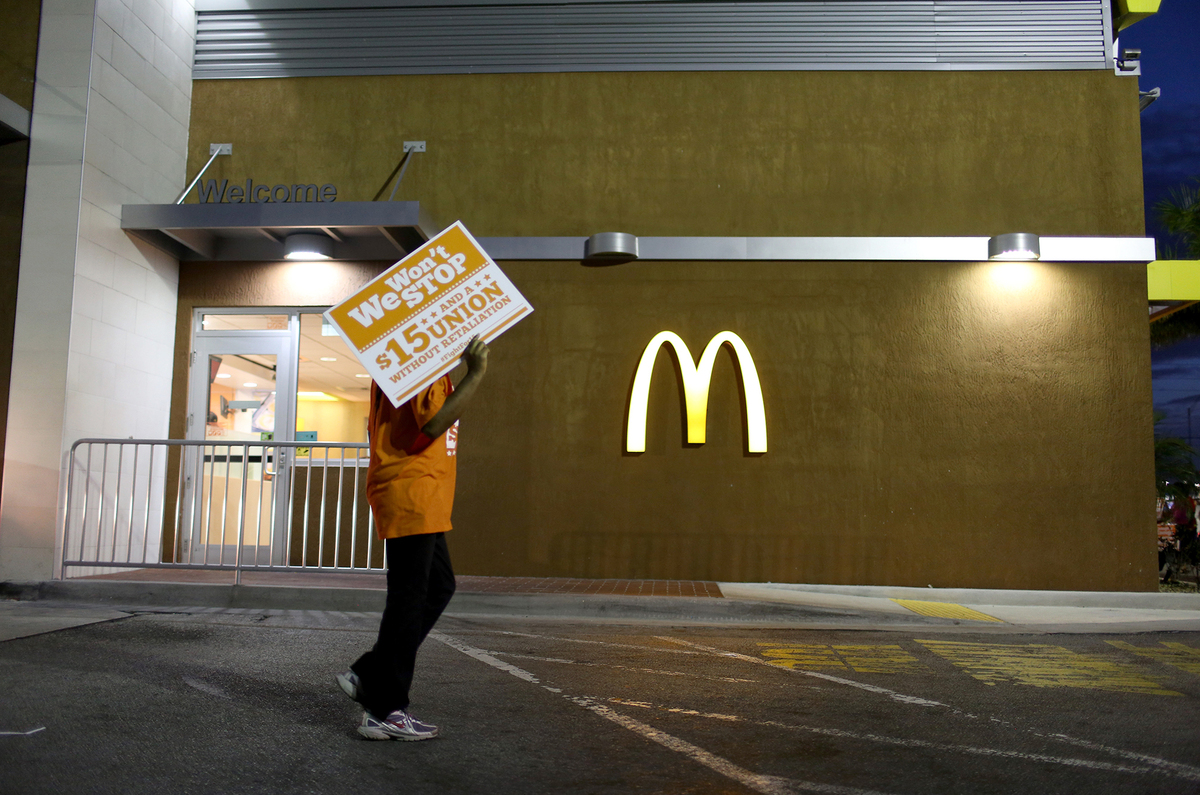 Protesters gather at a McDonald's to ask for higher wages on April 15, 2015 in Miami Gardens, Fla. Food labor advocate Saru Jayaraman writes in a new book that the company has taken the "low road" and lobbied extensively for lower wages and working conditions standards at the federal and state levels.

Saru Jayaraman may be restaurant obsessed, but don't call her a foodie. She's the founding director of the Restaurant Opportunities Centers United, a national organization that advocates for better wages and working conditions for restaurant workers. She's also published several studies in legal and policy journals as director of the Food Labor Research Center at the University of California-Berkeley. 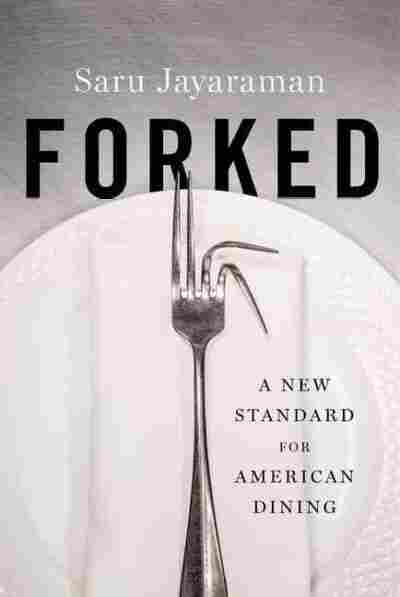 A New Standard for American Dining

The combination of grassroots and ivory tower makes Jayaraman arguably one of the country's leading experts on what it's like to live as a restaurant worker in America. She's someone celebrity restaurateur Danny Meyer turned to as he decided to banish tipping at some of his restaurants to try and close the pay gap between what his servers and dishwashers make.

On one end, workers get a wage as low as $2.13 an hour (the federal minimum for employees who earn tips), unpaid sick days, no opportunity for mobility and may experience sexual harassment from customers. That, writes Jayaraman, is the "low road."

But, as Jayaraman argues in her profiles of "high-road" employers, restaurants can be both profitable and good places to work, too.

We spoke to her about what she's learned in her deep dive into the industry. The conversation has been edited for length and clarity.

When most people think about restaurants, they think about food. Why focus on the workers?

So many reasons! We spend more on eating out than in the home. The industry is enormous: [it's] the second largest employer and growing faster than any other. One in 12 working Americans work in this industry, [and] 1 in 2 Americans have worked in [a restaurant] in their lifetime. But it has continued to be one of the absolute lowest paying employers in the U.S. For every year that the Department of Labor lists the 10 worst paid jobs, seven are, every year, restaurant jobs.

One of your critiques of the U.S. is that it's the only Western nation that has a tipped minimum wage. What's so bad about tipping?

It's not tipping per se that's the problem, it's the tipped minimum wage, which hasn't gone up in a quarter century. [ROC has] members whose mothers worked at the same wage they do: $2.13 an hour. It's a legacy of slavery; it comes from not wanting to pay black workers, former slaves, anything at all.

That means we as consumers are doubly subsidizing billion dollar corporations [like Darden, which owns Olive Garden]: We're paying worker wages entirely through our tips, and subsidizing their survival through taxpayer funded public assistance. The other problem is 70 percent of tipped workers are women, and [some] suffer from the absolute worst sexual harassment. When you rely on customer tips, you are then subject to tolerate however [a customer] might touch you or talk to you, because the customer is paying your bills.

What do you see as the biggest problems facing restaurant workers in America today?

No. 1 is poverty wages, both tipped and untipped. No. 2 is benefits, [especially] the lack of paid sick days. Two-thirds [of restaurant workers] report working while they are ill, with everything from H1N1 to typhoid fever. And then the third major problem we hear is discrimination and harassment on basis of race and gender.

There are livable wage jobs in this industry, about 20 percent of them. They are fine dining servers and bartenders, and the problem is that those jobs are held almost exclusively by white men. People of color, women and immigrants often can't get to those best jobs; [they] get stuck in lower level segments, like fast food, and positions like bussers, runners and dishwashers.

OK, but if a worker doesn't want that kind of job, can't they just find another one? Why is restaurant workers' job quality a problem for diners?

You can't say to workers, "go find another job," because someone's always going to fill those jobs. If you want to be treated well, served well, given quality food, then you have to care about how these workers are treated. All of our "high-road" employers are able to point to the fact that you get better service, better food, better environment, a better experience if workers are treated well and paid well. 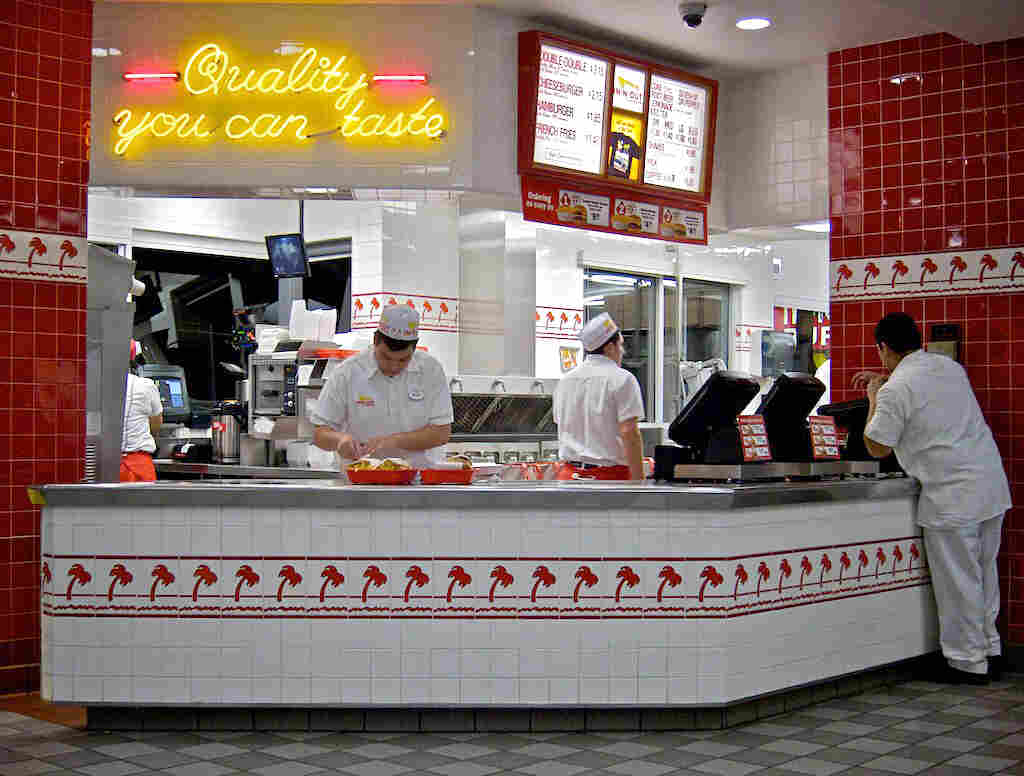 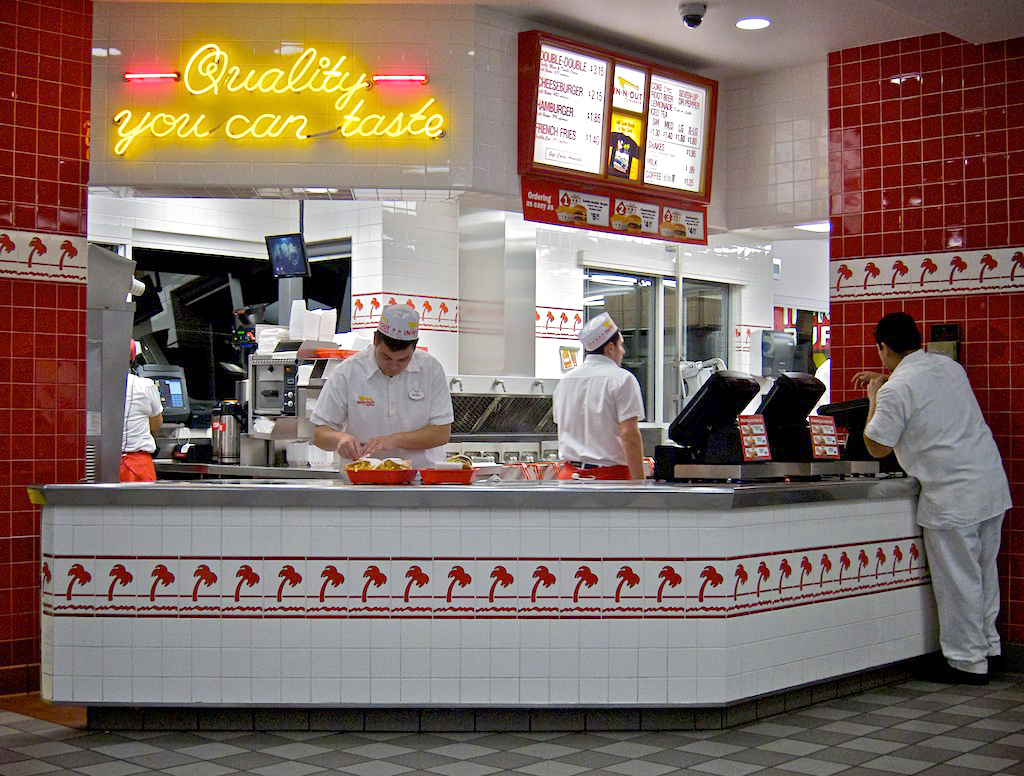 In her book, Forked, Saru Jayaraman praises In-N-Out Burger for its higher-than-average worker pay and ample health and other benefits.

If the working conditions are so bad, why hasn't there been more of a movement to improve them?

It all points back to the money, power and influence of a trade lobby called the National Restaurant Association. It's the 10th most powerful lobbying group in Congress, [and] the most powerful voice in every state legislature on work conditions. They have wielded enormous power over legislators, to the point where [I have] heard people talking about, "We can only raise the minimum wage if we leave out the tipped workers because the Restaurant Association won't let us raise the minimum wage unless we leave out those tipped workers."

Editor's note: We asked the National Restaurant Association to respond to Jayaraman. Spokesperson Christin Fernandez tells us that the association does actively lobby against increases to both the minimum and tipped minimum wages, including New York State Governor Cuomo's current efforts to raise the minimum wage to $15 per hour. But Fernandez questions Jayaraman's characterization of the group's power: "It's flattering that she thinks we are this all-powerful lobby, but it's only a fraction of what we do," she says.

Your book, Forked, divides its rankings by type of restaurant: burgers, diners, sandwich shops, coffee shops, fine dining. But if there's any indicator of best practices, it seems to be that smaller, independent restaurants are more likely to boost wages and working conditions than big chains. Have decent labor practices become artisanal?

Won't making restaurant jobs better mean restaurant prices will go up, and some restaurants will be driven out of business?

The places that have raised the minimum wage in this industry are not just surviving, but thriving. The seven states that have the highest wages and don't allow a lower wage for tipped workers, are actually faring better, on every measure, than the 43 states with lower wages for tipped workers. Those seven states have higher restaurant sales per capita, higher job growth in the restaurant industry, higher job growth among tipped workers. On the whole, workers are doing better, employers are doing better.

How can diners find out if restaurant workers at their favorite local restaurant are being treated well? If they're not, what can diners do to make things better?

We have a Diner's Guide app. It rates the most popular chains and 150 "high-road" companies on wages, benefits and mobility for workers. It also notes if they are part of an alternative restaurant association we started, called RAISE, of "high-road" employers. [But] the most important thing we'd like you do is communicate that you support "high-road" practices to the owner or manager.