Accessibility links
Two Grad Students Use Science To Bust The Dinner Hoax Of The Century : The Salt In 1951, members of the scientific Explorers Club thought they had dined on prehistoric meat dug out of the Alaskan tundra. The meal became legend. Now two Yale students have unraveled the deception. 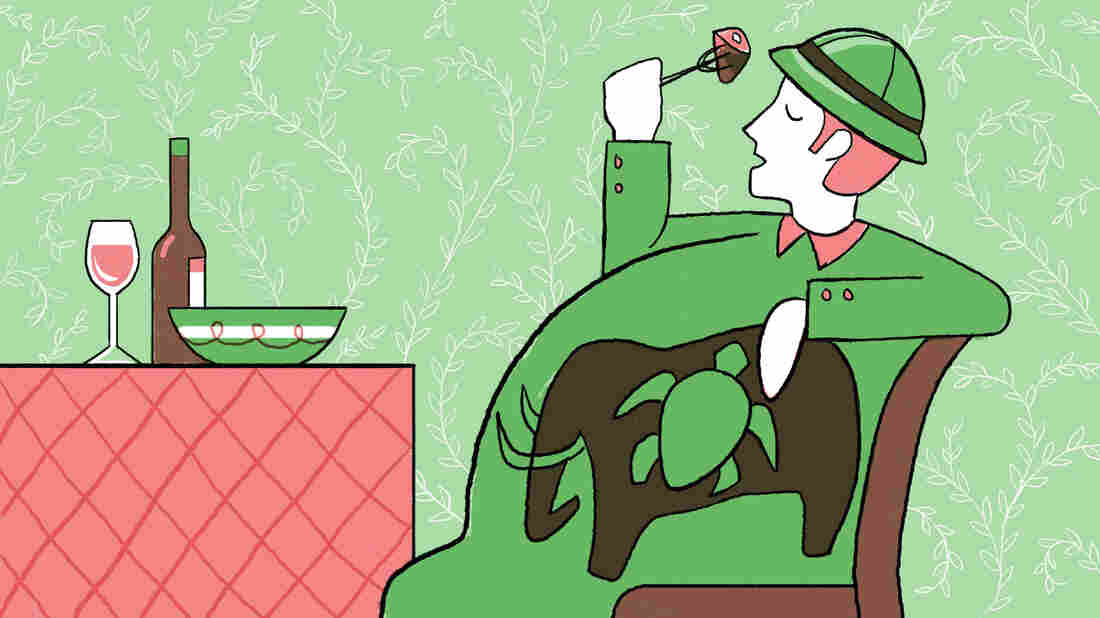 According to legend, the Explorers Club — a society of scientific adventurers — served its members a prehistoric dish at its annual dinner in 1951. By some accounts, the mystery meat was woolly mammoth; by others, extinct giant sloth. Now DNA analysis has provided a definitive answer — and unraveled a decades-long deception. Katherine Du/NPR hide caption 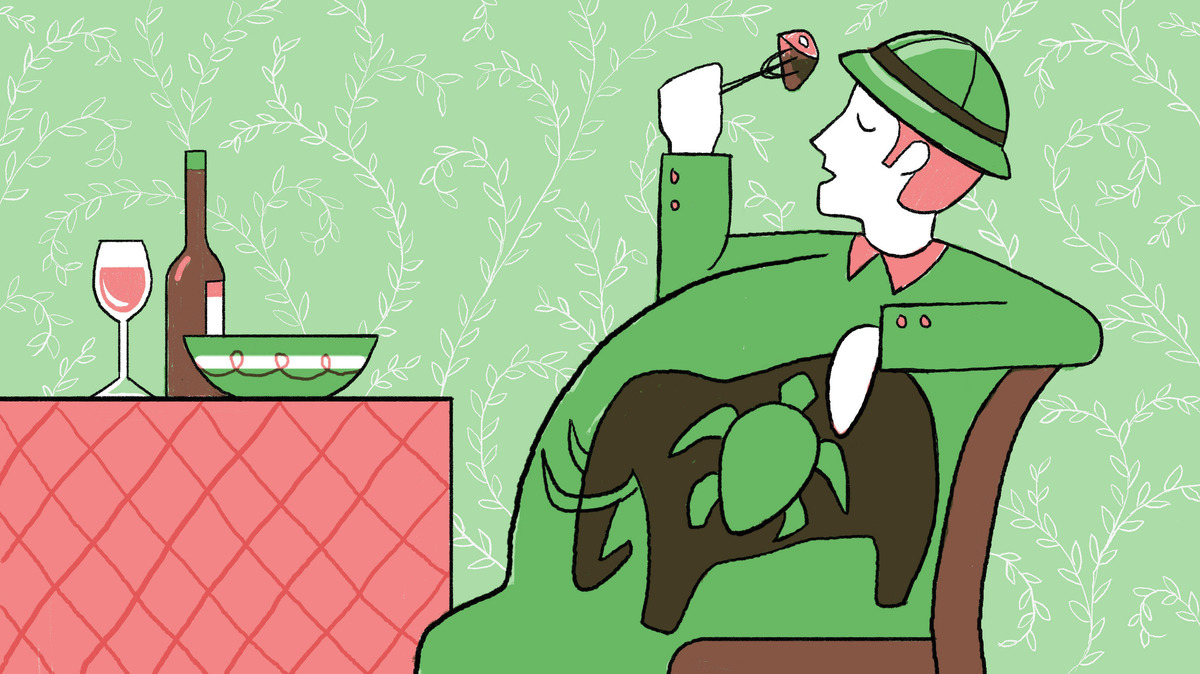 According to legend, the Explorers Club — a society of scientific adventurers — served its members a prehistoric dish at its annual dinner in 1951. By some accounts, the mystery meat was woolly mammoth; by others, extinct giant sloth. Now DNA analysis has provided a definitive answer — and unraveled a decades-long deception.

There aren't a lot of people who have dined on meat from the Pleistocene, prehistoric humans notwithstanding. That's why accounts of the 1951 Annual Dinner of the Explorers Club, a society of scientific adventurers, all agree that the organizer of the night, Wendell Phillips Dodge, threw the dinner party of the century. Legend has it that Dodge served the meat of a woolly mammoth.

Or was it an extinct giant ground sloth? Reports were inconsistent as to which prehistoric animal Dodge procured for the reception. "Some people said they ate sloth, and some people said they ate mammoth," says Jessica Glass, a doctoral candidate in evolutionary biology at Yale. In a letter to Dodge, John Tee-Van, then-president of the Explorers Club, wrote, "I am still holding my query as to what the material was that you had at the dinner."

Yeah. So just what in the last epoch did the 1951 Explorers Club eat that night? 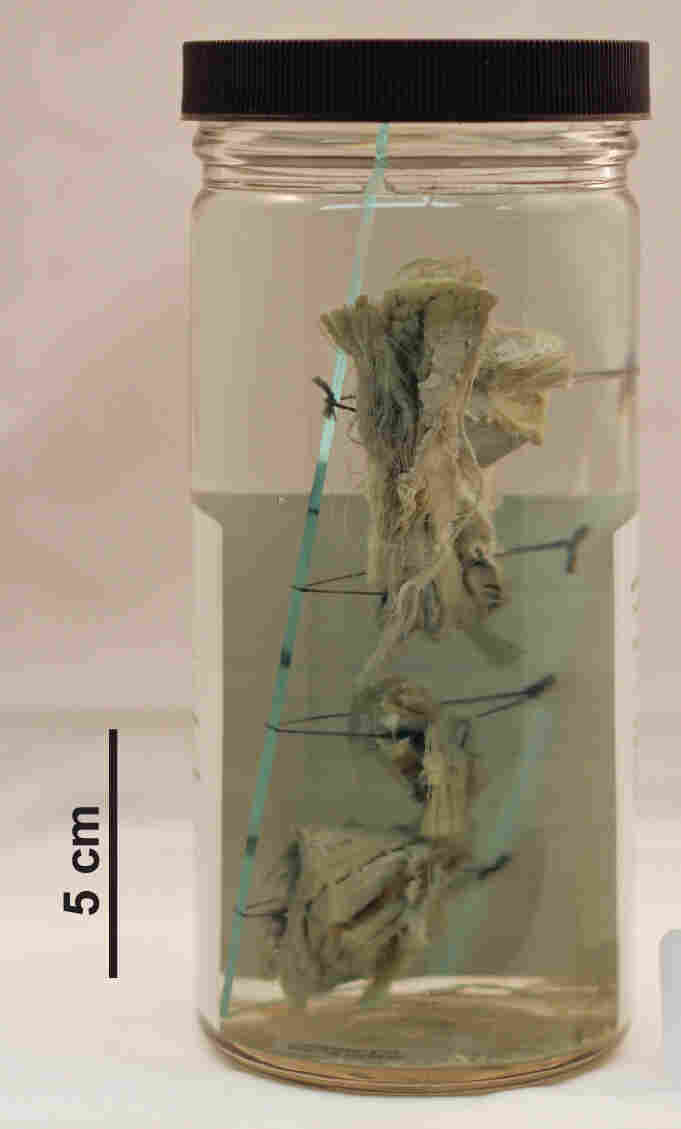 Above, the surviving morsel of allegedly prehistoric meat served at the Explorers Club Annual Dinner in 1951. The meat was preserved in a jar that ended up in the Yale Peabody Museum. Courtesy of Matt Davis, Peabody Museum of Natural History, Yale University, New Haven, Conn. hide caption 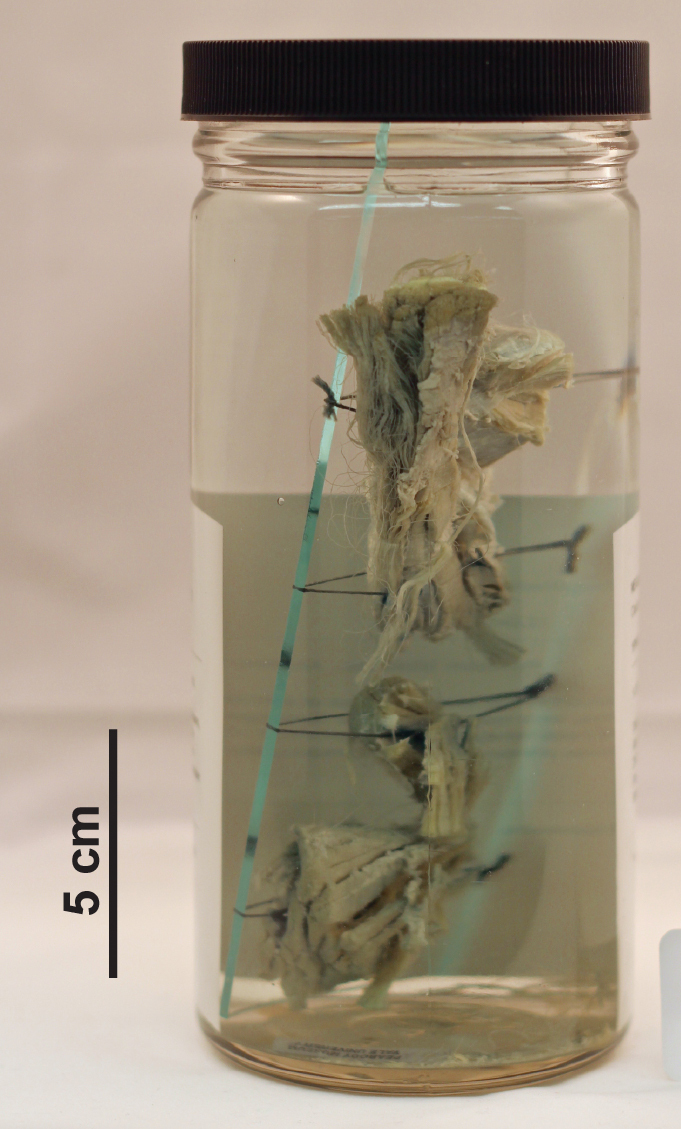 Above, the surviving morsel of allegedly prehistoric meat served at the Explorers Club Annual Dinner in 1951. The meat was preserved in a jar that ended up in the Yale Peabody Museum.

As luck would have it, a single morsel of the allegedly prehistoric dish survived in a jar bearing the label "Megatherium (Extinct Sloth)," written in Dodge's own hand. He had preserved the sliver of the meat for a naturalist named Paul Howes, the curator of a natural history museum, who was unable to attend the dinner. In doing so, Dodge inadvertently opened the door for two graduate students armed with DNA sequencing technology to unravel his hoax.

The jar eventually ended up in the Yale Peabody Museum, where it sat for decades. Then, a few years ago, Yale mammologist Eric Sargis came across the label and realized something didn't add up. This type of giant ground sloth, Megatherium, has only ever been found in South America.

And yet, Dodge had claimed that the specimen came from Alaska. If the meat really came from a Megatherium corpse on Akutan Island, this little chunk of 1950s stew could help rewrite the history of Pleistocene-era giant sloths. "It could add a lot of valuable information to paleontology," Glass says. "And if it were mammoth, it's actually kind of rare to have that from the Aleutian Islands or Akutan Island."

So, in 2014, Sargis persuaded two of his students to start digging into the specimen. Matt Davis, a doctoral candidate in geology, knew that according to Explorers Club lore, the jar should contain meat from a woolly mammoth.

"People point to a tusk in [the club headquarters in New York] and say, 'That came from the mammoth they ate at the dinner,' " Davis tells us. So he began sifting through club and university archives for clues that might reveal whether the meat was sloth or woolly mammoth.

Davis found an editorial by Dodge in a 1951 issue of The Explorers Journal, a club publication, where Dodge attempts to address some of the confusion. "Early on, he says 'IT IS SLOTH' in all capital letters. He types in Megatherium, and I turned to the archivist, and I said, 'Wow. I guess our work is done. It's a sloth.' But then I kept reading and getting more and more worried," Davis says.

In the editorial, Dodge describes the giant sloth specimen. He references "the prehistoric sloths that fed on Pteropods, little swimming snails known as 'Sea Butterflies,' " and writes that this particular animal "must be MEGATHERIUM, large wild beast." At this point, Davis says Dodge's writings became nonsensical. For starters, it would have been almost impossible for giant sloths to eat Pteropods. "As a paleontologist, I just knew something was wrong," Davis says.

Then, toward the end of the editorial, Dodge writes a veiled confession, referring to himself in the third person, "Could it be that the Annual Dinner Chairman discovered a potion by means of which he could change [green sea turtle] into Giant Sloth?" 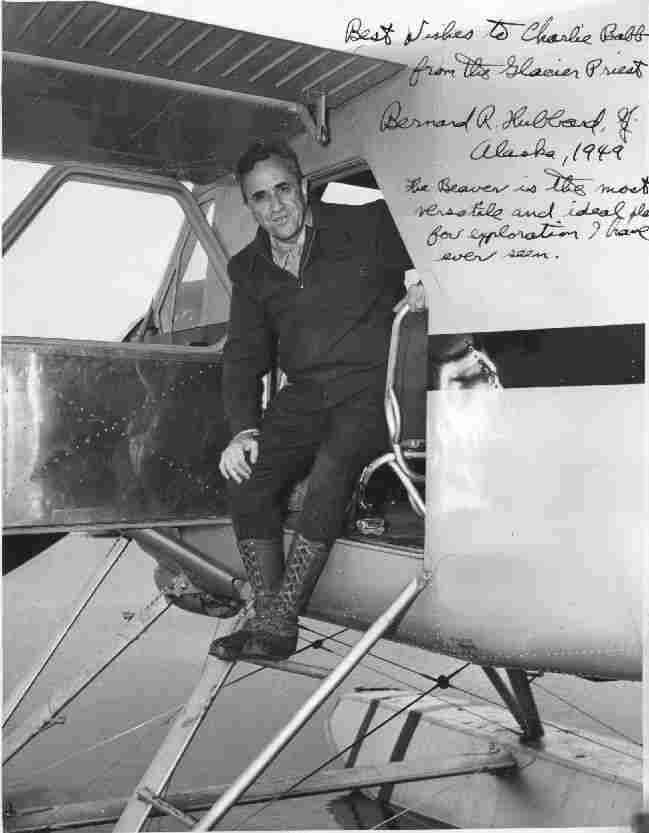 The Rev. Bernard Hubbard, a geologist known as "the glacial priest," pictured in 1949. According to the legend of the 1951 Explorers Club Annual Dinner, Hubbard and another explorer had recovered a giant extinct sloth that ended up on the menu. But that story turned out to be a hoax. San Diego Air and Space Museum Archive/Flickr hide caption 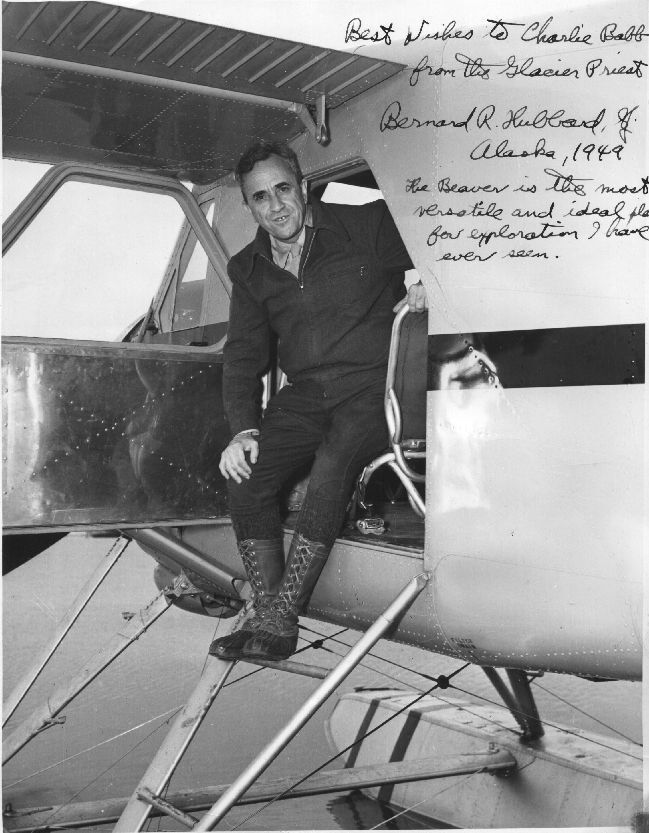 The Rev. Bernard Hubbard, a geologist known as "the glacial priest," pictured in 1949. According to the legend of the 1951 Explorers Club Annual Dinner, Hubbard and another explorer had recovered a giant extinct sloth that ended up on the menu. But that story turned out to be a hoax.

While Davis dug through the archives, Glass began the painstaking work of drawing usable DNA from the specimen. "We were really skeptical from the start that we'd be able to extract anything at all. We assumed it was something ancient," she says. But they were in luck. "We got a sequence of the mitochondrial genome," she says.

She ran the sequence through an online database to look for matches. When the results came back, she and Davis opened them together. "It was like a 99 percent match for a green sea turtle," Glass says. She and Davis published their findings in PLOS ONE on Wednesday.

And with that, a decades-long deception unraveled. Dodge was not a paleontologist. He was a theater impresario and notorious showman who loved fostering shock and awe. And in promoting the dinner, he had claimed that the sloth had been excavated by two famed explorers: the Rev. Bernard Hubbard, a geologist known as "the glacial priest," and Capt. George Kosco of the United States Navy. Neither attended the dinner, so Dodge was free to fashion the "sloth's" origin story as he saw fit. He wanted to impress people, so he decided to pass off carved turtle meat as prehistoric game.

"As far as we know, Dodge was working alone on this," Davis says. And he couldn't find any records indicating that either Kosco or Hubbard had ever found a giant sloth or woolly mammoth on Akutan Island.

By some accounts, diners who partook of the turtle turned sloth meat at the Explorers Club said it tasted like veal -- which is how people have often characterized the taste of turtle meat. But other reports described the meat as tough, stringy and tasteless. (If you're wondering, real mammoth tastes just dreadful, according to Russian scientist Alexei Tikhonov. Once, after a few shots of vodka, Tikhonov took a bite of a woolly beast that had been dug out of the Siberian tundra — as Richard Stone recounted in his 2002 book Mammoth.)

Davis says he thinks Dodge would have been delighted to hear the dinner became this legend that everyone has long accepted at face value. "In a way, this was his greatest production," Davis says. "Nobody remembers Dodge the explorer or Dodge the impresario. But people remember this."