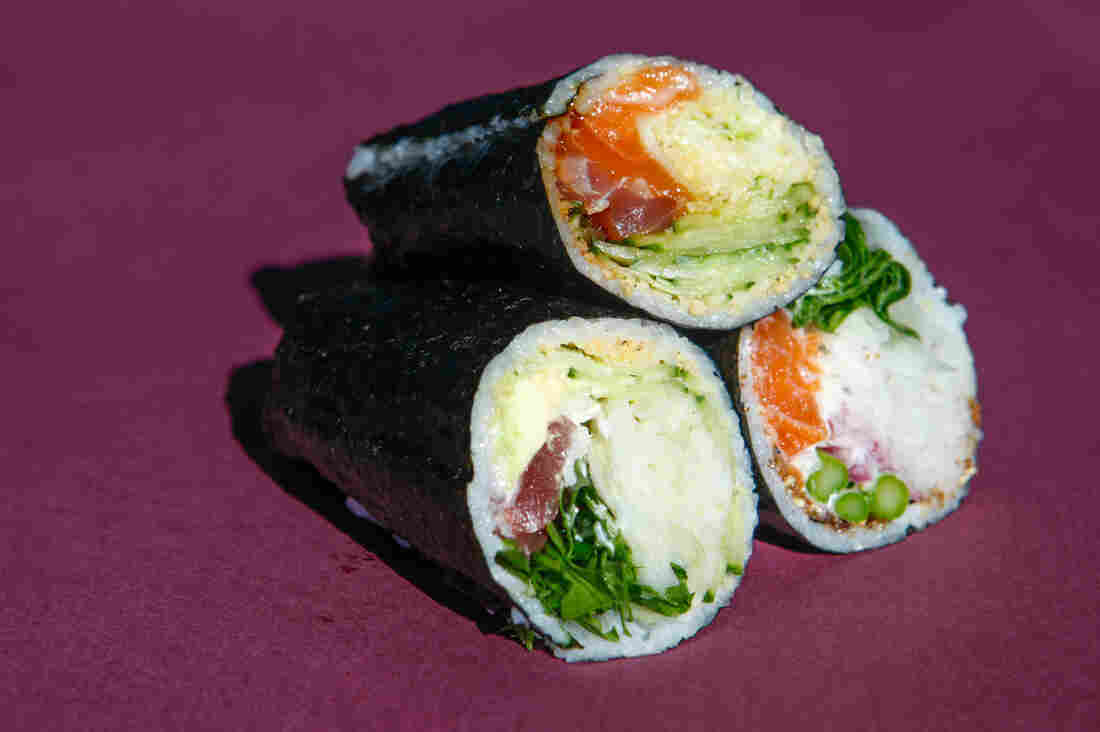 Sushi burritos from Washington, D.C., restaurant Buredo. These are delicious, but there's no way they'll earn certification as authentic Japanese cuisine under a new program from the government of Japan. Morgan McCloy/NPR hide caption 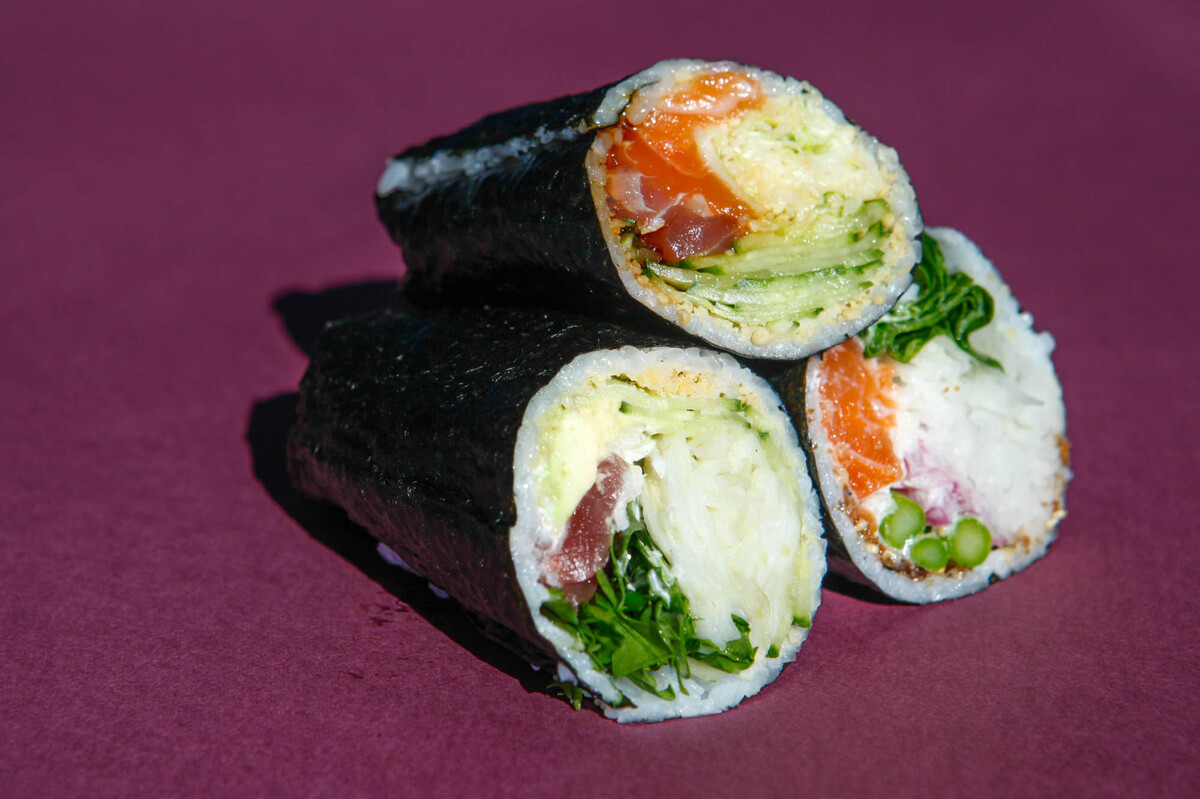 Sushi burritos from Washington, D.C., restaurant Buredo. These are delicious, but there's no way they'll earn certification as authentic Japanese cuisine under a new program from the government of Japan.

Out for dinner with a group of friends, Christina Dierkes, a science writer with Ohio Sea Grant in Columbus, was feeling adventurous. It took some steely courage to order the Caribbean Roll at Mr. Sushi's. Not so much for the tuna and avocado on the inside — that's a combination that's appealing to many of us. But the tuna sushi in this spectacularly Americanized roll is topped with a deep-fried banana, honey, mayonnaise and a generous dash of coconut crumbs. Yum?

"It wasn't awful," Dierkes says, adding that she pawned most of it off on her friends. "But why would anyone order that twice?"

Mr. Sushi isn't alone in its creative take on Japanese cuisine. Across America, sushi is getting reimagined, often in outlandish ways. We've got Big Mac sushi, sushi croissants, Nordic sushi, Cajun rolls, beef, bacon and melty cheese sushi, and perhaps the granddaddy of them all — the sushi burrito — a delicious (or so my editor says) mashup of hand-held burritos and rice-wrapped raw fish.

But none of them are authentically Japanese — not even the beloved California roll (which, though invented by a Japanese chef in the U.S., is considered thoroughly American). It's a widespread misperception that Japanese authorities would like to correct.

A new program from the country's Ministry of Agriculture, Forestry and Fisheries will certify that Japanese restaurants operating outside the country uphold the values of traditional Japanese cuisine, known as washoku.

The program, which will launch soon, doesn't have an official English name just yet. At the Japanese Embassy in Washington, D.C., it's being referred to as "Japanese Cuisine Skills Certification Guidelines."

The voluntary certification system aims to help eliminate mistakes commonly made by overseas chefs — from the mishandling of raw fish, to low hygiene standards, to the ceremonial way in which food should be presented to customers.

"For example, one common mistake is touching fish too many times, which causes a rise in the fish's temperature. Another is using cooking tools, such as kitchen knives and cutting boards, in the wrong way. The Japanese soup stock (dashi) is also often boiled too much, which causes it to lose flavor," said a Ministry official in an email to NPR.

Japan takes its food seriously. The country is home to a bevy of Michelin-starred restaurants. And in 2013, washoku became one of only a handful of cuisines to be recognized by UNESCO as an Intangible Cultural Heritage. (Others include French, Mediterranean and Mexican cuisines and Keşkek, a ceremonial dish from Turkey.) 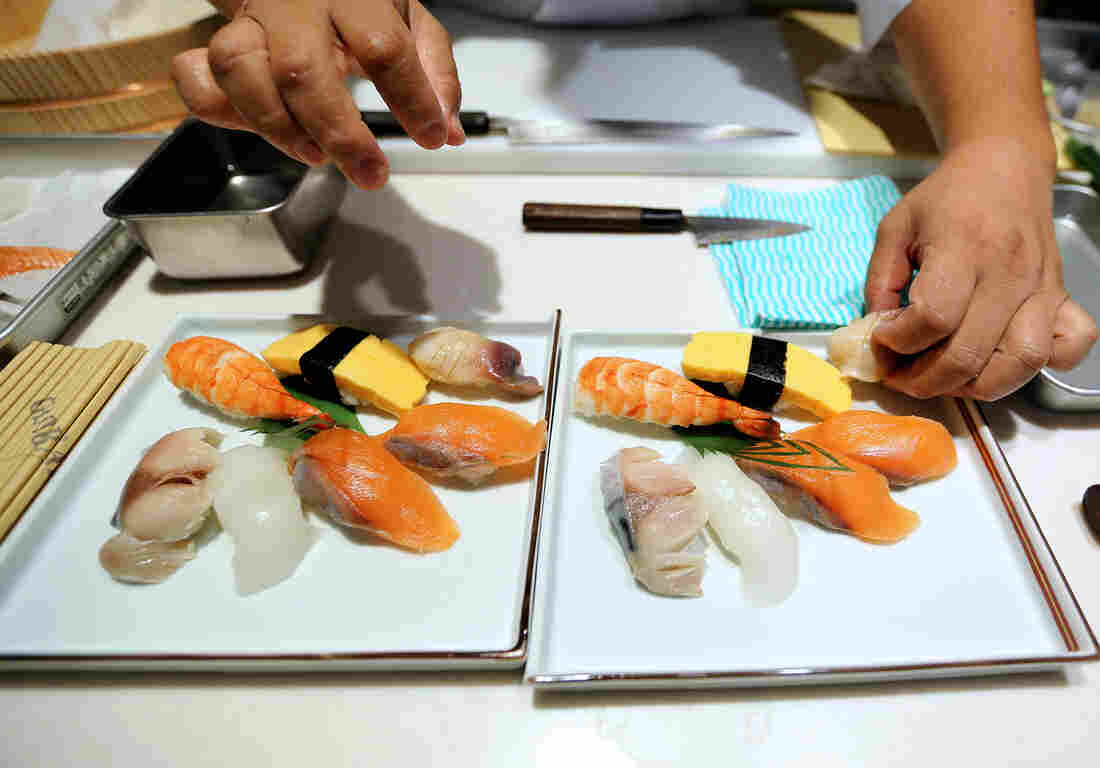 A sushi chef prepares a dish during the Global Sushi Challenge competition in Tokyo in September. Japan's new program will certify Japanese restaurants outside of the country that meet the standards of traditional Japanese food, known as washoku. Yuriko Nakao/Bloomberg via Getty Images hide caption 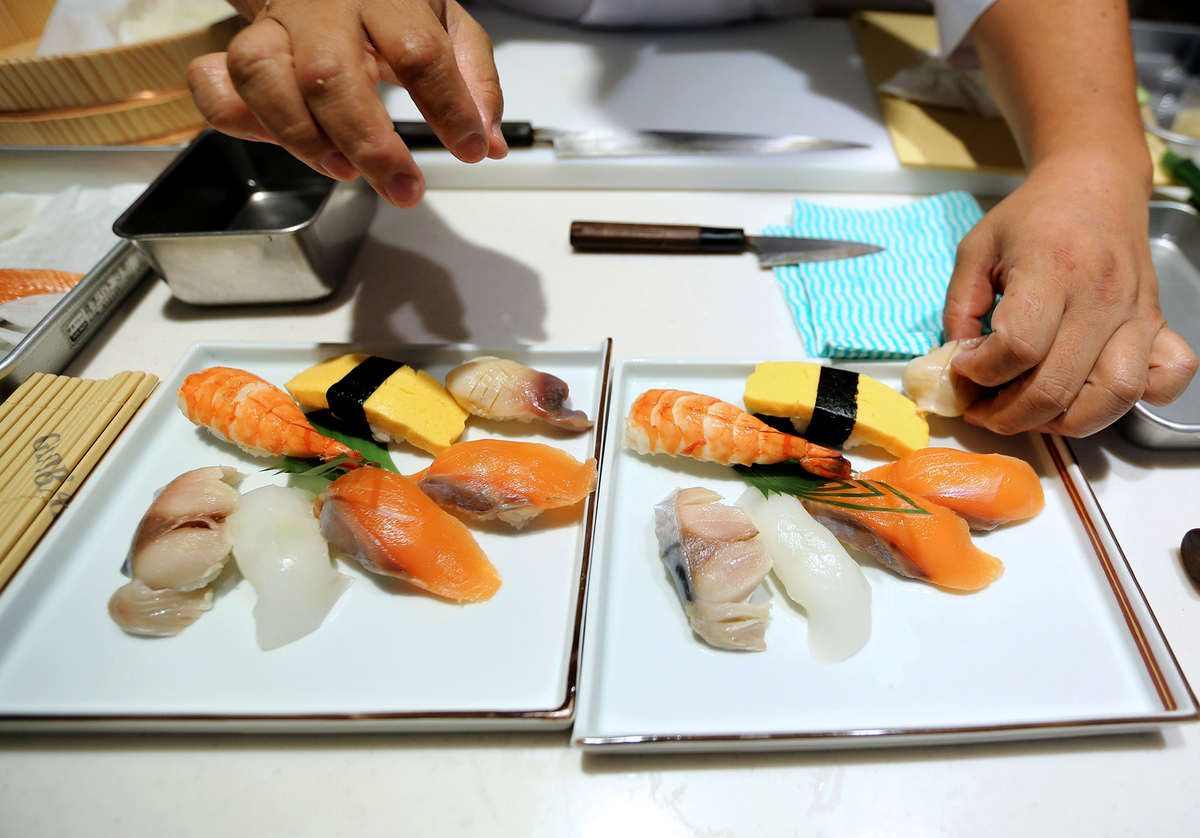 A sushi chef prepares a dish during the Global Sushi Challenge competition in Tokyo in September. Japan's new program will certify Japanese restaurants outside of the country that meet the standards of traditional Japanese food, known as washoku.

"Washoku is expanding all over the world, but what we see outside of Japan is not always traditional," says Japanese food expert Yukari Sakamoto, author of Food Sake Tokyo. "For example, sushi rolls with mayo and sweet, icky sauces. And there's the whole service aspect to washoku, the way the food is presented carefully and not slammed on the table."

The seasonality of fish is also taken into account in Japan, she adds. Americans aren't used to thinking of seafood seasons. Much of the sushi we eat has been previously frozen and is available year-round.

The new program isn't trying to squash creativity in the kitchen, but rather, it aims to highlight often-overlooked traditional nuances and practices.

The certification system will also help diners identify Japanese restaurants where chefs have undergone further culinary training in Japan — an option that, until fairly recently, wasn't available to most foreign chefs.

Until 2013, foreign chefs were legally barred from working in restaurants specializing in traditional Japanese food, so many of the skills and techniques closely associated with washoku were difficult for chefs to secure firsthand. For example, an Italian chef was allowed to work in an Italian restaurant in Japan, but not in a sushi restaurant. After winning UNESCO designation, however, Japan changed its regulations for foreign chefs.

The new certification is one that chef Shota Nakajima, of the Seattle restaurant Naka, says he'll seek out as soon as it's available. Nakajima was born in Japan but moved to the U.S. as a newborn. A dual passport allowed him to move back to Japan for five years for culinary training. Naka is a kaiseki restaurant, meaning the chef serves a set menu based on seasonal ingredients. Nakajima says the new certification system won't change the way he already prepares dishes, but it's a mark of quality that can help customers distinguish an authentic Japanese restaurant like his from a less-authentic one.

"Don't get me wrong — the sushi burrito is a cool concept," says Nakajima. "I wouldn't tell anyone not to eat it. But I wouldn't say it's Japanese food. That's drawing a line there."