Accessibility links
'Luncheon In Fur': The Surrealist Teacup That Stirred The Art World : The Salt In 1936, the surrealist Meret Oppenheim wrapped a teacup, saucer and spoon in fur. In the age of Freud, a gastro-sexual interpretation was inescapable. Even today, the work triggers intense reactions.

'Luncheon In Fur': The Surrealist Teacup That Stirred The Art World

'Luncheon In Fur': The Surrealist Teacup That Stirred The Art World 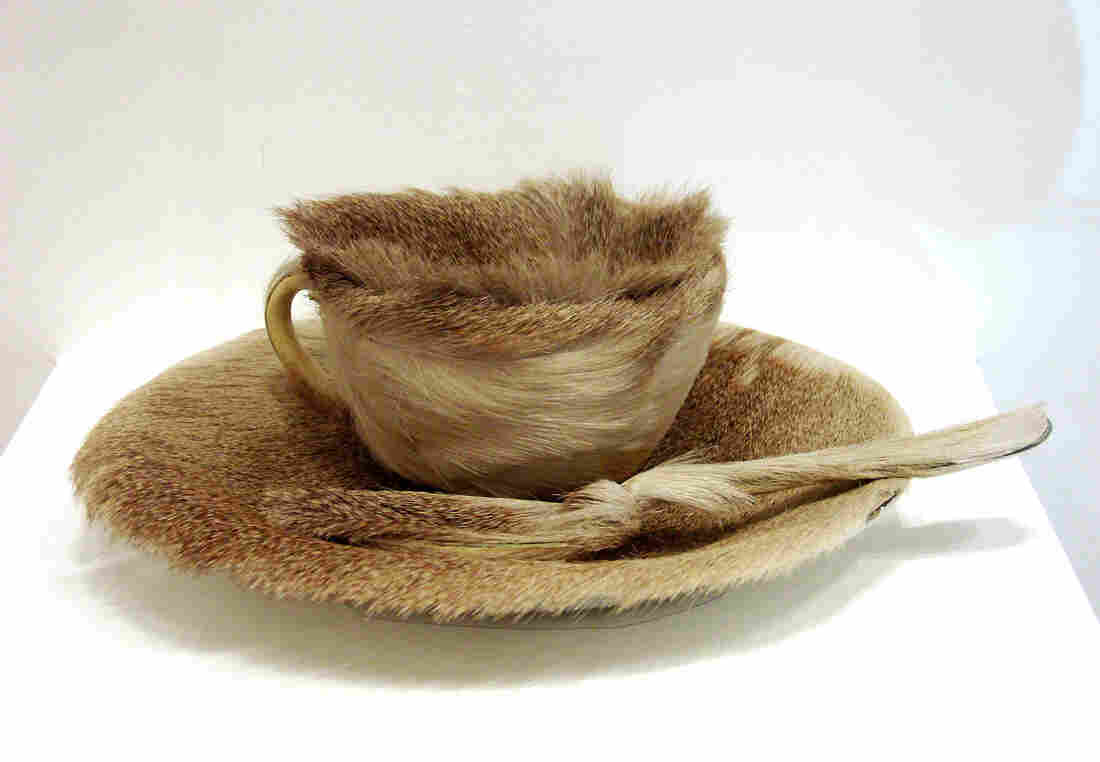 Object (or Luncheon in Fur), by Meret Oppenheim. In 1936, Oppenheim wrapped a teacup, saucer and spoon in fur. In the age of Freud, a gastro-sexual interpretation was inescapable. Even today, the work triggers intense reactions. Flavia Brandi/Flickr hide caption 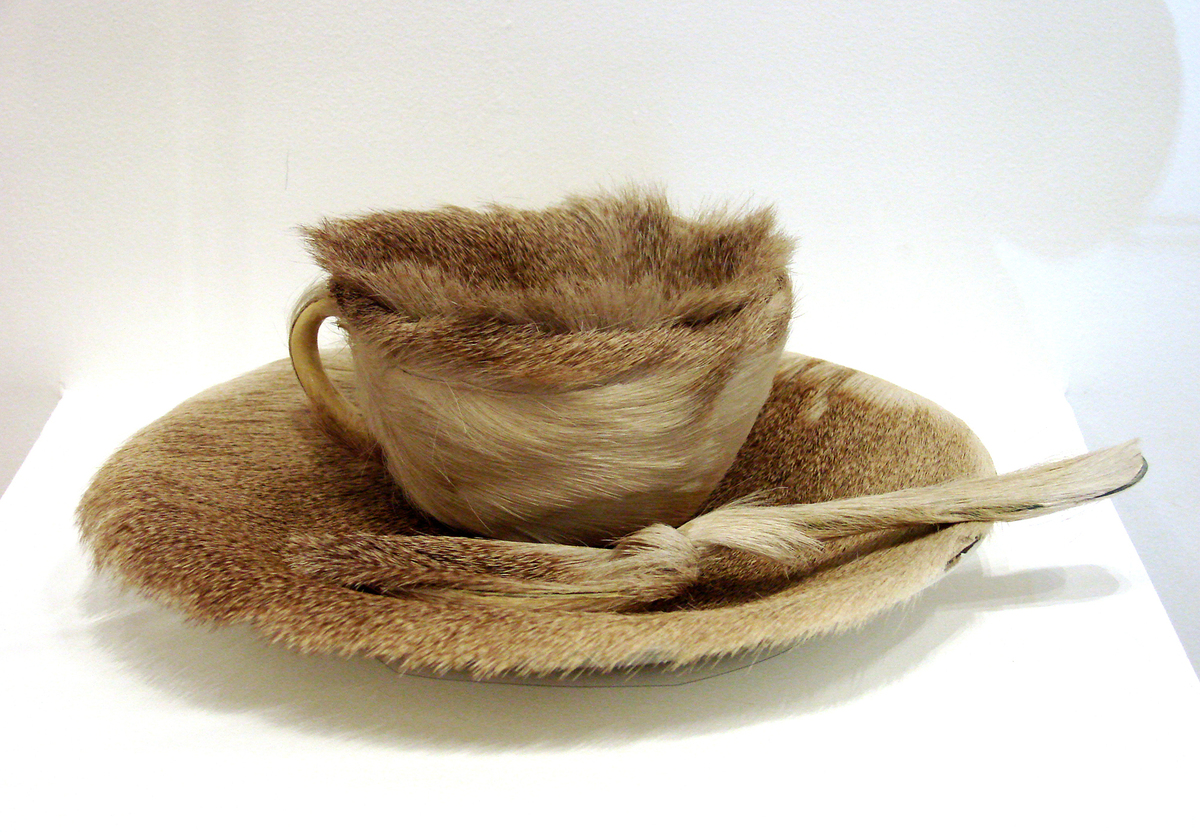 Object (or Luncheon in Fur), by Meret Oppenheim. In 1936, Oppenheim wrapped a teacup, saucer and spoon in fur. In the age of Freud, a gastro-sexual interpretation was inescapable. Even today, the work triggers intense reactions.

As the world celebrates one hundred years of dadaism, it is worth looking at how this "anti-art" art movement that started in a café in Zurich during World War I resulted in an iconic artwork involving that most humble object of tableware: the teacup.

In 1936, a 23-year-old Swiss artist named Meret Oppenheim bought a teacup, saucer and spoon from a department store in Paris and wrapped them in the cream-and-tan pelt of a Chinese gazelle. Her hirsute little offering became a defining artifact of surrealism — the art movement that sprang from dadaism's flamboyant entrails.

Part of the sculpture's appeal lay in the conversation that led to its creation.

One day in 1936, Oppenheim met her friends Pablo Picasso and his new lover, Dora Maar, at the Café de Flore, the modish Paris coffeehouse that was a regular haunt of artists. Beautiful, witty and fiercely independent, Oppenheim had been living in Paris for the last four years. She had scarcely managed to sell her art, but made a modest income by designing jewelry and accessories for the trailblazing fashion designer Elsa Schiaparelli, known for her shoe-shaped hats and telephone-shaped purses. As part of the surrealist set, Oppenheim had posed nude for Man Ray's camera and had recently ended a passionate yearlong love affair with the German painter Max Ernst, suddenly calling it off over lunch at a café.

Cafes would play an important role in her life. The story goes that at the Café de Flore, Picasso commented on Oppenheim's bracelet – a broad round brass cuff wrapped in ocelot fur that she had designed the previous year for Schiaparelli. Picasso remarked that one could cover anything with fur. "Even this plate and this cup here," Oppenheim replied. Then, when she found that her tea was cooling, she jokingly asked the waiter for "un peu plus de fourrure" — or "a little more fur" — to swaddle her cup.

Shortly afterward, Oppenheim went to the department store in what would become the most famous shopping trip of her career. In her studio, she artfully wrapped the items in such a way that the tan formed a dark border around the teacup's outer rim to match the saucer, while the body of the cup itself was offset in creamy white.

André Breton, the founder of surrealism, was enchanted. Here was an artwork that chimed with his declaration that "beauty will be convulsive or will not be at all." He called it Le Déjeuner en fourrure (Luncheon in Fur, though in English it is also known as Breakfast in Fur) and exhibited it that year at the first surrealist exhibition dedicated to objects.

As the talking point of the show, the sculpture became the receptacle of all kinds of theories, fears and longings. This being the age of Freud, a gastro-sexual interpretation was inescapable: the spoon was phallic, the cup vaginal, the hair pubic. For some, the tongue-shaped spoon brought to mind unpleasant sensations of a furry tongue. Others experienced unease at seeing a graceful item of the tea table transformed into something decadent and animalistic; some gagged at the thought of getting a hair or damp tea leaves in their mouth; still others wanted to stroke it.

Oppenheim's friend and mentor Marcel Duchamp had achieved something similar in 1919, when he took a postcard picture of the Mona Lisa and crayoned a black mustache and beard on her smooth face. But while his hairy additions had a comical effect, Oppenheim's were creepier, more visceral.

Among those impressed was Alfred J. Barr Jr., the young director of New York's newly established Museum of Modern Art. When Oppenheim expressed a willingness to sell the work for a thousand French francs, he offered roughly half that amount, $50, and she agreed. Since this was the first work by a woman the museum acquired, Oppenheim is playfully called the First Lady of MoMA.

For Oppenheim, the unexpected success had mixed results. The fur cup became "her prison," according to her niece, Lisa Wenger. The next year, having run out of funds – $50 didn't last very long – and with the Nazis on the rise, Oppenheim went back to Switzerland. "She lives in Basel, bloody hates it," Wenger said at a talk she gave at the 2013 Art Basel fair. "It was small compared to Paris, and conventional; people think she's weird because she wears one green and one red stocking."

It was the start of a 17-year-long depression, according to Wenger. Oppenheim was in any case vulnerable to bouts of anxiety and melancholy, and in the year before she created her fur cup, she had been sent by her doctor father to consult the great Carl Jung. His assessment, as he wrote to her father, was that Oppenheim reflected the "youthful disorientation of our era" and did not appear to have "any neurotic complication."

As part of MoMA's permanent collection, Oppenheim's furry – if balding — ensemble continues to trigger reactions that are as intense as those elicited all those years ago in Paris.

A picture of Meret Oppenheim's September 1935 design notes for the prototype of her brass and ocelot fur bracelet. Pablo Picasso's comment about the bracelet may have inspired Oppenheim to wrap a teacup, saucer and spoon in fur as well. Courtesy of Hans-Jörg Walter/Gems and Ladders hide caption

A picture of Meret Oppenheim's September 1935 design notes for the prototype of her brass and ocelot fur bracelet. Pablo Picasso's comment about the bracelet may have inspired Oppenheim to wrap a teacup, saucer and spoon in fur as well.

Courtesy of Hans-Jörg Walter/Gems and Ladders

As the art critic Will Gompertz writes in his 2012 book What Are You Looking At?, "Two incompatible materials have been brought together to create one troubling vessel. Fur is pleasing to touch, but horrible when you put it in your mouth. You want to drink from the cup and eat from the spoon — that is their purpose — but the sensation of the fur is too repulsive. It's a maddening cycle."

At the MoMa, the sculpture is known by the unadorned title that Oppenheim gave it: Object — not Luncheon in Fur, which was the sensual name Breton chose. His idea was to reference not only Edouard Manet's famous painting Le Déjeuner sur l'herbe ("The Luncheon on the Grass"), but also, more cannily, Venus in Furs, the 1870 sadomasochistic novella by the Austrian writer Leopold von Sacher-Masoch (whose surname is the root of the word masochistic).

Oppenheim, no prude by any standard, maintained that she had neither whips nor chains in mind when she was dressing up her tea things. All she had wanted was to take something familiar and make it strange.

Fortunately, she didn't design Object today. It might have been called Fifty Shades of Earl Grey.