Accessibility links
The Shocking Truth About America's Ethanol Law: It Doesn't Matter (For Now) : The Salt Ted Cruz doesn't like the law that requires the use of ethanol in gasoline. So what would happen if it was abolished? The surprising answer: not much, probably.

The Shocking Truth About America's Ethanol Law: It Doesn't Matter (For Now)

The Shocking Truth About America's Ethanol Law: It Doesn't Matter (For Now) 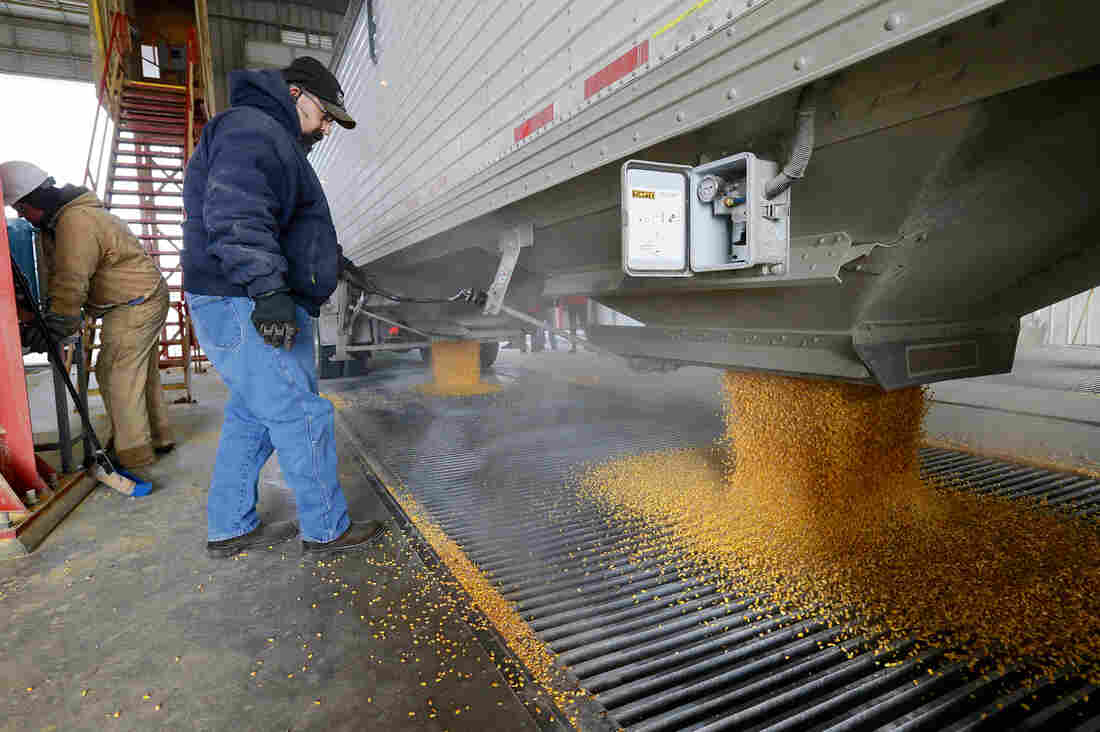 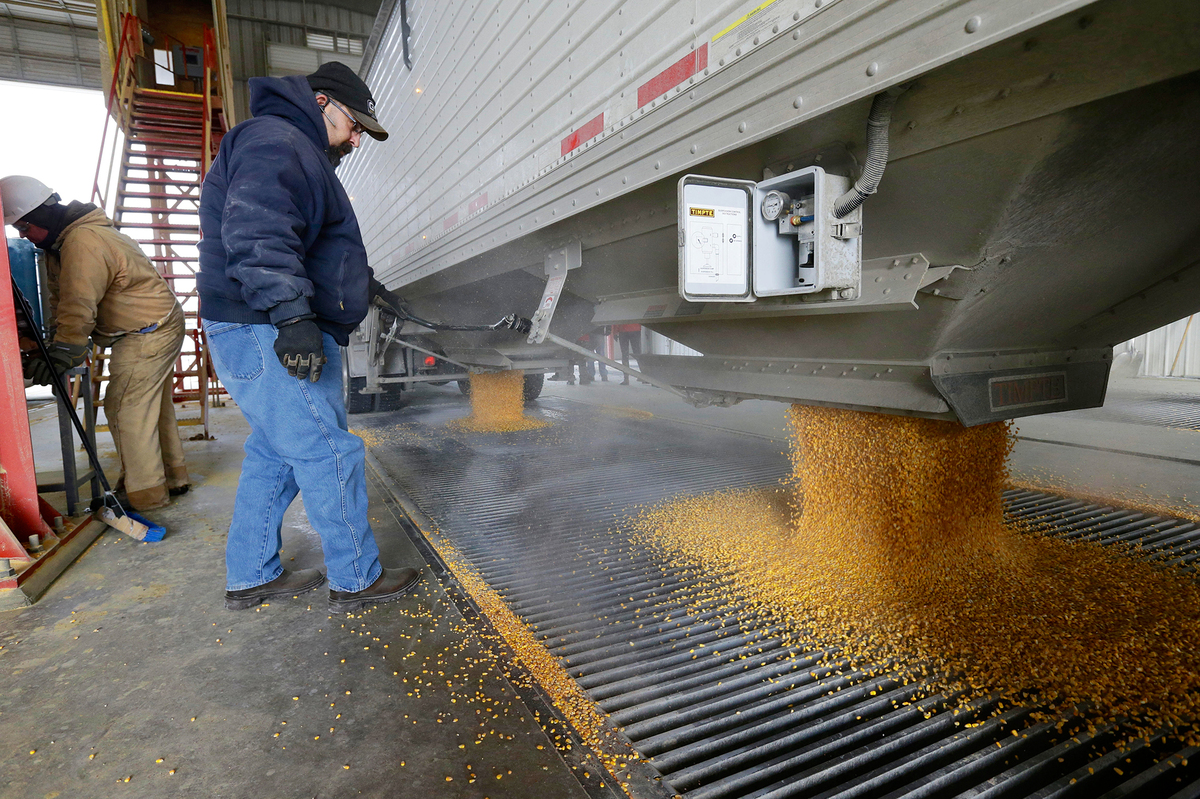 Corn is delivered to the Green Plains ethanol plant in Shenandoah, Iowa.

It took Sen. Ted Cruz to finally persuade me to answer a riddle that's bothered me for years. Suppose somebody yanked away the law that currently props up the nation's ethanol industry, as Cruz has proposed. What would actually happen?

Before we get to the answer, let me mention why it's important, and why I'm writing about it here in The Salt. The gasoline that fuels your car is actually 10 percent ethyl alcohol, or ethanol, and that fact has had a profound impact on America's farming landscape. As ethanol use increased over the past 15 years, dozens of giant distilleries — known, more respectably, as ethanol plants — appeared in the country's corn belt. Feeding those distilleries is now a full-time job for roughly 35 million acres, or 55,000 square miles, of corn fields. Offhand, I can't think of a single agricultural product that exceeds the scale of ethanol.

Corn farmers love the ethanol boom, the way any manufacturer loves a big customer. Many environmentalists, on the other hand, despise it. Ethanol is often called a renewable fuel, because you can grow that corn year after year, absorbing carbon dioxide from the air in the process. But growing all that corn for fuel also means more soil erosion, more water pollution, and it can even force the clearing of more land to grow things that people actually eat.

This argument over the virtues and evils of ethanol focuses on one particular law: the Renewable Fuel Standard (RFS), which requires that gasoline manufacturers purchase large and, until this year, ever-growing amounts of ethanol, which they then blend into the nation's fuel supply. (True insiders will protest that gas companies can buy renewable fuel credits, called RINs, instead of ethanol, but the ethanol-boosting effect is the same in either case. So we'll stay away from that rabbit hole.) As you might expect, corn farmers and ethanol producers helped push this law through Congress.

If you oppose government interventions in the free market, as Cruz does, the RFS is an outrage. "End the Ethanol Rip-Off," wrote author Robert Bryce in The New York Times last year. He pointed out that a gallon of ethanol delivers only two-thirds as much energy as a gallon of pure petroleum-based gasoline, and as a result, we're paying about twice as much for that ethanol, per unit of energy, as for petroleum-derived gasoline. The loser, he says, is the American consumer, to the tune of about $10 billion each year.

This view of the RFS is widely shared across the political spectrum, including, for instance, the editorial board of The Washington Post. Groups hurt by high corn prices, including hog farmers and the fast food industry, are on record calling for the abolition or relaxation of the ethanol mandate. In fact, even ethanol's backers, in their fierce defense of the RFS, appear to believe that it is essential for the survival of their industry.

But is that really true? It took ethanol-dissing Ted Cruz's victory in ethanol-loving Iowa's Republican presidential primary to finally persuade me to hit the phones and figure this out.

I found two experts who've examined this question in great detail: Paul Niznik, an analyst at Stratas Advisors, an energy consulting business in Houston, and Scott Irwin, an economist who teaches at the University of Illinois. And here's their bottom line: If the law changed tomorrow and gasoline companies were free to ignore ethanol, they'd almost certainly keep right on blending ethanol into their fuel.

Got that? The ethanol mandate requires gasoline companies to do something that, at the moment, they'd do anyway.

The reason, in a word, is octane.

Octane is a measure of gasoline's tendency to ignite under pressure. If it's too low, the gasoline/air mixture in an engine's cylinders will burn too soon, creating damaging "knocking."

The industry standard for gasoline is 87. But getting gasoline's octane rating up to that standard costs money. It means more refining of the petroleum, or using high-octane compounds in your gasoline formula, such as — you guessed it — ethanol. So gasoline companies aren't using ethanol for its energy — they're buying it for its high octane rating.

There are other compounds that you can add to boost octane levels, but many, like alkylate or iso-octane, are generally more expensive than ethanol. Another additive that is widely used globally, called MTBE, has such a bad reputation for polluting the environment that many states have passed regulations that make it difficult to use.

"As of today, the alternative sources of octane are more expensive," says Irwin, who just updated his calculations on demand for ethanol last week.

Niznik, from Stratas Advisors, says that when corn prices hit a peak in 2012, because of a drought in the Midwest, there were bitter complaints about the ethanol mandate among farmers and people in the food industry who wanted that corn to be used for animal feed. "They were assuming that if we used less ethanol, the price of corn would go down," he says.

"The truth is," Niznik continues, "the [petroleum] refining folks knew in their hearts that if the [ethanol mandate] went away for a while, ethanol use wouldn't drop much. They were looking around at the octane replacements, and knew that those things were really expensive." Niznik says removing ethanol also would have forced gasoline companies to disrupt their refinery operations.

If this is true, though, and the ethanol industry doesn't really need the law that requires ethanol in gasoline, why does it defend that law so fiercely?

"Without the RFS, it's a riskier world" for the ethanol industry, Irwin replies. The RFS was, in fact, necessary to get the ethanol industry off the ground, and even though gasoline companies profit from its octane-boosting qualities, the petroleum industry has always opposed the law. Ethanol companies "believe that they are in a political death match, and that the petroleum industry wants to kill ethanol," Irwin ways.

According to Niznik, there may be some justification for that fear. "Refiners are looking strategically up the road," he says. "They're looking at forecasts of shrinking gasoline demand. They could say to themselves, 'Why should I be giving 10 percent away? I want to sell product that's mine!' "

Switching to petroleum-based octane boosters such as alkylate would not be easy, though. In the short term, Niznik says, it would be self-defeating. Oil companies are competing against each other to make cheap gas, and "the guy with ethanol is probably going to win."

But those other sources of octane are getting cheaper, Niznik says, and in the long run, they might be just as cheap as ethanol. In 10 years, he says, the business case for using ethanol could disappear.

But even that might not be enough. There's a complex set of local, state and federal regulations that also tend to favor ethanol. A few states require a 10 percent blend of ethanol. Others, like California, have air quality regulations that make it very difficult to replace ethanol.

"It would be very hard to unravel things like that," Niznik says. "It's like the tax code. Lots of things are tied into it, and that makes it very hard to change."

But he also expects debate over the ethanol mandate to continue, because "it's a great political football." By defending the Renewable Fuel Standard, or attacking it, politicians define themselves, and their supporters.