Accessibility links
Citrus In The Snow: Geothermal Greenhouses Grow Local Produce In Winter : The Salt Greenhouses could make local fruits and vegetables more available year-round, but they're energy intense. In the Midwest, some growers tap into the Earth's internal heat to warm the structures. 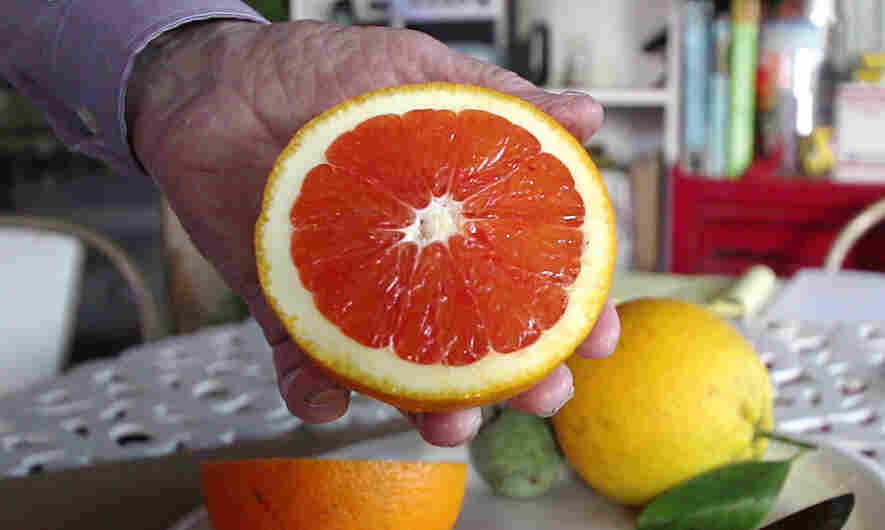 Russ Finch holds up half of a Cara Cara orange grown in his geothermal greenhouse in Alliance, Neb. Courtesy of Grant Gerlock/Harvest Public Media hide caption 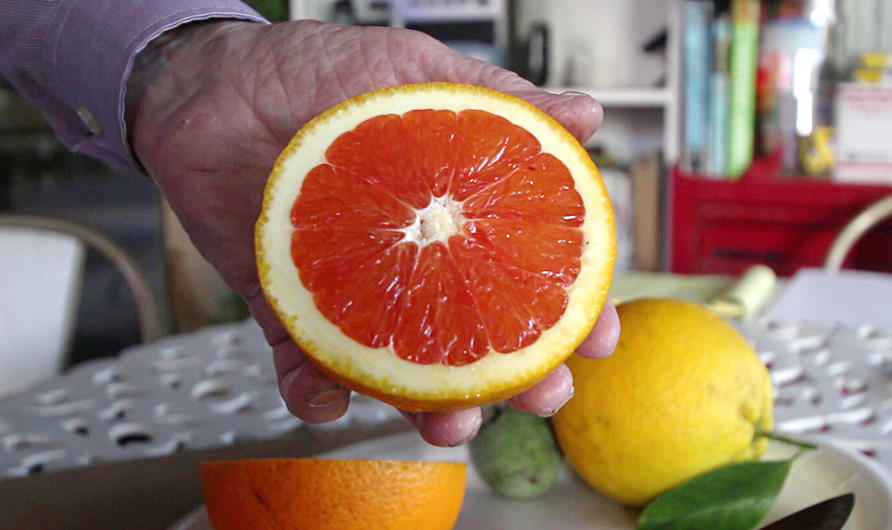 Russ Finch holds up half of a Cara Cara orange grown in his geothermal greenhouse in Alliance, Neb.

For the Midwesterner who likes to eat local, this time of year is a challenge. Browse the produce shelves in middle America — or any place where snow falls in winter — and you'll find carrots from Mexico and peppers from Peru.

Some visionaries think greenhouses could help meet demand for year-round local produce. But there's a problem with greenhouses: They can be energy guzzlers, typically lit and heated by burning fossil fuels.

"It might actually, energy-wise, make more sense to ship from faraway distances, because we do have a lot of energy-efficient ways to ship, including trains, barges and such," says Dawn Thilmany, who studies the local food system at Colorado State University. But if you can cut out those carbon-rich heat sources, growing local greens in greenhouses starts to make sense, she says.

In the Midwest, some creative growers have been tackling that problem by tapping into the Earth's own internal heat to warm and cool greenhouses.

You'll find one of these geothermal greenhouses high on the Nebraska plains near the town of Alliance. Inside, there's a citrus grove with trees holding up a canopy of lemons, grapefruit-sized oranges, green figs and bunches of grapes. Russ Finch, a former mail carrier and farmer, designed the structure, which he calls the Greenhouse in the Snow. The original, which he built more than 20 years ago, is connected to his home.

You don't often see orange trees in Nebraska, but Finch says growing citrus was a way of showing that his geothermal greenhouse could work.

"Any type of plant we saw, we would put it in and see what it could do. We didn't baby anything," Finch says. "We just put it in and if it died, it died. But most everything really grows well. We can grow practically any tropical plant."

The greenhouse design is a take on a walipini, or pit greenhouse. The floor is dug down, 4 feet below the surface. The roof is slanted toward the south to catch as much sun as possible. During the day it can reach well into the 80s inside the greenhouse, but at night the temperature plummets. That's when Finch draws on geothermal heat.

No propane or electric heaters here. Instead, warm air is taken from perforated plastic tubing that is buried underground. The plastic tubes go out one end of the greenhouse and run a loop to the opposite end. A single fan circulates air through those tubes. As the air moves through, Finch says it picks up enough heat from the soil to keep his oranges out of danger.

"All we try to do is keep it above 28 degrees in the winter," Finch says. "We have no backup system for heat. The only heat source is the Earth's heat, at 52 degrees at 8-foot deep."

The greenhouse uses very little energy, almost entirely pushing fossil fuels out of the picture, and keeping energy costs down to about $1 a day, Finch says. Energy costs can make or break a greenhouse in parts of the country with cold winters.

"There have been hardly any successful 12-month greenhouses on the northern High Plains because of the weather," Finch says. "The cost of energy is too high for it. But by tapping into the Earth's heat, we've been able to drastically reduce the cost."

Finch grows a few hundred pounds of fruit each year to sell at local farmers markets, but his main business is selling the design for his greenhouse in the snow. A new greenhouse costs $22,000 to build. So far, he says, 17 of them have been built in the U.S. and Canada. That includes one at a high school in nearby Alliance, Neb., where students grow tomatoes, cucumbers and other vegetables to serve in school lunches.

And there are other designs for low-energy greenhouses out there. Some use a kind of thermal banking or solar battery, where they store solar heat during the day to release it through the night. Some move hot air or heated water under the floor of the greenhouse to provide heat from the bottom up. These greenhouses in Colorado use black barrels filled with water to radiate residual heat they soak up from the sun.

These low-energy greenhouse designs aren't necessarily new, but interest in local, sustainable food is driving more interest in incorporating these ideas, says Stacy Adams, a horticulture and greenhouse management instructor at the University of Nebraska Lincoln. He says all these methods have the same goal: to find a sustainable way to grow produce through the cold winter nights. 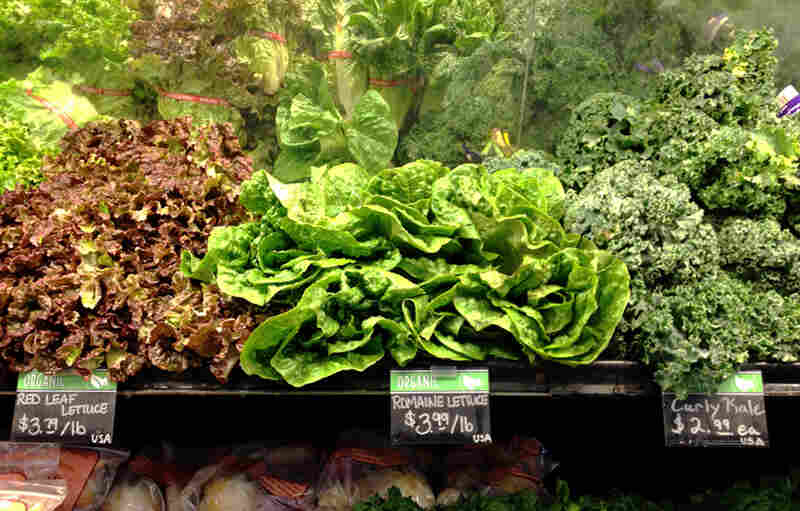 Generally, locally grown fruits and vegetables have a lower carbon footprint because they travel a shorter distance to consumers. But for produce grown in a greenhouse heated with fossil fuels, that carbon advantage is likely lost. Courtesy of Grant Gerlock/Harvest Public Media hide caption 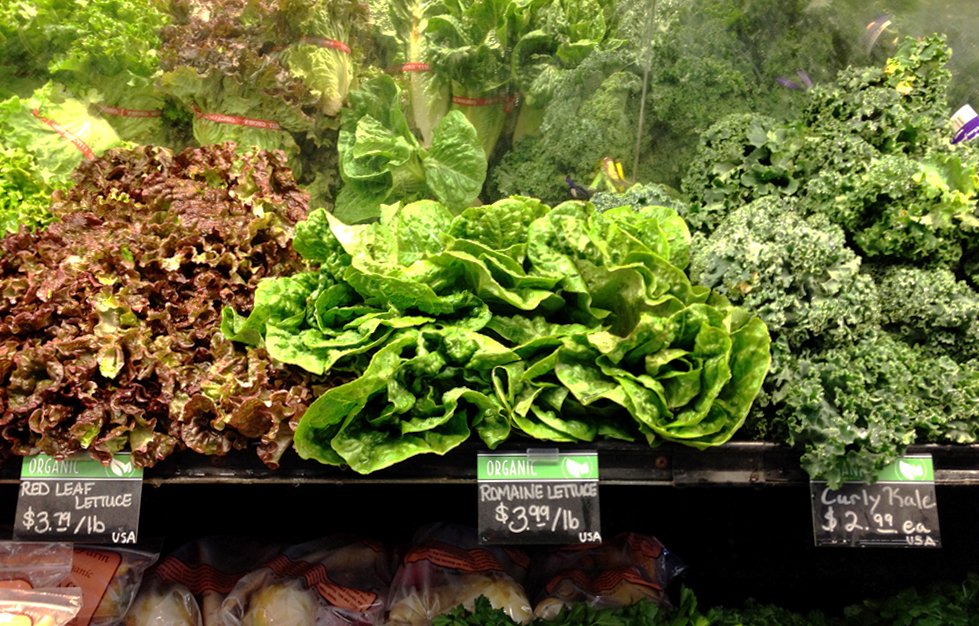 Generally, locally grown fruits and vegetables have a lower carbon footprint because they travel a shorter distance to consumers. But for produce grown in a greenhouse heated with fossil fuels, that carbon advantage is likely lost.

Adams says geothermal greenhouses can work, but there are limitations to that kind of low-energy system. For instance, he says they're best-suited for cold crops like kale, cabbage or lettuce.

"When we start getting to the warmth-loving crops like tomatoes, which everyone loves, or cucumbers and squash, then we're talking about greenhouses that need to be much warmer," Adams says. He says it's actually easier to grow oranges in a cold greenhouse than tomatoes.

And, he says, a low-energy greenhouse is most efficient if it's relatively small. Russ Finch's original greenhouse design is about 1,200 square feet, which means it might supply a farmers market, but probably not a supermarket.

To grow more, you'll need more energy. Perhaps fossil fuels. But that's where Adams says people should think outside the box. Imagine using heat from the wastewater at a factory — like a slaughterhouse or an ethanol plant. He says manure from dairy barns or beef feedlots could generate methane to heat a greenhouse.

He says any method that incorporates renewable energy sources would improve the footprint of local food grown in a greenhouse when compared to the shipments brought in from California or Mexico.

And that could help give winter more of a local flavor.