Accessibility links
What The Heck Is Natural Wine? Here's A Taste : The Salt Natural wines can be off-putting at first: perhaps darker than usual, a little fizzy or cloudy. Some find them charming, others unsophisticated. Here's a guide to this trending, quirky style of wine. 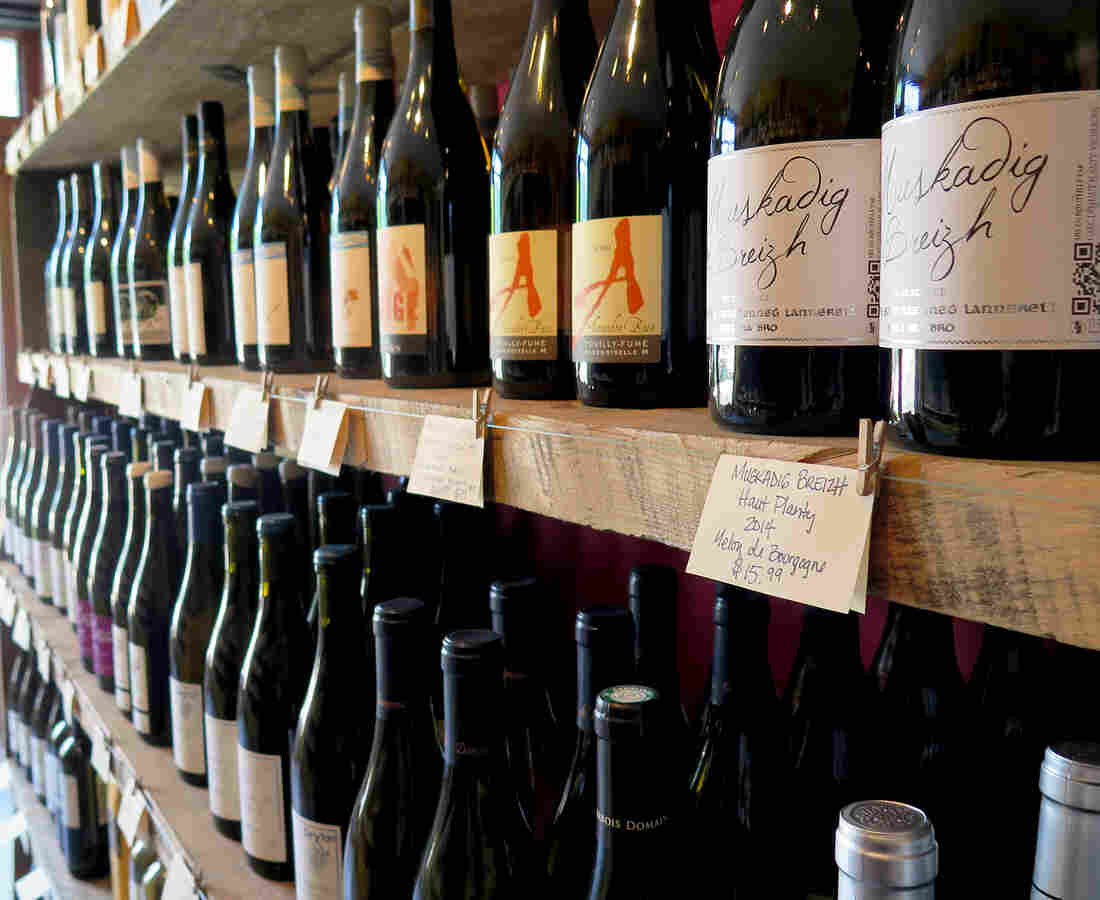 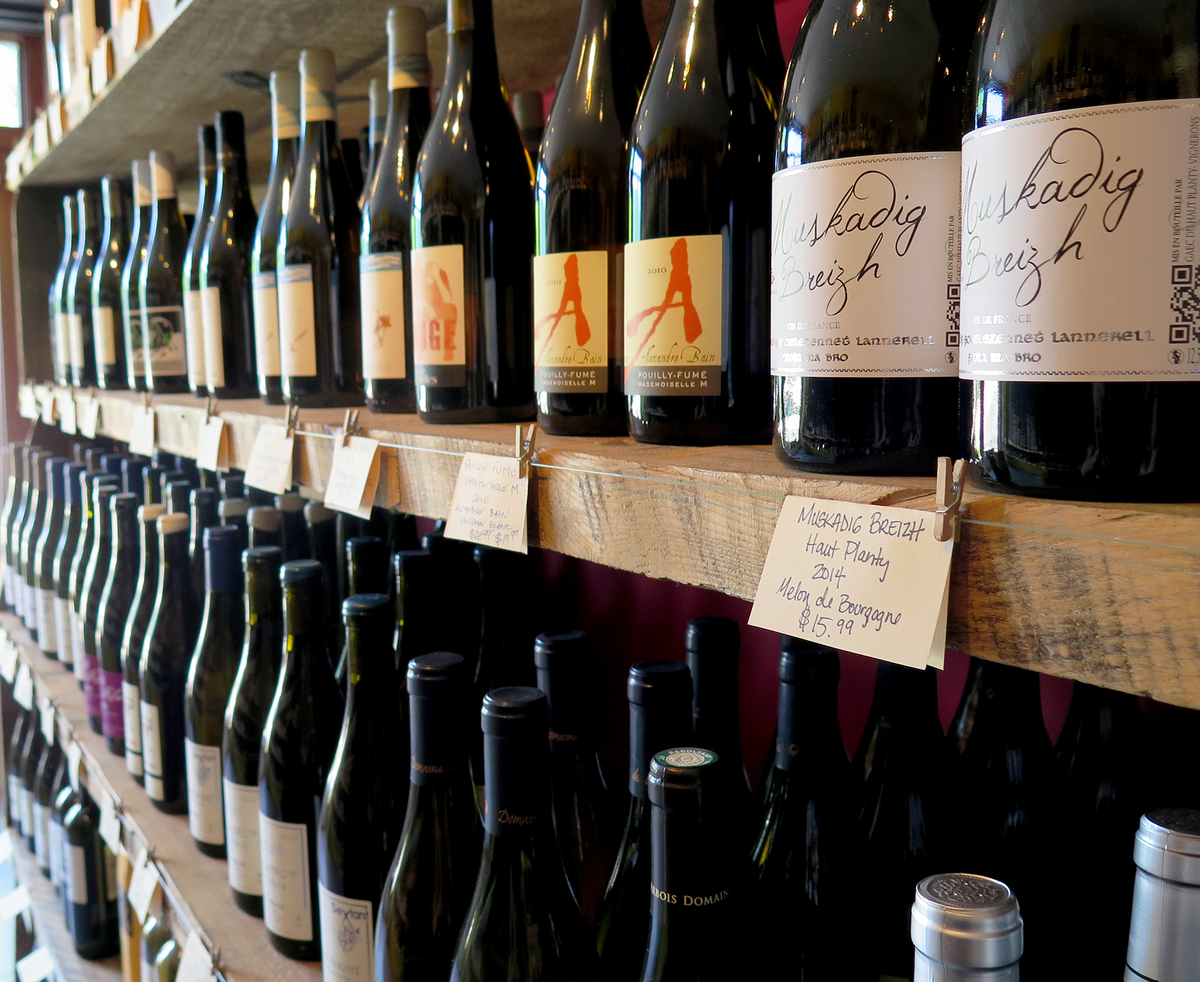 Bottles for sale at Passage de la Fleur, a natural wine shop in Brooklyn, N.Y. For some, natural wines must be completely unadulterated — without the use of sugar, clarifiers or other additives common in modern winemaking. Other natural winemakers, however, will use a little sulfur dioxide or added yeast to correct problems, according to Stephen Meuse, a wine buyer in Massachusetts.

If you follow the vast world of fermented grapes, you may have noticed an influx of so-called natural wines. I fell under their spell a few years ago. Apparently, I'm not alone. There's something of a natural wine cult blooming in shops, bars and restaurants around the U.S.

Natural wines can be mystifying: The first time you drink them, they may be off-putting and nose-wrinkling. Some (especially the whites and roses) can be darker than usual, a little fizzy, cloudy or with good-sized clumps of yeast floating about. They're often rough, which some people find charming. Others think they're unsophisticated.

This quirky style of wine is quietly trending. So I reached out to a few experts to compile a primer of sorts.

He says natural wine is hard to define. "In theory, it's taking fruit that is grown at least organically, then taking it into the cellar and adding nothing, while also not taking anything away."

But to really understand natural wine, Meuse says you first need to understand how most modern wine is made.

Most winemakers use additives to create consistent outcomes. For instance, carefully chosen, cultured yeasts are routinely relied on for fermentation. This gives the vintners the ability to control the process and customize flavor profiles. Those raspberry/banana notes you can find in a Beaujolais Nouveau? Specific yeasts help produce them.

Modern winemakers also make generous use of sulfur dioxide to prevent oxidation and bacterial growth. It also helps wine keep its brightness and snap, Meuse says. By some accounts, sulfur dioxide has been used in winemaking since the 15th century. 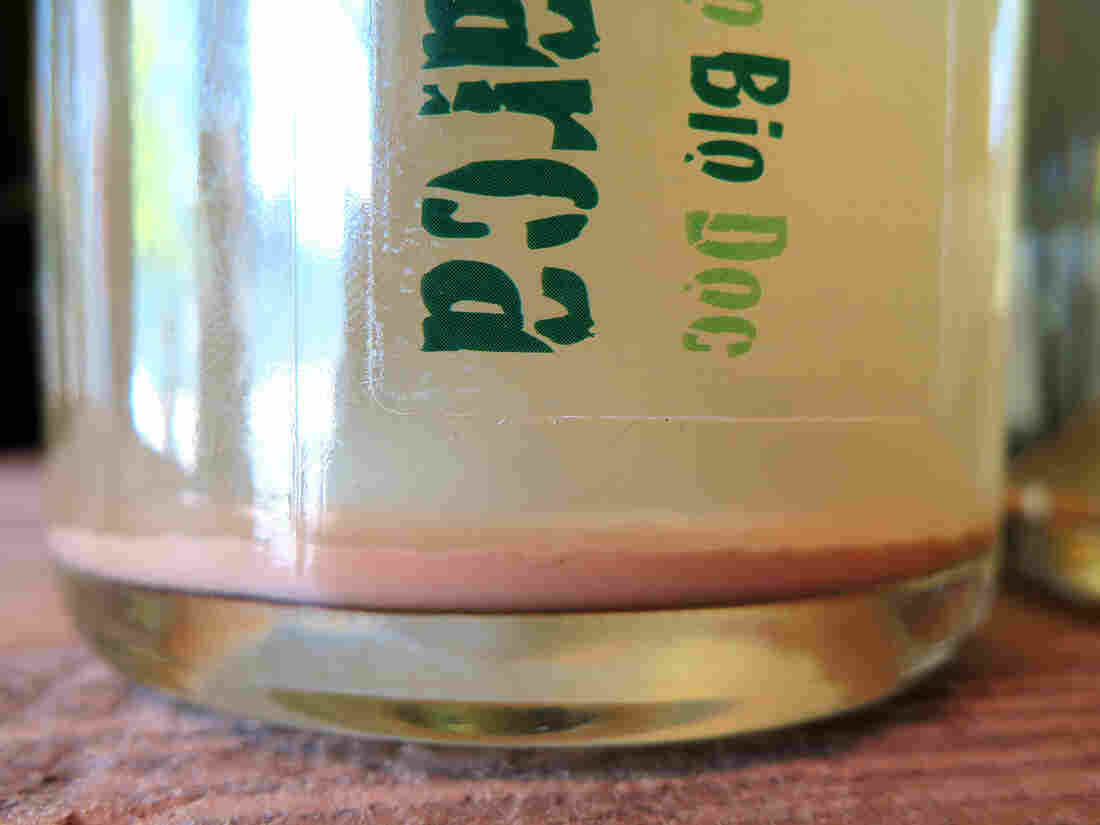 A close-up of Terre di Marca, a natural Prosecco from Italy sold at the Passage de la Fleur wine shop in Brooklyn, N.Y. The wine is unfiltered, and the sediment collected in the bottle's bottom is yeast. Andrea Shea for NPR hide caption 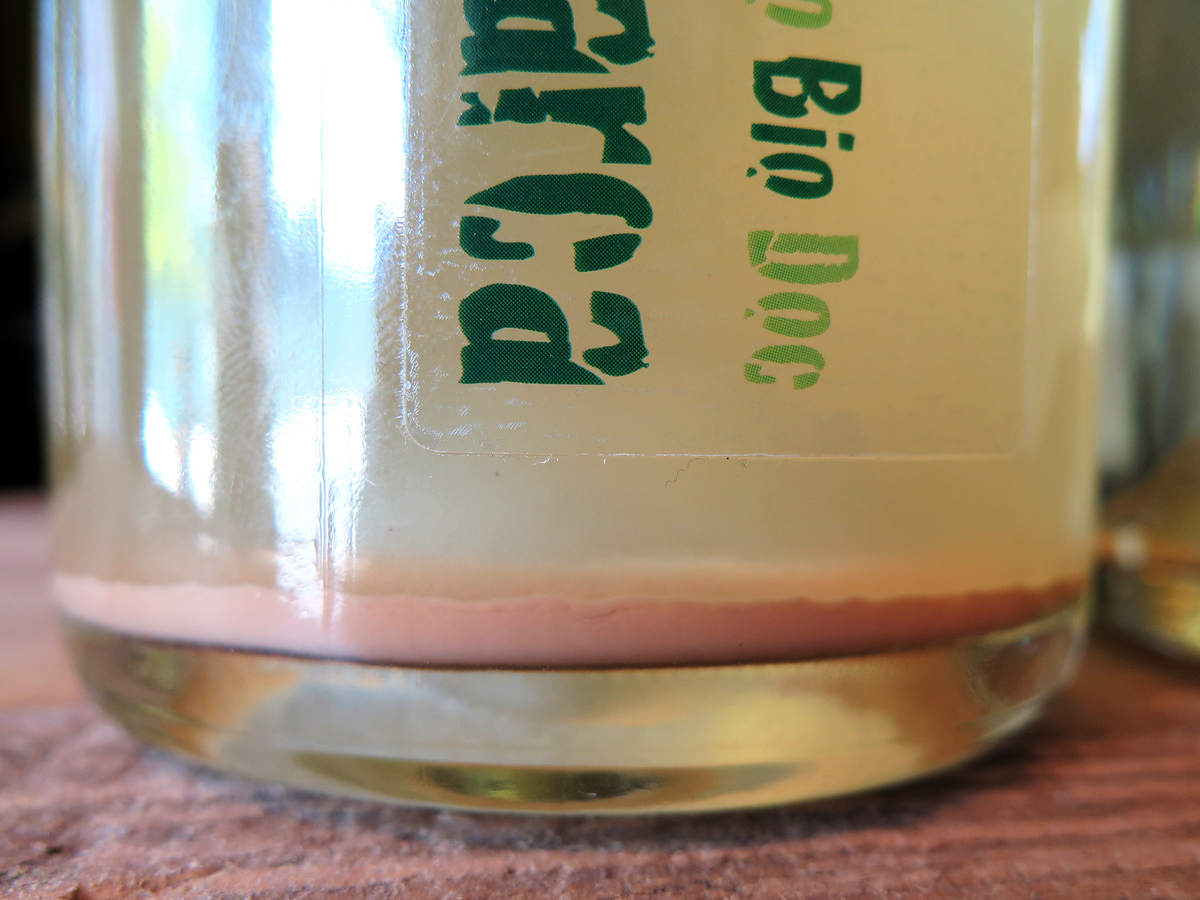 A close-up of Terre di Marca, a natural Prosecco from Italy sold at the Passage de la Fleur wine shop in Brooklyn, N.Y. The wine is unfiltered, and the sediment collected in the bottle's bottom is yeast.

As for the naturalist winemakers, "On one end, you have people trying to edge themselves toward fewer additives, no additives, organic fruit — but then [they] will rely on a little sulfur or added yeast to correct problems," Meuse says. "And then, way out on the extreme end, are people who farm organically and then insist on letting the wine completely take its own direction. They're OK with organic matter in the bottle. And their wines take on different flavors. ... tangy, cloudy, yeasty." In the most extreme examples, Meuse adds, "you get wines that can remind you more of cider than wine."

Natural, unfiltered wines are still alive and can exhibit yeasty, microbial action. It's fun to observe their character changing as it sits in your glass.

'Organic' Does Not Mean Natural

But not all wine that's labeled organic would be considered "natural," says Philippe Essome, who goes by the name Fe Fe. He opened Passage de la Fleur, a natural wine shop in New York, about three years ago. And here's how he defines the difference:

"Organic wine is wine made without any chemicals in the vineyard. Then the issue is that after vinification [the conversion of fruit into fermented wine], the makers have no limitation." For instance, organic winemakers can add sugar and clarifiers (aka fining agents) made with fish and animal products, including egg whites, Essome says.

In his view, natural wine must be unadulterated. But Essome says there isn't much of a way to verify what's behind an organic or natural wine label. While a rigorous certification process exists for labeling organic food, that's "not something that's happening yet in the wine business," he says, adding, "People are trying to fight for that."

That's why he calls the natural wine business something of a Wild West.

"Natural wine is about 1 percent of the wine produced in the world," Essome says, "so it's a fairly big amount. It involves thousands of people, but it's still a work in progress."

Some vintners take a more hardcore view of how a natural wine should be made. Brian Smith founded Oyster River Winegrowers, a "horse-powered vineyard" in Maine. He calls his natural wine a "pre-industrial wine" and explains his approach.

"Pre-industrial wine[making], to me, is making wines with the same tools as were used in pre-industrial times," he says, continuing, "No tractors, locally available, plant-based teas sprayed for pest control and fertilization, no temperature control, no acidification/de-acidification, no fining, native yeasts where they make sense, no filtering, and bottling with little or no SO2 (sulfur dioxide) additions."

Smith works in a winery/barn heated with wood harvested from the farm and hauled by the same horses that plow the vineyards. Oyster River currently produces about 1,200 cases of wine and cider per year.

As for the natural wine trend, Smith says, "The marketplace is definitely interested. It is niche right now, and maybe it always will be. But increasingly, people are becoming more aware and caring about what is in their food. Wine, because there are no ingredient labeling requirements, seems to be one of the final frontiers."

Orenda Hale and her husband, Peter, include some Oyster River Winegrowers products in their portfolio of 350 natural wines at Maine & Loire, their shop in Portland, Maine. Before venturing to Maine, the Hales worked in New York City, where Orenda says natural wine's fan base continues to grow.

She says the key to helping people appreciate natural wines is to provide customers with the proper context and help them get in tune with their palate. "We want the shop to feel kind of like a record store, with a dialogue that expands and deepens," she says.

But not all natural wines are worth knowing, says Dave Saul, the wine manager at The Spirited Gourmet in Belmont, Mass. He says plenty of vintners "use natural wine as an excuse for inconsistent, faulty wine." The hands-off approach can yield inconsistent, volatile results, he says. "But when it's great, there's nothing better than natural wine."

Consumers aren't always keen to familiarize themselves with this unusual style of wine. Stephen Meuse told me he's offered a few natural wine lectures/tastings at Formaggio Kitchen in Cambridge. "They didn't sell, and I had to cancel," he recalls.

While Meuse believes natural wine is titillating to many, he acknowledges there's a steep learning curve — "for winemakers for sure, and there's a steep appreciation curve for customers." 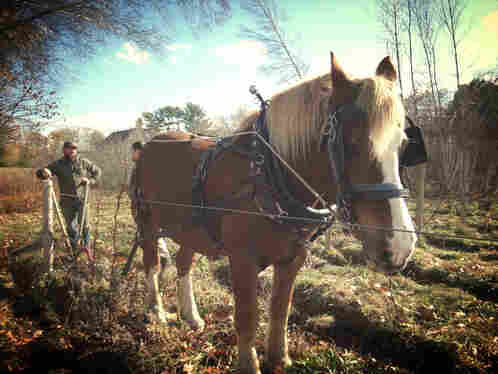 Natural wines can come across as faulty, Meuse adds. He says they can be full of aldehydes — chemical compounds formed by oxidation, which can be desirable or faulty, depending on the style of wine. These wines "can be dark, oxidized, flat on the fruit, broad in texture."

"But it's a different way of doing it," he notes. "It's like people looking at a Picasso and saying, 'This guy can't draw.' "