Accessibility links
Dinner With A Side Of I Do's: For Restaurants, Proposals Are Good Business : The Salt Marriage proposals are pretty routine at America's high-end restaurants. They can lift the mood in the entire dining room, boost tips and create lifelong customers. Unless the answer is "no," that is.

Dinner With A Side Of I Do's: For Restaurants, Proposals Are Good Business

Dinner With A Side Of I Do's: For Restaurants, Proposals Are Good Business 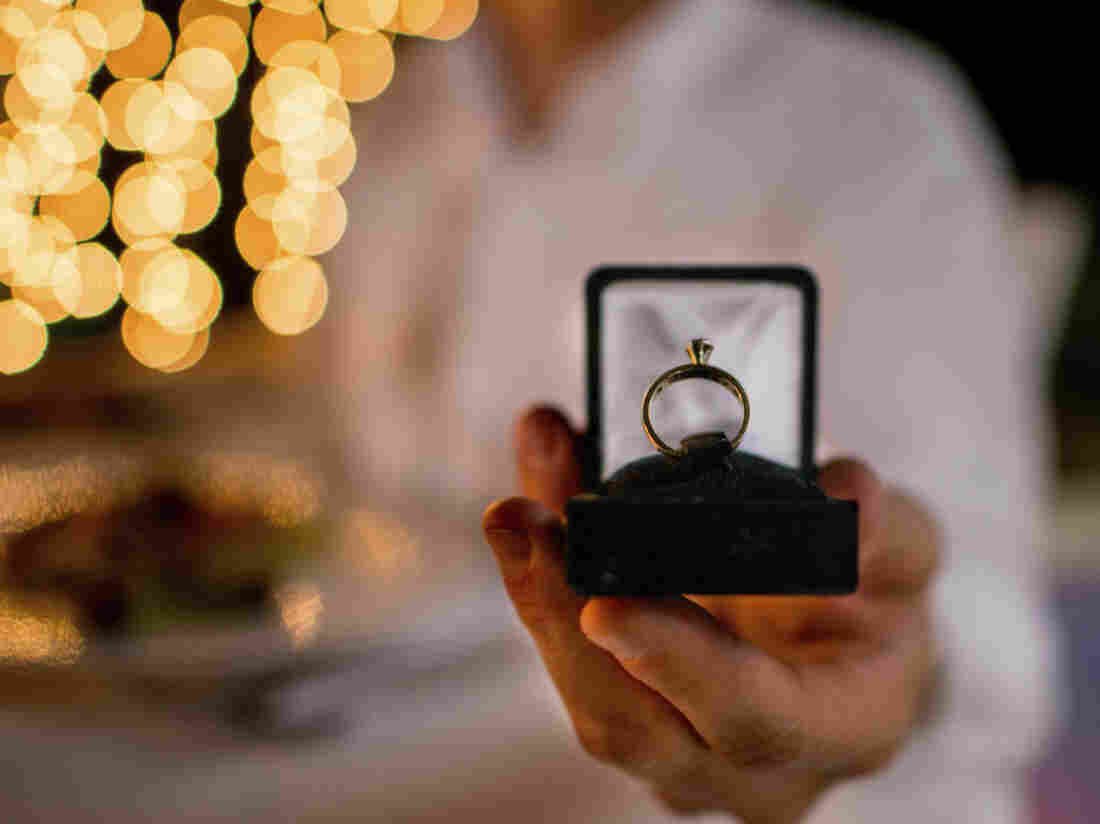 Marriage proposals are pretty routine at America's high-end restaurants. They can lift the mood in the entire dining room, boost tips and create lifelong customers. Unless the answer is "no," that is. iStockphoto hide caption 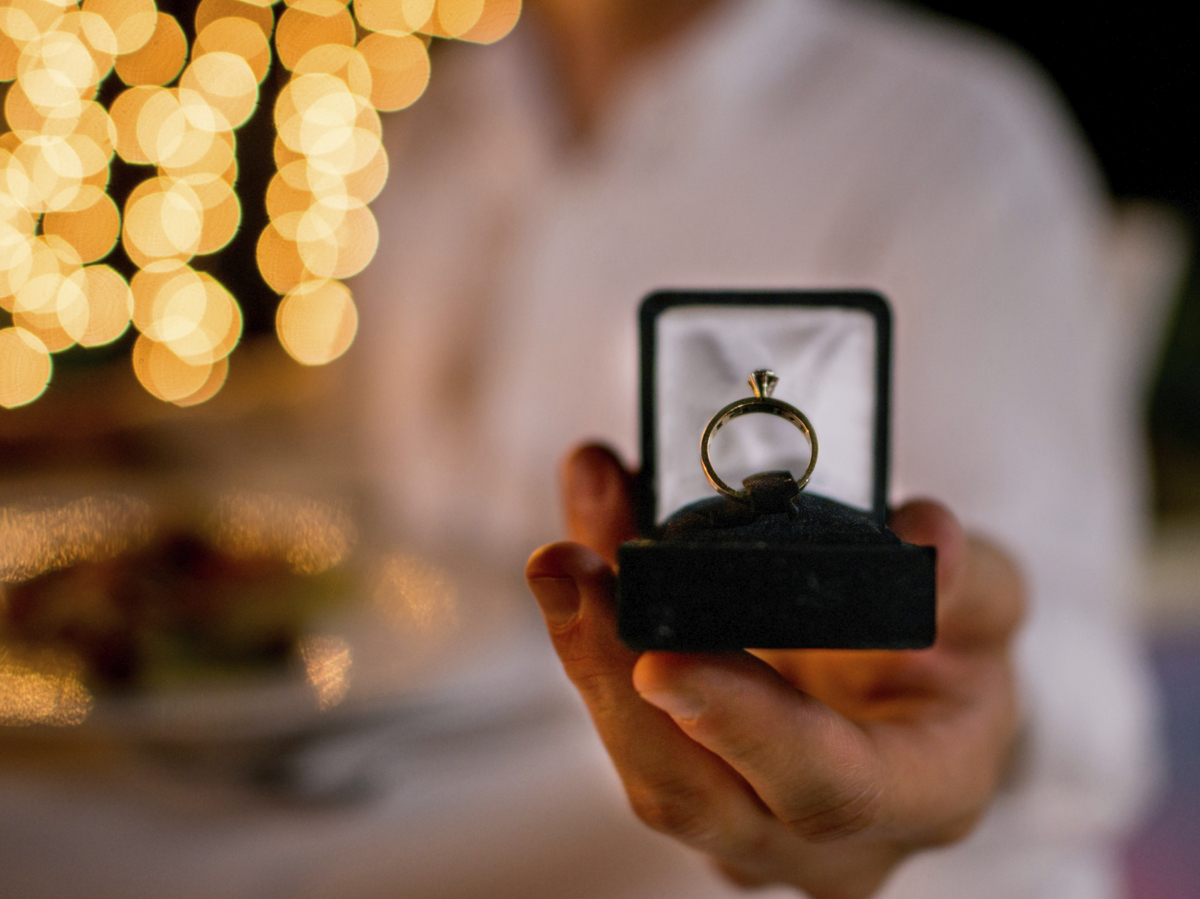 Marriage proposals are pretty routine at America's high-end restaurants. They can lift the mood in the entire dining room, boost tips and create lifelong customers. Unless the answer is "no," that is.

If you work in a restaurant, marriage proposals are good for business. Happy couples lift the mood in the entire dining room and often turn into lifelong customers. That once-in-a-lifetime experience for them is pretty routine for restaurateurs.

High-end restaurants with nice decor can count on someone popping the question every week or two. At a few rooms with big views, such as The Sun Dial in Atlanta or the Eiffel Tower in Las Vegas, proposals are a daily occurrence.

"It's very, very common, and we absolutely love it," says Ti Martin, one of the owners of the famed Commander's Palace in New Orleans. "I'm a sucker for a good proposal."

Remember the opening scene of that 1987 movie Moonstruck, when Danny Aiello proposes to Cher? He gets down on his knees, the waiter worries he's ruining his suit and a neighboring diner tut-tuts that he didn't spring for a ring. Once Cher accepts, the whole place bursts into applause.

It's a comic version of what commonly happens in real life. Proposing in a restaurant might be the ultimate public display of affection, but no one seems put off. "If anything, it puts the entire restaurant in a good mood," says Don Saunders, chef and owner of The Kenwood in Minneapolis.

Servers can be as surprised as anyone else. The guy bends the knee, she accepts and everyone is happy. (It is usually the guy, still, who asks, according to restaurant owners we spoke with – though they told us they're seeing more gay couples propose in-house.)

Unless she says no. Then it gets awkward for everybody. Along with the nervous suitor, restaurant managers say they all hope for a happy ending. "Getting a 'no' when you're surrounded by other diners — the gentleman is embarrassed, and you get a disappointed environment," says Duncan Newman, general manager of the Briarwood Inn in Golden, Colo.

Usually, restaurants get tipped off in advance. The groom-to-be will call up and ask for a special table, or maybe something personal printed on the menu.

Managers laugh at the fact that some guys only mention their proposal plans in a note box through an online reservation service such as OpenTable. Pro tip: Talk to a live person.

Typically, the proposal comes after the entree and before the dessert. Or with it. The Knot rates having a box with a ring arrive on the dessert tray as one of the "most romantic ways to propose."

Wherever they get the idea, guys seem to view a ring as the most tempting dessert choice possible. "Sometimes we have them want to put the ring in a bread pudding souffle," says Martin, the Commander's Palace owner. "I think the ring can get kind of sticky."

Sometimes we have them want to put the ring in a bread pudding souffle. I think the ring can get kind of sticky.

Aside from being nervous about taking responsibility for an expensive ring for a couple of hours — and having to make sure its intended recipient sees it upon presentation and doesn't accidentally swallow it — restaurant workers hate the wait.

Often, the entire staff on a shift has been alerted that a proposal is coming. It's important that no one giggles or gawks or offers premature congratulations — anything that could tip off a woman who may have her suspicions already.

Some managers make sure their most experienced hands are taking care of the couple.

"We're in a chopped up old house, and a balcony overlooks our dining room," says Kenny Lyons, general manager of Husk Nashville, the Tennessee outpost of Husk, from acclaimed chef Sean Brock. "Everyone [on staff] wants to peek over, but we can't allow it. It would tip the lady off."

Once she accepts, restaurant workers and managers are happy to send over champagne or snap pictures. Sometimes they've worked things out with the guy to bring over friends or members of the family.

Chandlers, a steak and seafood restaurant in Boise, Idaho, facilitated a Brady Bunch-style engagement a couple of months ago, with kids from the couple's previous marriages hiding over by the bar. "The four children each held up a sign, like at a baseball game, 'Will-you-marry-me,' " says Chandlers general manager David Boyle. "That was a cool deal. That got the attention of the room."

Patrons sometimes take off in a horse-and-carriage — or even a helicopter. Generally, they hang around, basking in their self-produced glow. "Because they're celebrating, they buy extra champagne, they tip better, they're in a good mood," says Trey McCutcheon, manager of Chez Nous in Charleston, S.C.

They may or may not live happily ever after, but couples tend to remain loyal to the restaurants where they got engaged. After In Good Company in Rockland, Maine, changed its logo recently, a couple who got engaged there called and asked to take home something with the old design for a souvenir. "They come for their anniversary, they were here for their engagement," says owner Melody Wolfertz. "They wanted to buy my old sign to hang in their house."

"That's almost too cliche," he says. "You go to a restaurant on Valentine's Day, eat dinner and propose. It's almost too storybook."