Accessibility links
Study: Program To Protect Fish Is Saving Fishermen's Lives, Too : The Salt Catch share programs — where fishermen are allotted a set quota of the catch --reduce the notoriously risky behavior fishermen are known for, like sailing in stormy weather, a new study finds. 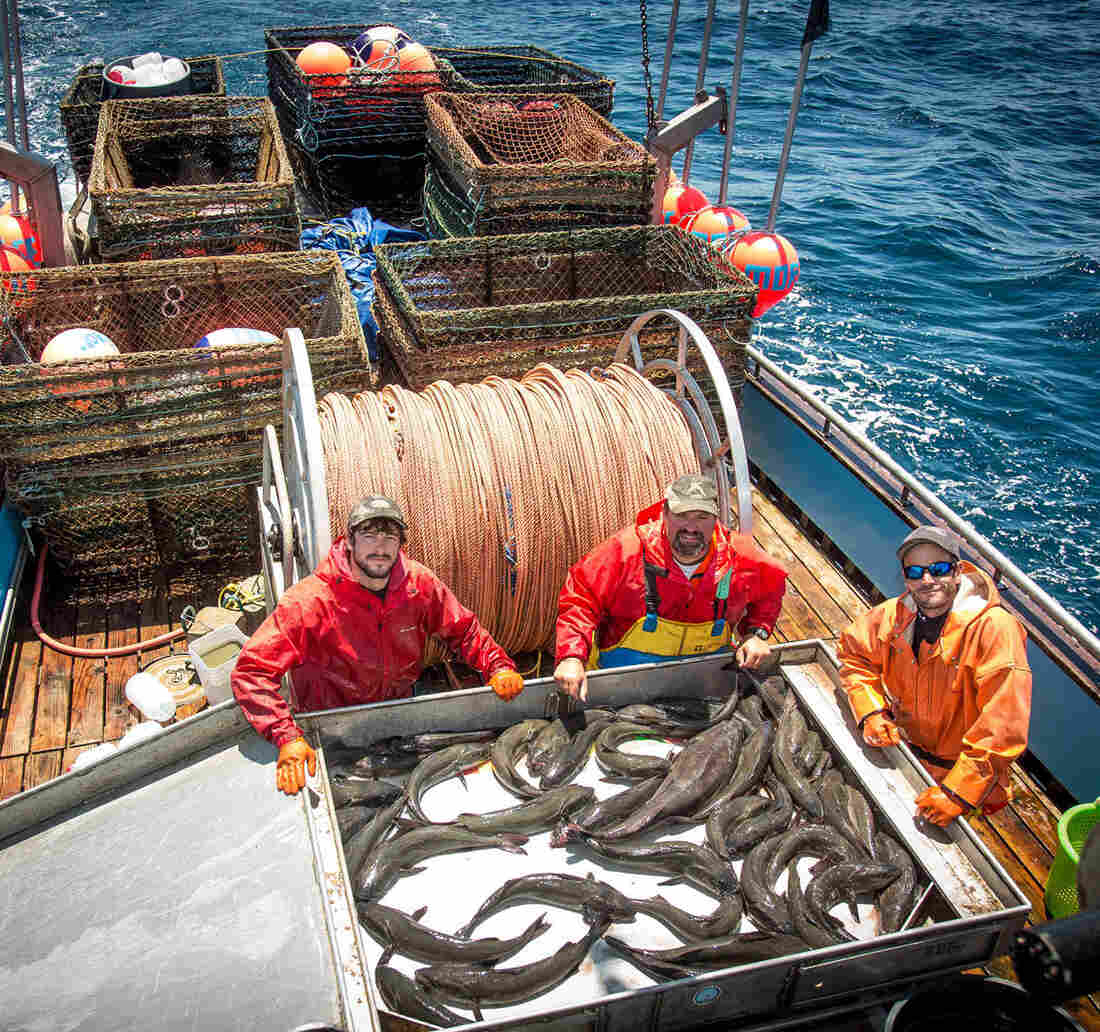 The captain and crew of the Moriah Lee pose with sablefish caught off the coast of Half Moon Bay, Calif. A new study found that fishermen in the West Coast sablefishery were much less likely to engage in risky behavior — like sailing out in stormy weather — after catch share quotas were implemented. Courtesy of Ethan Righter hide caption 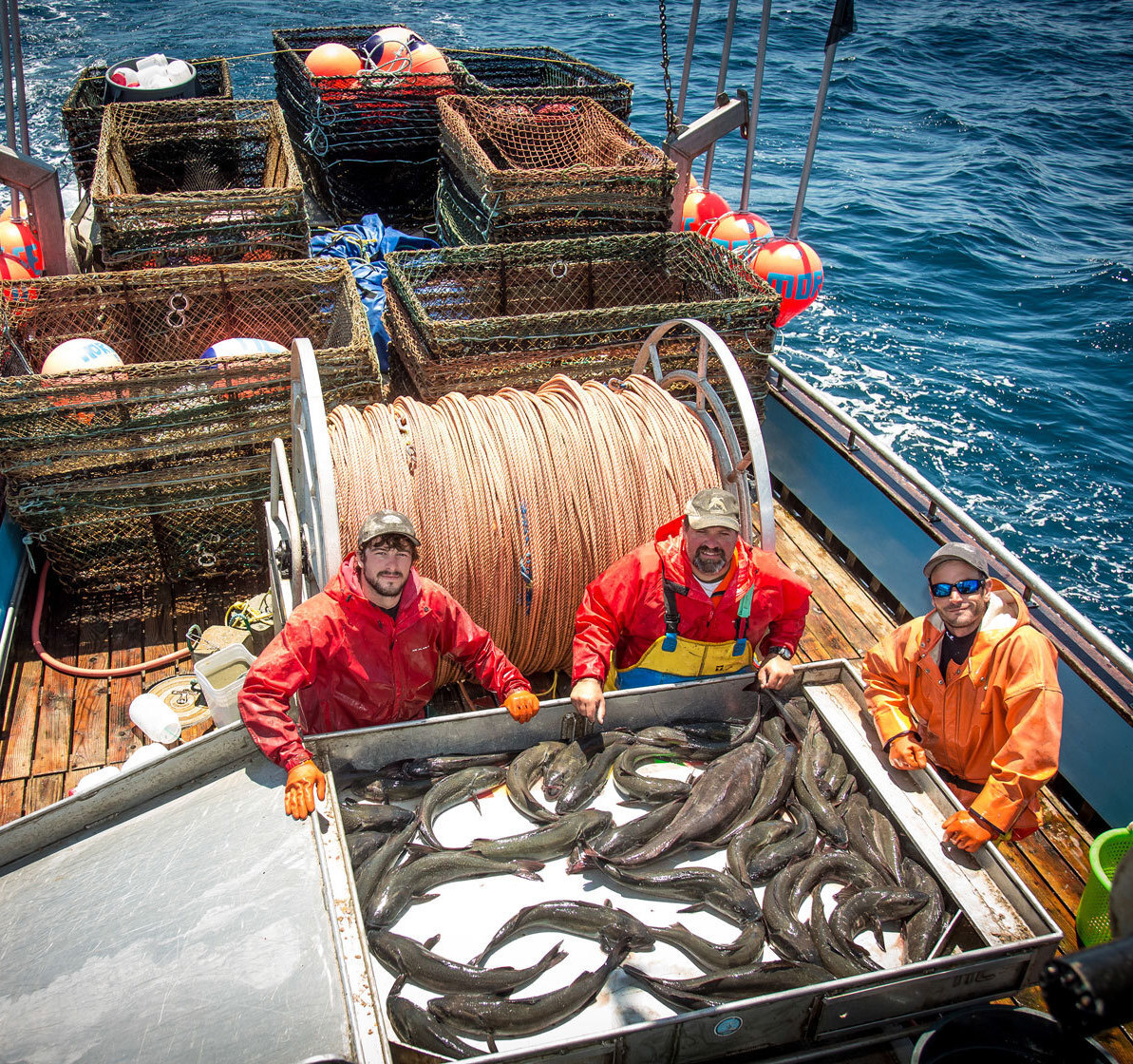 The captain and crew of the Moriah Lee pose with sablefish caught off the coast of Half Moon Bay, Calif. A new study found that fishermen in the West Coast sablefishery were much less likely to engage in risky behavior — like sailing out in stormy weather — after catch share quotas were implemented.

A program used in many U.S. fisheries to protect the marine environment and maintain healthy fish populations may have an immensely important added benefit: preserving the lives of American fishermen.

That's according to a new study published Monday in the Proceedings of the National Academy of Sciences. Researchers found that catch share programs (where fishermen are allotted a set quota of the catch) reduce some of the notoriously risky behavior fishermen are known for, such as fishing in stormy weather, delaying vessel maintenance, or heading out to sea in a boat laden with too much heavy fishing gear.

Traditional fishery-management programs open and close fishing seasons on specific days. By contrast, catch shares work on a quota system, under which fishermen have a longer window to harvest their predetermined share. That gives fishermen the luxury (and perhaps the life-saving option) of time.

The findings don't surprise Scott Campbell Sr., who spent most of his 35-year career fishing the Bering Sea for king crab the way it used to be done: derby-style. Crab season would open, and regardless of weather, Campbell and his crew would be on the water, hoping to nab enough crab during the season's brief window to keep his business afloat.

"If you can picture a four-day season for crab — and that's the only four days you're going to get — and a 50-knot storm blows in for 24 to 48 hours of that four days, well, a lot of boats didn't stop fishing, because that was their only revenue stream for the whole year," says Campbell. "It forced us to take unnecessary risks for financial survival." (His son, Scott Campbell Jr., is a former star of Discovery Channel's Deadliest Catch, about the hazards of the fishing industry.)

That kind of risk-taking has historically made fishing one of the nation's most dangerous professions, with a fatality rate more than 30 times the U.S. average, according to the new report.

Today there are approximately two dozen state and federal catch share programs in the U.S. Most launched in the last decade. However, derby-style fishing still exists in many U.S. regions, including the Pacific and Atlantic swordfish fisheries, the Northeast's monkfish and herring fisheries, and the West Coast dungeness crab fishery.

Plenty of studies have looked at the environmental benefits of catch share programs — such as the reduction of bycatch, the ability to maximize the value of the catch, and direct impacts on the way fisheries are managed. But what makes this paper innovative is that it's looking at actual risk-taking data, says the study's author, Lisa Pfeiffer, an economist at the Northwest Fisheries Science Center.

Pfeiffer examined the impact a catch share management program had on fishing safety by looking at the particularly data-rich West Coast sablefish fishery.

In 1994, the fishery had a nine-day season and was managed with traditional commercial fishing licenses. In 2001, it transitioned to a catch share management system, with a set quota divided among fishermen and a season that now lasted seven months. Pfeiffer crunched data pulled from fishing records with information from the National Weather Service. She tracked high wind days — where fishermen would face rough waves and stormy conditions. And she found that, under the catch share program, fishermen were far more likely to keep their boats docked than risk their lives at sea — fishing trips on high wind days dropped by 79 percent.

"Usually, catch share programs are implemented for environmental or economic reasons. Safety is probably not the goal at the outset, but it's one of those things that gets realized almost immediately, whether you're fishing in tropical waters like the Gulf of Mexico or in the cold waters of Alaska," says Fitzgerald.

Not everyone is convinced that catch share programs help all fishermen equally. Many worry that these programs push small fishermen out of the market. That includes Niaz Dorry, coordinating director for the Northwest Atlantic Marine Alliance, a fishermen-led nonprofit that focuses on marine biodiversity.

She says fisheries that operate under catch share quotas "probably have [fewer] incidents because there are fewer boats involved and fewer fishermen. When fleet consolidation from catch shares happens, and you go from 200 smaller boats to five large boats, you're going to have fewer deaths because you have fewer fishermen at sea," Dorry says.

Indeed, the study did note a 30 percent reduction of the sablefish fishery's fleet size. But Pfeiffer, the study's author, suggests that more boats in the water would have buoyed the safety findings.

"If there's a change in the size of the vessels fishing, that could be a contributing factor," she says, because larger ships may withstand stormy weather better. "But in this case, the boats fishing for sablefish aren't the huge processing vessels you may imagine. Here they have a two- or three-member crew on board," says Pfeiffer.

But Dorry says that there are other ways to protect the lives of fishermen without pushing small fishermen out of the market. She points to community supported fishery programs, which create a ready-made market for what fishermen are able to catch, regardless of weather.

"Finding markets that understand fishermen better gives them more control over when they should go fishing and other means of staying safe at sea," she says.