Accessibility links
Oh, Nuts! U.S. Pistachio Growers Worry About Competition From Iran : The Salt Iran is historically known for its pistachios. With sanctions against Iran lifted, its growers are free to sell in the U.S. Iranian nuts haven't flooded the U.S. yet — but that could soon change. 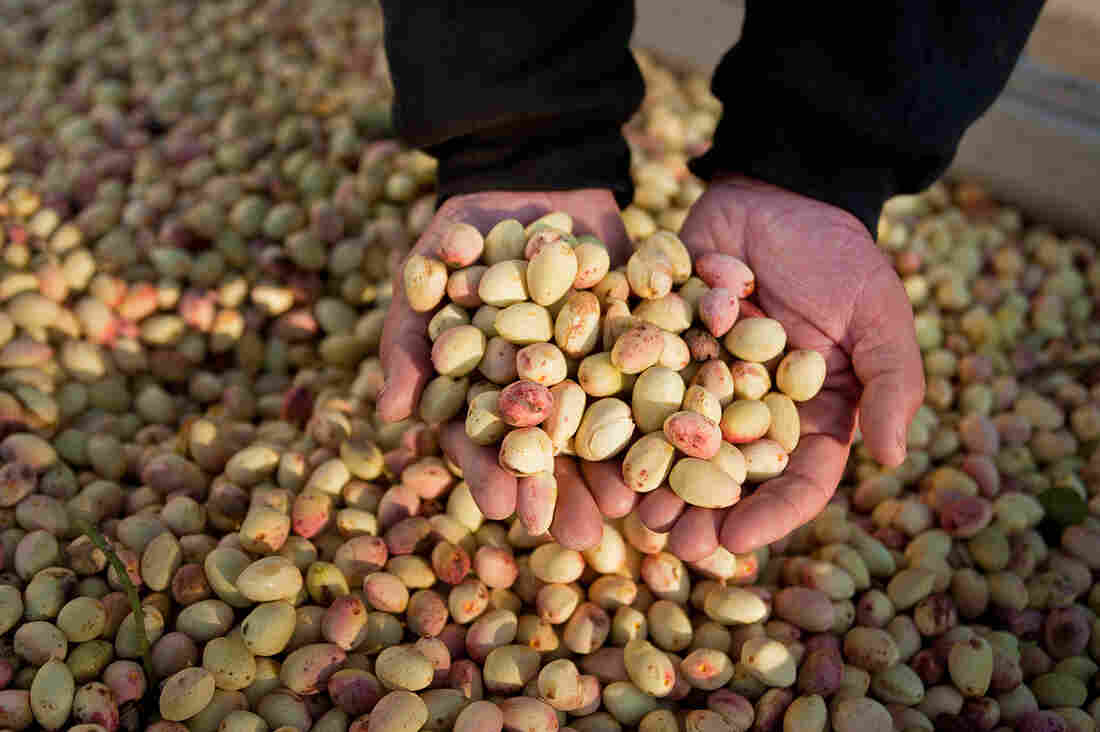 A ranch manager holds pistachios at a farm in Madera, Calif. The lifting of sanctions on Iran has California growers worried that Iranian pistachios will flood the U.S. market. Justin Kase Conder/AP hide caption 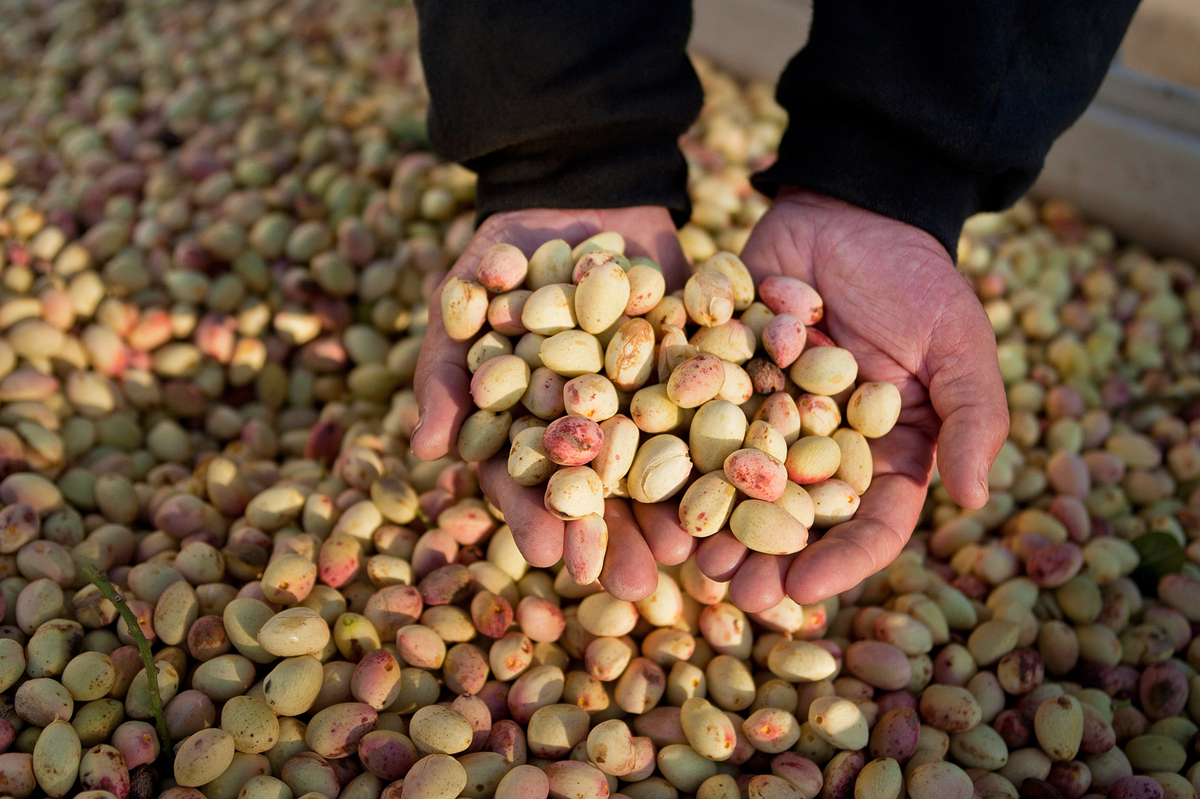 A ranch manager holds pistachios at a farm in Madera, Calif. The lifting of sanctions on Iran has California growers worried that Iranian pistachios will flood the U.S. market.

Last year was a terrible season for the American pistachio industry. Warm temperatures and the lack of water resulted in a loss of almost half the crop, and profits were down by around $1.4 billion from 2014. This year, the industry is hoping to recover, but growers across the country may face a different issue: competition stemming from the lifting of sanctions against Iran.

Iran is historically known for its pistachios. They're one of the country's main non-oil exports, sold in large quantities to places like China. Until about 30 years ago, a large amount of the pistachios sold in the U.S. were from Iran.

The American pistachio industry didn't boom until an embargo was put in place on the Iranian nut in the wake of the Iran hostage crisis of 1979-81. Jim Zion, with Meridian Growers in Clovis, Calif., says this opened the door for the U.S. pistachio market to flourish.

"An average consumer, they would see an American pistachio and an Iranian pistachio, and they're going to say, yeah, there's something different," Zion says. "Ours tend to be round; theirs tend to be a little more long. Almost in every other market around the world, we compete with them on a day-to-day basis."

In early January the sanctions against Iran, including those on pistachios, were lifted because Iran has reduced its nuclear program. That has lots of people asking questions about what the change will mean for the American pistachio industry. Farmers keep calling Zion, worried that Iran will flood the U.S. market with foreign nuts.

"We've had a lot of growers calling, asking. And I said, 'It's the way the world is,' " says Zion, who markets around 60 million pounds of pistachios, almonds and pecans on behalf of U.S. farmers annually.

He doesn't think farmers should fret over the decision, because even if there is more competition domestically, there are plenty of other countries eager to buy the American nut.

"I'm not that concerned, to be honest," says Zion. "It doesn't matter whether I sell this product to someone in Chicago or someone in Singapore. It's all the same for me."

There's another reason why American pistachio growers don't need to worry — at least, not yet: tariffs. Back in 1986, the U.S. pistachio industry successfully lobbied for a 300 percent tariff on Iranian pistachios. Thirty years later, that means that even though Iran can now legally sell the green nut to American retailers, consumers will have to pay three times as much for Iranian pistachios as they do for U.S.-grown ones. Zion says this tariff is in place because the Iranian government subsidizes the country's pistachio industry.

"It was making it a very unfair competition," Zion says. He says the tariff merely makes it a level playing field. "All people want, especially growers, is just a fair and level playing field. We fully expect [Iranian growers] to go ahead and challenge that at some point."

In Tulare County, Calif., Brian Blackwell manages more than 10,000 acres of nuts. Blackwell says if the subsidized Iranian pistachios were allowed into the U.S., it would hurt the growers whose farms he manages.

"If they're bringing in product for less than what we can grow it for, and we have to compete in the marketplace, at least here in the United States, then that means product is going to be sold at a lower price. And therefore the processors and marketers are going to give growers a lower price," says Blackwell.

For now he's safe, but Blackwell realizes this tariff may not be in place forever. And if it's ever lifted, that would mean it could become harder to sell his crop. Even so, he says he's not sure the industry would be hurt all that bad.

"This is a global market nowadays," says Blackwell. "So if Iran brought a million pounds of pistachios into the United States, that just means there's a million pounds out there somewhere that didn't get sold in China or Europe" — a million pounds that U.S. growers could sell to these places instead.

But Iranian pistachios could hit the American market sooner than expected. Richard Matoian with the American Pistachio Growers says Iranian farmers will likely try to prove they're not subsidized by their government as soon as this summer, in a meeting with the U.S. International Trade Commission.