Accessibility links
Caffeine For Sale: The Hidden Trade Of The World's Favorite Stimulant : The Salt Millions of people want caffeine removed from their coffee. Millions more want caffeine added to their soda. Little-known caffeine factories, scattered across the world, satisfy both desires. 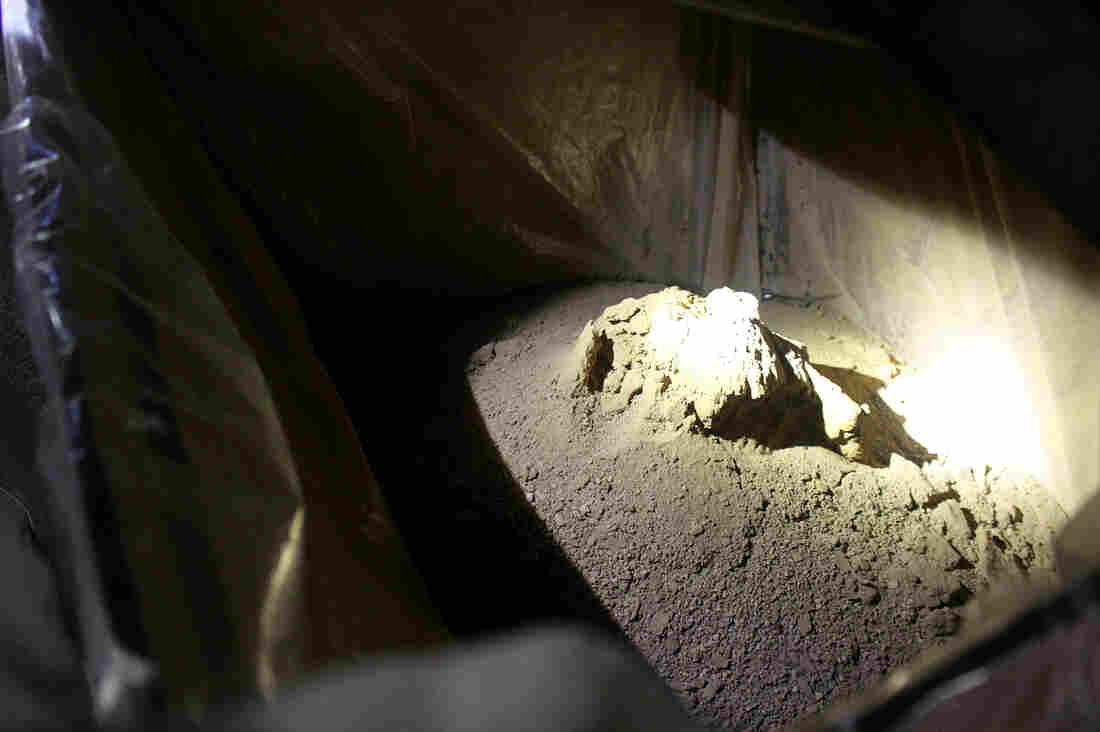 Crude caffeine, freshly extracted from coffee beans, has a pungent odor. After the impurities are removed, it will be white and odorless. Dan Charles/NPR hide caption 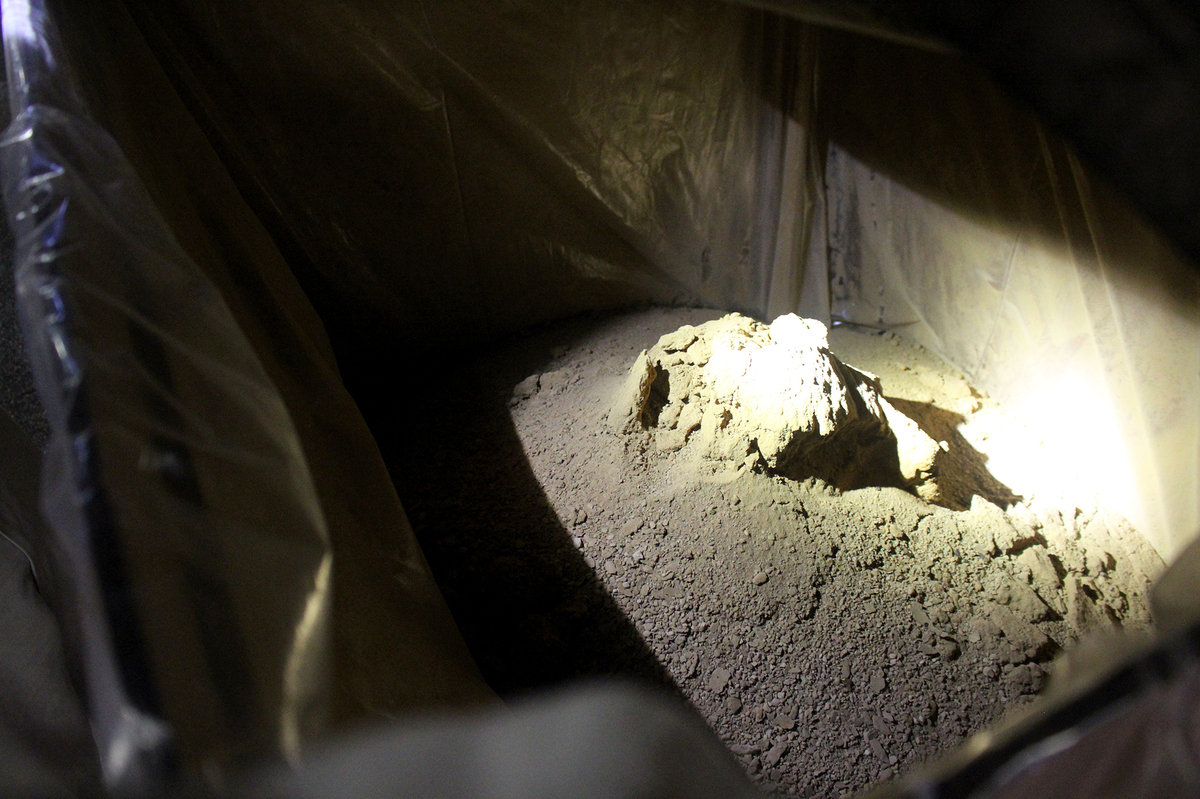 Crude caffeine, freshly extracted from coffee beans, has a pungent odor. After the impurities are removed, it will be white and odorless.

I came home from a trip the other day with a small plastic bag filled with 4 ounces of brown powder that, truth be told, made me a little nervous.

The powder had a strong odor that reminded me of badly burnt coffee, with perhaps a note of brown sugar.

I didn't dare open that bag. It contained crude caffeine, about 90 percent pure. That small bag held as much caffeine as 1,000 tall lattes from Starbucks, or 2,000 cans of Coke or Pepsi. It was enough to kill several people.

This was my first encounter with the substance that comes up so often in daily conversation. We speak of being "caffeinated" — sometimes too caffeinated. We consider the choice of caf versus decaf coffee, and whether there's entirely too much caffeine in energy drinks. Rarely, though, do any of us ever see caffeine, or consider where it comes from.

This particular caffeine, as it happens, was created on a quiet hillside somewhere in the tropics. Slowly and quietly, driven by the energy of sunlight, it formed inside coffee beans hanging on thousands of trees, most likely in Brazil or Vietnam.

Those beans were harvested, loaded on ships bound for the port of Houston, Texas, and ended up at a factory within sight of downtown Houston: Atlantic Coffee Solutions. It's owned by one of the world's largest coffee traders, ECOM Agroindustrial Corp., which is based in Switzerland.

This factory creates many different versions of coffee: whole roasted beans, packaged ground coffee and even instant coffee. All of these products are sold under other brands — including some of the top-selling coffee brands in the country. But a third of the beans — tens of millions of pounds each year — come to this plant to be separated from their caffeine. And the man in charge of that process, Boris Wheatley, takes me on a tour. 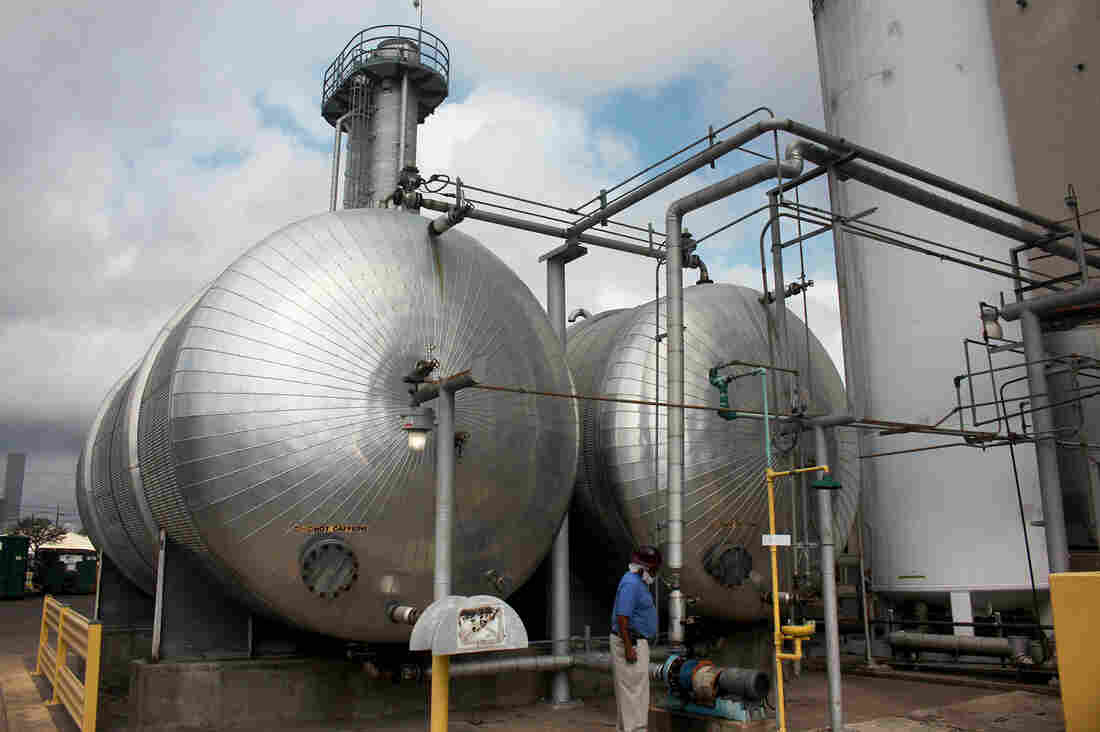 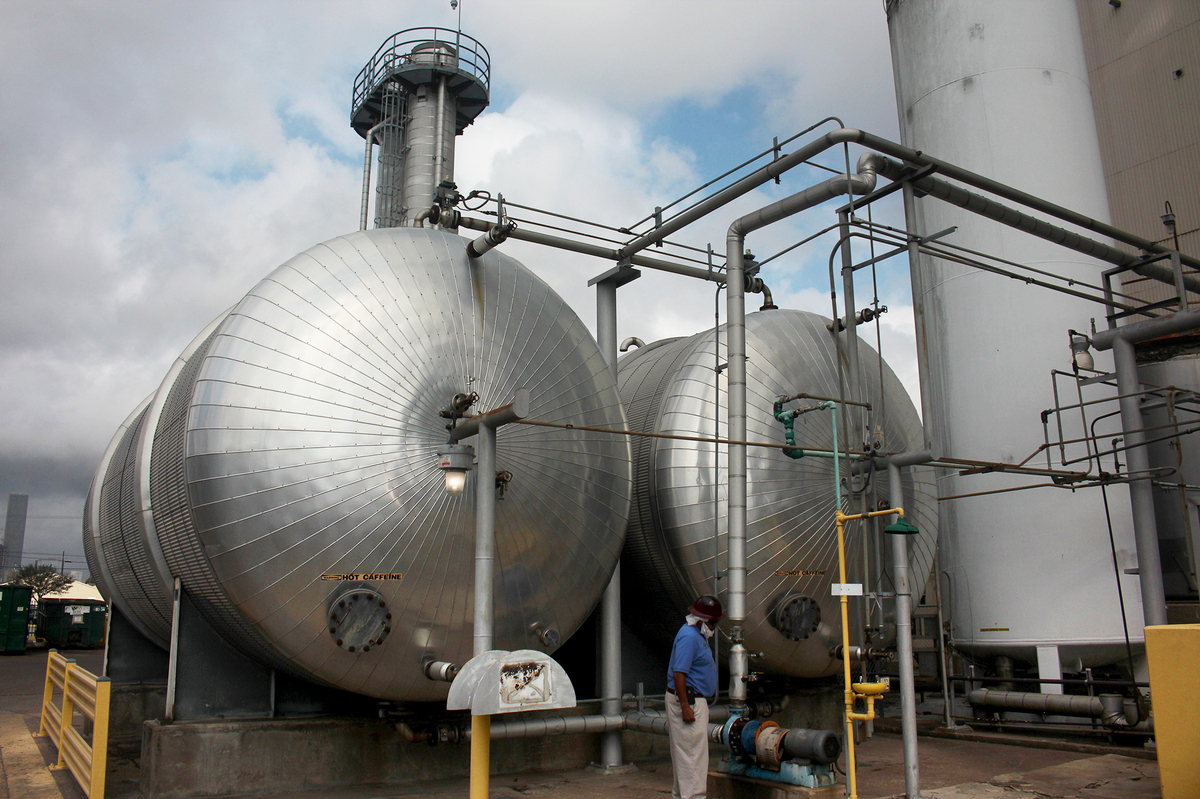 Boris Wheatley, a manager at Atlantic Coffee Solutions, inspects two tanks filled with a mixture of hot water and caffeine. The water will be evaporated to obtain crude caffeine powder.

He points high in the air toward a set of tall storage bins. "Those silos are green coffee silos," he shouts over the noise. "They hold approximately three trailers: approximately 120,000 pounds."

Hour by hour, batches of beans drop from those silos into a pair of stainless steel cylinders. They're marvels of engineering, 60 feet tall, with walls half-a-foot thick to withstand incredible pressure. Over 10 hours, the beans slowly work their way from top to bottom, while "supercritical" carbon dioxide, a special form of the chemical that forms under high pressure, is pumped through the bed of beans. "The supercritical CO2 penetrates the beans and pulls the caffeine out," Wheatley says.

The decaffeinated coffee beans go off for further processing, but that still leaves the task of recovering the valuable caffeine. A water spray washes the caffeine out of the carbon dioxide, and then the water is evaporated, leaving behind crude caffeine — that smelly brown powder. (That smell and color, by the way, are from coffee oils that left the beans along with the caffeine. Pure caffeine crystals are white and odorless.)

Boris Wheatley shows me where crude caffeine powder drops from the bottom of a metal drum into plastic-lined cardboard boxes, each one big enough to hold a person.

"We fill these cardboard totes with 1,200 pounds of caffeine, and they get shipped to customers," he says. It goes first to refiners who remove all the impurities, and then it goes to beverage companies — like Coca Cola or Pepsi — that mix caffeine into their products. 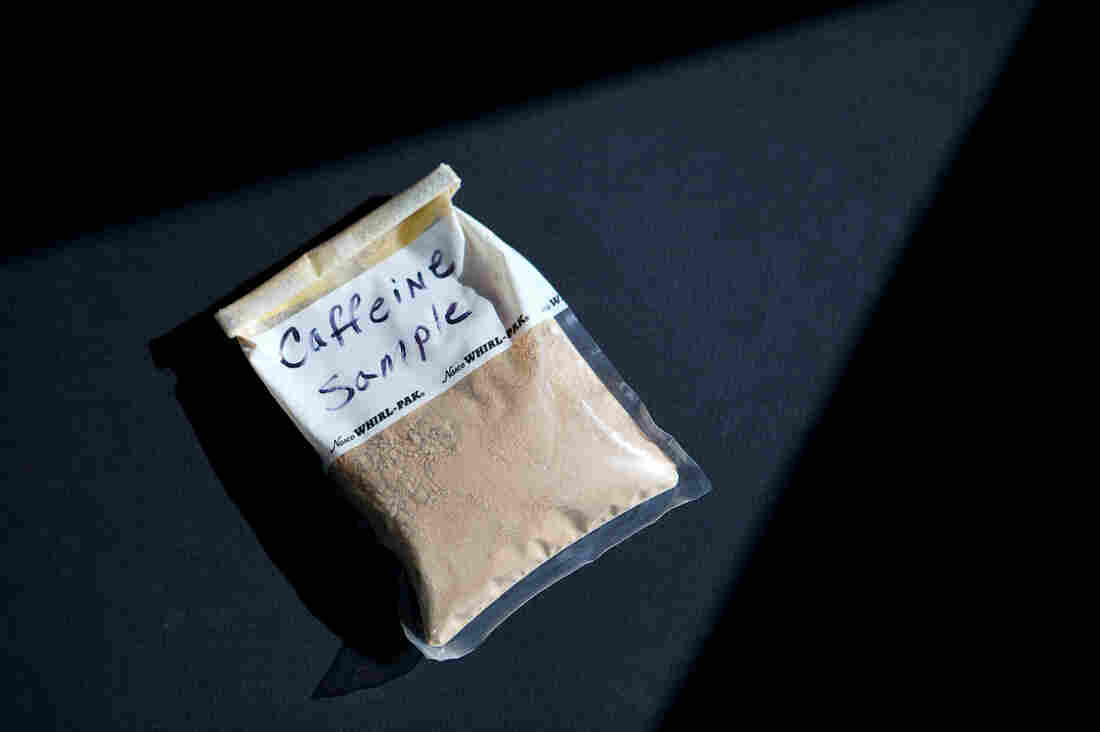 This bag contains about as much caffeine as a thousand cups of coffee. Morgan McCloy/NPR hide caption 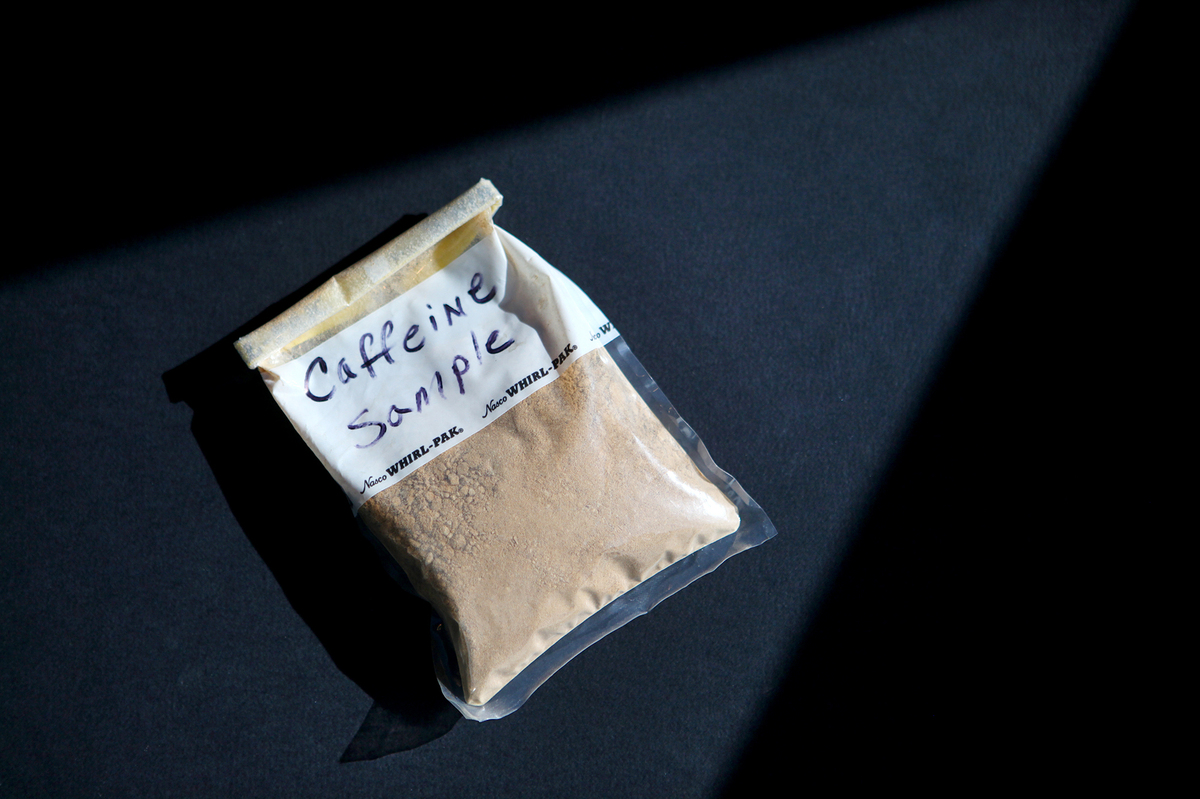 This bag contains about as much caffeine as a thousand cups of coffee.

Other decaffeination companies, in other parts of the world, use slightly different processes to do this job. A factory in British Columbia, Canada, uses water to capture the caffeine. Others, in Europe, use solvents such as ethyl acetate.

Germany, where caffeine was first removed from coffee beans, has several decaffeination plants, including the world's largest. In fact, more than half of the decaf coffee sold in America first makes the long voyage from the tropics to Germany to get its caffeine removed before heading to the U.S.

If you're a beverage maker looking for caffeine, though, there's also another source: big factories in China.

Those factories accomplish, with lots of noise, heat and pressure, the same thing that a coffee tree does very quietly. They arrange atoms of some of the most common elements in nature — carbon, hydrogen, oxygen and nitrogen — into the particular structure of caffeine.

Most of the caffeine that's used in the beverage industry is this synthetic version.

None of the companies that sell caffeine, whether it's the natural caffeine, extracted from coffee, or the synthetic version, are well-known. They stand in the background, hidden behind well-known brands like Red Bull and Rockstar, not to mention Coca Cola and Pepsi.

When Wheatley goes into a supermarket and sees those products on the shelf, he does feel a touch of pride, knowing that he might have had a hand in making them. "I do drink some of the energy drinks," he says with a smile. "And I do wonder sometimes if the caffeine from our plant ended up in that product. I do think about that sometimes."

But what I kept thinking, as I looked at that bag of caffeine, was that it brings the world together. This powder links a forest of trees in Vietnam or Brazil, and the people who harvested them, with American truck drivers and nurses and college students trying to fight the urge to sleep. It's a global web of caffeine.