Accessibility links
Herring Headache: The Big Obstacles To Eating Small Fish In California : The Salt Chefs and environmentalists have been promoting the benefits of eating fish lower down the food chain. But San Francisco's herring fishery shows some of the challenges to spreading that message. 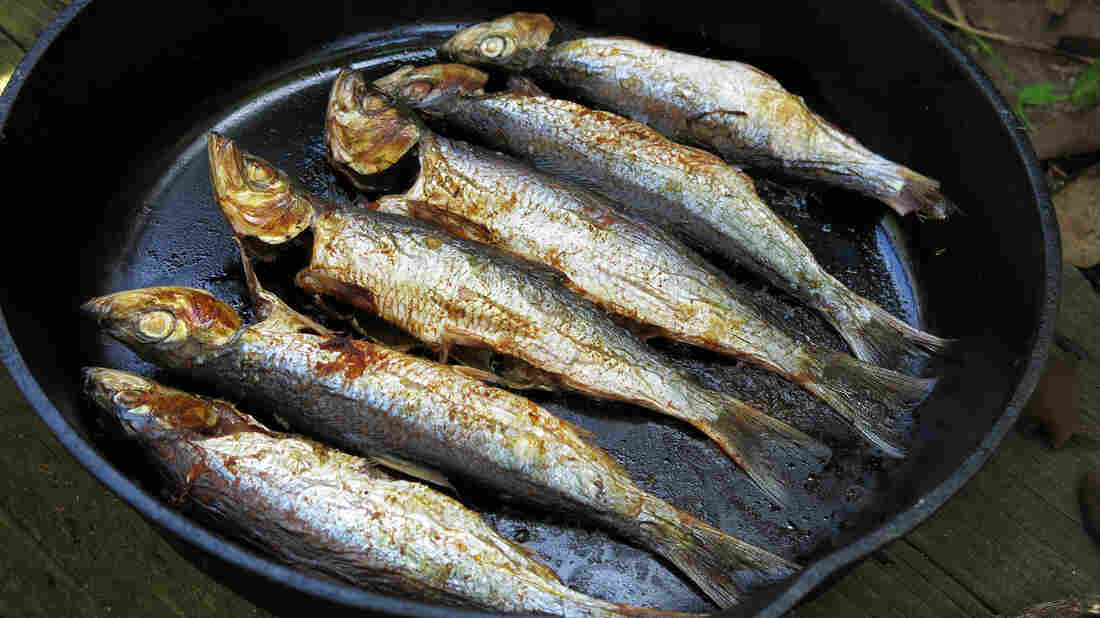 Herring are delicious, with flaky, mild meat and oil that sizzles on their skin when grilled over a flame. Chefs and ocean advocates have been promoting the environmental and health benefits of eating small fish like this. But the case of the San Francisco Bay's herring shows some of the obstacles to spreading that message. Alastair Bland for NPR hide caption 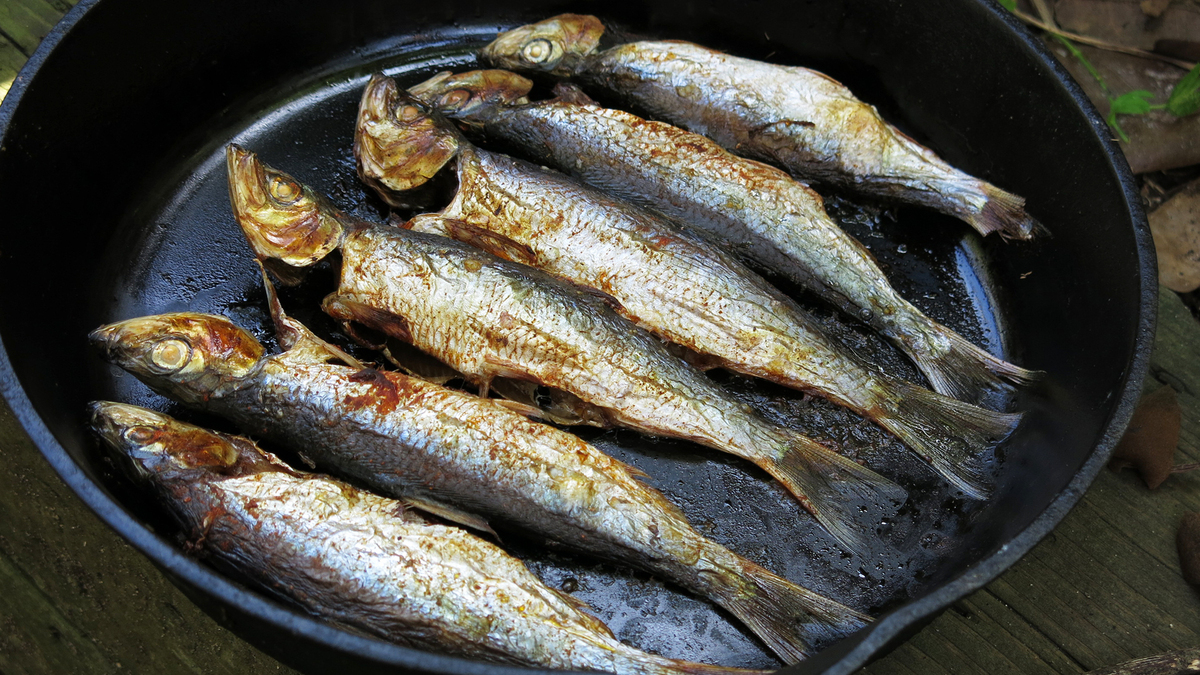 Herring are delicious, with flaky, mild meat and oil that sizzles on their skin when grilled over a flame. Chefs and ocean advocates have been promoting the environmental and health benefits of eating small fish like this. But the case of the San Francisco Bay's herring shows some of the obstacles to spreading that message.

Every winter, a small fleet of commercial fishing boats sets gillnets in the San Francisco Bay. Their target: Pacific herring, which enter the estuary in huge numbers to spawn and are easily caught by the millions. The fishermen fill their holds with herring just yards from the waterfront of downtown San Francisco, where many restaurants serve fresh, locally caught seafood.

But they rarely serve herring. Rather, nearly all the herring caught by commercial fishermen in the bay are ultimately fed to animals, including farm-reared fish. The most valuable part of the herring is the females' roe, which is extracted, cured and eaten in Japan as the delicacy kazunoko.

Now, a few sustainable seafood proponents and commercial fishermen are striving to change this – to divert the stream of herring that enters obscure export markets and turn this little fish into a local culinary star.

Success, however, has been limited.

"We haven't done nearly a good enough job yet of promoting herring as a local, sustainable food source," says Geoff Shester, California campaign director for the marine protection group Oceana. "We live in one of the most progressive, conservation-oriented cities in the country, and virtually no one is utilizing this healthy, sustainable resource that's right in their backyard."

Herring are delicious, with flaky, mild meat and oil that sizzles on their skin when grilled over a flame. The fish may also be pickled, smoked and fried.

But Americans generally aren't interested in eating small, oily fish with numerous bones – even though, in the case of herring, their oil content is part of what makes them tasty and healthy, and many of their bones are small enough that they can be eaten.

"The mainstream American palate for seafood is really disappointing," says commercial fisherman Kirk Lombard, who has a commercially registered kayak and sells hook-and-line-caught fish through his company, Sea Forager. "People want to eat fish that doesn't have any flavor, and they don't want to deal with bones."

Chefs and seafood advocates around the world are trying to change this. Last March, 20 star chefs gathered in Spain to discuss the environmental virtues of eating what many still call "bait fish" and ways to promote these species – including anchovies, sardines, mackerel and herring – as culinary attractions.

But the case of California's herring exemplifies some of the challenges of spreading this message. For one thing, many seafood fans here – and chefs, for that matter – don't know much about herring, says Kenny Belov, owner of Fish Restaurant in Sausalito, Calif.

Belov has been trying to get people interested in herring for more than a decade, mainly by featuring it at his restaurant. He also sells herring through his seafood company, TwoXSea, and has been a sponsor of the annual Sausalito Herring Festival, which just saw its fourth go-around in January. While a few dozen other Bay Area restaurants also serve herring, Belov guesses more than 99 percent of the San Francisco Bay herring catch is processed for roe.

This processing happens in British Columbia, home to a large commercial herring industry of its own. Whereas the San Francisco Bay fleet captures, at most, 2,000 or 3,000 tons of herring in a season – and often much less – the Canadian fishery lands 15,000 to 30,000 tons a season. The fish processed for their roe are split open and the large, finger-sized egg sacks of the females extracted and reserved for curing. 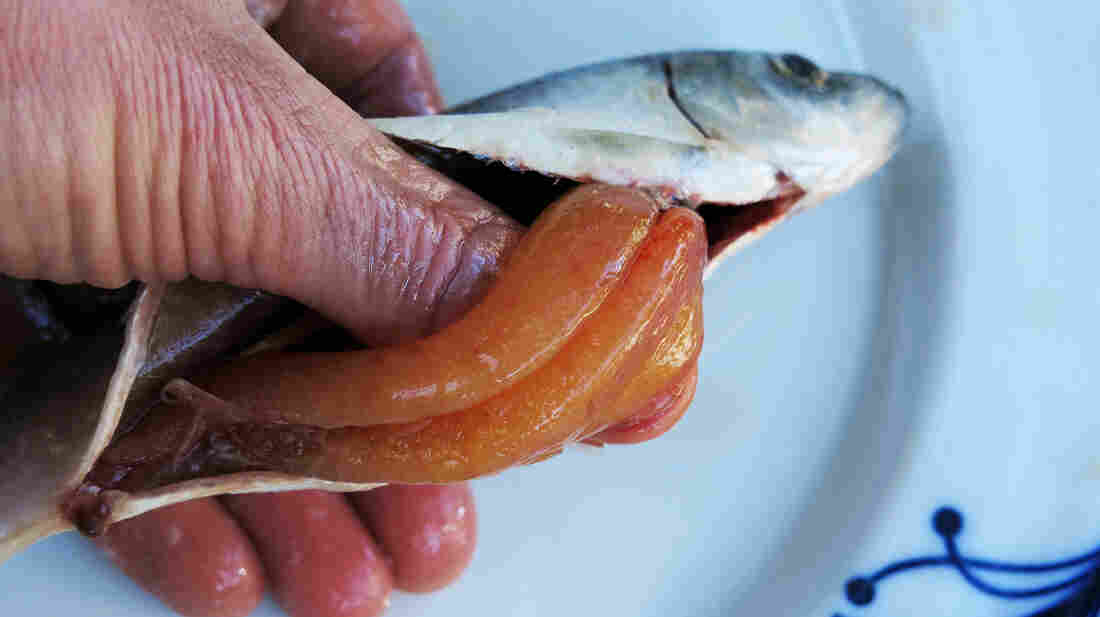 For commercial fishermen in the San Francisco Bay, the most valuable part of the herring is the females' roe, which is extracted, cured and eaten in Japan as the delicacy kazunoko. Alastair Bland for NPR hide caption

At the Canadian Fishing Company, based in Vancouver, all carcasses of herring processed for roe are reduced into fishmeal and sold to farms and aquaculture facilities, including coastal salmon-rearing operations, according to Rob Morley, the company's vice-president of production and corporate development.

Feeding these fish to humans would be a better use of all that protein, argues Geoff Shester of Oceana. He says small schooling fish like herring are especially healthy to eat, since they contain low mercury levels compared to predatory species like swordfish, shark and tuna. Small forage fish species are also lower on the food chain, which means it takes less energy for the ocean to produce them, Shester says.

Feeding these small fish to bigger, farmed fish, like salmon or tuna, is relatively wasteful, he says.

"You're actually helping save herring by eating them directly, because if you eat a pound of farmed salmon, it took four pounds of herring to create that salmon," Shester says. "So, you could just eat the one pound of herring directly."

Lombard has delivered a TEDx talk about the importance of eating smaller fishes lower on the food chain and says it makes every bit of sense to eat herring.

"The marine food web is based on eating little fish," he tells me. "They're designed by nature to come back, to resist predation and overfishing. They're the rabbits, the field mice, of the sea."

It's not just consumer tastes that have impeded efforts to develop a Bay Area market for whole, fresh herring: There are also regulatory hurdles. As things are now, only commercial fishermen with boats and gillnets may sell herring. For these fishermen, who catch herring by the ton, the most profitable way to move the fish onshore and return to the water to catch more is to sell the herring into the roe market, which relies on huge quantities of fish.

The handlers who buy seafood at San Francisco's Fisherman's Wharf, says Lombard, are happy to sell handfuls to restaurants and retailers now and then. But the herring, he says, are often in bad shape, and not particularly appetizing for chef shoppers.

"They're choked, beaten, sometimes even walked on, stacked 20 tons deep, and then vacuumed into a giant plastic bin," he says.

Several years ago, Lombard attempted to create a small-scale, artisanal fishery specifically to provide herring to local restaurants and retailers. He proposed that state fishery regulators adjust the law to allow fishermen using hand-thrown cast nets to catch small quantities of herring to sell directly to markets and restaurants. The proposal, says Lombard, was quickly rejected.

Some locals who want herring catch the fish themselves, mainly with small cast nets thrown from the shore. Mike Chin, a Bay Area resident and recreational fisherman, catches several bucketfuls – about 100 pounds – of herring by this method each winter. At home, he smokes, pickles and pan fries his catch. He cooks many whole, and the backbones, pushed to the side of the plate during dinner, can be fried later for a crunchy, delicious snack. The innards and gills are used as garden fertilizer. Virtually nothing is wasted.

"I really think it's great to get the word out about this, that you don't need a big piece of white fillet," Chin says. "You can eat these small fish, and the bones won't kill you."