Accessibility links
Action On A National GMO Labeling Measure Heats Up On Capitol Hill : The Salt Congress is scrambling to piece together a national standard for labeling foods that contain genetically modified ingredients before July 1. That's when Vermont's mandatory labeling law kicks in. 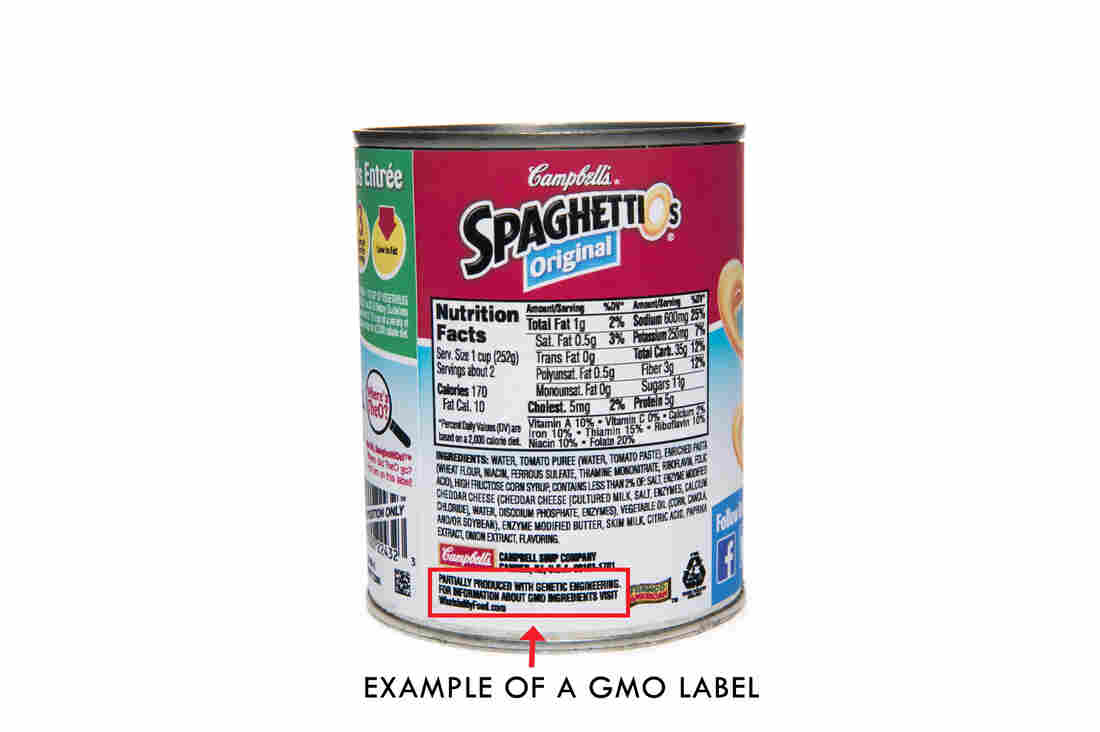 A mockup of a possible GMO label on a can of Campbell's Spaghetti-Os, with these words: "Partially produced with genetic engineering." Lawmakers are scrambling to piece together a national GMO labeling standard before July 1. Courtesy of Campbell Soup Company hide caption 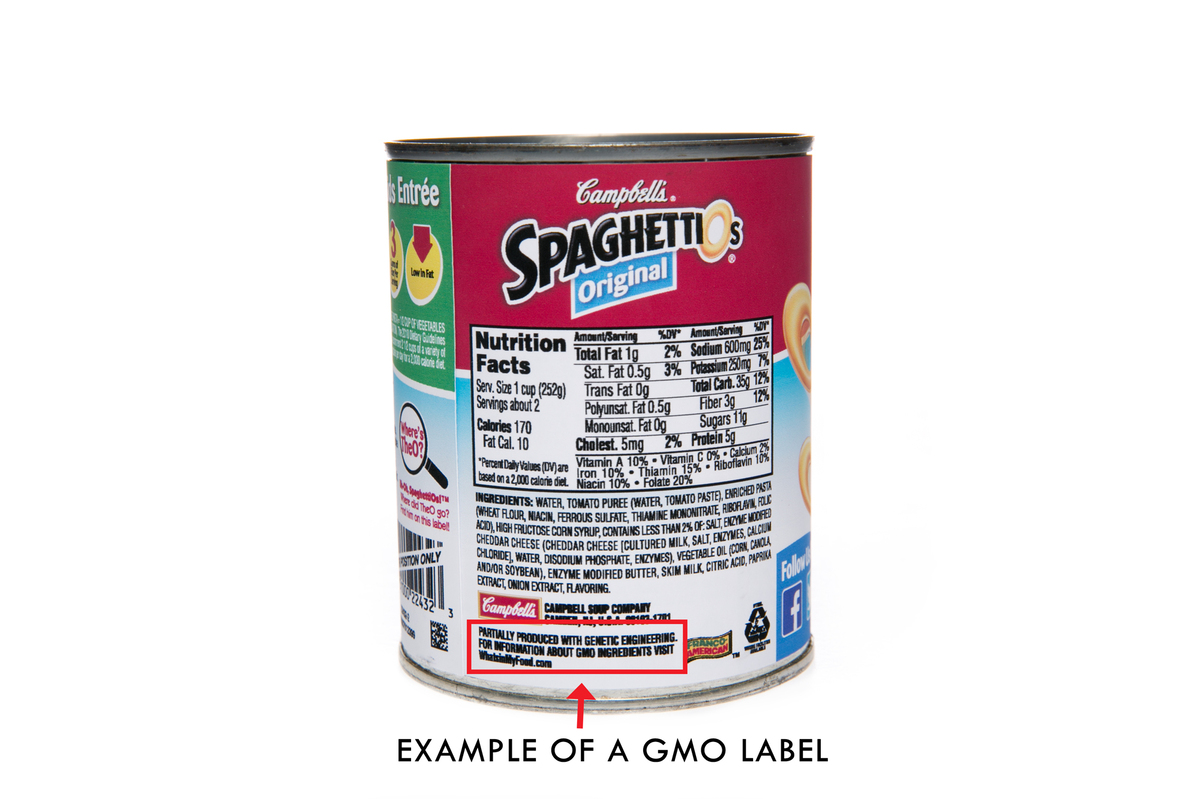 A mockup of a possible GMO label on a can of Campbell's Spaghetti-Os, with these words: "Partially produced with genetic engineering." Lawmakers are scrambling to piece together a national GMO labeling standard before July 1.

With a July 1 deadline looming, Congress was scrambling this week to quickly set a national standard for labeling food products that contain genetically modified ingredients.

While most lawmakers mentioned polls showing the majority of Americans support GMO labeling, they differed on whether a national system should be voluntary or mandatory. A measure passed in the U.S. House last summer sets voluntary labeling standards.

The first mandatory GMO labeling law is set to go into effect in Vermont in July – Kansas Republican Sen. Pat Roberts has called it a "wrecking ball" headed the food industry's way. Roberts, the chair of the Senate Agriculture, Nutrition and Forestry Committee, won first-round approval on Tuesday for his own GMO labeling bill – which would preempt Vermont's law.

The labeling issue has created a conundrum for lawmakers. They must weigh the competing interests of activists who want more transparency in the food system, industrial agriculture, and large food companies, while also maneuvering the always-tricky issue of state rights. Pro-GMO forces worry that such labels would inherently imply that something is wrong with these foods.

Given the complicated dynamics involved, Sen. Heidi Heitkamp, a North Dakota Democrat, chastised her fellow committee members for passing the Roberts bill "in a pretty cavalier way." Although she, too, voted for the measure, Heitkamp worried that the committee had essentially voted to "preempt a state law." As she put it, lawmakers were telling Americans "we know better than they do" about their right to know what's in their food.

"That's a tough sell," Heitkamp told her colleagues. "It's a tough sell in a political environment where people think that Washington, D.C., doesn't listen to them."

Roberts' bill now moves to the Senate floor, but he doesn't believe he has the 60 votes needed to get it passed, so a compromise will have to be crafted.

Earlier this year, U.S. Agriculture Secretary Tom Vilsack oversaw negotiations on labeling rules between organic companies and conventional food manufacturers. But those talks broke down, and Vilsack said the issue is now in the hands of Congress.

Meanwhile, a competing labeling measure popped up this week: Democratic Sen. Jeff Merkley of Oregon introduced a bill that would make it mandatory for companies to disclose GMO ingredients as part of nutrition facts labels.

Campbell Soup Co., which announced in January that it would begin disclosing GMO ingredients on its products, applauded Merkley's bill via Twitter.

A fourth potential plan, a possible compromise from Sen. Joe Donnelly, an Indiana Democrat, was offered as an amendment during the ag committee meeting this week. It would create a voluntary disclosure program, which could become mandatory in three years if less than 85 percent of companies were listing GMO ingredients.

Donnelly characterized his plan as setting "ambitious goals" for companies to be more transparent.

"Instead of pitting conventional farmers versus organic [farmers], or concerned parents versus biotech companies, we need to quickly enact legislation that ensures consumers can get the information they want, without sticking misleading labels on every food product," he told the committee.

This issue wasn't so controversial in the House, where a voluntary labeling measure — sponsored by Kansas Republican Rep. Mike Pompeo — passed easily last July on a bipartisan vote of 275-150.

That both bills seeking a voluntary labeling system were sponsored by Republicans based in Midwest farm country shouldn't come as a surprise. The majority of crops grown in the U.S. have been genetically engineered. According to the USDA, in 2015, 94 percent of soybean acreage and 92 percent of corn acreage are GE seeds.

And most of the large farm groups support Roberts' bill, including the National Corn Growers and the American Soybean Association.

On the other side of the issue are groups like Food & Water Watch, an environmental group, and an organization called Just Label It. They call Roberts' and Pompeo's bills the "Deny Americans the Right to Know" or DARK Act.