Accessibility links
The Forgotten History Of Fat Men's Clubs : The Salt These clubs of the late 19th and early 20th centuries were spectacular celebrations of wealth and girth. At their gatherings, networking and eating — a lot of it – were on the menu. 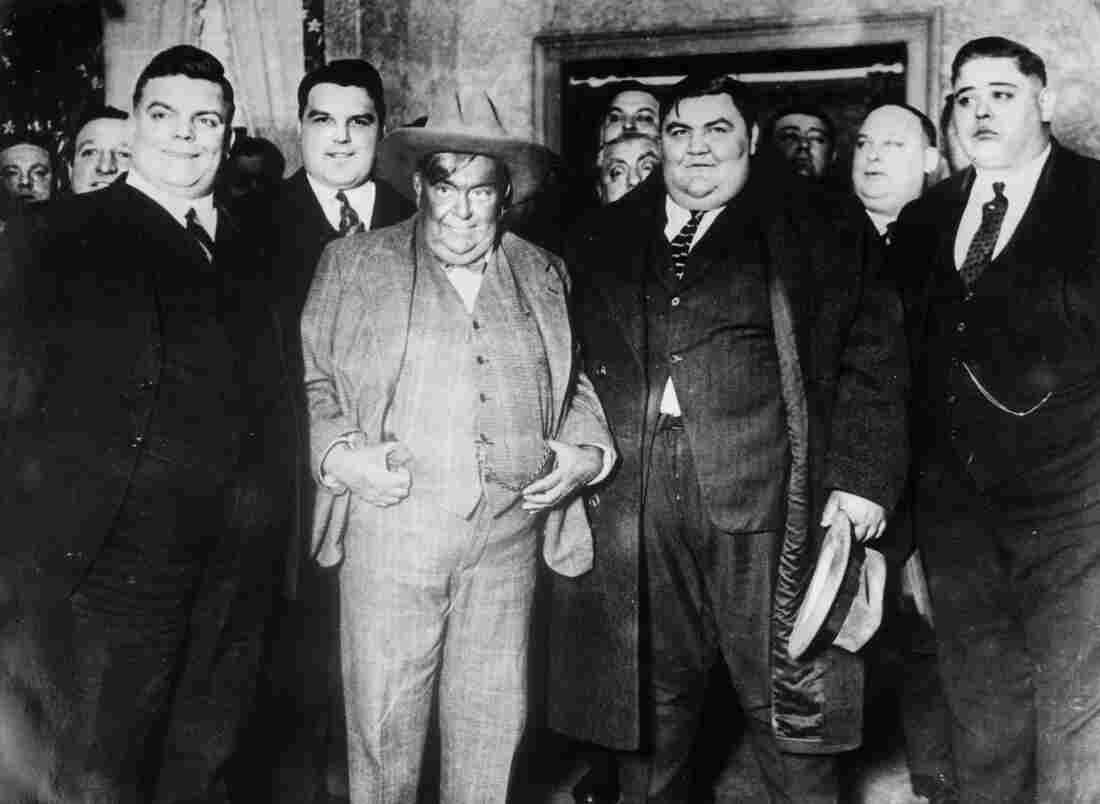 Members of the Fat Men's Club of New York gather at a meeting, circa 1930. General Photographic Agency/Getty Images hide caption 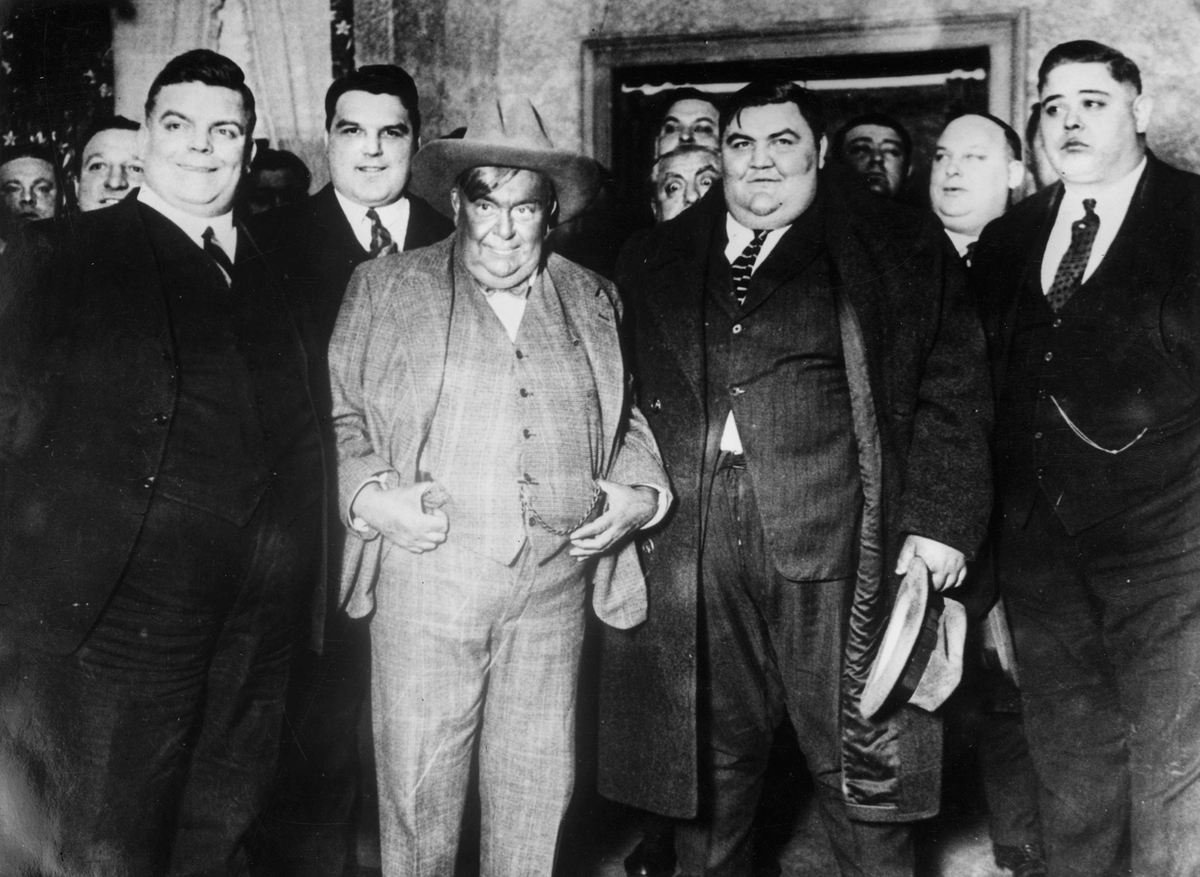 Members of the Fat Men's Club of New York gather at a meeting, circa 1930.

In 1903, in a cheery local tavern tucked away in Wells River, Vt., one of America's most successful fat men's clubs was launched.

"We're fat and we're making the most of it!" was their mantra. "I've got to be good-natured; I can't fight and I can't run," was their motto. Members had to be at least 200 pounds, pay a $1 fee to enter and learn a secret handshake and password. Twice a year, members gathered, with meetings announced in advance to allow the men to stuff up in order to meet the minimum weight requirement. A 1904 Boston Globe article described the biannual meetings colorfully:

"This village is full of bulbous and overhanging abdomens and double chins tonight, for the New England Fat Men's Club is in session at Hale's Tavern. The natives, who are mostly bony and angular, have stared with envy at the portly forms and rubicund faces which have arrived on every train."

The fat men's clubs of the late 19th and early 20th centuries were spectacular celebrations of the wealth and chubbiness of a bygone era. At once sociological curiosity and anthropological artifact, these clubs were a vestige of perhaps the last time society found corpulence to be worthy of celebration.

Weigh-ins were a competitive event. A New York Times article from 1885 describes the crestfallen reaction of a member of a Connecticut fat men's club upon stepping on the scale. "I must weigh over 300 pounds now," George Kapp boasted. Alas, he came in at a disappointing 243. As the Times reported, "His friends thought he shrank at least 20 pounds more from grief before evening."

Daryl Leeworthy, a historian at the U.K.'s Swansea University, says that fat men's clubs weren't just an East Coast phenomenon. Nevada, Utah and Tennessee boasted versions as well. And he says the clubs weren't just venues to celebrate the joys of eating without concern and brag about one's girth. They were, essentially, networking events. Memphis' fat men's baseball club had a reception committee replete with judges, ministers and a rabbi, he says. Populist Democrat William Jennings Bryan traveled to a Fat Men's Club in Concord, Mass., to drum up support for one of his presidential runs, Leeworthy says.

What did one do at a fat men's club gathering? Well, eat, of course — a lot. At its peak, the New England's Fat Men's Club had 10,000 members, according to writer Polly Tafrate's brief history of the club for Upper Valley Life. The men would cram huge breakfasts into their bellies, then stumble outside and work up a sweat in a friendly Olympics-style competition showcasing strength and virility: leap-frog contests, broad jumps and races, Tafrate writes.

The exertion also served to jump-start appetite for the indulgent dinner spread that awaited members at sundown. It was a ridiculous amount of food, Tafrate writes:

Even at the height of chubby chic, being grossly, morbidly obese was never celebrated as a sign of beauty and wealth, explains Peter Stearns, a professor of history at George Mason University and author of Fat History. He notes that, while having wide hips and some girth was considered attractive for a woman — indicating her prosperity and fertility -- "fat ladies" were often mocked and included as a freak show element in traveling circuses. Fat men weren't similarly lampooned, though they, too, faced ridicule: Tafrate's article mentions a child exclaiming: "Gee, look at that stomach! Let's get under it and keep out of the rain!"

However, female versions of fat men's clubs did exist, according to Leeworthy. He points to a Hazleton, Pa., venue whose female members weighed 236 pounds on average. But Leeworthy says the opposite — fat women's reduction clubs — were far more common.

"One of these existed in Chicago just after the First World War and aimed at promoting responsible diet among the city's overweight women," Leeworthy told us in an email. "Even in the 19th century, diet pills (sometimes known as 'obesity pills') were advertised. ... In a world where power and status mattered a great deal, this was yet another reminder that women tended to have neither."

Fat men's clubs were not a uniquely American phenomenon, though they were more popular here than elsewhere, Leeworthy adds. There was a French version — Les Cents Kilos, or "The Hundred Kilos" — formed in 1897 that didn't quite take off. The Serbian capital of Belgrade created a version in 1932. He says Britain's version of the club had a twist: Members who didn't meet the weight requirement had to pay a fine, which was donated to charity.

Throughout history, there have been wavering ideas about ideal body type. As Leeworthy notes: "Traditionally, being fat was closely associated with wealth and status. For most of our ancestors, the poorer they were, the less food they had to eat, and the thinner and shorter they tended to be. And power and wealth and status are attractive characteristics: If a person's body is their temple, then being the size of a cathedral told others that you were someone of significance."

But as the Industrial Revolution began to change the way we worked and ate, views about fat and health also began to shift. "An increasing number of people had jobs that weren't physically demanding," Stearns notes. And the advent of modern agricultural methods made food supply more reliable. "For the bulk of the middle class, the pendulum began to swing," he says. In other words, people were expending less energy and were more confident about getting a meal.

In some ways, fat men's clubs were a last hurrah for celebrations of corpulence. As Stearns writes in Fat History, "In general, in a trend that began around 1910, doctors and insurance actuaries began to push preferability of underweight to overweight, in terms of health and longevity."

Being fat was no longer so feted. Membership at fat men's clubs began to dwindle, as did waistlines. For instance, at the last meeting of the New England Fat Men's Club, in 1924, only 38 members showed up, none of whom met the 200-pound mark, Tafrate reports.

While it's unlikely that fat men's clubs will ever catch on again, current trends toward body acceptance might yet nudge us toward that Goldilocks level of body image: not too fat, not too thin, just plain healthy.

Tanya Basu is a writer based in Brooklyn. She's on Twitter: @mstanyabasu.