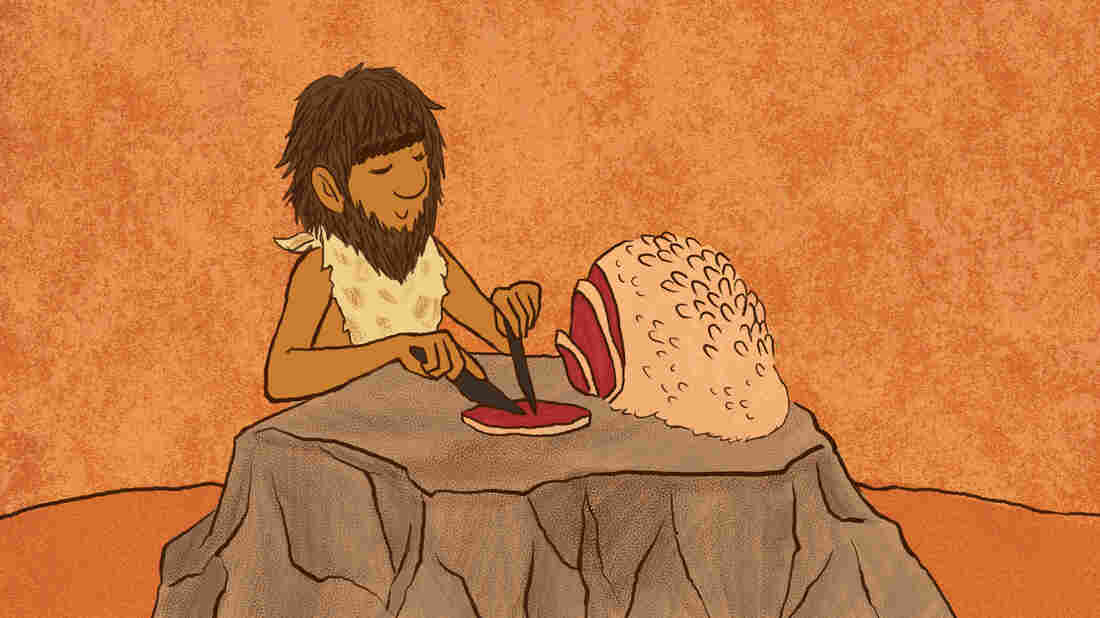 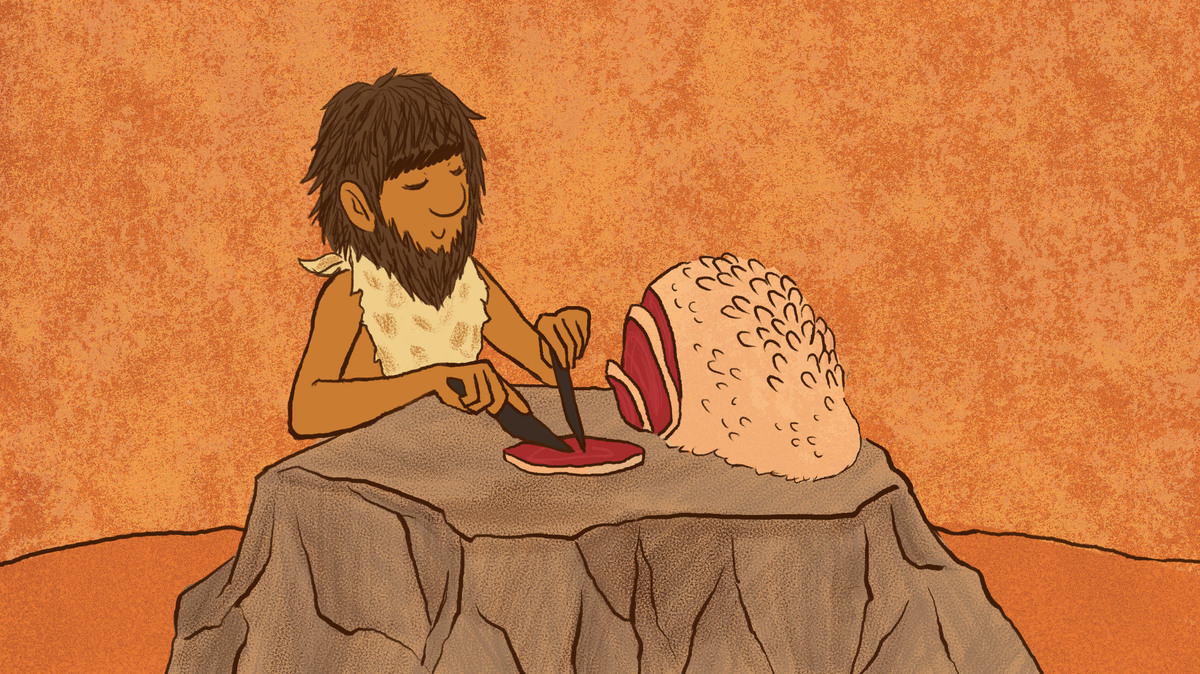 Miss Manners and skilled prep cooks should be pleased: Our early human ancestors likely mastered the art of chopping and slicing more than 2 million years ago. Not only did this yield daintier pieces of meat and vegetables that were much easier to digest raw, with less chewing — it also helped us along the road to becoming modern humans, researchers reported Wednesday.

And our ancestors picked up these skills at least 1.5 million years before cooking took off as a common way to prepare food, the researchers say.

Chewing, it turns out, takes a lot of time and energy, say Katherine Zink and Daniel Lieberman, evolutionary biologists at Harvard University. They recently set about measuring precisely how much effort is required to chew raw food, and to what degree simple stone tools might have eased the toil.

"Every time I go out to dinner, I watch people chew," Lieberman tells us. "And sometimes, I actually count how many times they chew." 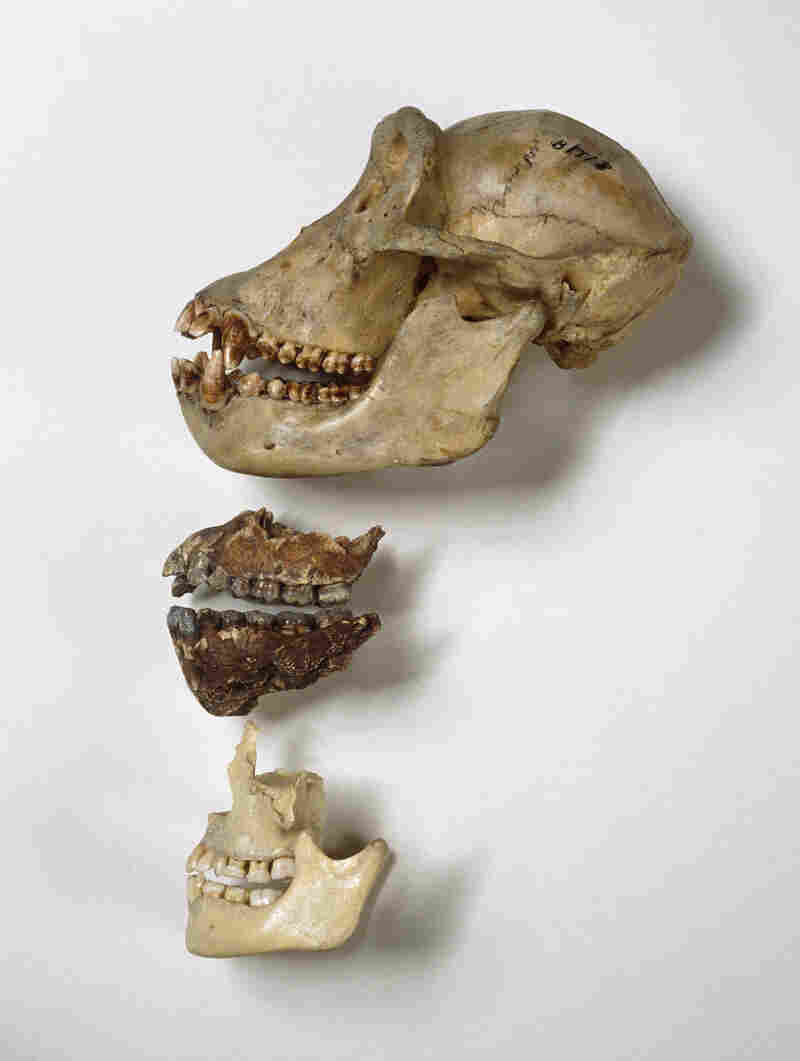 It's not just a hobby. Lieberman's interest gets to some basic questions of how humans evolved.

Scientists have long known that Homo erectus, an ancestor of modern humans who lived about 2 million years ago, had already evolved to have a bigger body and brain than earlier hominins, and would have needed much more daily energy to survive. But the jaw and teeth of H. erectus were much like ours today — significantly smaller and less powerful than those of Australopithecus afarensis, or other hominins of earlier epochs.

A diet that included cooked meat would have provided that ready energy without the need for sharp canines and big grinders. But the research evidence is pretty clear that cooking didn't become common until about 500,000 years ago, Lieberman says. So, how did H. erectus get the needed calories?

To test a long-held hypothesis that simple food processing might be the answer, Zink and Lieberman invited some Harvard colleagues to what Zink calls "a lab café," and served them small portions of carrots, beets, jewel yams and goat meat. The food was served variously as roasted or raw; sliced, pounded or left in hunks.

"If I were to give you raw goat," Lieberman says, "you'd chew, and nothing would happen." Like a lot of wild game, goat meat tends to be stringy, he says. Chewing a big piece makes it more elastic, but it doesn't readily break into pieces.

"But if you cut goat into smaller pieces," he says, "your ability to chew it would improved dramatically."

All the volunteers (14 for the vegetables and just 10 for the goat meat) wore a number of small sensors pasted to their faces, to detect and count contractions of various muscle fibers as they chewed the bite of food to the point of swallowing. The scientists then translated those contractions into a measure of muscular effort, and also checked to see how well the food was broken up.

Their results, published in the journal Nature, suggest that when eating a diet made up of one-third meat, if early humans pounded the vegetables before eating them, and sliced the meat, they would need to chew 17 percent less often and 26 percent less forcefully than if they started with larger slabs of the food. Every little flex of the jaw and grinding of the teeth adds up: Over the course of a year, Lieberman says, simply having a sharp stone to slice meat would reduce the number of "chews" needed by 2.5 million.

"I think it's amazing," he says, "to think that the simple stone tool could have a massive effect on how effectively we chew a piece of meat."

It's possible, he and Zink think, that the benefits of meat-eating and food processing favored the transition to smaller teeth and jaws.

But it seems more likely, they write in their study, that tool use and meat-eating simply reduced the evolutionary pressure to have big, powerful jaws and sharp teeth, "thus permitting selection to decrease facial and dental size for other functions, such as speech production, locomotion, thermoregulation, or, perhaps even changes in the size and shape of the brain."

Several years ago, as part of our Meat Week coverage, we put together a tongue-in-cheek cookbook — based on archaeological digs and actual historical texts — tracing humanity's changing relationship with meat. Check it out below or download the PDF.