Accessibility links
These 27 Solutions Could Help The U.S. Slash Food Waste : The Salt The U.S. wastes 133 billion pounds of food annually. Cutting that by 50 percent by 2020 is going to take a serious action plan. A new data-driven report ranks approaches that could get the job done. 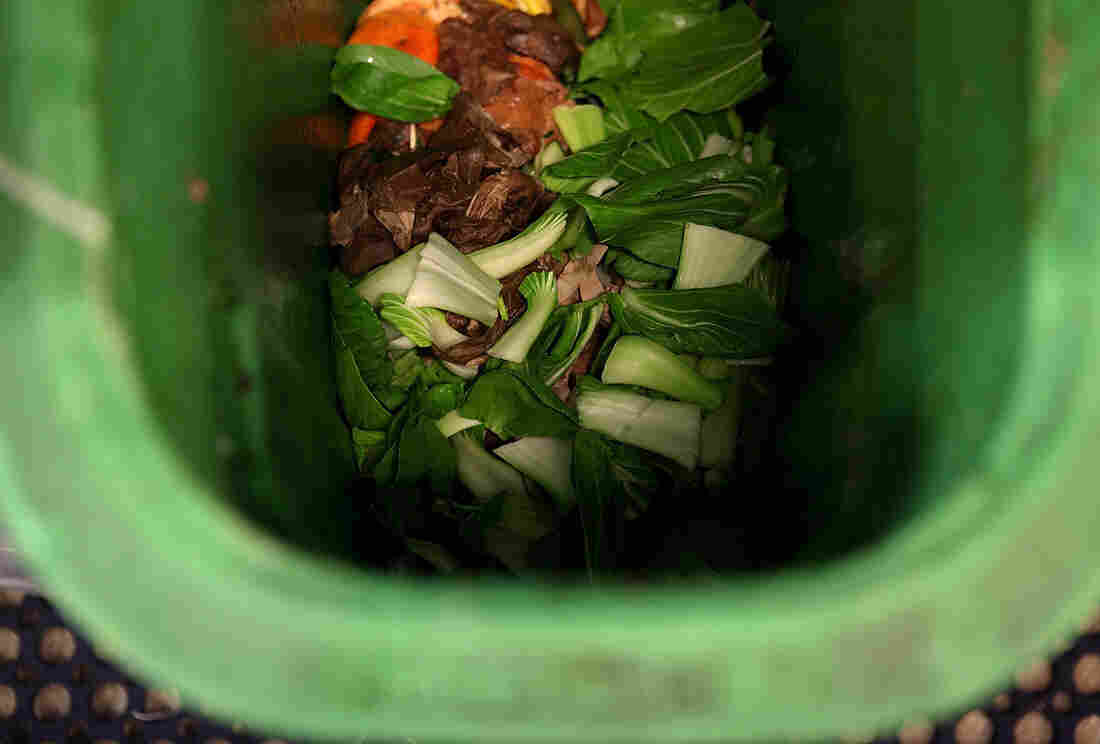 Food scraps are seen in a compost bin at a San Francisco restaurant. A new report ranks centralized composting as a top strategy for keeping food waste out of landfills, where it emits methane, a powerful greenhouse gas. Justin Sullivan/Getty Images hide caption 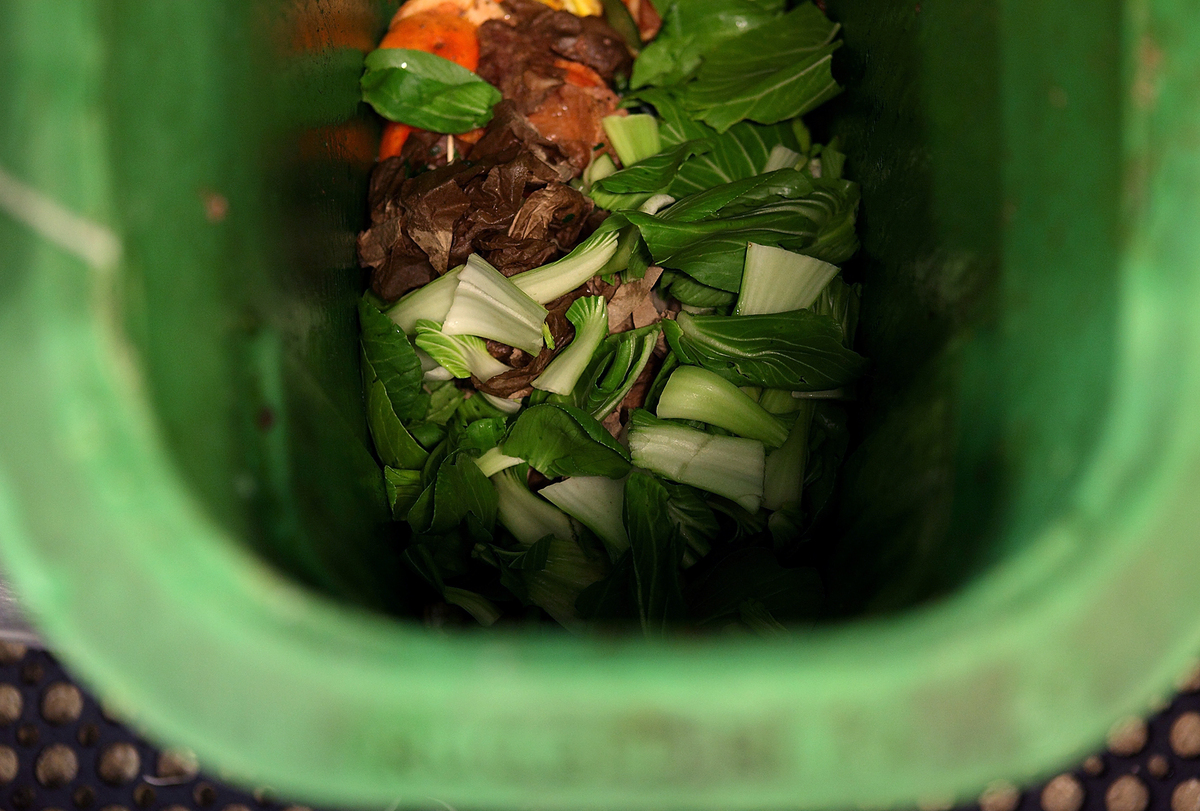 Food scraps are seen in a compost bin at a San Francisco restaurant. A new report ranks centralized composting as a top strategy for keeping food waste out of landfills, where it emits methane, a powerful greenhouse gas.

By now, you probably know that Americans waste a lot of food.

Each year, an estimated 133 billion pounds of food that farmers grow never makes it to our plates. That's enough to fill 44 skyscrapers. And tons of it ends up in landfills, where it emits methane, a greenhouse gas.

The Obama administration has set a goal of reducing food waste by 50 percent by 2030. And, as we've reported, there are lots of efforts underway — from sales of ugly produce to the EPA's Food Recovery Challenge, aimed at diverting excess food from landfills to hungry mouths and other uses, like composting. Even religious groups are joining the battle against food waste.

But, what's been lacking is a comprehensive plan to identify the most cost-effective approaches.

Now, a new data-driven road map to reduce food waste aims to fill the void. The road map is the creation of a big group of collaborators — including food businesses, environmentalists, anti-hunger organizations, policymakers and investors.

"Reducing food waste is one of the most tangible ways we can all help contribute to a healthier planet," says Sarah Vared, interim director of ReFED, the group that created the road map. "It [the road map] identifies actions that can be taken today," says Vared. 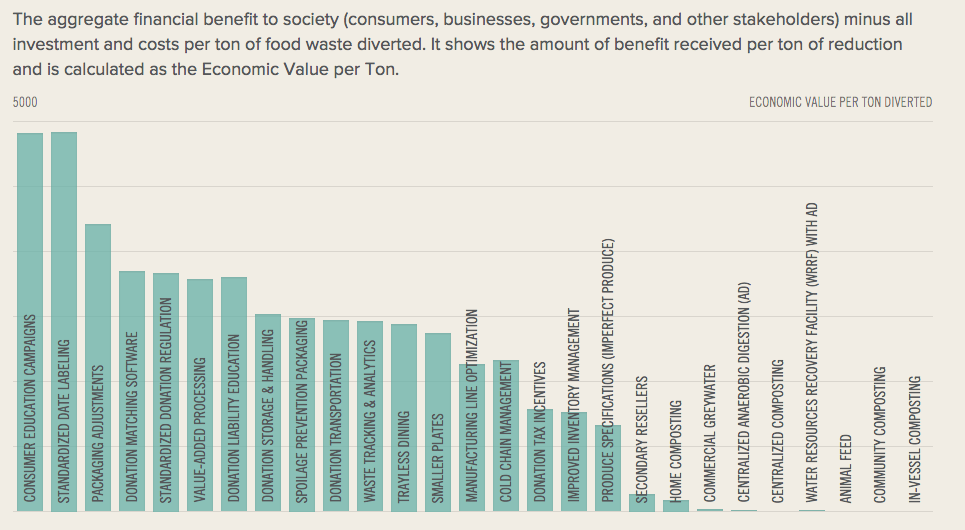 Financial Benefit: ReFED defines this as a strategy's aggregate financial benefit to society (consumers, businesses, governments and other stakeholders), minus all investment and costs per ton of food waste diverted. It shows the amount of benefit received per ton of reduction and is calculated as the economic value per ton. Courtesy of ReFED hide caption

The road map ranks 27 strategies. On the ReFED site, you can scroll through the tabs of the interactive chart to explore the different metrics you can use to rank the effectiveness of a strategy — from emissions reduced to water saved to jobs created to economic benefit per ton of waste. (Warning: You can spend some serious time toggling through these graphs!)

So, what's at the top of the list for its potential to divert food waste? No. 1 is centralized composting. (Think of a Seattle-style approach, where food waste doesn't go into trash, but to composting facilities.) 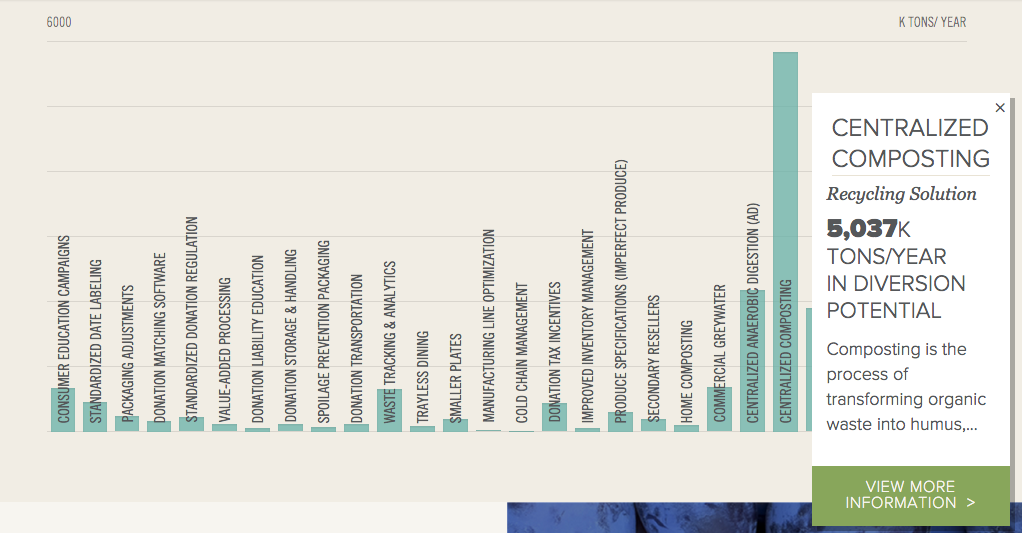 You know about backyard composting? Well, creating a centralized version — where all food scraps end up as humus, not trash — could make a big difference, ReFED says. Courtesy of ReFED hide caption

"Food waste recycling solutions like large-scale composting and anaerobic digestion have the potential to divert 9.5 million tons of food scraps from landfills every year," says Chris Hunt, who serves on ReFED's advisory council. He has written an analysis of the road map that explains how reducing food waste can also reduce the environmental impacts.

One example: a recycling and composting program at Assumption College in Massachusetts resulted in a reduction of 90 tons of refuse from landfills, according to Deborah Hecker, vice president at Sodexo, a multinational food services company that is part of the ReFED collaboration.

Another approach that could potentially lower our grocery bills: standardized date labeling on food packages.

You know all those sell-by, best-by and best-before dates stamped on food labels? As we've reported, those dates indicate when a food tastes best — they have nothing to do with food safety. But many consumers don't know that, and that confusion leads Americans to toss out about $29 billion worth of perfectly good food each year, according to ReFED's estimates.

Date Labeling: Current date labeling practices on food can confuse consumers about when an item is still safe to eat. Up to 90 percent of Americans occasionally throw out still-fresh food, according to ReFED. Courtesy of ReFED hide caption

For instance, who knew that eggs are often good for three to five weeks after the date stamped on the box? (There are lots more tips for consumers here.)

"Giving people ... information to make small changes to waste less can actually add up to make a huge difference," says Dana Gunders, the author of the Waste-Free Kitchen Handbook.

Gunders says there are a lot of efforts underway to address date labels. Wal-Mart has devised its own standardized labeling for private-label products (such as its Great Value house brand). And the Grocery Manufacturers Association and other food industry groups may help create voluntary guidelines for date labels. U.S. Congresswoman Chellie Pingree, a Democrat from Maine, has introduced legislation aimed at creating a standard date-labeling guideline for food.

Entrepreneurs and investors, take note: Some solutions to food waste identified in the road map lend themselves to business innovation and investment, rather than consumer action.

For instance, there's modifying food packaging to optimize consumption. One idea: How about creating compostable salad bags, so that plastic bags of lettuce don't end up in landfills?

Another idea: developing value-added processing facilities that turn surplus foods that might otherwise be wasted into products such as soups, sauces and jams. For example, Whole Foods already makes smoothies from ugly and excess fruits, but the ReFED folks can foresee large-scale operations that focus on these efforts.

There are a lot of ways to create economic value by thinking anew about these challenges, says Eric Kessler, head of Arabella Advisors' food practice, a consultancy for philanthropists and investors in the food sector.

"From building demand for ugly produce to collecting spent brewery grains and selling it as animal feed, solving the food waste crisis should be an economic and employment windfall," Kessler tells us.