Accessibility links
Bill Blocking GMO Labels Stalls In Senate, But Battle Is Far From Over : The Salt The bill would have created a national voluntary labeling standard — and prevented Vermont's mandatory labeling law from going into effect July 1. A compromise might yet be reached.

Bill Blocking GMO Labels Stalls In Senate, But Battle Is Far From Over

Bill Blocking GMO Labels Stalls In Senate, But Battle Is Far From Over 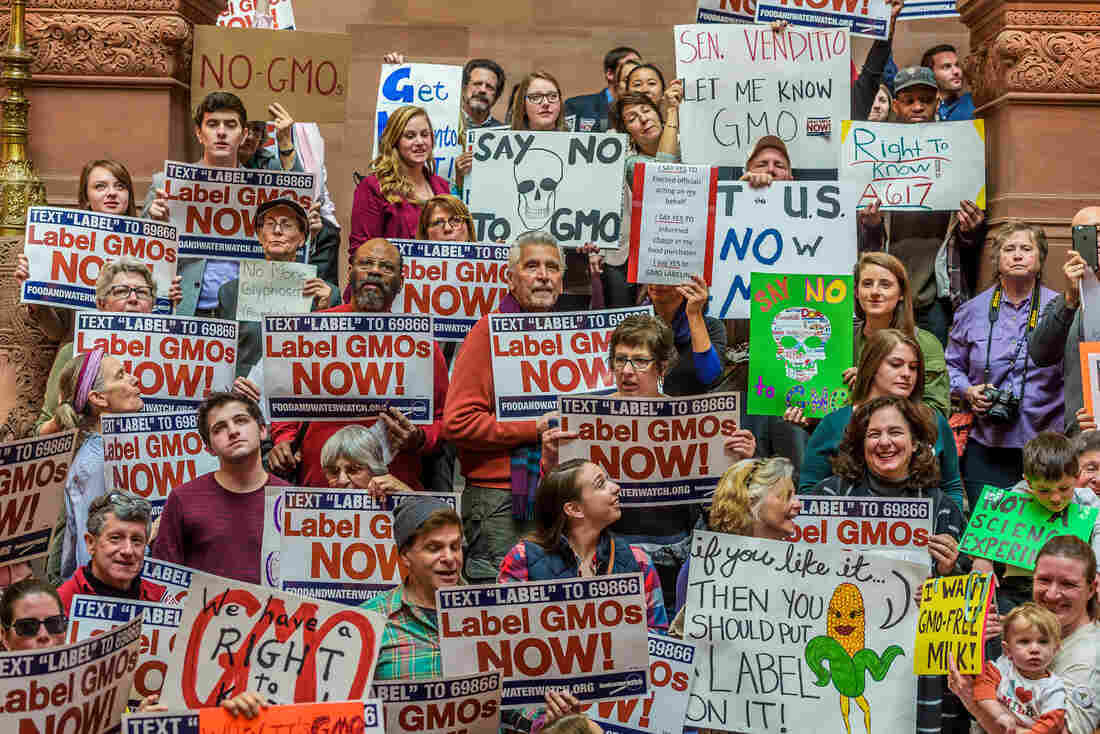 Protesters gathered at the New York state Capitol in Albany earlier this month to lobby their legislators to make GMO labels on foods mandatory in the state. Erik McGregor/Pacific Press/LightRocket via Getty Images hide caption 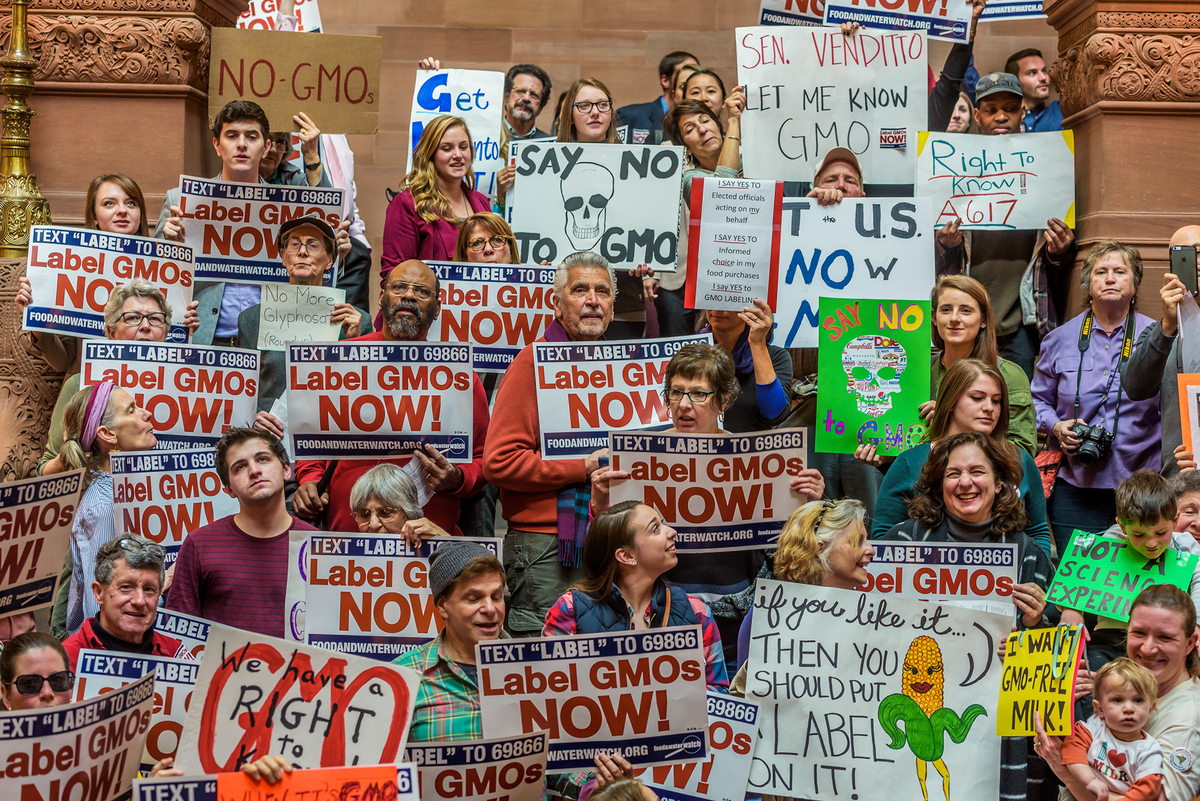 Protesters gathered at the New York state Capitol in Albany earlier this month to lobby their legislators to make GMO labels on foods mandatory in the state.

It's been called "perhaps the most contentious issue in the food industry": Should food products be labeled to indicate they contain genetically modified ingredients?

Leading Republicans in the Senate tried to answer that question on Wednesday with a clear "no," but failed. The Senate rejected a bill that would have prevented any state from requiring GMO labels on food. The bill, sponsored by Kansas Republican Sen. Pat Roberts, would have created a voluntary national labeling standard for foods containing GMOs, but it would have blocked Vermont from implementing its first-in-the-nation mandatory GMO labeling law, currently set to take effect on July 1.

The Roberts bill failed to get the 60 votes needed to move forward. The cloture motion failed 48-49. Now, a compromise will almost certainly have to be crafted.

Before the vote, Debbie Stabenow of Michigan, the Senate agriculture committee's ranking Democrat, said negotiations would carry on, and she hoped a deal on a national GMO labeling standard could still be worked out before the end of the week, according to AgriPulse.

Among those opposing the Roberts measure was Just Label It, a coalition of businesses and organizations supporting mandatory GMO labels on food.

"This is the most hotly debated issue in food right now," says Scott Faber, the group's executive director.

That argument — consumers' right to know — holds sway among many legislators. Earlier this month, during debate on the Roberts bill in the Senate agriculture committee, many lawmakers pointed to polls that show a majority of Americans support labeling genetically modified ingredients in foods. (However, Grist's Nathanael Johnson has pointed out that "[b]ig majorities of survey respondents also say, nonsensically, that they'd like mandatory labels for food containing DNA.")

On the other side of the debate are those who argue that labels would inherently suggest something is wrong with foods containing GMOs, even though major scientific bodies — from the American Association for the Advancement of Science to the World Health Organization to the American Medical Association — insist genetically modified foods are safe to eat.

Opponents say that having to comply with a patchwork of state labeling requirements would be costly, because many food companies would likely reformulate their products to avoid a label, resulting in higher prices. Ultimately, that would raise grocery bills for the average American family by more than $1,000 a year, according to estimates released this month by the Corn Refiners Association.

Chip Bowling, president of the National Corn Growers Association, said he was "disappointed" with the outcome of Wednesday's vote. "Farmers are committed to creating greater transparency in the food system, but we also need Congress to set clear, commonsense guidelines that are based in science and keep food affordable for American families," he said in a statement.

Still, reformulating and labeling might ultimately be good business, says Jack Russo, a senior analyst of consumer staples industries at Edward Jones. He says that consumers — particularly middle- and high-income ones — increasingly "want to know what they're putting in their bodies." That's true across generations, he says, but it's especially true of millennials.

"I think the food companies really have to pay attention, because their future customers are the millennials," he tells us — and costly changes now "in the long run will pay off for them."

The labeling battle has made for strange bedfellows, with some Republicans – who usually embrace states' rights – supporting preempting state labeling measures.

However, Senate Majority Leader Mitch McConnell, a Kentucky Republican, on Wednesday voted against the measure – a tactic that would allow him to bring the bill back up for a vote later if an agreement is reached.

One compromise proposal from Sen. Jeff Merkley, an Oregon Democrat, would give manufacturers a choice of four ways to label GMOs. As The Hill reports:

"[Manufacturers] could choose to put the words 'genetically engineered' in parentheses next to a relevant ingredient; identify GM ingredients with an asterisk and provide an explanation for the asterisk at the bottom of the ingredients list; apply a catch-all statement at the end of the ingredient list stating the product was 'produced with genetic engineering' ingredients; or use a symbol on the label, designed by the Agriculture Secretary, to disclosure the presence of GMOs."

But a spokesman for Roberts, who chairs the Senate agriculture committee, tells NPR that the senator would not support the Merkley measure.