Accessibility links
Feast Like It's 399: The (Maybe) True Culinary Adventures Of St. Patrick : The Salt The patron saint of Ireland was born to high status in Britain, then stolen away by pirates as a teen. It's a life story with plenty of fodder to cook up an unexpected, historically inspired menu. 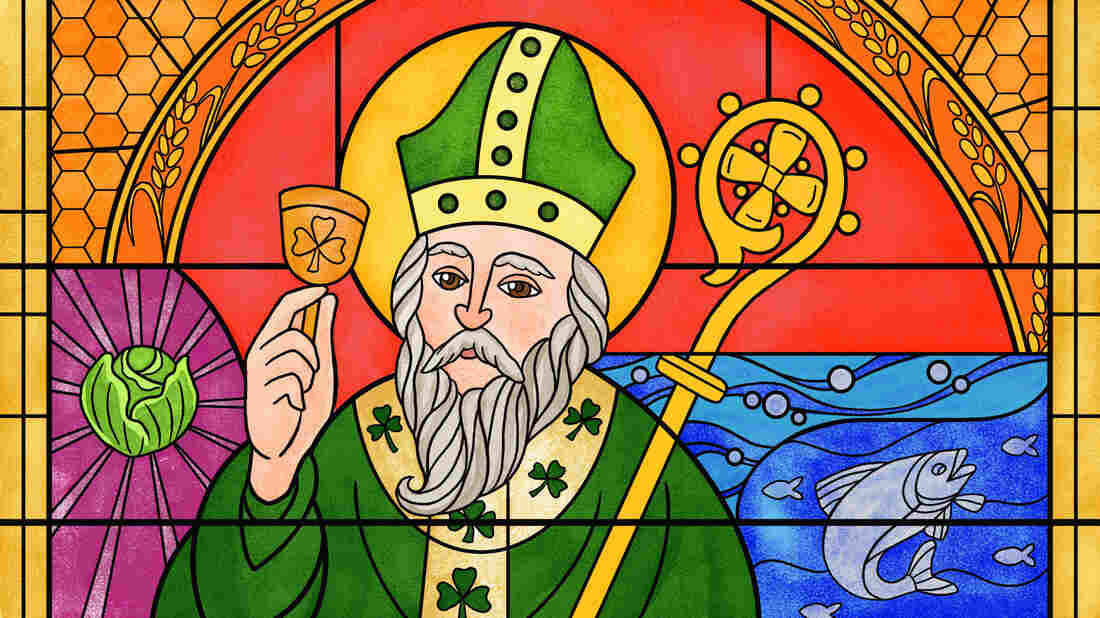 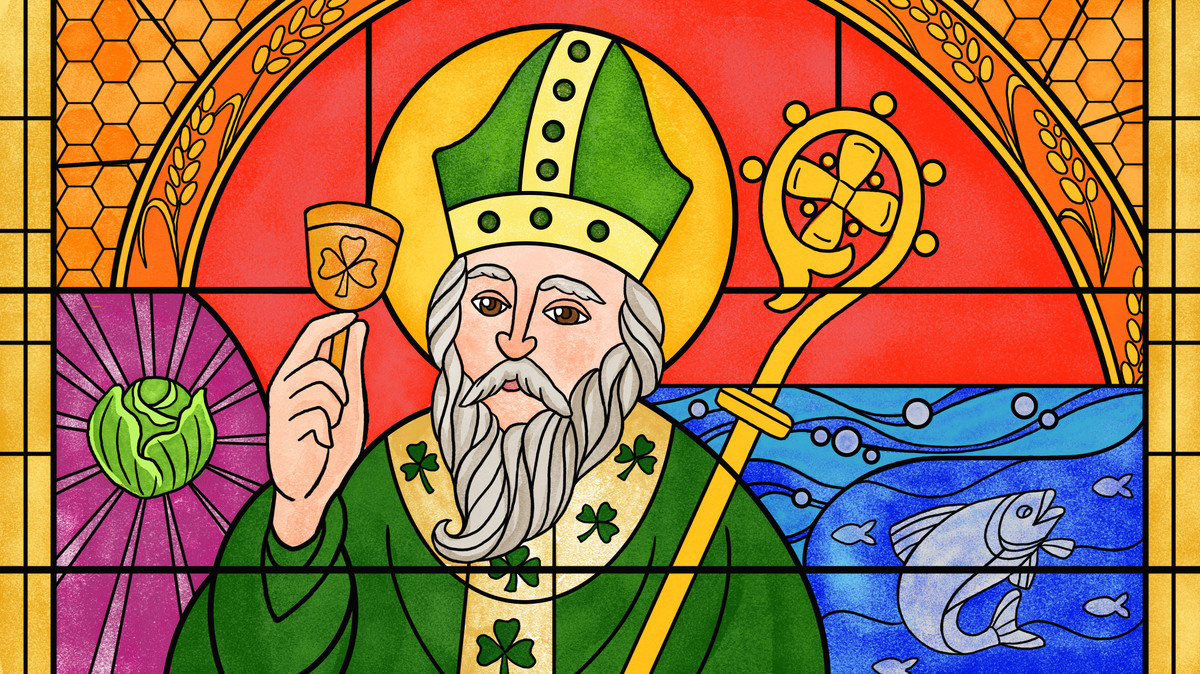 Today is the day that the Guinness flows freely, tough brisket is transformed into tender corned beef, and we celebrate the Emerald Isle with humble cabbage. This holy trinity of meat, veg and stout is the communion of St. Patrick's Day.

But the history of that meal is relatively short, going back mainly to trade and immigration in the 18th and 19th centuries. Want to feast like St. Patrick would have celebrated more than 1,600 years ago? Let's party like it's 399.

First, it's important to remember that Patrick wasn't born in Ireland, but in late 4th-century Britain, a period of great change. Anglo-Saxons from Germany, Denmark and The Netherlands were just moving in and beginning to push out the Mediterranean culture and cuisine of the Romans, who had occupied Britain for several centuries. That means a lot of different culinary influences from which to choose your menu.

Patrick grew up in "a high status, slave-owning Romano-British family," says Caitlin Green of the University of Cambridge's Institute for Continuing Education. "We would clearly expect him to have a very late Roman aristocratic lifestyle in his youth."

Think Mediterranean and French wines "imported on a large scale," says Mark McKerracher, an archaeologist who blogs about Anglo-Saxon agriculture at Farming Unearthed.

Coriander and dill, McKerracher says, were other "Roman innovations" that gave dishes Mediterranean flair, as were peas and early relatives of the broad bean.

According to Green, game was also moving onto the menu. "Very little of this was eaten in the Romano-British period in general," she says. "But there is evidence for a greater consumption of venison and wild birds in the very late/post-Roman era."

As a teenager, Patrick ended up in Ireland, one of the few European outposts Roman influence failed to reach. The popular story, told by Patrick in his Confessio, is that he was stolen away from Britain by pirates and sold into slavery.

But Cambridge University's Roy Flechner has suggested that Patrick was running away from the expectation that he would take over his father's official duties in Britain — and even that Patrick might have been the slave trader, rather than the slave. That changes whether we think he dined like an expat with a mild case of "affluenza" or subsisted like an enslaved herdsman, as Patrick says in the Confessio.

Either way, without Roman influence, the cuisine of Ireland had its own style. Regina Sexton, food and culinary historian at University College Cork, tells us that the local diet was based largely on dairy and grain — especially oats. There were oatcakes, "more like a hard bread or a cracker," and muesli-like mixtures of fruit, nuts and oats. The thick cooking residue from oats might be made into sowens, "a type of jelly." And oats were often cooked as oatmeals and gruels.

The Dark History Of Green Food On St. Patrick's Day

"As a slave," says Sexton, gruels "would be what Patrick ate."

Barley was mostly for making ale; wheat was reserved for the highest status of bread. So, if you celebrate Patrick the wealthy rather than Patrick the poor, swap your usual soda bread for a soft wheat loaf and add to the bill of fare English salt, imported wine, and more meat than the average Irish native would have experienced.

Much of the evidence for what the ancient Irish ate comes from the Brehon Laws, which covered everything from land rents to beekeeping, as well as marriage, divorce and trespassing — "all the things you would think would be of concern to agricultural communities," says Sexton.

Not surprisingly, Irish stories and legends make for more interesting reading than Irish laws. Even though they were written mostly in the 8th to 12th centuries, many of these tales throw open a window onto the world of upper-class feasts and foods of an earlier time, explains Ger Killeen, professor of Irish and Celtic literature at Marylhurst University in Portland, Ore.

The Vision of Mac Conglinne, an anonymous parody of religious "vision" literature, imagines a castle made of food: "New butter was the bridge ... bacon the palisade, the door was dry meat, the threshold was bare bread, and cheese curds the sides." And fine cream, fresh cheese and aged cheese served as mortar to hold up the house throughout.

But there are only two foods that Patrick actually records eating, says Killeen. In his Confessio tale of escape from Ireland, Patrick and those who aided him "manage to survive on wild honey" and deer, thanks to Patrick's prayers for hunting success.

As history tells us, Patrick eventually returned to Ireland as a missionary and the religious figure we celebrate today. For a meal honoring his later years, Killeen suggests something simple: "wheat bread, some kind of soft cheese, maybe flavored with garlic." And salmon, "a highly esteemed foodstuff."

Sexton seconds the salmon, along with other oily fish, and "eels, trout, apples, hazelnuts, watercress, wild garlic." And early varieties of cabbage.

It's hard to get away from cabbage, no matter which era or which Patrick you choose to celebrate. But you can always call on his Roman past with a little coriander and dill in the dressing. And whether you swap your stout for a light barley ale or a glass of red Italian Cesanese, trade the corned beef for some estimable salmon, or make a castle out of Cashel blue cheese, Ireland's signature brassica will be at home on any of these menus honoring Ireland's national saint.

Anne Bramley is an independent scholar who is the author of Eat Feed Autumn Winter. She writes the Food and Ritual column at The Kitchn.