Accessibility links
Gigi The Cow Broke The Milk Production Record. Is That Bad For Cows? : The Salt Cows are being bred to be larger, hungrier, and more productive. But this drive to raise ever-larger, hulking Holsteins has some prominent livestock advocates ringing alarm bells. 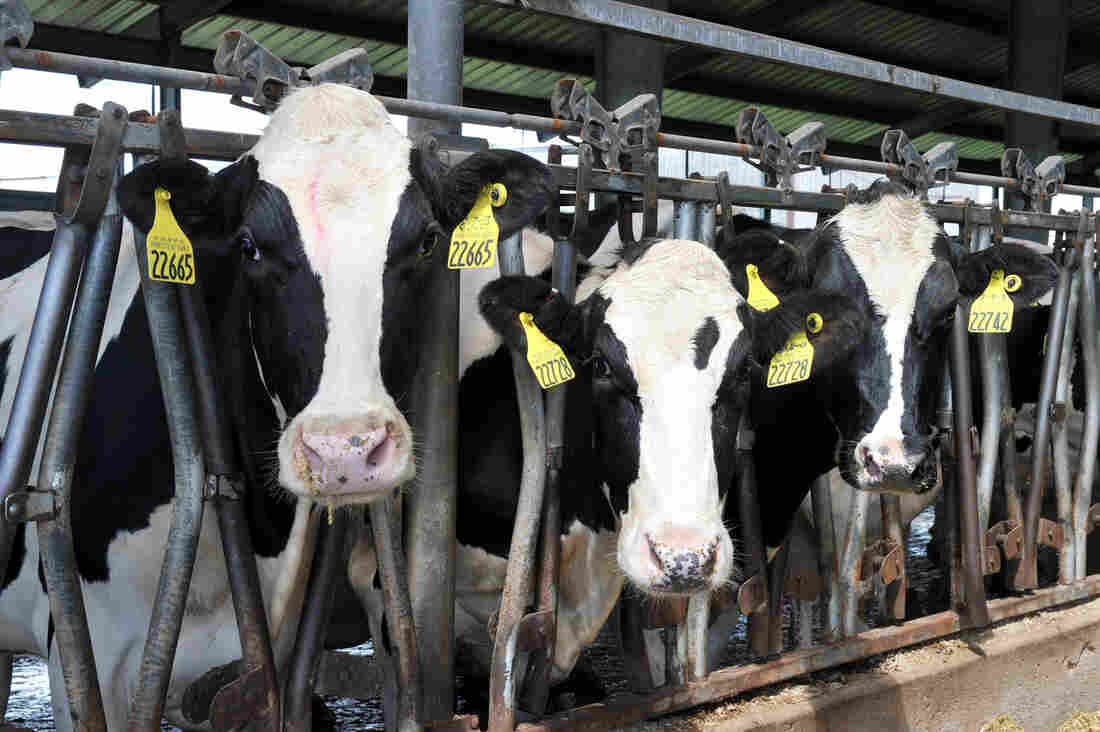 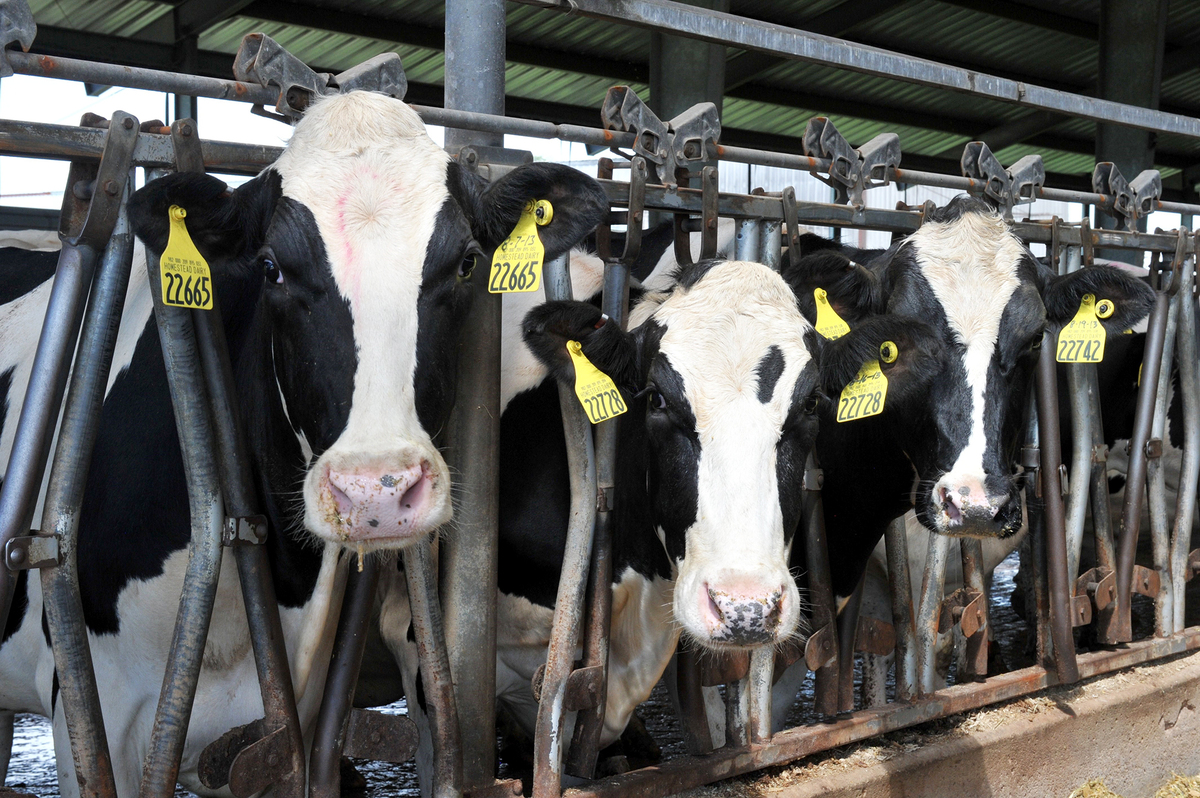 When it comes to milk production, Gigi the cow is queen.

And she's earned that diva status: Earlier this year, she produced more milk in one year than any other cow had done before — just shy of 75,000 pounds of milk, roughly equivalent to 8,700 gallons. That's triple the national average for a dairy cow to produce in a year.

Like an Olympic sprinter, she has a nutrition plan, a doctor who sees her regularly and technology to measure her progress.

But really, it's her massive stature that helps her produce such incredible amounts of milk. She weighs nearly a ton and she's 5-feet-2-inches-tall. Behnke says she's as wide as a grown man's shoulders.

Gigi is a Holstein — that breed of iconic black and white dairy cows. And her record-breaking year tells the dairy industry that, for right now, 75,000 pounds of milk in a year is the threshold for what Holsteins' bodies are capable of.

But that threshold has been changing for years. Since dairy cows were first brought to the United States, their owners have been trying to coax more and more milk out of them. They've done that through dairy parlor design, barn layout, feed rations, milk scheduling and hormone treatments.

Now the focus is on genetics: Cows are being bred to be larger, hungrier, and more productive. But this drive to raise ever-larger, hulking Holsteins has some prominent livestock advocates ringing alarm bells. 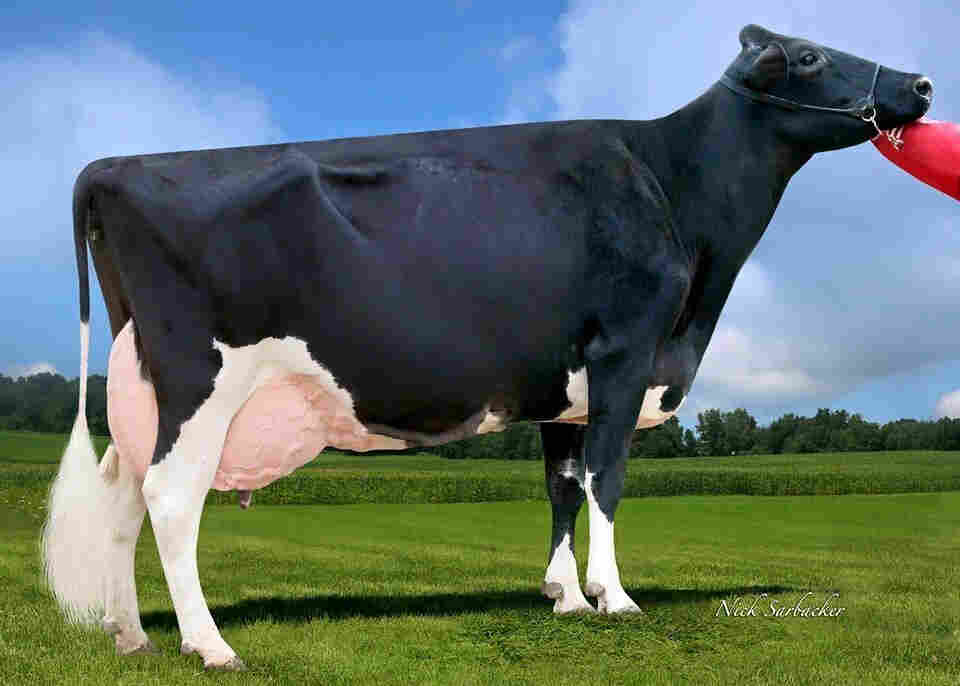 Gigi the cow is the queen of dairy production. Courtesy of Bur-Wall Registered Holsteins hide caption 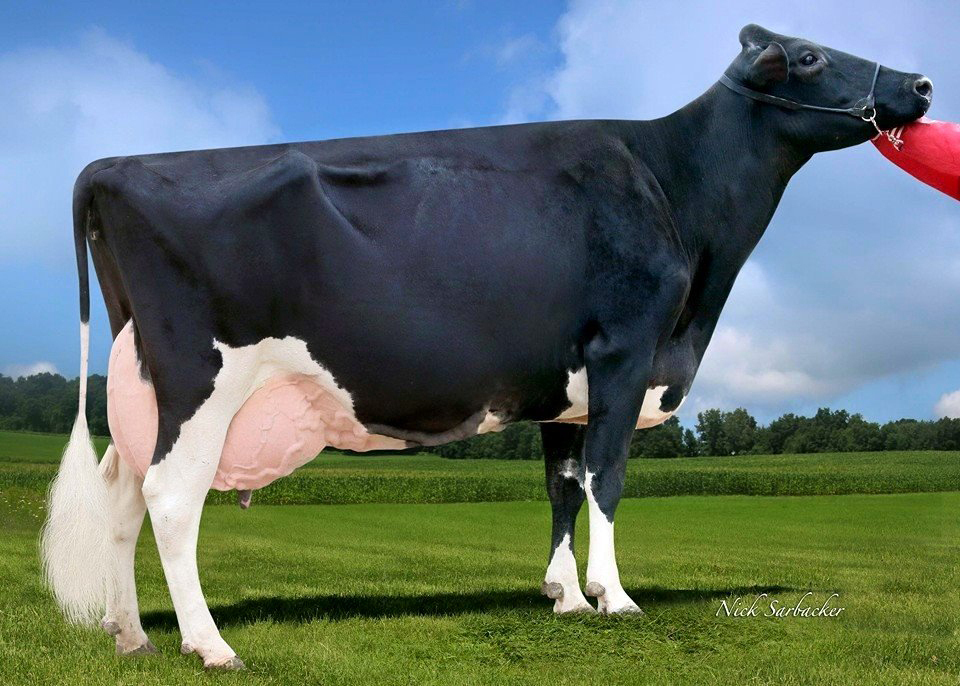 Gigi the cow is the queen of dairy production.

Thousands of new calves are born every day on the country's 46,000 dairy farms. Most are the product of artificial insemination and other reproductive technologies meant to breed more productive, more efficient cows.

Wide adoption of artificial insemination in the U.S. dairy herd began in the 1970s. These days, the largest cattle genetics companies, like Wisconsin-based Alta Genetics and Ohio's Select Sires, hand out catalogs to prospective semen and embryo buyers, with charts for studs and dams with measurements on everything from teat length to udder depth to rump width.

Farmers are also trying embryo transfer technology and sexed semen, which is processed to allow dairy farmers to only create daughter calves.

With genetic improvements, American milk production has increased at a quickened pace. In the last 10 years, production per cow has gone up 14 percent.

Modern Holsteins are now "definitely bigger than the beef cows," says Tom Lawlor, a geneticist with the Holstein Association USA.

"We're just sifting through the cattle, identifying the ones that are just a little bit more productive, more healthier, and trying to get more progeny from them and fewer from the other ones," Lawlor says.

Like nearly everything in agriculture, the increase in milk production doesn't come without a few trade-offs.

"Instead of going for maximum milk production, let's optimize it," says Temple Grandin, a Colorado State University animal science professor who has been critical of the dairy industry.

A narrow focus on production blinds dairy farmers to other important health issues on the farm, like lameness and a drop in reproduction rates, she says. Smaller cows tend to produce less milk, but last longer and calve more often. It may not be as profitable right away, but it pays off, she adds.

"If you go for the big, gigantic Holsteins, you only get two years of milking," Grandin says. "That's not very sustainable."

Even the cows' height brings up an animal welfare issue. Grandin, who stands at 5-foot-8, says she has seen Holstein steers with shoulders as tall as she is.

"They don't fit on the trucks and they're tearing up their backs. And we have a height limitation due to bridges," Grandin says. "You're not going to change that."

Some dairies have begun to back off on production and breed smaller, but hardier cows, Grandin says. She praises large, progressive dairies like Indiana-based Fair Oaks Farm, which lets visitors tour its facility, complete with a rotating milking apparatus.

If breeding ever-larger cows has some drawbacks, one way to coax more milk out of the herd is to focus on cow comfort and handling. On a cold winter morning at a farm with nearly 2,000 cows in Colorado's northeastern corner, veterinarian Doug Ford walks past an open dirt pen where the cows are able to move around.

"Just look at these cows, look how content they are," Ford says. "They are just enjoying the morning."

As the veterinarian for several large dairies near Brush, Colo., his philosophy on increasing production comes down to handling. Even cows with impeccable pedigrees will have trouble producing if they're not treated well, Ford says. He teaches dairy staff low-stress methods, which allow the animals to move more freely between the milking parlor and their pens, focusing on how workers place their bodies in relation to the large bovines.

"In the industry we all have the same feed trucks, the same vaccines," Ford says. "What sets one operation apart from the other? It's the people, and it's the way they treat the animals."