Accessibility links
Health Workers Warn Foragers: Beware Of Poisonous Death Caps, Which Look Like Edible Mushrooms : The Salt Death caps, which are abundant throughout California, can easily be confused for edible mushrooms. But just one of these unassuming, greenish caps contains enough poison to kill someone.

In California, Poisonous Death Cap Mushrooms Are The Forager's Bane

In California, Poisonous Death Cap Mushrooms Are The Forager's Bane

Donna Davis thought she had hit the jackpot with the two bags of mushrooms she collected in the woods of Northern California's Salt Point State Park. Instead, she ended up in the hospital, facing the possibility of a liver transplant, after mistakenly eating a poisonous mushroom known as the death cap.

The 55-year-old life coach and her boyfriend had collected chanterelles, matsutakes and hedgehog mushrooms, all sought-after edible species.

That night, Davis made mushroom soup for herself, her boyfriend and a group of their friends. "It was amazingly delicious," Davis says. So good, in fact, that she had two bowls. 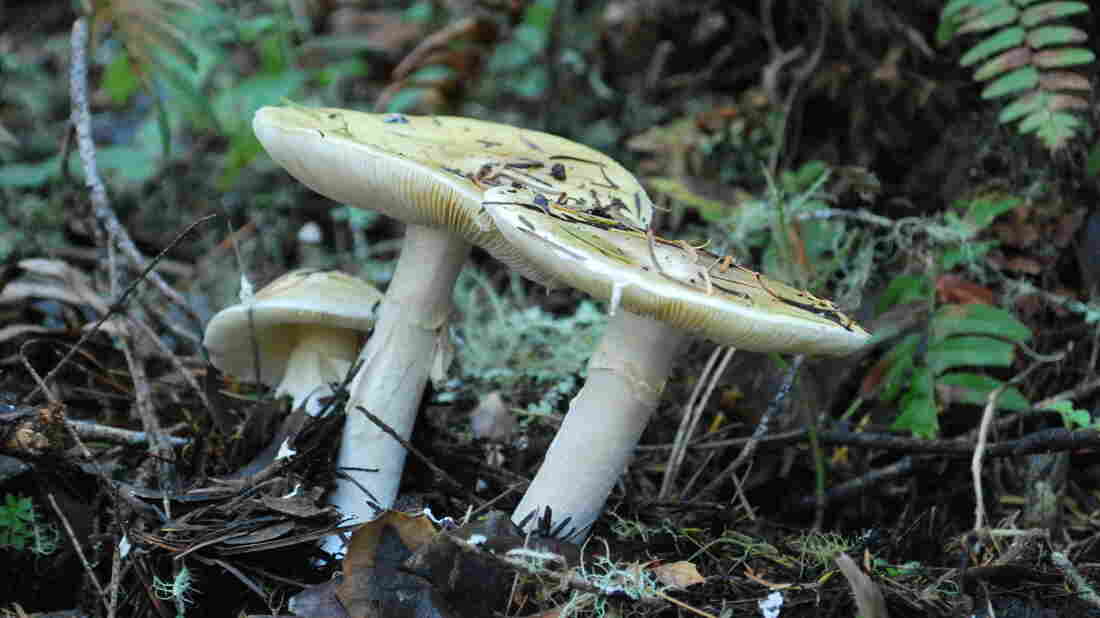 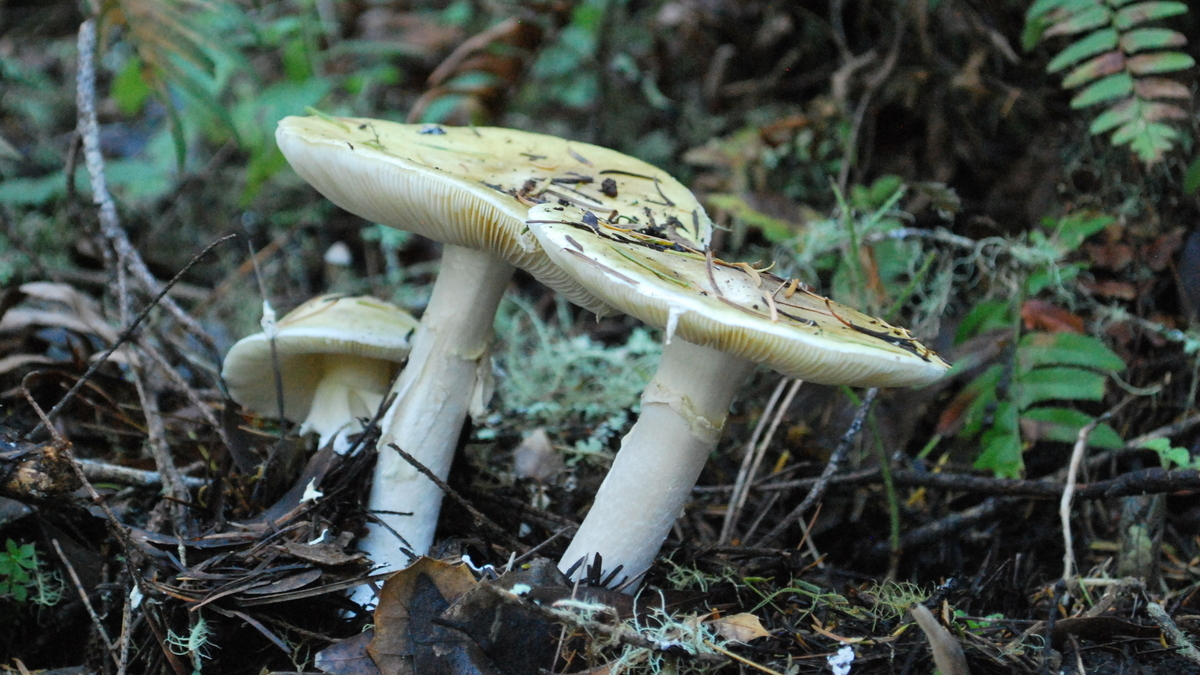 And she felt fine. Until the next afternoon.

"I slept for three days," says Davis, of her illness in December 2014. "I was kind of in and out of it, just drinking water and not being able to really hold anything down."

When she dragged herself to a mirror, she realized she had turned yellow.

Davis isn't the first or only forager who has fallen victim to the death cap.

Between 2010 and 2015, five people died in California and 57 became sick after eating these unassuming greenish mushrooms, according to the California Poison Control System. One mushroom cap is enough to kill a human being, and they're also poisonous to dogs.

The trouble is, people feel fine for six to 12 hours after they've eaten death caps, says Dr. Kent Olson, the co-medical director of the San Francisco Division of the California Poison Control System. But during that time, a toxin in the mushroom is quietly injuring their liver cells. Patients then develop severe abdominal pain, diarrhea and vomiting.

"They can become very rapidly dehydrated from the fluid losses," says Olson. Dehydration can cause kidney failure, which compounds the damage to the liver.

When Davis went to the hospital, doctors put her on intravenous fluids. They also pumped her stomach full of activated charcoal to help absorb the poison out of her body, although some doctors question the usefulness of this treatment when many hours have elapsed since the poisoning occurred.

For the most severe cases, the only way to save the patient is a liver transplant, says Olson. (Davis didn't end up needing one and went home before Christmas.)

Researchers are looking for better treatments. One group of scientists is testing the drug silibinin, which can protect a patient's liver and make a transplant unnecessary. 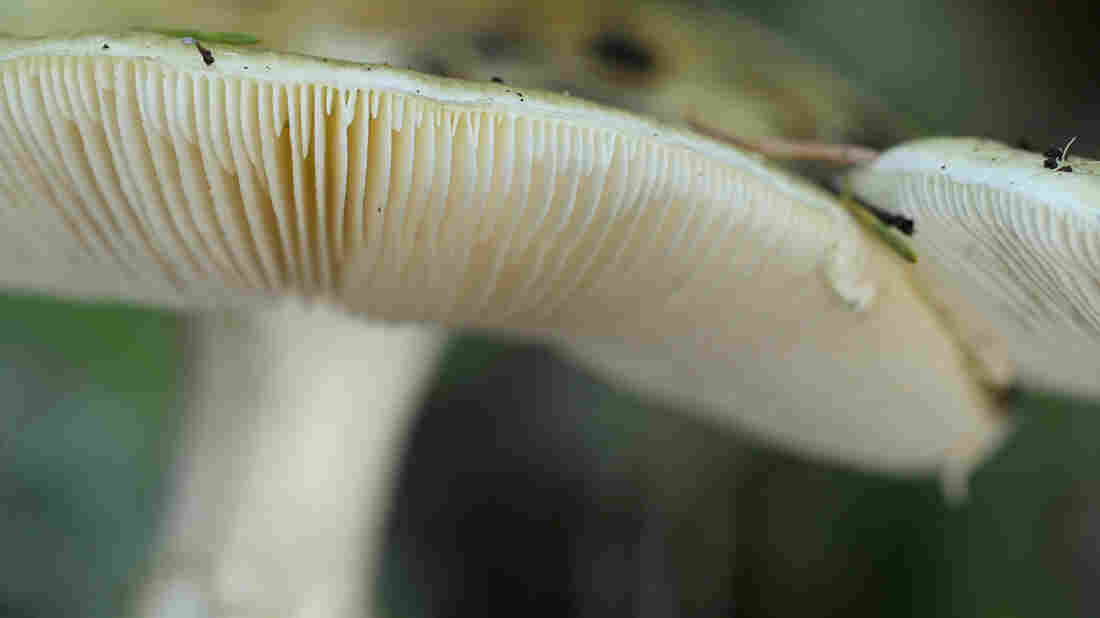 Death cap mushrooms have gills from which they launch spores in order to reproduce. Josh Cassidy/KQED hide caption 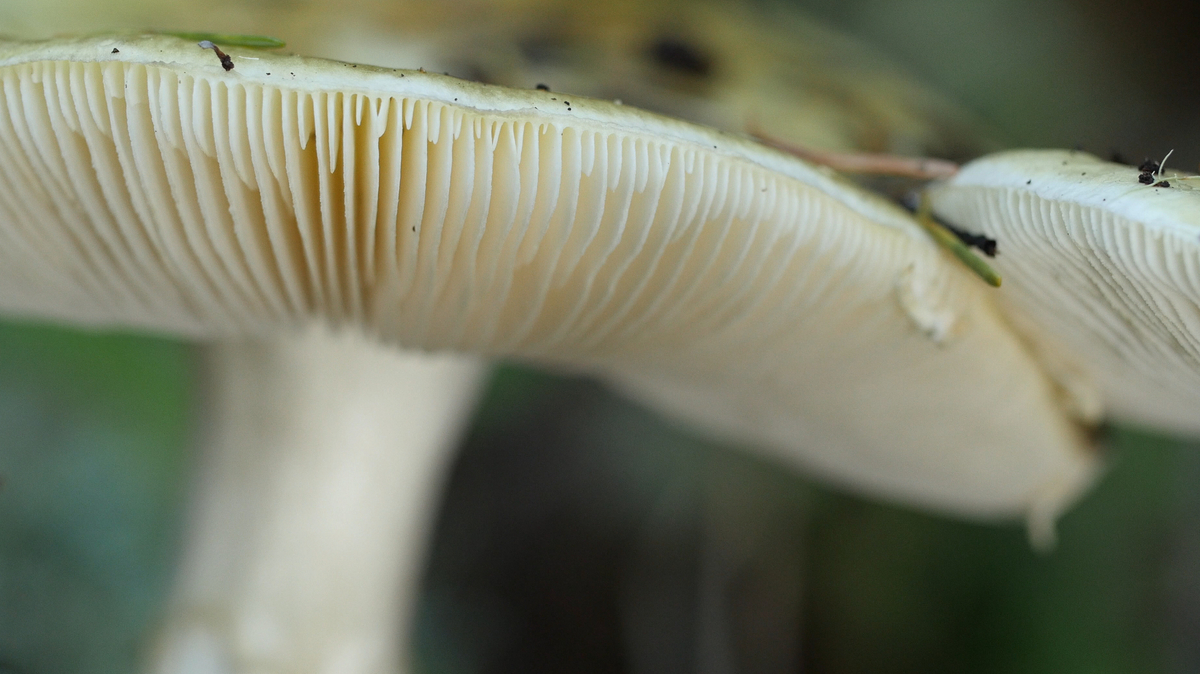 Death cap mushrooms have gills from which they launch spores in order to reproduce.

And other scientists are trying to learn more about death caps — hoping to find a weakness they can exploit to defeat them.

The death caps arrived in California from Europe as early as the 1930s and '40s, says Anne Pringle, a biologist at the University of Wisconsin, Madison. She discovered this timeline through genetic testing of death cap samples collected in California during this era. She says death caps likely sneaked into California from Europe attached to the roots of imported plants — and they got really comfortable, spreading all over the state.

Through genetic testing, Pringle is trying to better understand how death caps propagate, and how long they live. In mushroom-producing fungi like the death cap, much of their body lies under the earth's surface. (The mushrooms are just there to help the fungus spread spores and reproduce.) Pringle wants to know how long the underground bits last — would simply plucking the mushrooms to prevent them from spreading their spores through the air be enough to kill off individual death cap fungi? Or is the death cap more resilient — does each individual develop a vast underground network that would be near-impossible to eradicate?

For now, it's looking like the death caps are here to stay.

With this year's mushroom foraging season well underway, health workers and experts are warning aficionados to be careful. Death caps, which are abundant in California, can easily be confused for other edible mushrooms, growing mainly under coast live oaks. Death caps have also been found under pines, and in Yosemite Valley under black oaks.

And it's not just amateurs who mistake death caps for edible mushrooms like coccora or paddy straws. "I've seen expert mycologists arguing good-naturedly about whether a mushroom they were looking at was the deadly one," says Dr. Kent Olson, co-medical director of the San Francisco Division of the California Poison Control System. "At certain stages of development, the mushrooms can be confused."

In hindsight, Davis thinks she confused young death cap mushrooms — which have a rounded yellowish-green cap — for hedgehog mushrooms, which are yellow and rounded. 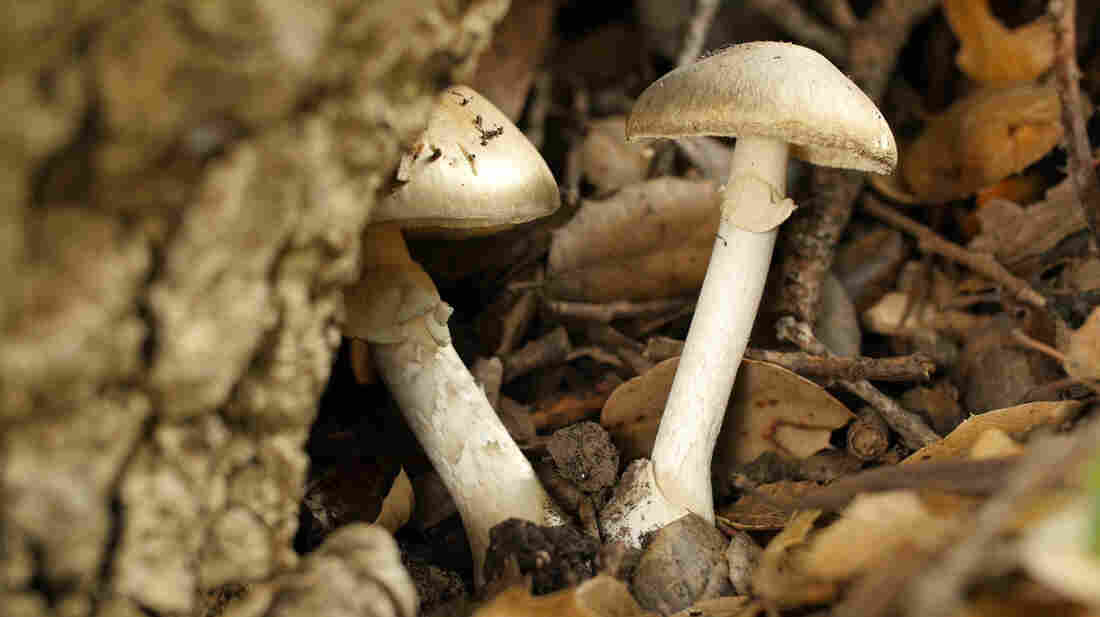 Death caps under a tree at the University of California Botanical Garden, in Berkeley, California. Death caps are popping up in California year-round in irrigated areas like gardens. Josh Cassidy/KQED hide caption 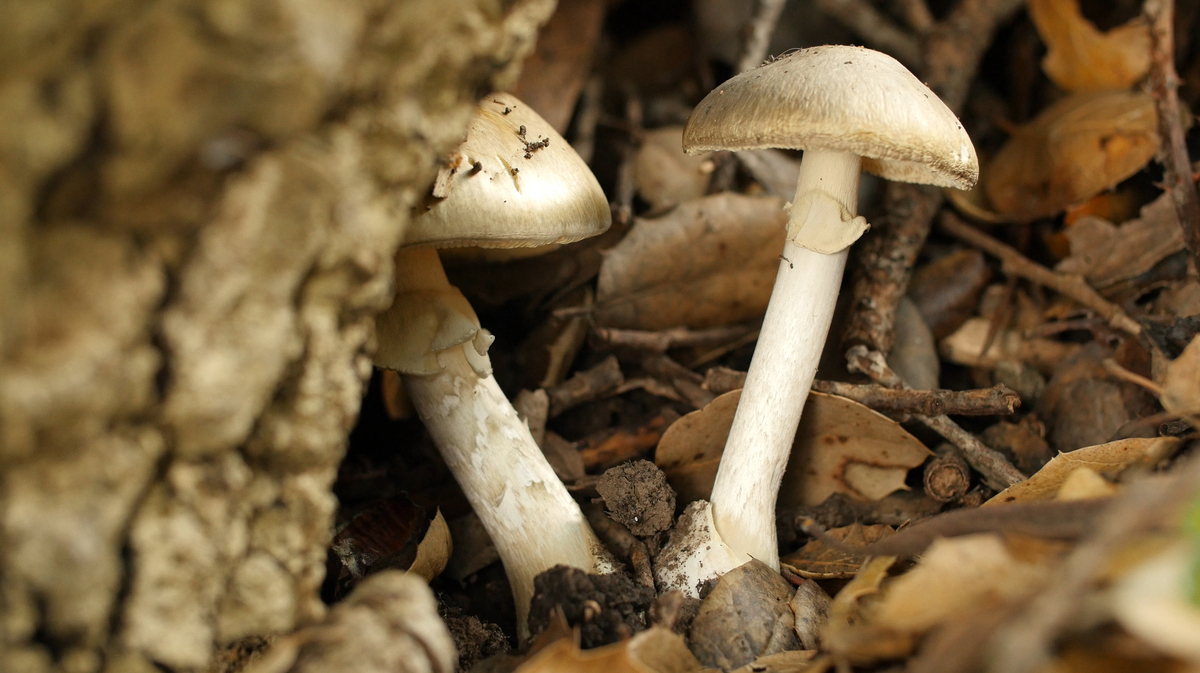 Death caps under a tree at the University of California Botanical Garden, in Berkeley, California. Death caps are popping up in California year-round in irrigated areas like gardens.

Hedgehog and death cap mushrooms are fairly different-looking. While hedgehogs don't have any gills — ribs under the mushroom cap — death caps do have gills.

"It is easy for folks to make ID mistakes," says Viess, "which is why I encourage strong caution for beginners."

Mature death cap mushrooms are big, smooth and an olive green color. And if you pull one out of the ground, you'll see it has a little cup that holds it up.

"Assume nothing, and learn for several seasons before you eat any wild mushrooms," warns Viess from the Bay Area Mycological Society. "Use good, regional books, find a mentor, and have your initial IDs checked by more knowledgeable and trusted identifiers."

As for Davis, after temporarily losing her taste for mushrooms, she is now looking forward to foraging again. But she says she'll be much more cautious.

A longer version of this post originally appeared on the website of KQED's science series Deep Look. For more information on the death cap, you can visit the websites of the Bay Area Mycological Society and the North American Mycological Association.