Accessibility links
For Tokyo's Famed Fish Market, A Dreaded Death And A Hopeful Rebirth : The Salt As the 2020 Summer Olympics loom in Japan, the 80-year-old Tsukiji is moving to more modern facilities across the Bay. But sellers are worried about the accessibility and safety of the new location. 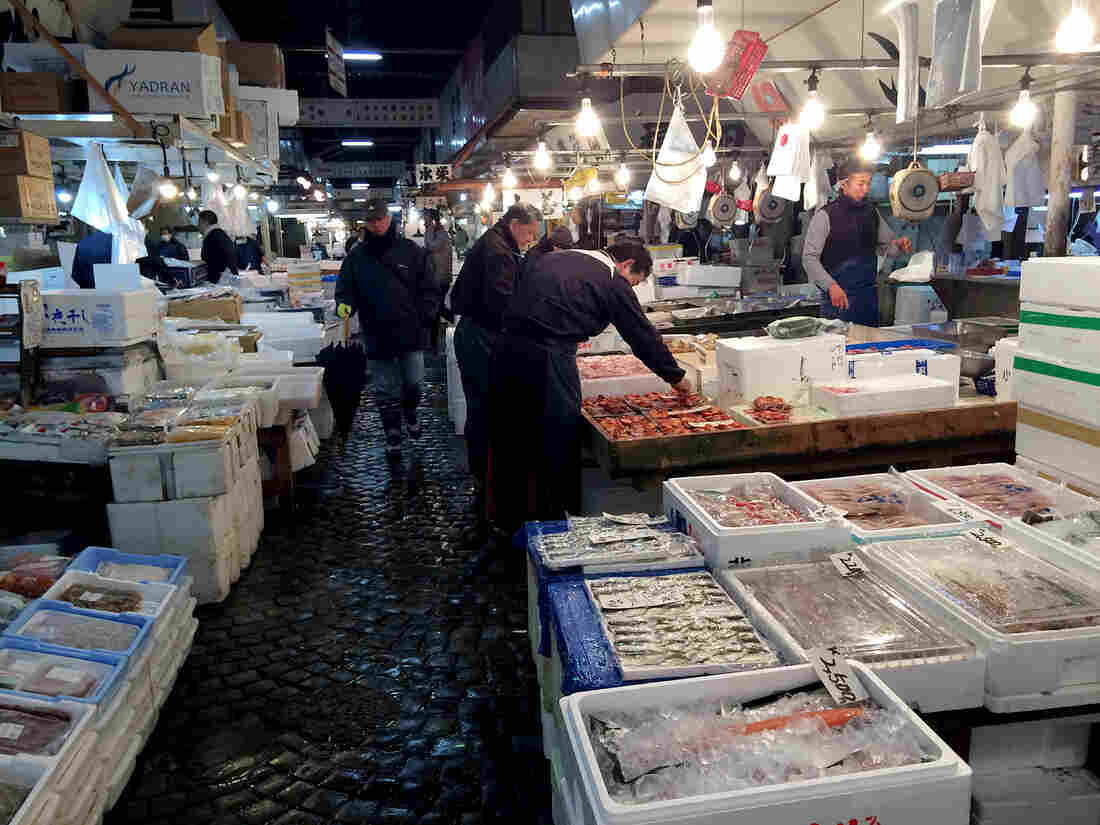 The 80-year-old Tsukiji Fish Market currently sits on some of the most valuable land in Tokyo, with easy access to wholesalers, retailers and tourists. Naomi Gingold for NPR hide caption 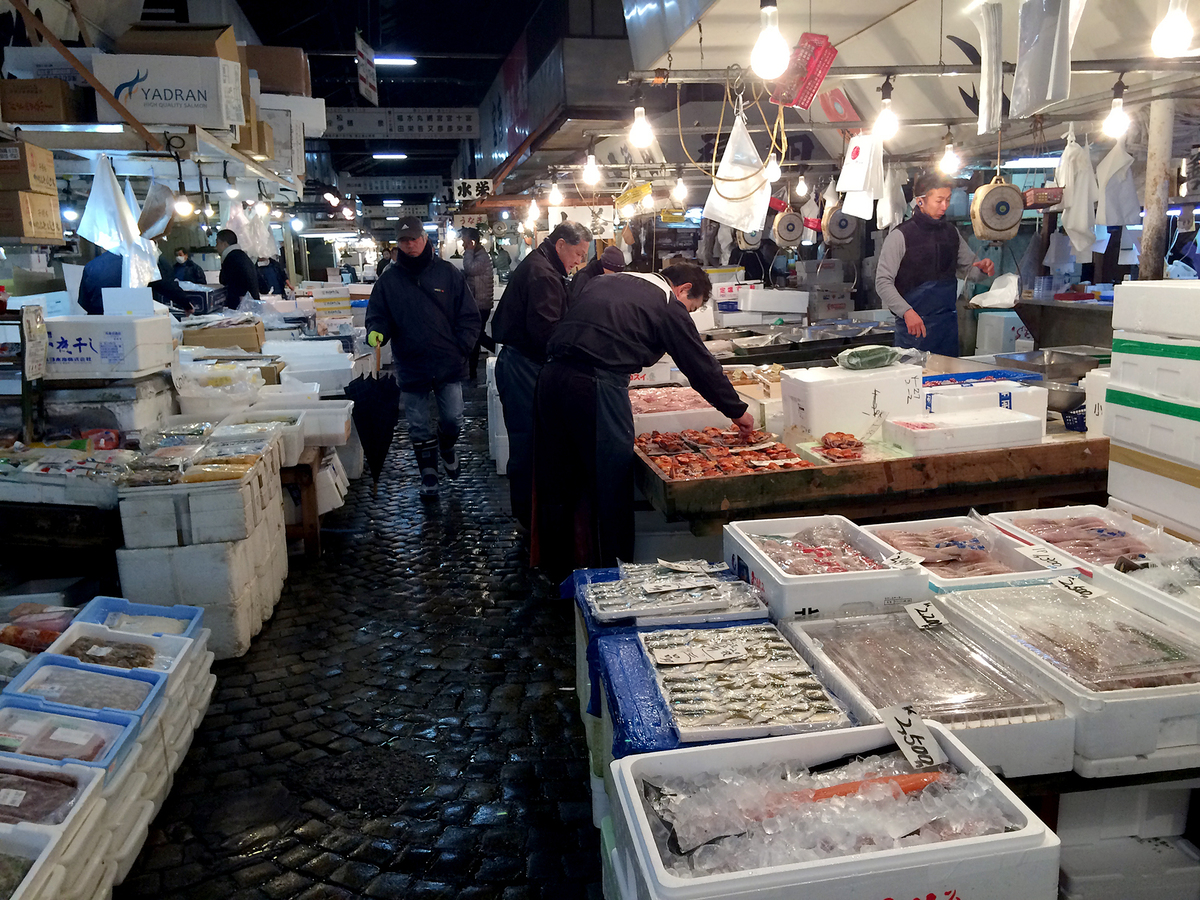 The 80-year-old Tsukiji Fish Market currently sits on some of the most valuable land in Tokyo, with easy access to wholesalers, retailers and tourists.

If you've ever dreamed about melt-in-your-mouth, out-of-this-world sushi, then you might have heard of Tsukiji, the largest fish market in the world. Most of Tokyo, and even high-end sushi joints in Hong Kong and San Francisco, gets its fish at this cultural landmark near the center of Japan's capital city.

Tsukiji sits on some of the most valuable real estate in Tokyo. But this year, the market will be moved permanently to reclaimed land on Tokyo Bay. The 2020 Olympics are coming, and the city is preparing. Part of Tsujiki is slated to become a road for the games. The rest is undecided.

Tokyo officials direct people to the city's website for explanations: Tsukiji is showing its age; the market wasn't built for trucks; temperatures can't be controlled; there are sanitation issues. 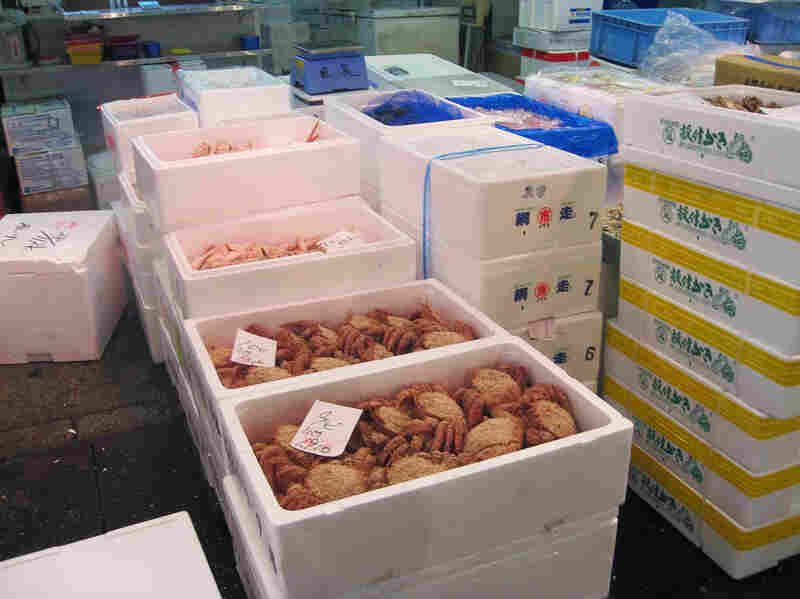 Truckloads of hundreds of varieties of seafood arrive at the market in the wee hours of the morning. Naomi Gingold for NPR hide caption

"From the perspective of tourism, Tsukiji's great. You don't find places as amazing as this. But as a market facility, we've completely reached our limits," says Osamu Shimazu, spokesman for the Tokyo Fish Market Wholesale Cooperative Association, which is not a city agency.

Tsukiji Market, which opened in 1935, sprang to life after the Great Kanto Earthquake destroyed most of Tokyo in 1923, and has since become one of the most popular tourist destinations in the city. Every morning sightseers start lining up at 3 a.m. to watch the frozen tuna auction. The more expensive fresh tuna auctions – where a single Bluefin once sold for nearly $1.8 million – are conducted privately.

There are problems with the new site in Toyusu, which is across Tokyo Bay, out of central Tokyo. It is not near any train or subway lines. The area once contained a gas plant. The city has already spent nearly a million dollars cleaning up chemical contamination, but there are lingering concerns. City officials say the site is clean, but haven't released official data. The new location is also more vulnerable to earthquakes and tsunamis.

Fish sellers also face a financial challenge: They have to cover the costs of constructing new stores. The new market in Toyosu may be bigger, brighter and temperature controlled, but rent is more expensive. And the city is not offering much assistance. About 100 of the current 600 or so fish sellers have decided to shut shop rather than move.

Tsukiji fish sellers speak with an overwhelming sense of resignation.

Takashi Shibayama, 62, has been hawking fish at Tsukiji for 40 years. His grandfather opened their family seafood store, Shibasen, 94 years ago, and moved it to Tsukiji in 1935. During his senior year of college, Shibayama went to work there.

"If I hadn't, I'd have been kicked out of the house," Shibayama says.

However, his grandfather fired him early on, and Shibayama went to work for another fish seller before coming back to the family store about 10 years ago. Recently his nephew started working at the store — the fourth generation to do so.

Shibayama says he now loves his job, and because "Tsukiji's countdown has finally started," he wrote about his life experiences in a book called Arigato Tsukiji, or "Thank you, Tsukiji."

One of the few women gutting fish at the market, who only agreed to speak anonymously for fear of retribution (along with many other market workers), says, "I've been here a long time. This is where I want to be. If we go there, we don't know if our fish will sell at all, if customers will come. Transportation isn't convenient."

Harvard professor Theodore Bestor has studied and written extensively about Tsukiji. He says, "I don't know anybody that thinks this is the best thing to come to the market."

Bestor says the question now for the traders is how to adapt to the upcoming changes, even though no one really knows what those changes might be.

"For everybody involved, this is an existential crap shoot," he says.

Shibayama, the longtime fish seller, was originally opposed to the move but admits that Tsukiji has aged, and workers just have to get used to the idea.

"Tsukiji was great," he says, "But I want to people to say the same thing about the new market, too. What matters will still be there: the fresh fish and the people who know how to buy and sell it."