Accessibility links
A Photo Series Exposes Yucky, Kooky Food-Styling Tricks : The Salt A photo series exposes the cheats food stylists use to make dishes look so scrumptious in glossy magazines and cookbooks. Roasted meats are glazed with motor oil, and milk is replaced with glue. 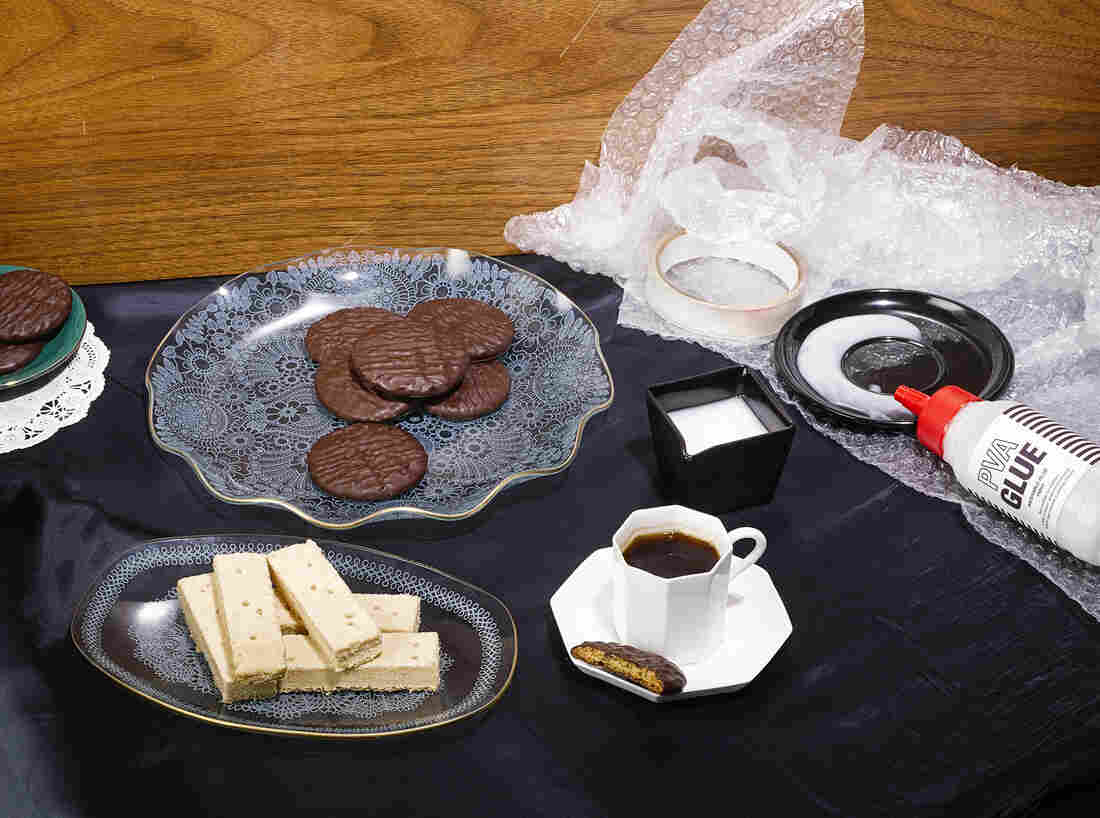 That's not milk but PVA glue, says Sandy Suffield, the art director behind the photo series Faking It. "That's actually a common trick used when people are shooting cereal. Because with real milk, the cereal will get soggy." Courtesy of Sandy Suffield hide caption

So, maybe your Instagram pics of #delicious #foodporn never look nearly as scrumptious as the real thing.

Don't despair — it's not you. It's just that your food is too real.

Professional food stylists use all sorts of cheats to make their dishes appear perfectly delectable on camera — often incorporating completely inedible ingredients. They garnish roasted meat with motor oil to make it glisten just so, redden fruit with lipstick and sub in glue for milk. They stash tampons soaked in hot water behind food to make it appear steaming hot.

In their online series Faking It, U.K.-based art director Sandy Suffield, along with photographer Dan Matthews and food stylist Jack Sargeson, expose and poke fun at some of this trickery. Their photos imagine what lies just outside the frame of the food photos you'd find in glossy magazines and best-selling cookbooks.

"These days, there's a sort of voguish thing for food that looks beautifully disheveled," Suffield says. "So food photographers are perhaps 'faking it' a bit less these days."

But in the days of analog cameras and pre-Photoshop, when photographers depended on big, hot studio lights that would melt or discolor foods, stylists had to get creative to make food look good, Suffield notes. "So for our shoot, we used some of the tricks from that era," she says. "And we even styled it to look a bit '70s."

Suffield researched the kookiest tricks of the trade, and got Sargeson to help her whip up some of the fake dishes featured in the photos. "It's just really funny," Suffield says. "It's funny how amazingly unappetizing some of this food really is."

We asked Suffield to walk us through how she created the deliciously fake foods in the series. 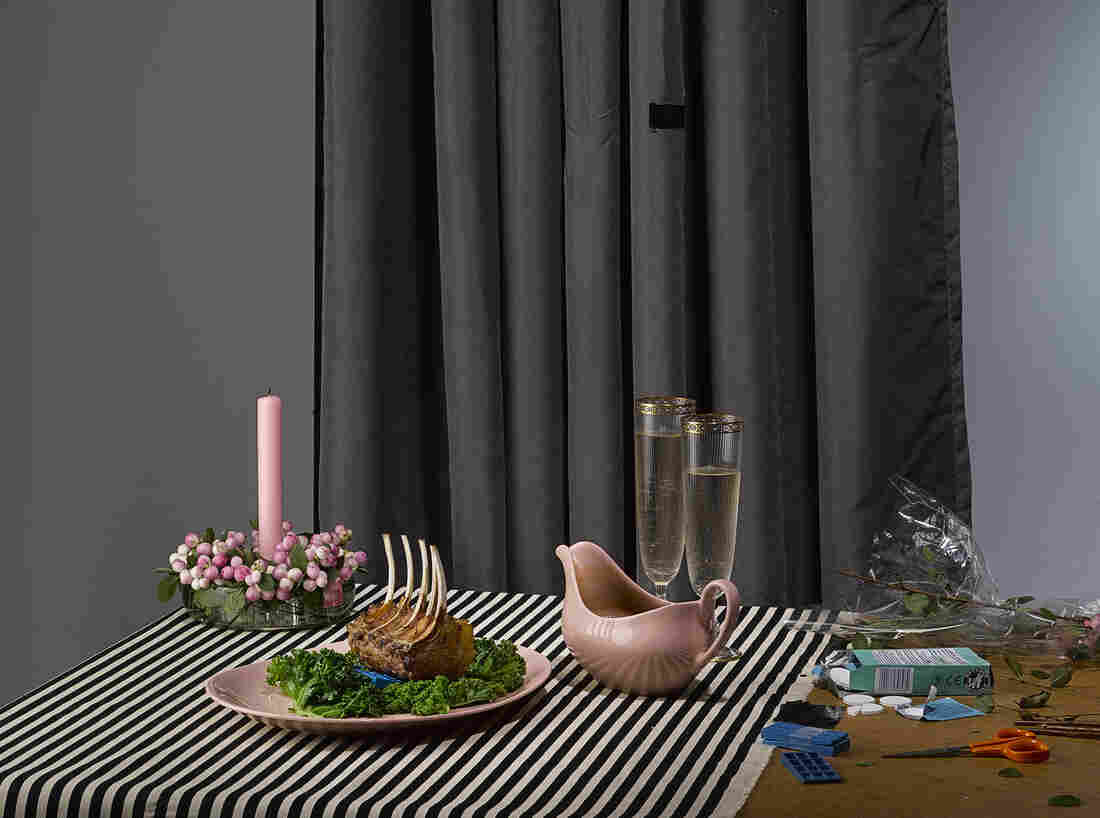 In the old days, food stylists would make fake champagne "out of water, soy sauce and Alka Seltzer — so that's what we did here," Suffield says. "And then you can see we used little plastic blue things for artfully propping up the food." 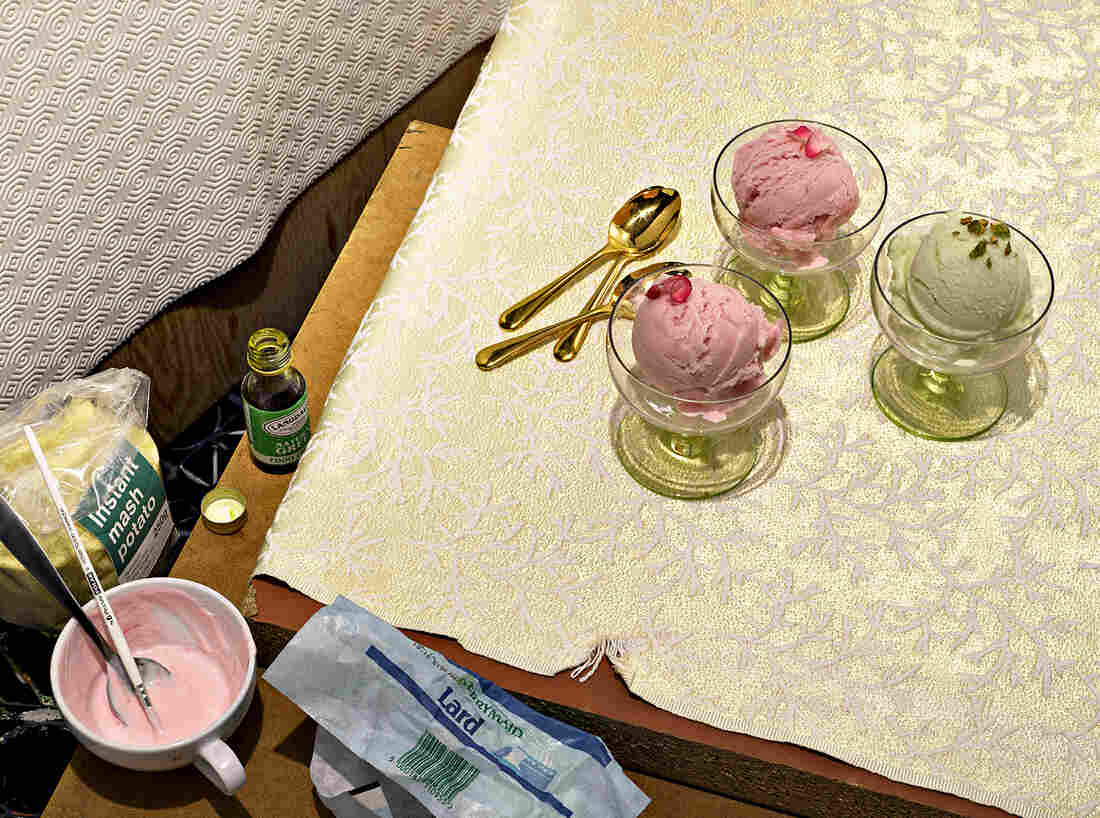 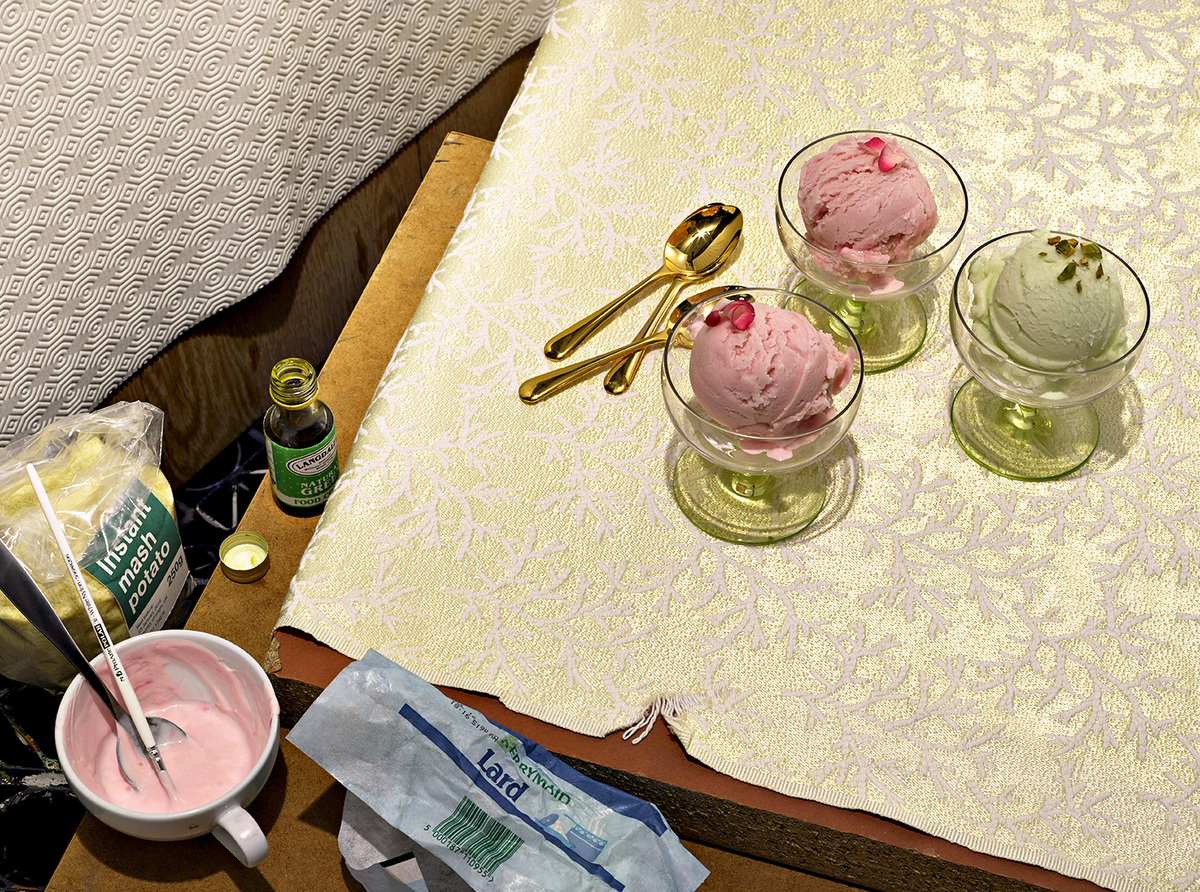 "Normally, they'd use instant mashed potatoes to make fake ice cream, which wouldn't melt under the hot studio lights — but we actually didn't end up using that method," Suffield says."Instead, Jack made that ice cream out of lard, powdered sugar and food coloring. And where the ice cream touches the glass and begins to melt, he made this substance — I think using just powdered sugar, water and food coloring — that's a different viscosity, it's a bit thinner. And he just painted that in."

"I think the level of detail here makes it all funnier," she says. 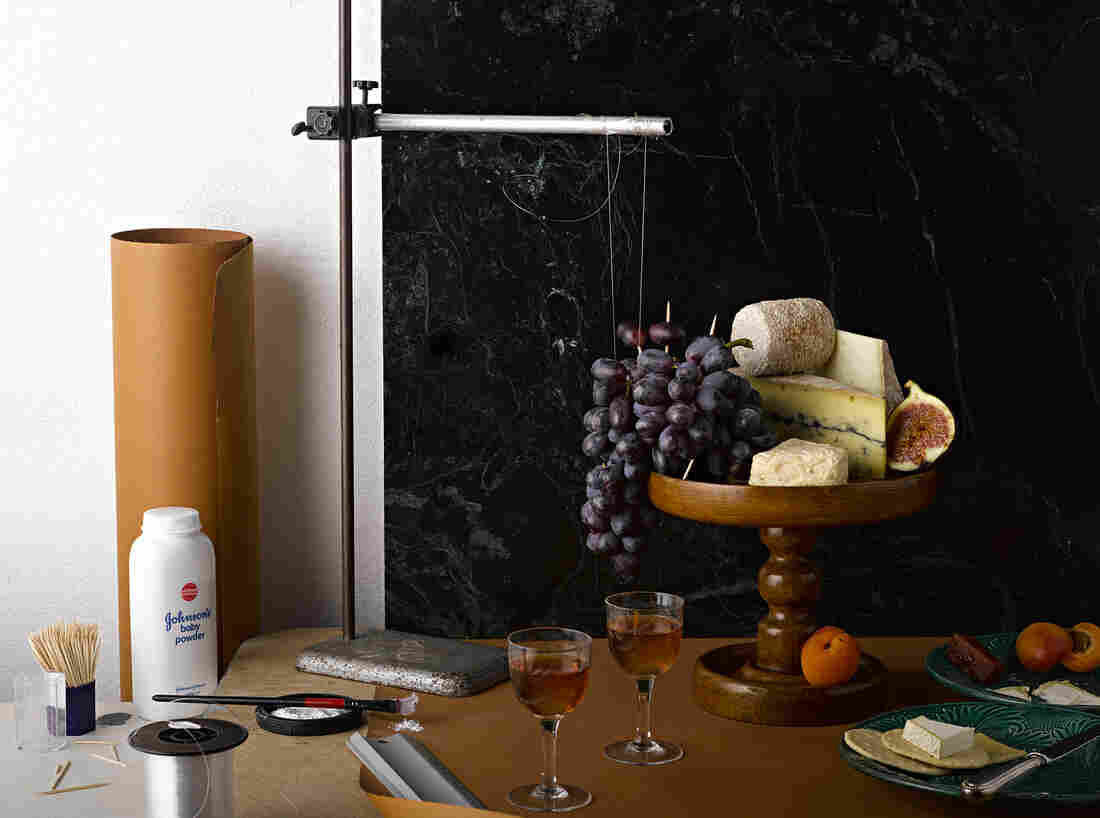 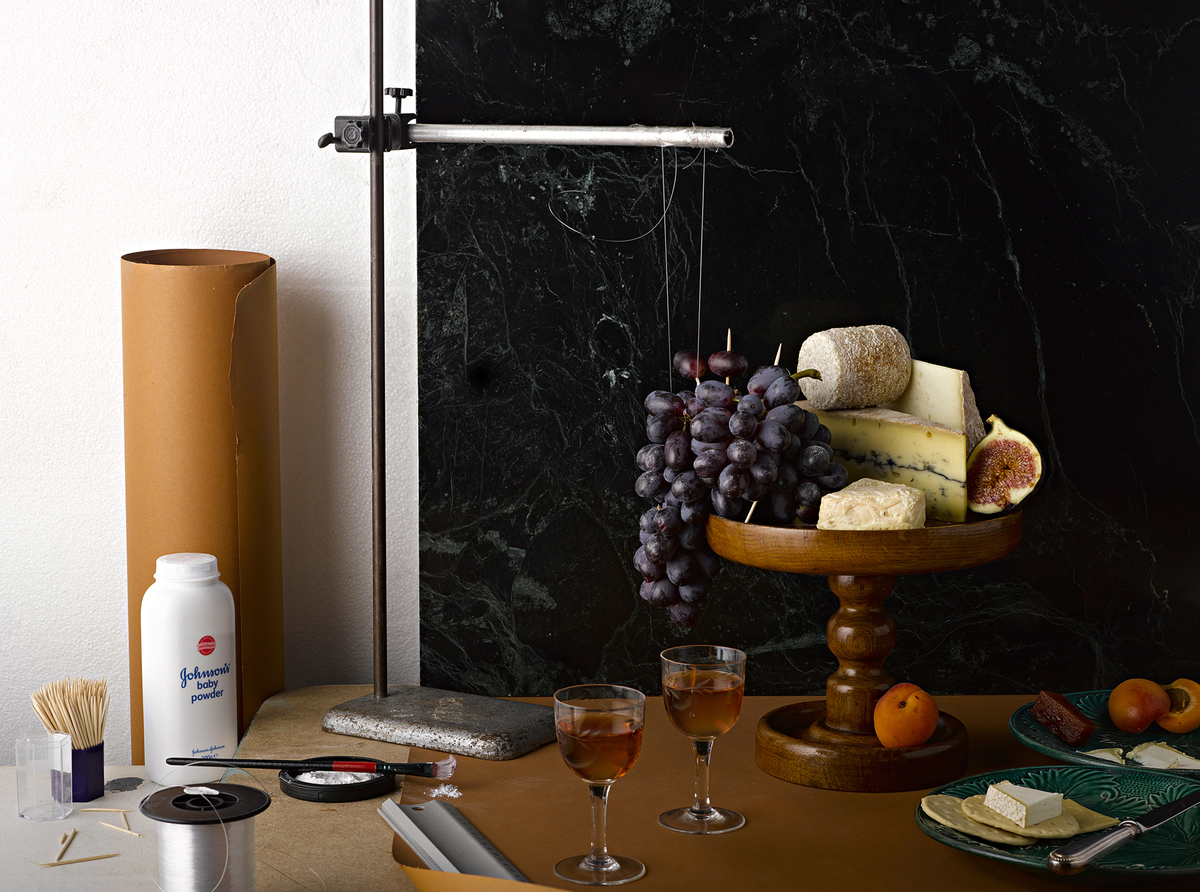 "The grapes have a bloom — just that really lovely, blue-ey, dusty look — that's created with talcum powder.You'll also notice lots of exposed toothpicks, and that's just so the grapes look tastefully composed.The fishing wire is there for the same reason." 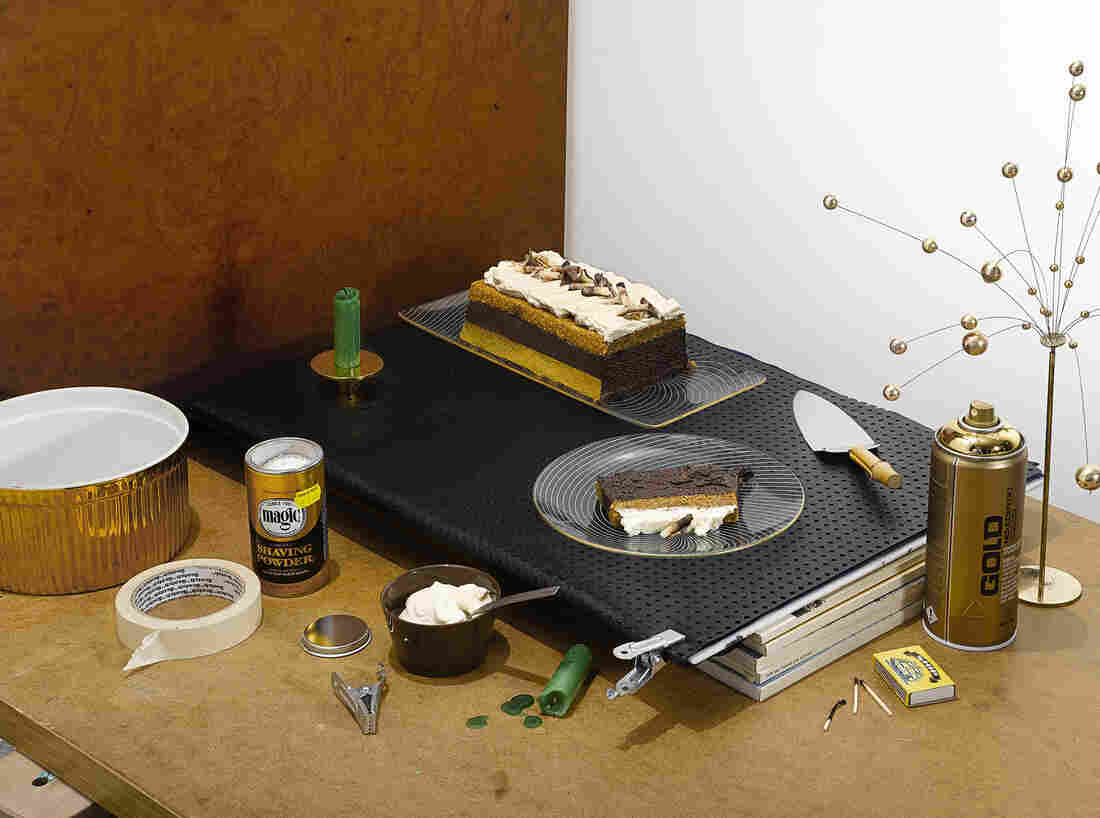 "Instead of edible gold leaf, we just used spray paint to decorate the cake. And that shaving powder is used to make the cream, which won't melt as readily as real cream." 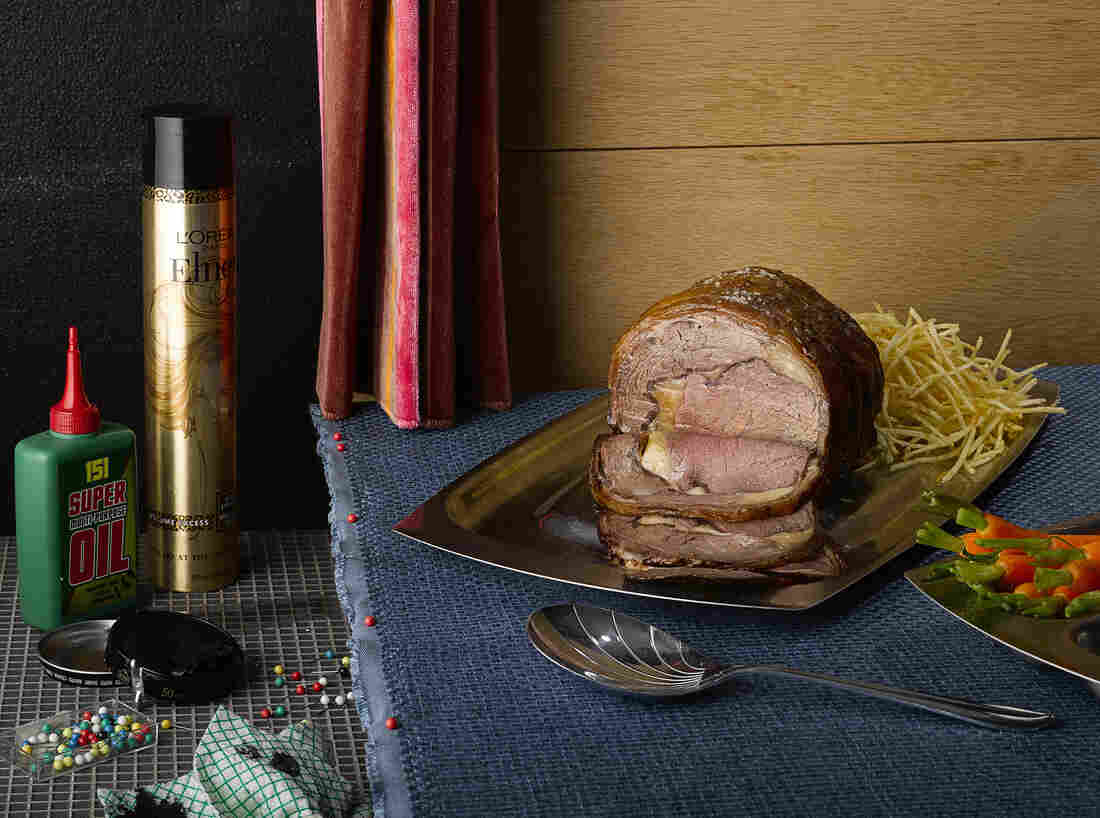 "The motor oil is used to baste the meat, to make it shiny. And you'll also notice there's some boot polish in the shot — that's used to darken the meat if it looks too red. And then the hairspray is used to give a gloss to the carrots."