Accessibility links
Adopt A Beehive — Save A Beekeeper? : The Salt Many of the foods we eat depend on pollination from honeybees. But bees are in trouble, and so are beekeepers — replacing lost hives is expensive. Some have come up with a new source of funding. 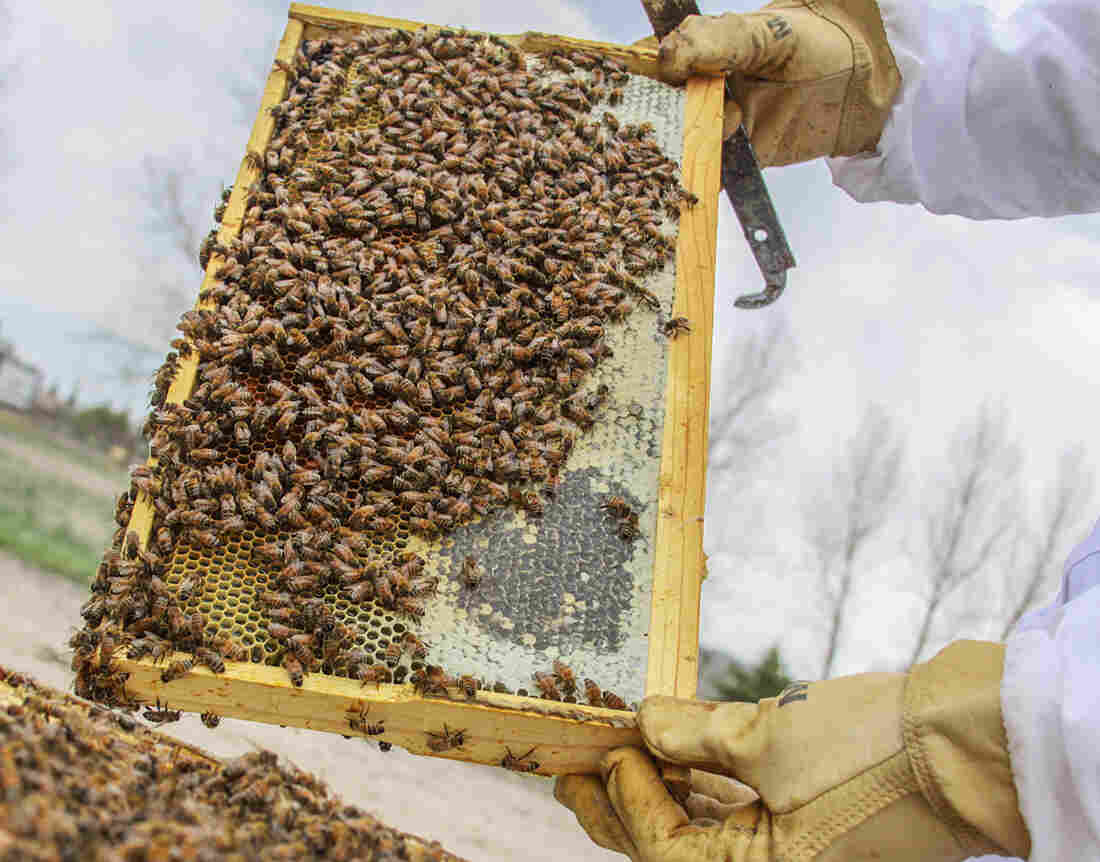 A beehive at Frangiosa Farms, in Parker, Colo. The farm introduced an adopt-a-hive program in 2012. The one-time adoption fees per hive range from $45 to $130 (the latter gets you three jars of honey). Courtesy of Nick French/Frangiosa Farms hide caption

Beekeeper Nick French never knows what he'll find when he opens up his hives for the first spring inspections. Of the 40 hives he manages in Parker, Colo., French loses about one-quarter of his colonies every year.

"I work all summer long to raise healthy bees, but there are no guarantees they'll make it through the winter," says French, founder of Frangiosa Farm.

Recent years have been especially hard on beekeepers. The latest research shows that beekeepers have lost almost a third of their hives over the winter — and replacing them is expensive. "Losing bees is like watching dollar bills fly out the window," says Tanya Phillips, beekeeper and founder of Bee Friendly Austin.

A few creative beekeepers have come up with a new source of funding: They're inviting bee supporters to "adopt a hive."

Most programs operate with similar models. Adopters pay a fee in exchange for honey from their "adopted" bees and an adoption certificate acknowledging their support.

The Adopt A Bee program at Frangiosa Farm was introduced in 2012. The one-time adoption fees per hive range from $45 to $130 (the latter gets you three jars of honey). French signed up 25 adopters the first year; last year, the number of adopters jumped to 300.

Adopting a hive is about more than increasing honey sales — it's a matter of survival, says French.

"In any other industry, you'd go out of business with the kind of losses beekeepers experience," French says. "I couldn't keep going without community support."

The programs take advantage of public concern and raise awareness of the plight of bees.

Beekeepers are experiencing average annual losses of more than 30 percent, according to Bee Informed Partnership, a nonprofit collaboration of universities and research labs studying honeybee losses.

In managed colonies (hives raised by beekeepers), losses can be caused by a number of factors, including parasites, pesticides, loss of forage and colony collapse disorder, according to David Tarpy, a professor and extension apiculturist for North Carolina State University. 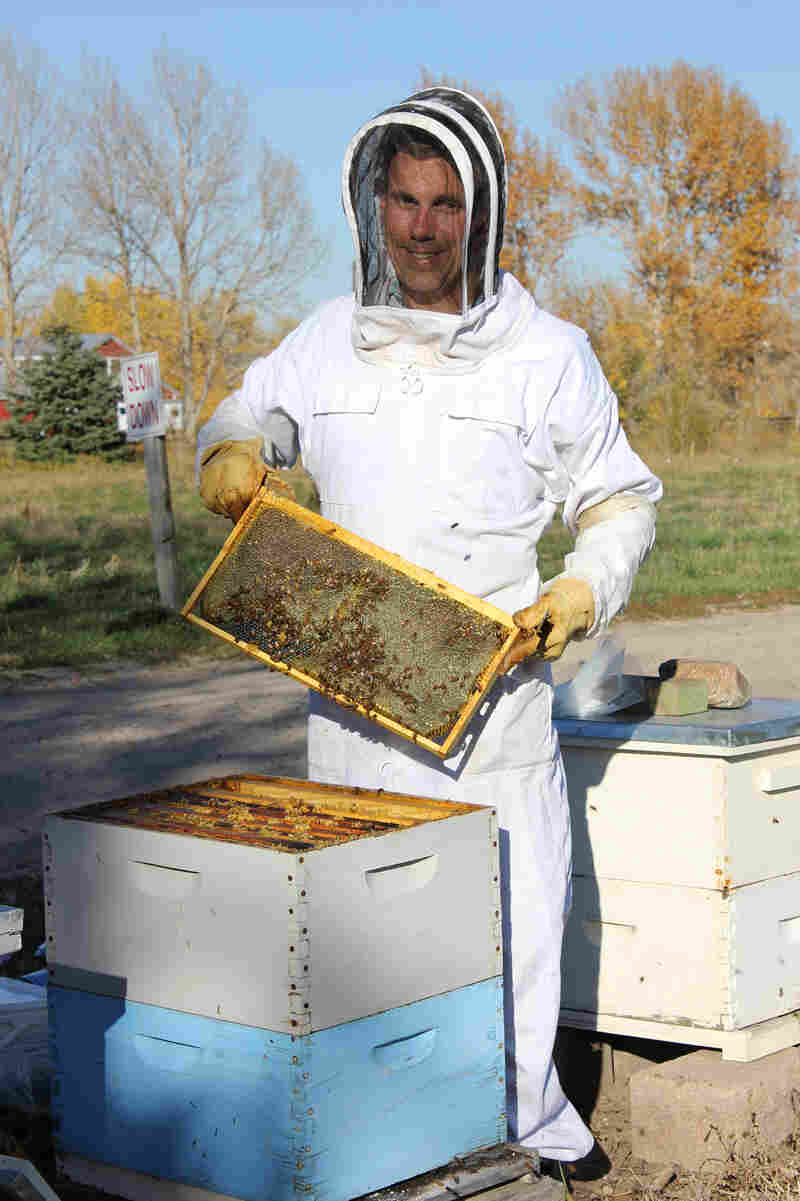 Beekeeper Nick French of Frangiosa Farms loses about one-quarter of his colonies every year. Last year, he had 300 adopters sign up for his farm's adopt-a-bee program. Courtesy of Nick French/Frangiosa Farms hide caption

Bees are essential to the health of the food supply. More than 100 different crops — about one-third of the foods we eat — depend on pollination from bees and other pollinators. While native bees do some of the work, it's honeybees that do the bulk of the pollination for agricultural crops.

"Honeybees provide a service that native bees cannot," Tarpy says. "And beekeepers face uncertainty every single year about whether or not they'll have enough bees to match pollination demands."

Of course, beekeepers can add more bees, but the options come at a great expense.

Packages of bees to populate a new hive are upwards of $100 per hive. Splitting the bees from an existing hive into two new hives is free — but it curbs honey production as bees work to populate their new colonies and boost honey stores.

And when infectious diseases like American foulbrood strike, beekeepers often burn affected hives to prevent it from spreading, triggering expenses for new equipment.

The concept of adopt-a-hive programs is catching on. In addition to the four-year-old program at Frangiosa Farm, there is a similar initiative at University of Hawaii, Hilo.

In Jacksonville, Fla., the Bee Friends Farm program promises adopters will make 60,000 new friends when they adopt a hive for $35. The fee covers adoption benefits like a bottle of honey, adoption certificate and a photo of a hive with the adopter's name on it.

Bee Friendly Austin introduced an Adopt-a-Beehive program this spring. Rather than use the $49 adoption fee to cover the cost of her bee losses — which Phillips estimates are just between 5 and 10 percent of her colonies per year, thanks to the temperate Texas climate — Phillips plans to use adoption fees to support new beekeepers. The fees from all hive adoptions will be donated to the launch of a local master beekeeper program.

"The only way to help the bees is to teach people how to raise them right," Phillips says. Without the additional financial support, beekeepers would be forced to raise the price of honey to offset the costs of colony losses.

The combination of support for bees and beekeepers alike make Tarpy a fan of the programs.

"It's a powerful means of giving everyday citizens a chance to support our beleaguered honeybee population by supporting those who manage their colonies," he says. "It's a lot easier to replace bees than to replace beekeepers."