Accessibility links
Your Quinoa Habit Really Did Help Peru's Poor. But There's Trouble Ahead : The Salt Headlines once warned the global quinoa boom was putting the nutritious crop out of the reach of those who grow it. New studies put those fears to rest. But bad news may loom for Andean farmers. 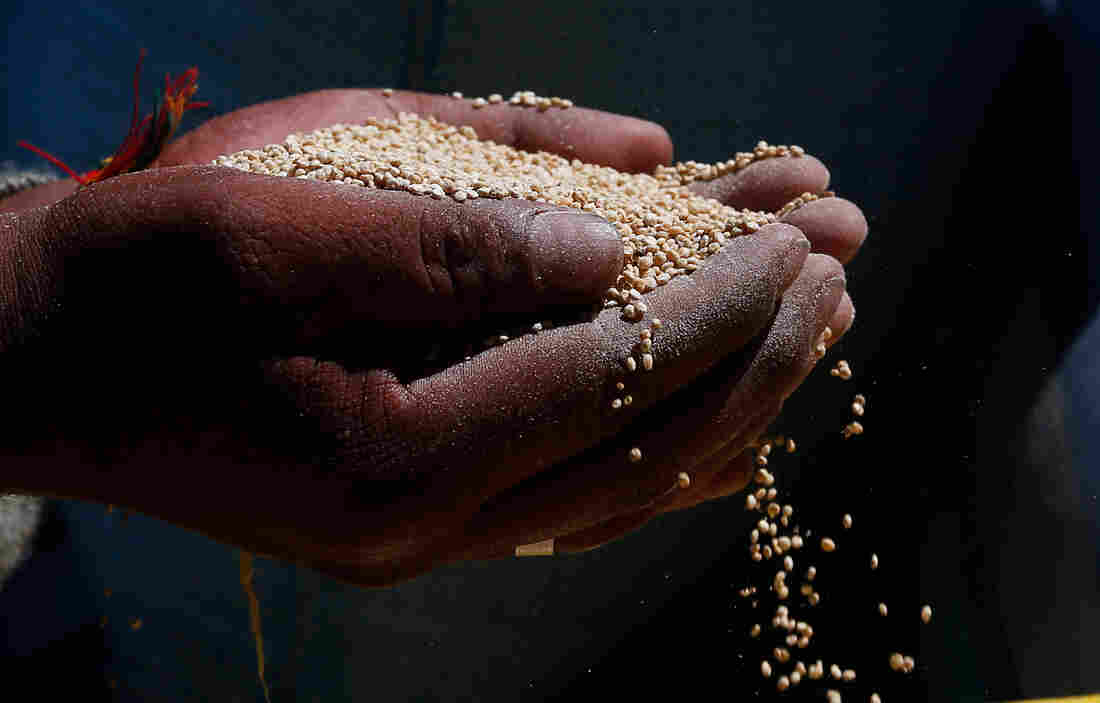 A man holds Peruvian quinoa. New studies of detailed data gathered by Peru's government find that the global quinoa boom really was good for Peruvians — both those who grow it and those who eat it. Juan Karita/AP hide caption

The price of quinoa tripled from 2006 to 2013 as America and Europe discovered this new superfood. That led to scary media reports that the people who grew it in the high Andes mountains of Bolivia and Peru could no longer afford to eat it. And while, as we reported, groups working on the ground tried to spread the word that your love of quinoa was actually helping Andean farmers, that was still anecdote rather than evidence.

The lack of evidence didn't seem right to Marc Bellemare, an agricultural economist at the University of Minnesota, or Seth Gitter, another economist at Towson University in Maryland. They hadn't met, but Gitter knew of a data source that could provide solid evidence, and the two teamed up. They recently published their results in a working paper.

The data source is ENAHO, the national survey of about 22,000 randomly selected households that the government of Peru carries out every year and that covers a huge range of information about what households grow, spend and eat.

"ENAHO is very rich," Bellemare tells The Salt, "but it is a beast to work with."

He and Gitter enlisted Johanna Fajardo-Gonzalez, a Ph.D. candidate at the University of Minnesota, to clean up 10 years' worth of data, which covers the boom and a few years before prices started to climb.

They split the households into three groups: those who grow and eat quinoa, those who eat it but do not grow it, and those who neither grow nor eat quinoa. All three showed a clear rise in their welfare — measured as the total value of goods consumed — as the price of quinoa rose. That reflects increasing living standards in Peru. But at the height of the boom, the welfare of quinoa growers increased more rapidly than that of the other two groups.

As for people who eat but don't grow quinoa? They are roughly twice as well-off as those who grow it. The amount they bought dropped slightly, but not much. They could still afford it, even at the height of the boom.

The working paper does not mince words: "The claim that rising quinoa prices were hurting those who had traditionally produced and consumed it [is] patently false."

"It's really a happy story," Seth Gitter tells us. "The poorest people got the gains." Rich people had to spend a bit more, and did.

While economists are perfectly happy with the idea that the value of goods people consume is a reasonable measure of their welfare, it does miss some important factors, like nutrition. Perhaps, as scaremongers suggested, poor farmers were selling quinoa they might have eaten and buying cheaper but nutritionally inferior foods with the proceeds, consuming more but worse food.

A slightly trickier proposition is that when the price of quinoa goes up, people for whom it is culturally important pay more and so have less to spend on other cheap but highly nutritious foods.

Both ideas proved to be unfounded.

Andrew Stevens, a doctoral candidate at the University of California, Berkeley, took the same ENAHO survey data and focused on the Puno region in the Andes, which grows more than 80 percent of the quinoa in Peru. His results have been submitted to the journal Food Policy. 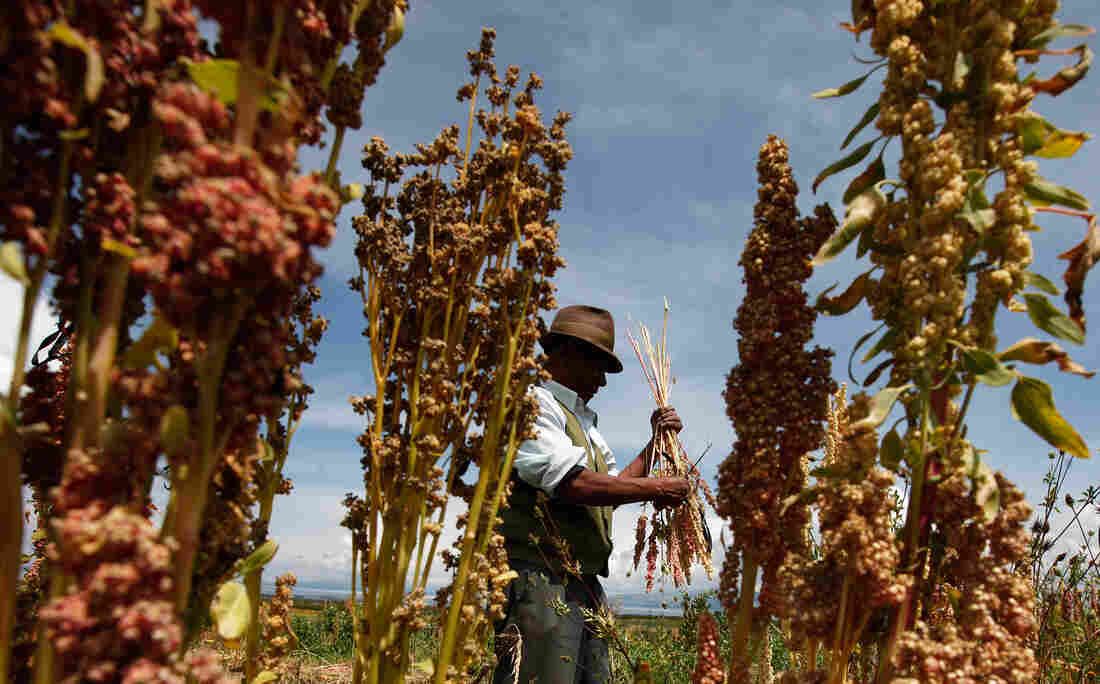 A Bolivian farmer harvests organic quinoa in his fields in Puerto Perez, Bolivia. Some researchers are working with quinoa farmers in Bolivia and Peru to try to develop internal markets for threatened varieties — for example, in hospital and school food programs. Juan Karita/AP hide caption 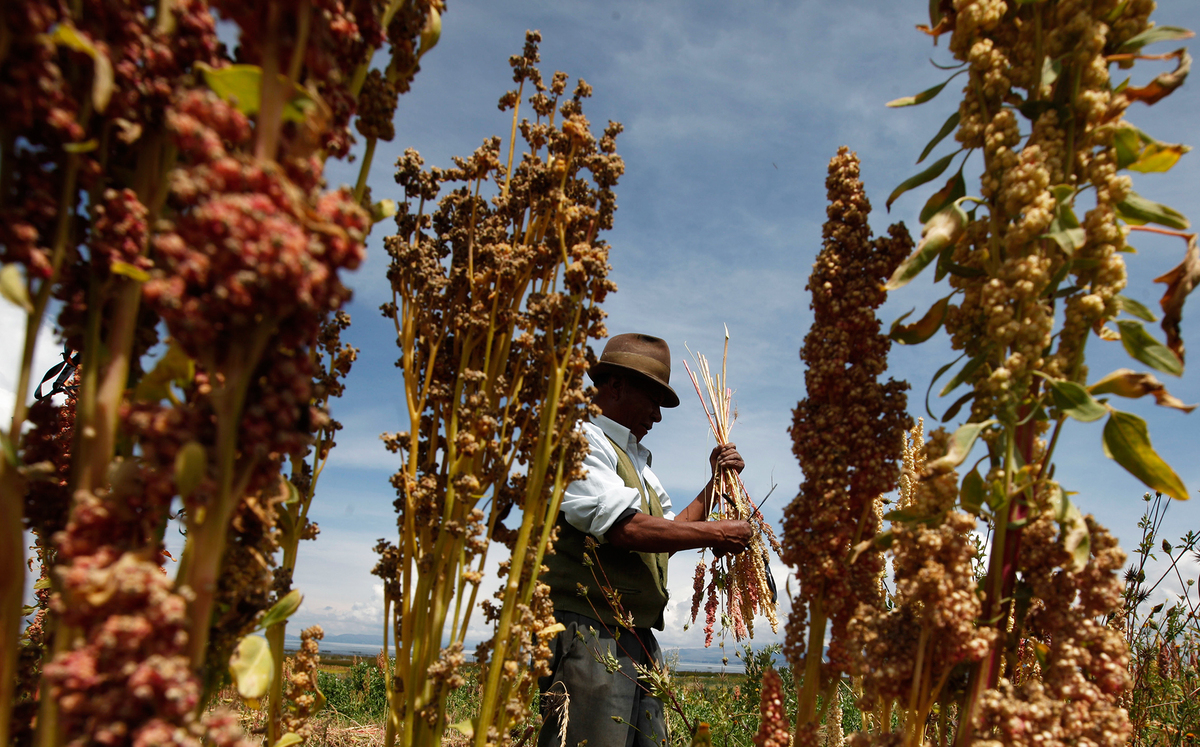 A Bolivian farmer harvests organic quinoa in his fields in Puerto Perez, Bolivia. Some researchers are working with quinoa farmers in Bolivia and Peru to try to develop internal markets for threatened varieties — for example, in hospital and school food programs.

Quinoa is clearly important to the people of Puno, both culturally and nutritionally, but it was just one of 161 food items for which the survey provided data. Stevens found that across Peru as a whole, people ate less quinoa, down from 6.07 kilograms a year in 2004 to 4.09 kilograms a year in 2012, reflecting the rise in price. In Puno, however, people ate slightly more quinoa — 23.62 kilograms versus 22.22 kilograms — despite the price increases, which were even greater in Puno than in the rest of the country.

"Households [in Puno] did not cut back their consumption between 2004 and 2012 despite a fourfold price increase," Stevens tells us.

In addition, Stevens found no sign of changes in calories, protein or carbohydrates in the diet across Peru as a whole. In Puno, there was a suggestion that households cut high-fat foods — already lower in Puno than elsewhere — to continue eating more expensive quinoa.

"However," Stevens says, "the size of this effect is quite small and should be of little concern to policymakers."

Quinoa is culturally important, but unlike rice, wheat and maize, it is not a staple food. Even in Puno it represents less than 4 percent of the household budget, and elsewhere in Peru less than 0.5 percent.

Overall, the global price rise for quinoa was a good thing for people in Peru, especially quinoa farmers, and had no bad effects on nutrition.

Marc Bellemare says he is "absolutely not surprised," because "at least in the short run, if you are a net seller of something and the price goes up, you benefit."

Adam Drucker, a senior economist at Bioversity International in Rome, who was not involved in either study, is also not surprised.

"It's pretty much in accordance with what we found a few years ago," he says, in admittedly less detailed studies in Bolivia and Peru.

In the long run, however, Bellemare and Drucker also agree that there may be trouble ahead.

Export demand has focused on very few of the 3,000 or so different varieties of quinoa, prompting farmers to abandon many of those varieties.

"Those varieties, created by Andean farmers, are the future of quinoa, to adapt to things like climate change," says Stefano Padulosi, a specialist in underused crops and Drucker's colleague at Bioversity International. He would like to see some sort of global mechanism to reward Andean farmers for their role in creating and maintaining quinoa diversity.

Padulosi and Drucker have been working in Bolivia and Peru to try to develop internal markets for threatened varieties — for example, in hospital and school food programs — and have had some success.

Drucker has also conducted several pilot studies to discover what kinds of incentives farmers need to persuade them to grow varieties that exporters are not interested in but that nevertheless are important to conserve.

"We've shown that it can work, and that it is cost effective," says Drucker, "and the potential to make it sustainable is there."

Peru and Bolivia are interested, Drucker says, but the problem now is to unlock public funds to pay for the conservation of agricultural biodiversity.

Gitter and Bellemare, in a more detailed study that has not yet been published, confirm that the 150 quinoa farmers they interviewed in Puno would be willing to grow and conserve less preferred varieties in exchange for cash.

A greater — and less tractable — problem is environmental degradation. Drucker's student Enrico Avitabile found that more than half the Bolivian farmers he surveyed say their soil is worse than it was before the boom, for two reasons. First, high prices brought into cultivation land that used to be allowed to rest as fallow, resulting in erosion and loss of nutrients. Secondly, farmers who are growing more quinoa, and getting more for it, have reduced their llama herds, so less manure is available as fertilizer and to protect the soil.

Perhaps the greatest problem, though, is what happens when the price drops, which it already has. The cost of quinoa started to fall in February 2014 and sank as fast as it had risen. By late 2015 the cost of quinoa was back where it was in 2012, before the price increases accelerated dramatically.

That, too, is unsurprising. High prices attract competitors. In Peru, farmers in the much more benign Arequipa region on the coast are using intensive methods and fertilizers, and getting double the yields of farmers in Puno. Exports from Peru recently overtook those from Bolivia. Further afield, China, India and Nepal are planting quinoa, as are places in the United States and Canada.