Accessibility links
Cooking For Cancer Patients, Teens Learn More Than Recipes : The Salt The Bay Area-based Ceres Community Project recruits teen volunteers — many of whom were formerly homeless — to cook healthful meals and deliver them to local hospitals. 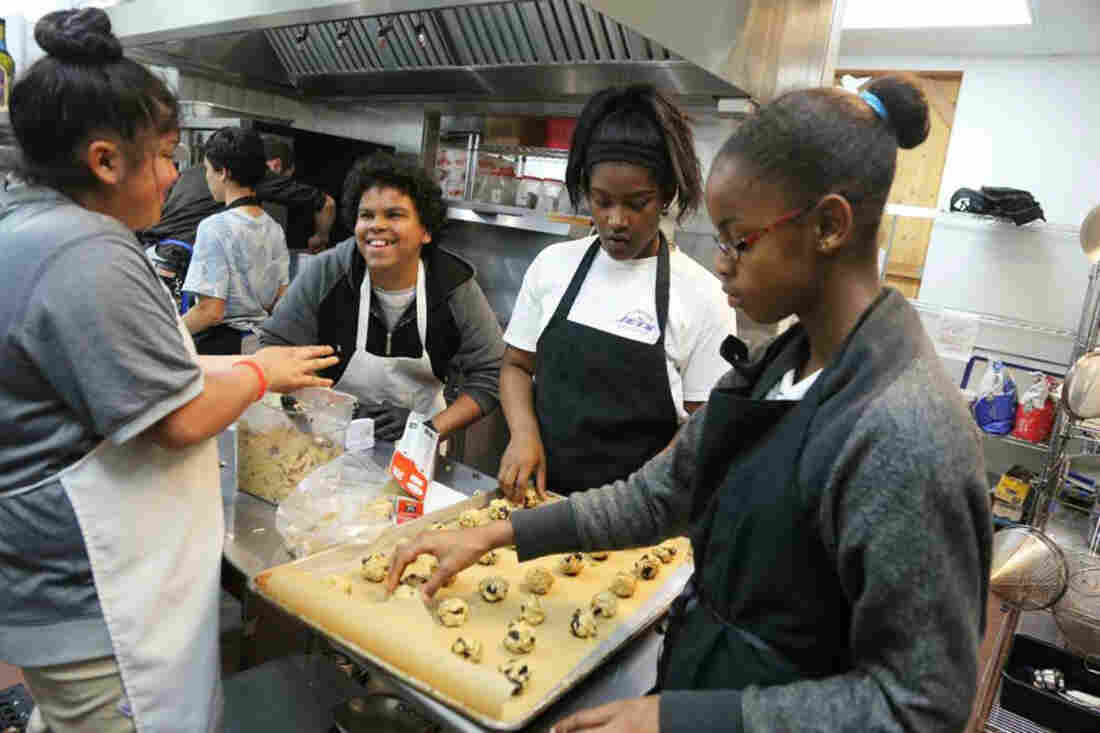 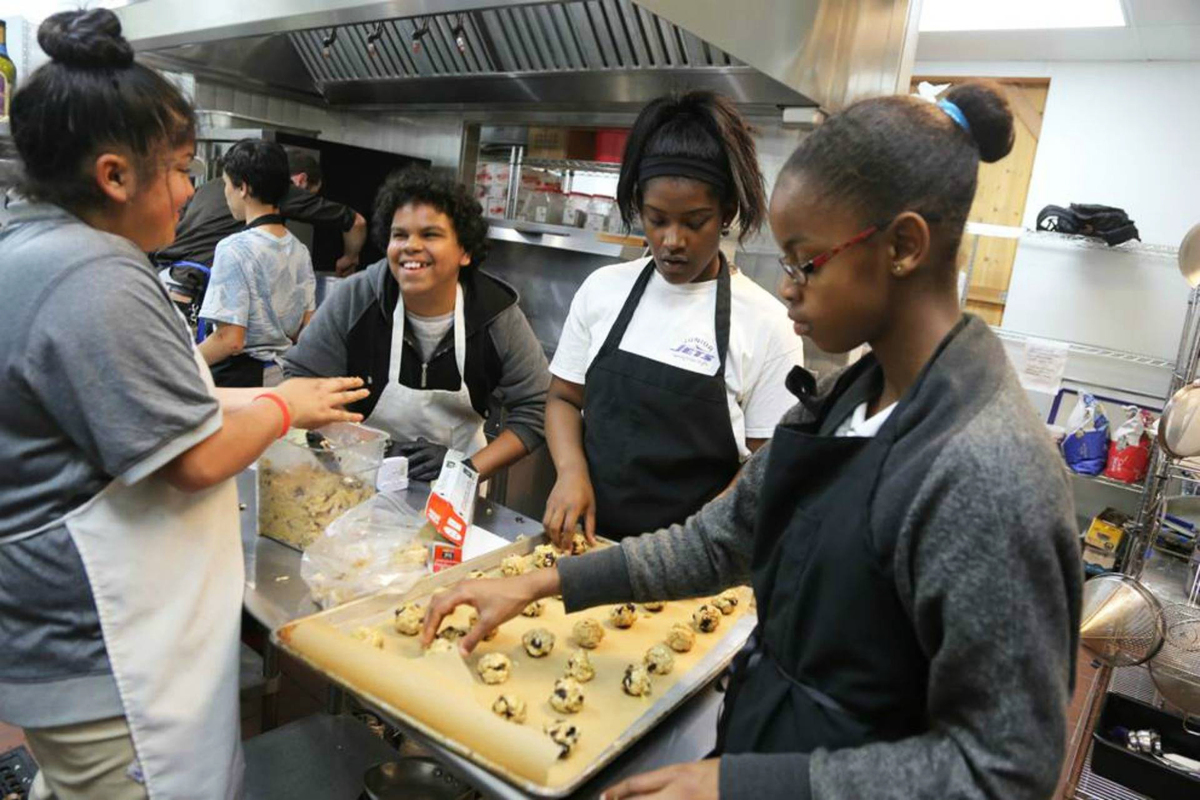 Teen volunteers at the Ceres Community Project meet up after school to cook up healthful meals for patients at local hospitals.

It all started with a simple request. In 2006, Cathryn Couch was working as a chef, making home-delivery meals for clients. One day, a friend called and asked: Did Couch have any cooking jobs for her teenage daughter? She didn't, but the friend persisted. So Couch eventually came up with a project: making meals and delivering them to a local homeless center.

After seeing how excited and proud her friend's daughter was after making the meals, Couch decided to replicate their lesson on a grander scale. That's how, in 2007, the Ceres Community Project was born.

Named for the Roman goddess of agriculture and nurturing, the Bay Area-based program recruits teen volunteers to cook healthful, all-organic meals and deliver them to local patients with cancer and other debilitating conditions.

Ceres Community Project came out with a cookbook. It expanded and opened five branches in counties across the Bay Area. And Couch has helped launch similar programs in cities like Eugene, Ore., and Madison, Wis. Ceres has also partnered with Whole Foods: Stores in certain Bay Area counties now sell salads made by program volunteers, with a dollar from each pint that's sold going back to the organization.

And now, the group has expanded east of San Francisco. In February, the Ceres Project opened up in Alameda, Calif., in conjunction with a supportive housing community called Alameda Point Collaborative. (Much of the funding came from a $100,000 bequest left by a local woman who passed away from breast cancer. Generally, their funding comes from a mix of individual, foundation and in-kind donations.) 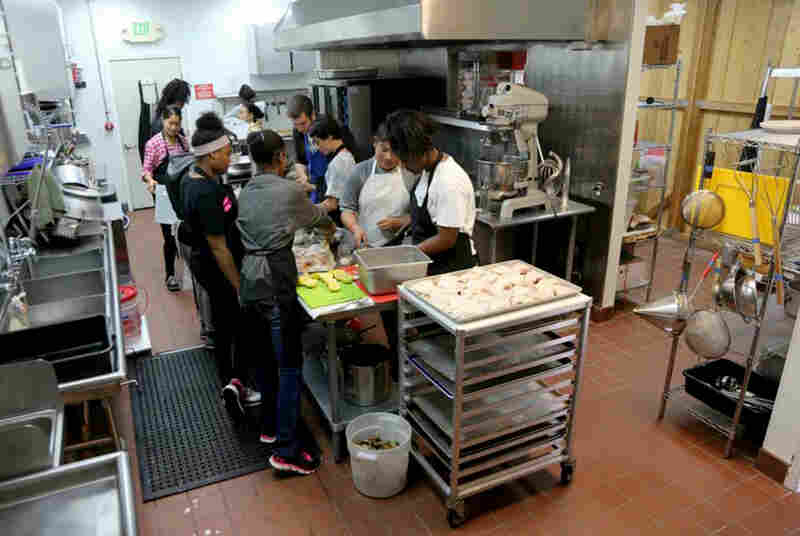 Teens from Alameda Point Collaborative — which offers housing and job training to formerly homeless families that have at least one adult with a permanent disability — cook healthful meals (chickpea pumpkin burgers with date chutney, baked salmon with wild rice) with produce from the on-site garden in an after-school program. Adult volunteers then deliver the meals to the Charlotte Maxwell Clinic in Oakland, a nonprofit serving women with cancer and their families whose incomes are at or below 200 percent of the federal poverty level.

Ceres follows the American Institute of Cancer Research's recommendation that meals should be two-thirds plant-based whole foods, and they don't include any white flour, white sugar or processed foods.

"A lot of the kids, I'm seeing their natural leadership come out in the kitchen," says Aileen Suzara, the Alameda program coordinator and chef. "I see a spark from some of the kids. They have a sense of how this is really touching someone's life."

The program's focus on its teen volunteers comes from Couch's belief in something she once heard from a Buddhist teacher: The most important person in a room is the youngest. 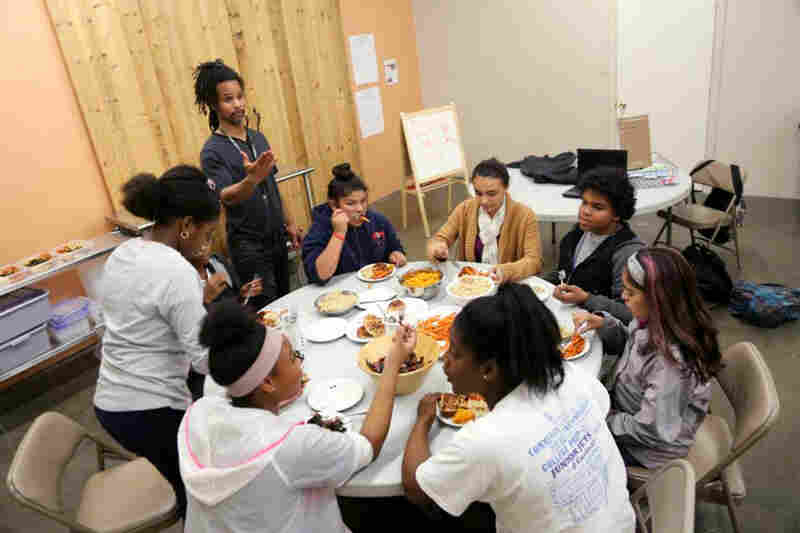 "If we could influence how young people see their relationship with food, if we can make them excited about the impact of their food choices on their own health, on the health of the people that they love and on the planet," Couch says, "then we're going to help raise a generation of people who will help to shape a healthier food system."

But the scope of that impact has been surprising, Couch says. When she first started the program, she assumed that the cooking skills the teens gained would be the most valuable part of the program. But that's not all the kids were learning, Couch says. "It's really about [learning] that they matter in the world, that their choices make a difference, and finding that agency in themselves."

That's especially true in the Alameda program. Many of the teens involved have spent their lives as the beneficiaries of meal services. Providing a services for others, and seeing that they can have a tangible impact, has helped give them a sense of confidence, Couch says.

"I realized that the food was a vehicle for people to feel like they were cared for, that they were part of the community and they were connected," Couch says. "And that is as important a nourishment as what's in the food itself."

Shelby Pope is a freelance writer living and eating her way through Oakland, Calif. A version of this story first appeared on KQED's Bay Area Bites blog.