Accessibility links
This Bakery Offers A Second Chance For Women After Prison : The Salt Together We Bake in Alexandria, Va., supplies granola, cookies and kale chips to local eateries. It's also a job-training program for women — many of whom have criminal records. 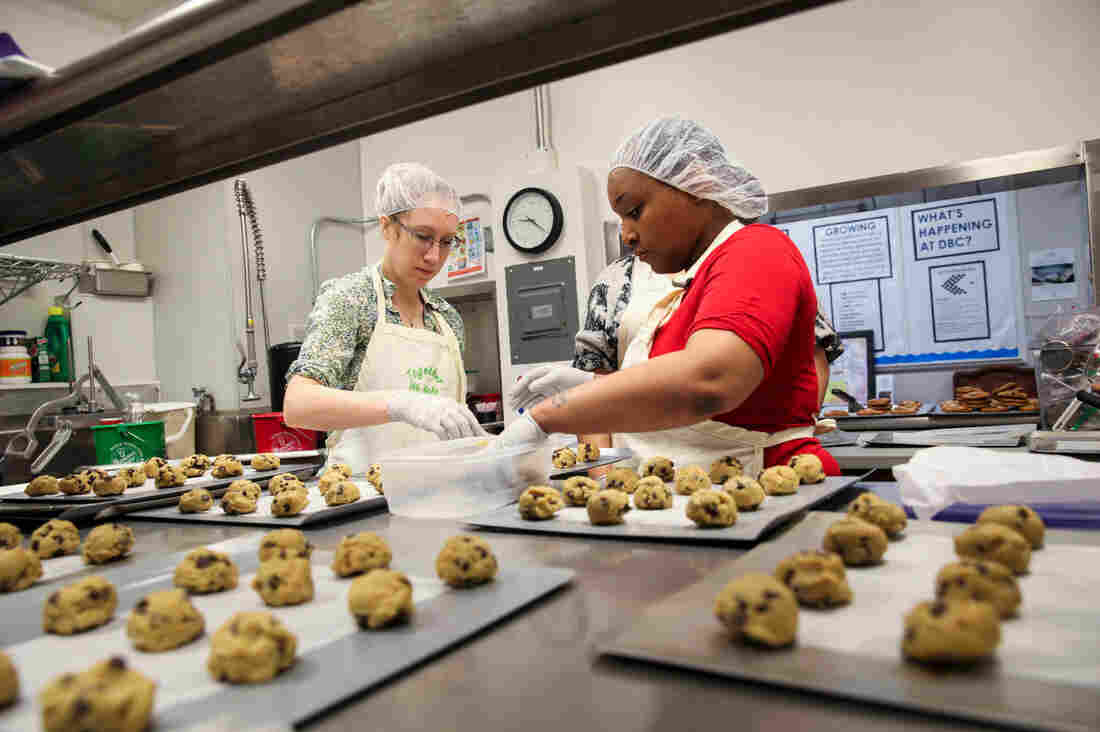 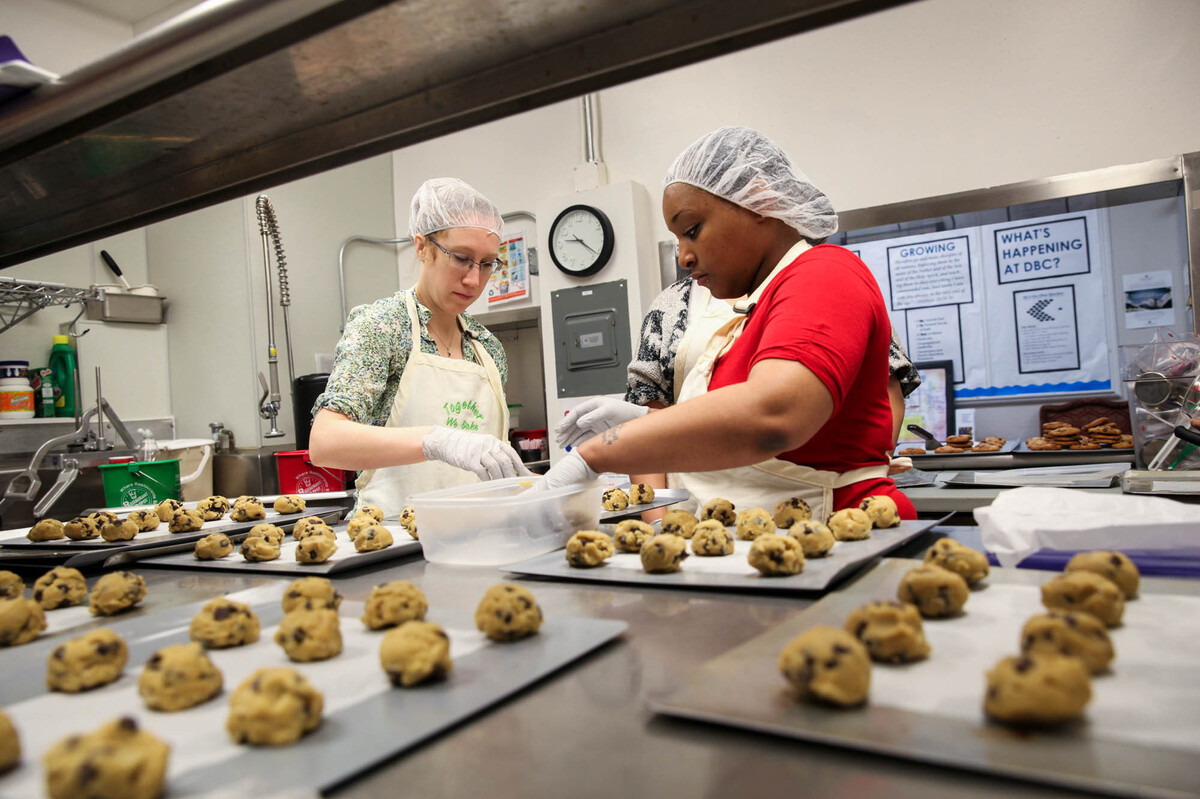 Elizabeth Bennett, director of partnerships for Together We Bake, and Nikki Yates, program participant, place cookie dough they've just made onto baking sheets.

Bonnie Rice was released from prison last year. After a five-year, drug-related prison sentence, she knew she couldn't go back to any of the people who led her into trouble.

"I didn't know where to go, how to go," Rice says with a quiver in her voice. "It was scary." She was completely alone.

She managed to find a place to live in a halfway house. But even though she filled out lots and lots of job applications in the first few months out of prison, she didn't get many calls back. "People look down on you," she says.

Then she found Together We Bake.

It's a bakery in Alexandria, Va., that makes granola, cookies and kale chips for local eateries and a local Whole Foods store. It's also a job-training and coaching program for women who need a second chance — many of whom have served time in prison, or are on probation following criminal charges.

"These women face a lot of obstacles," co-founder Stephanie Wright tells me as we gather in a small church kitchen in Alexandria. I watch as a group of six women work cookie dough with their hands. The kitchen is orderly, immaculately clean — a refuge from the chaos that some of these women have been navigating.

Rice has been in the program for about eight weeks now. She's working toward her Serv Safe certificate, which makes it easier to find employment in the culinary field once her stint at the program ends. 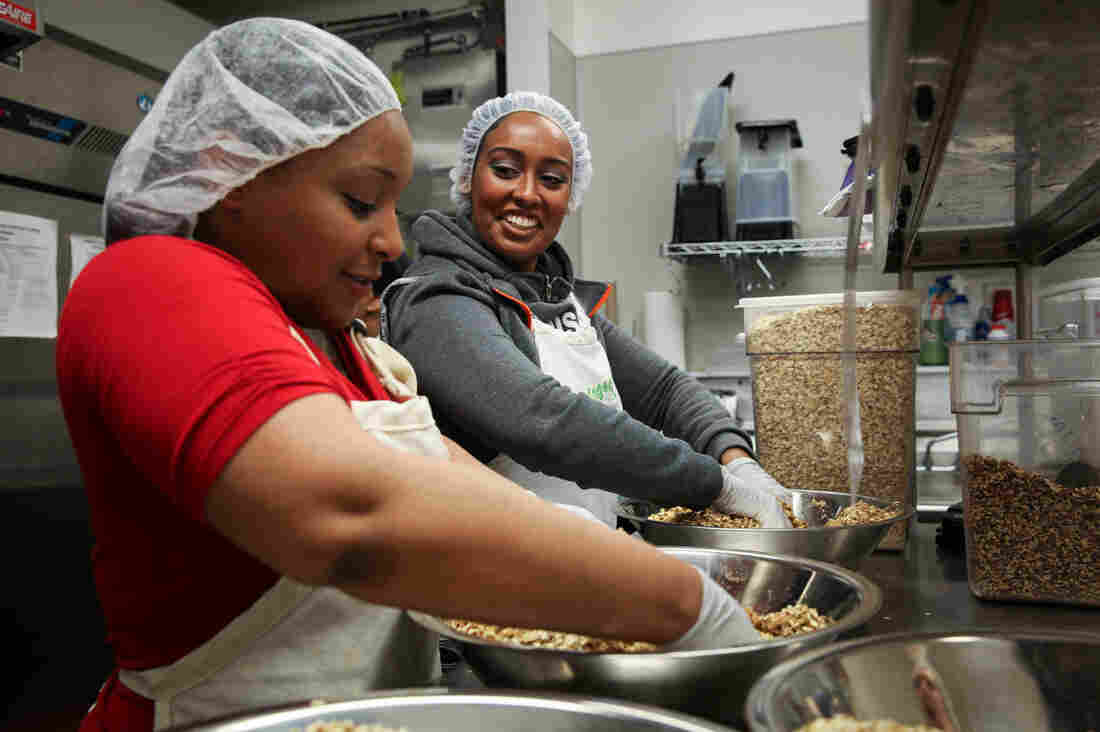 Together We Bake also weaves in resilience training and empowerment classes to help trainees cope with challenges. The sessions are overseen by Wright, who has a background in social work, and they're often led by women who've been through the program.

The curriculum is based on a book titled Houses of Healing, which lays out a mindfulness-based, research-driven approach to help people change their behavior and overcome feelings of negativity and lack of self-worth.

On the day we visited, Colida Johnson, a graduate of the program who is now a group leader, was leading the women through an exercise on how to communicate effectively — with both peers and prospective employers.

"I can dominate and intimidate you," reads a quote in the training guide. "Is this an aggressive style?" Johnson asks. People who are aggressive communicators use language that can violate the rights of others, she points out. So, is there an alternative? How about this: "We are equally entitled to express ourselves respectfully to one another." Johnson directs the women to role-playing, trying out these different styles. 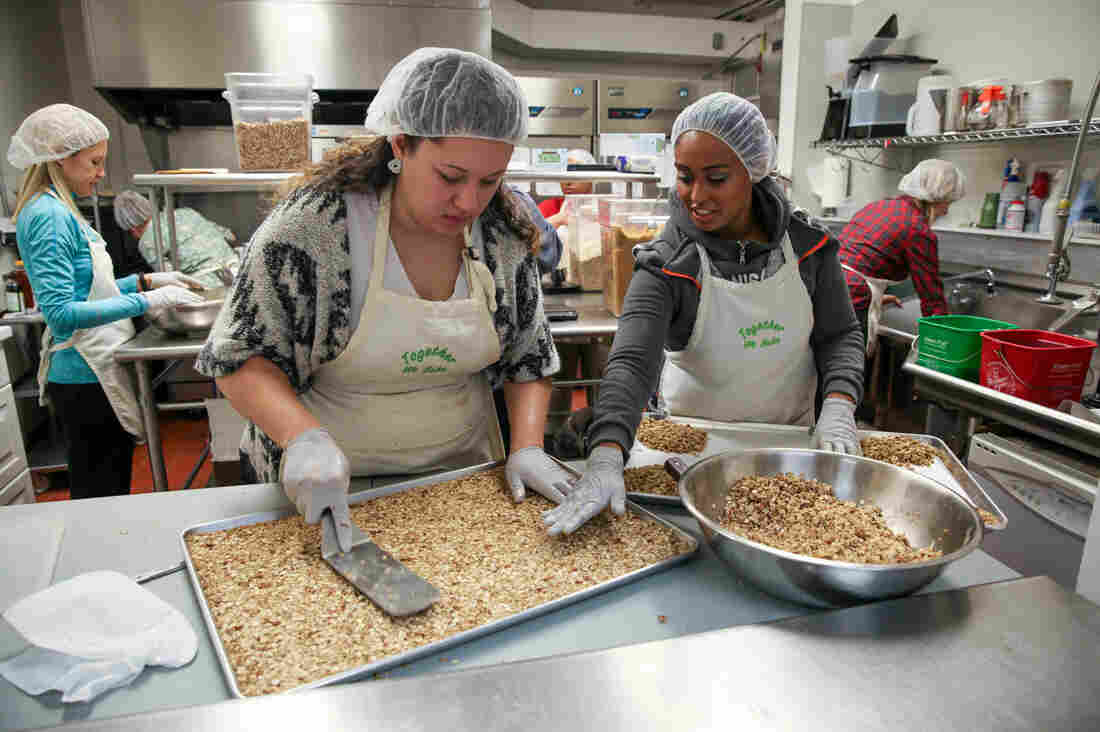 Jenyka Gassnola, an intern, and Hanna Teklu, a graduate of the program and now a program assistant, smooth out the granola before it goes to the oven to bake. Morgan McCloy/NPR hide caption

Wright says the emotional training is key. "The women often need help with soft skills," Wright tells us. In a sense, they're learning to undo some of their old habits and replace them with behaviors that can propel them forward.

Thanks to all the support, Rice says for the first time in her life, she feels her self-esteem rising. "It's like a team, like a family of sisters," Rice says. "The women here at Together We Bake have showed me there's love and respect — and that you are someone."

Wright co-founded Together We Bake in 2012 with her friend Tricia Sabatini, who had been running a successful baking business. "We realized there weren't a lot of services for women [in need], " Wright says. So they combined their expertise and came up with the idea of using baking as a means of empowerment.

So far, Wright says the results are promising. Eighty-nine percent of the women who go through the program pass the Serv Safe exam. And the recidivism rate among the women involved is just 8 percent, according to the co-founders.

There's a complicated relationship between employment and recidivism reduction, says Sam Schaeffer, CEO of the Center for Employment Opportunities, a nonprofit that provides employment services to men and women with criminal convictions. Schaeffer says the model at Together We Bake seems to have "many important hallmarks of ... job training programs that can be successful." (He hasn't visited the program, but I asked him to comment on the model.) 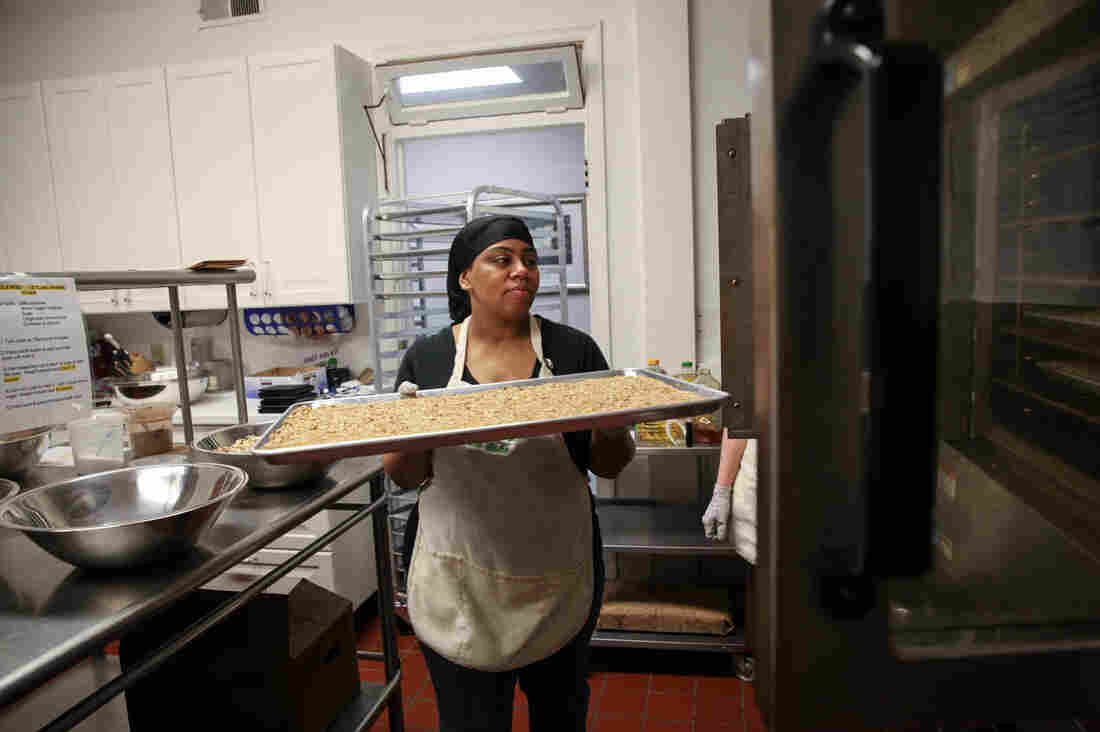 Colida Johnson, a graduate of the program who is now a program assistant, puts granola in the oven. Morgan McCloy/NPR hide caption

The food industry offers an accessible on-ramp to employment — in part because there are so many jobs in food service and in part because these skills can be learned fairly quickly. "Culinary careers are at the top of the employment wish list" for lots of the people looking for employment after prison, Schaeffer notes.

The appeal is broad because you're "working with your hands, and working as part of a team, in a place that can build camaraderie," he adds.

And Schaeffer says he's seeing an increase in the number of employers who are open to hiring people with a criminal background. In part, this reflects a tightening labor market with fewer workers available to hire. Meanwhile, about 20 million Americans have felony convictions, and an estimated 65 million have criminal backgrounds — and many of these people are looking for good work.

There's also a growing movement called Ban the Box, aimed at discouraging companies from asking job applicants if they have criminal records, at least during the initial application process.

There are several food enterprises that have been publicly supportive of employing people with a criminal past — including Butterball Farms in Michigan and Greyston Bakery in New York. 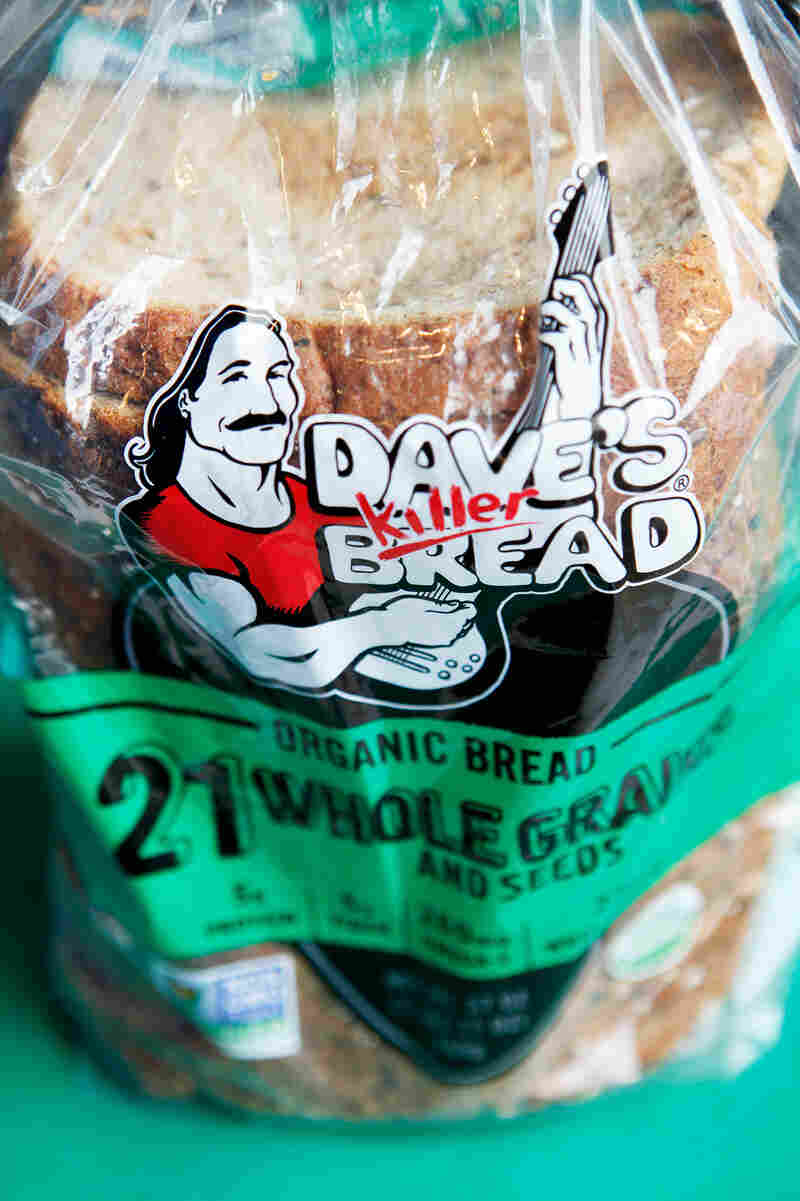 Dave's Killer Bread, an Oregon-based bakery that distributes its products nationally, makes it a point to hire people with a criminal past. Morgan McCloy/NPR hide caption

And perhaps the most vocal in its support is Dave's Killer Bread, an Oregon-based bakery that distributes its products nationally, including at many Costco stores around the country.

The company plays up its story on its labels, explaining that the company's namesake Dave Dahl had spent time in prison. "His brother, Glenn, saw a change in him and gave Dave a second chance by welcoming him back to the family bakery," the bread packaging reads. About 1 in 3 of its employees has a criminal past.

The bakery's commitment to hiring people with criminal backgrounds has led to the creation of Dave's Killer Bread Foundation, which is hosting a Second Chance Summit in New York next month. The summit is aimed at getting more employers to follow their lead. The foundation has curated a set of best practices learned from its experiences employing people after prison.

"We see a powerful connection between successful employment of people with criminal backgrounds and reducing the national recidivism rate, the company's website reads. Some of these workers "can be rock stars" — if given a chance, Genevieve Martin, executive director of the foundation told us by phone.