Accessibility links
Coffee Workers' Concerns Brew Over Chemical's Link To Lung Disease : The Salt A chemical called diacetyl, which is released as a natural byproduct of the coffee roasting process, has been linked to lung disease. A CDC group advises coffee plants to take precautions. 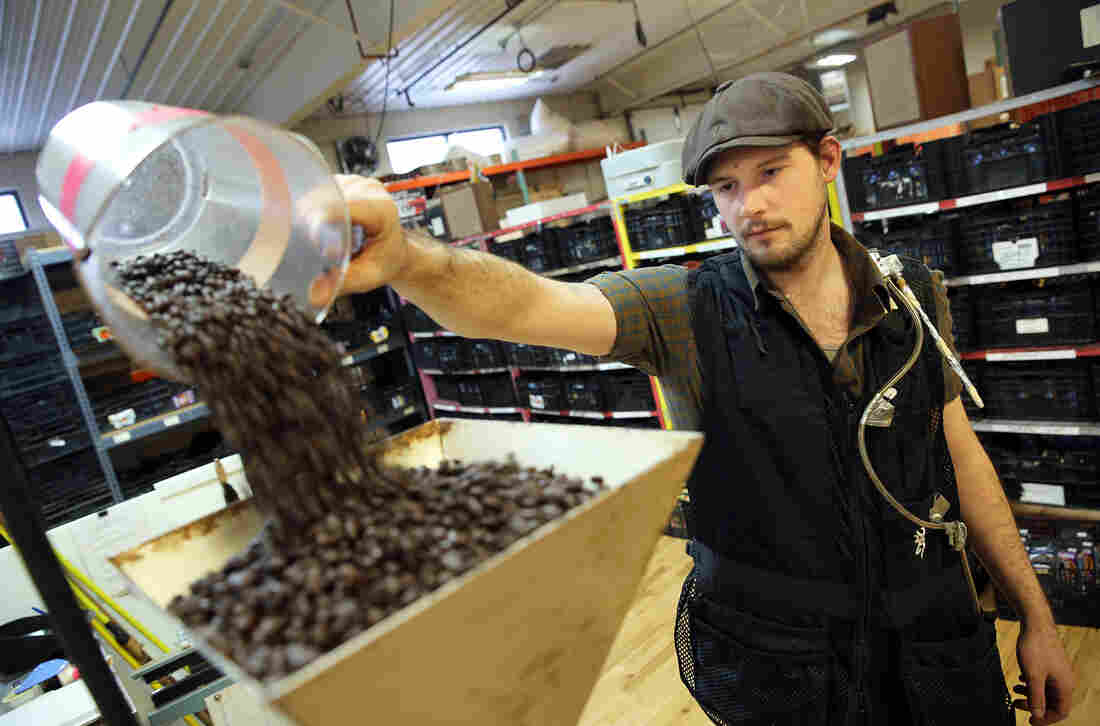 Just Coffee Cooperative's Benjamin Lisser prepares to grind coffee. The glass tube on his vest tests the air in his breathing zone for diacetyl, a chemical byproduct of the coffee roasting process that can cause lung disease. Mike De Sisti/Milwaukee Journal Sentinel/TNS via Getty Images hide caption 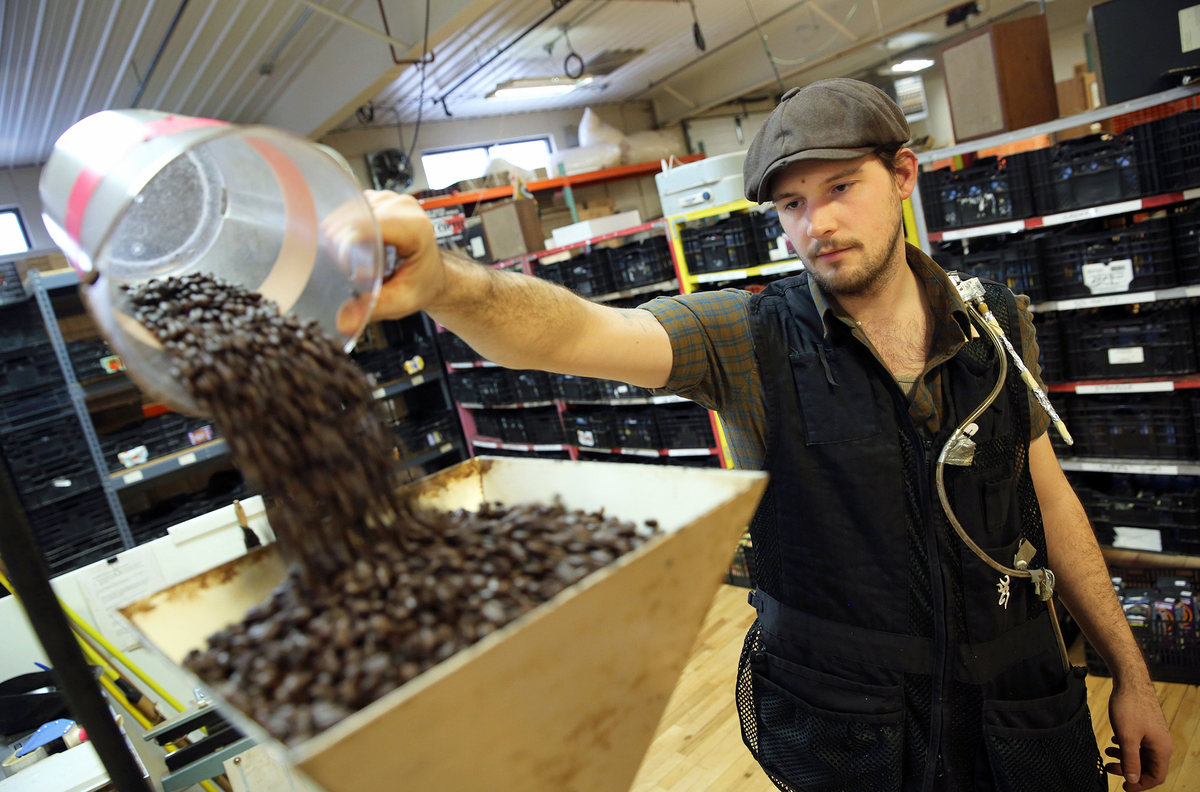 Just Coffee Cooperative's Benjamin Lisser prepares to grind coffee. The glass tube on his vest tests the air in his breathing zone for diacetyl, a chemical byproduct of the coffee roasting process that can cause lung disease.

Step into Mike Moon's Madison, Wis., coffee roasting plant and the aroma of beans — from Brazil to Laos — immediately washes over you.

Moon says he aims to run an efficient and safe plant — and that starts the minute beans spill out of the roaster. He points to a cooling can that is "designed to draw air from the room over the beans and exhausts that air out of the facility. So it is really grabbing a lot of all of the gases coming off the coffee," he explains.

Why are these gases so worrisome? Because they contain a chemical called diacetyl — a natural byproduct of the coffee roasting process that, in large concentrations, can infiltrate the lungs and cause a severe form of lung disease.

You might remember hearing about diacetyl several years ago, when a synthetic version of the chemical, which is used to give a buttery flavor to certain snack foods, was implicated in causing severe lung problems among workers at a microwave popcorn facility.

Now it looks like that chemical could affect the coffee world as well. People at home grinding or brewing up a pot need not worry, but the chemical could pose a danger to people working in commercial coffee roasting plants.

The issue first caught the attention of investigators at the Centers for Disease Control and Prevention back in 2012.

Workers at a coffee roasting plant in Texas were getting sick. "Physicians at a nearby university medical center had diagnosed five former workers with a very severe lung disease called obliterative bronchiolitis," says Rachel Bailey, a medical officer at the CDC's National Institute for Occupational Safety and Health. "So we visited the facility."

What Bailey and her colleagues found was diacetyl — high levels of it. This particular coffee roaster in Texas added flavorings to some of its beans. And indeed, Bailey says, "We found the highest concentrations in the flavoring room."

But they also found significant levels of diacetyl in the area where the natural, unflavored coffee beans were being processed, "in the grinding and packaging room where they packaged nonflavored coffee."

A couple of years later, reporters at the Milwaukee Journal Sentinel began digging into the issue. The newspaper's multipart investigation explored the potential that high levels of diacetyl could be causing respiratory illness in workers across the state.

In Madison, Moon says he knew nothing about the chemical, but that changed when a Journal Sentinel reporter asked him to allow an industrial hygienist to check his business for the presence of diacetyl.

"We're circulating air in the facility more," he says, "and bringing fresh air."

Now NIOSH is juggling a dozen requests from roasters around the country who want their facilities assessed, though none of these roasters are reporting diacetyl-related health problems by their employees.

Meanwhile, the National Coffee Association is carrying out its own analysis. "We are looking further, because current science does not indicate any support for the premise that exposure to diacetyl alone — created naturally in the roasting and grinding of unflavored coffee — increases the risk of obstructive lung disease," says Joseph DeRupo, a spokesman for the association.

While researchers have found strong links between exposure to the chemical and lung disease, they are still trying to work out exactly how much exposure is too much.

A spokesman from the Occupational Safety and Health Administration says currently, there are no plans to make rules regulating diacetyl exposure in workplaces. NIOSH — which can't pass regulations on this, but can make recommendations — issued a draft version of guidance for safe exposure in August 2011 and expects to release a final version later this year.

In the meantime, some coffee processing plants are taking preliminary precautions. In Milwaukee, Lincoln Fowler, a co-owner of Colectivo Coffee, says he has established some best practices. And they appear to be working.

He spent years perfecting his shop's air flow system and recently called in experts to test it. The diacetyl count there came in well below NIOSH's proposed standards.

But Fowler thinks concerns about workplace well-being should be put in perspective.

His workers handle hundreds of pounds of coffee on a daily basis, Fowler says. "I'm constantly after our staff to be careful about how you lift," he says. "I would argue that potential back problems are probably a much more significant threat."