Accessibility links
50 Shades Of Shakespeare: How The Bard Used Food As Racy Code : The Salt The eggplant and peach emoji are standard code for racy thoughts these days, but food has been used for sexual innuendo for centuries. Shakespeare was a pro. (Happy Shakespeare Week!) 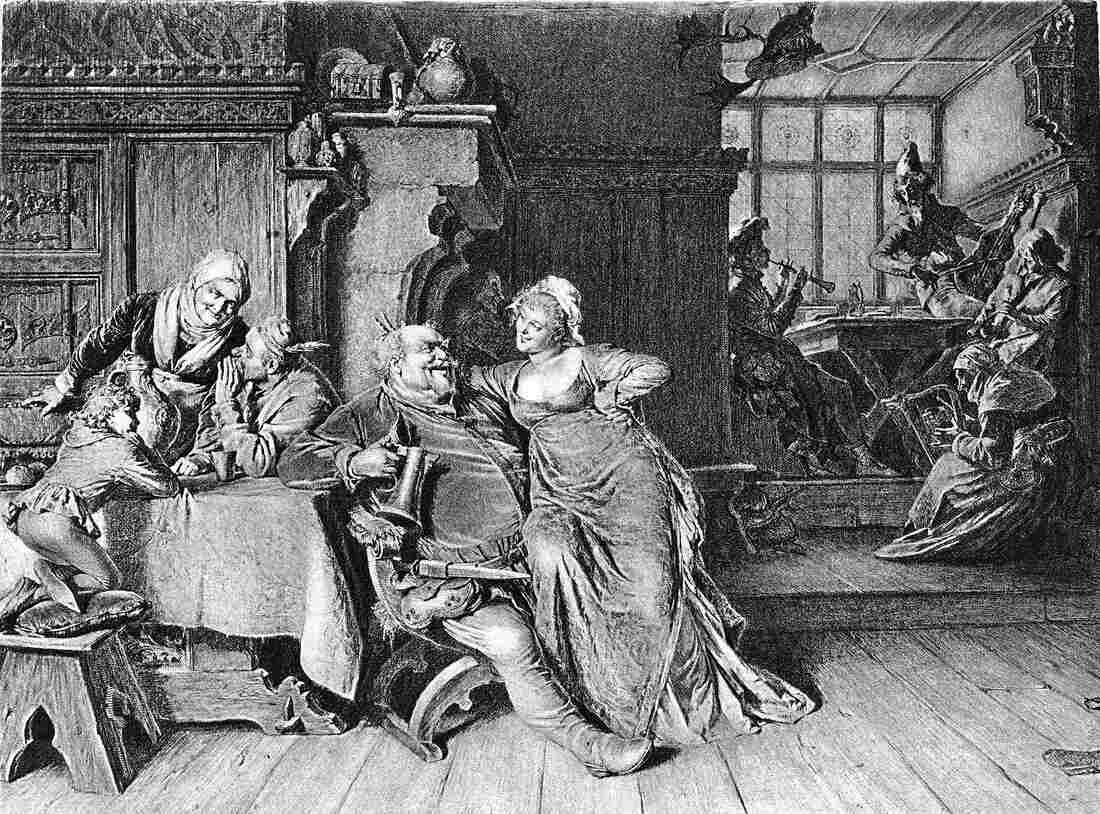 The libertine Falstaff sits with a woman on his lap and a tankard in his hand in an illustrated scene from one of William Shakespeare's Henry IV plays. Kean Collection/Getty Images hide caption 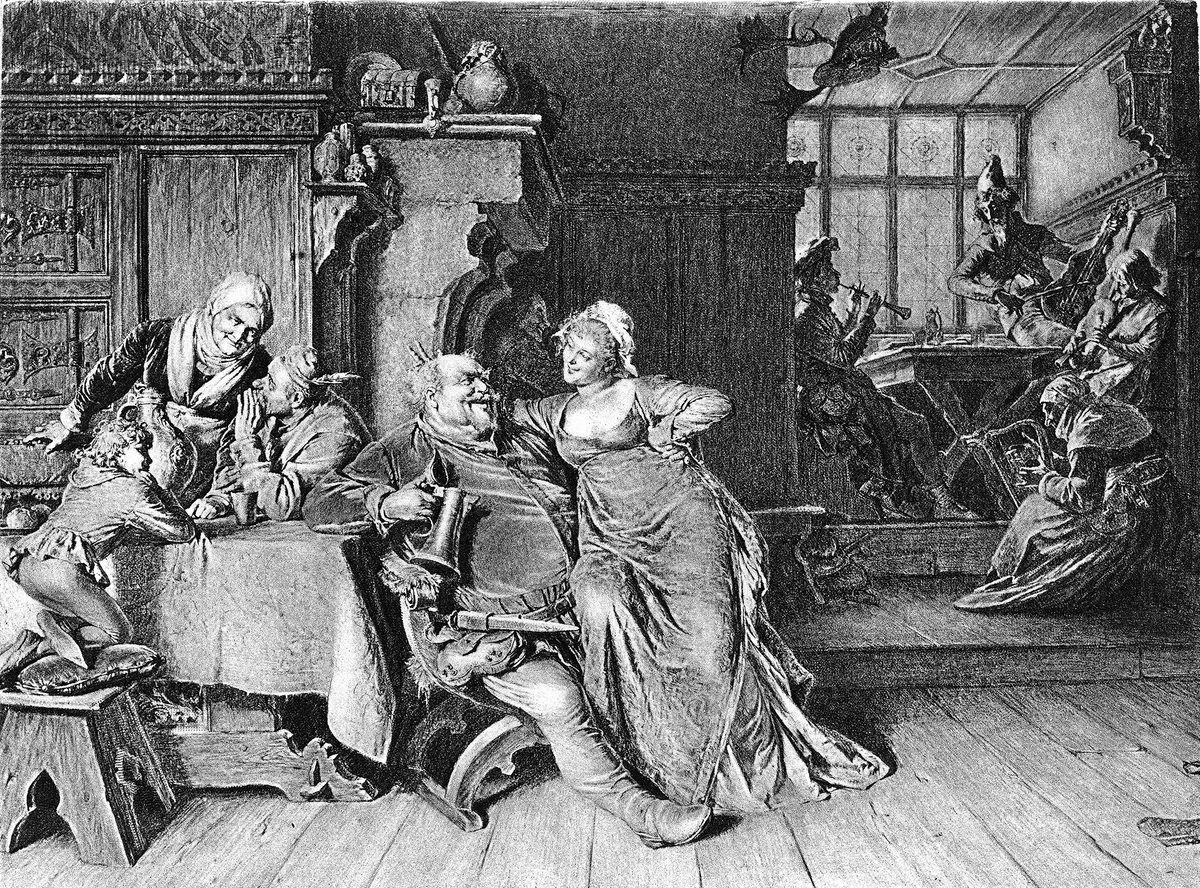 The libertine Falstaff sits with a woman on his lap and a tankard in his hand in an illustrated scene from one of William Shakespeare's Henry IV plays.

Editor's note: This week, to mark the 400th anniversary of William Shakespeare's death, we will be running a series of stories examining the links between food and the Bard. Oh, and in case the headline didn't clue you in, this post contains sexually explicit language.

The eggplant and peach emoji are standard code for racy thoughts these days, but people have been using food as sexual innuendo for centuries. Shakespeare was a pro at the gastronomic double entendre [insert blushing face emoji here]. We asked Héloïse Sénéchal, chief associate editor of the RSC Shakespeare edition, to help us decode some of the bard's bawdy food jokes.

"There appear to be a greater number of food-related terms for the vagina (fruit dish, fig's end, nut, medlar) than for the penis (beef, root, carrot), " Sénéchal explains via email.

Mistress Quickly is the hostess of The Boar's Head, a tavern in London's Eastcheap, where the libertine Falstaff and his cronies hang. She bemoans Falstaff's ever-swelling unpaid bar tab – and a little bit more.

MISTRESS QUICKLY: I am undone with his going. I warrant he is an infinitive thing upon my score. Good Master Fang, hold him sure: good Master Snare, let him not 'scape. He comes continuanly to Pie-corner —saving your manhoods — to buy a saddle...

Pie-corner was an area in London near the Smithfield horse market, located on the corner of the significantly named Cock Lane (of course, it might just be a rooster, too). The area was known for cooks' shops, saddlers and brothels ("pie" and "corner" were both slang terms for lady parts). The saddle is a triple entendre: It's what you put on a horse, of course, but a saddle can also refer to a "saddle of mutton" – a meat cut taken from the loin, plus the hips – and it was common slang for a prostitute. Manhoods ... you can figure this one out on your own.

"The instant, easy carnality of carrots, parsnips" and other phallic vegetables "has been used since time immemorial for innuendo and symbolism," explains Sénéchal. Shakespeare pokes fun with this classic metaphor in The Merry Wives of Windsor, Act 4, Scene 1.

Mistress Quickly returns in this play — this time as a housekeeper. The Welsh parson, Evans, quizzes the schoolboy Page on his knowledge of Latin, but Quickly can't hold back her experienced interjections.

EVANS: ... What is the focative case, William?

QUICKLY: And that's a good root.

Evans is a typical bumbling Shakespeare character and definitely no grammar wiz. He accidently stumbles into the "f-word" by turning "vocative" into "focative." The O is suggestive of ... well ... a fig, a nut, a medlar... . The pedant Evans uses the Latin for "missing" (caret), but Quickly hears "carrot," which, along with "root," is slang for, ahem, the male member.

Romeo and his friend, Mercutio, are two Italian teenagers trying to one up each other with their sexual experience.

MERCUTIO: Thy wit is a very bitter sweeting: it is a most sharp sauce.

ROMEO: And is it not then well served into a sweet goose?

MERCUTIO: O here's a wit of cheverel, that stretches from an inch narrow to an ell broad!

Straight up, the sweeting is a sweet apple, and the sharp sauce is bitter (as well as a cutting remark). But Romeo's response alludes to the proverb "sweet meat must have sour sauce." Except he gives it a vulgar spin – he interprets "sauce" as an allusion to semen, uses "goose" as slang for prostitute, and makes "served" something for a bed rather than a table (or not, depending on your tastes). Mercutio then ups the ante as he imagines his brains in his codpiece: "Wit" plays on the sense of "penis." Cheverel is easily stretched leather, which the teenager brags is as long as an ell (45 inches).

"Food and drink ... provide ripe opportunities for sexual metaphor," says Sénéchal. The symbolism --as well as the "sipping, swilling, tasting, biting, swallowing, devouring" — offer the poet plenty of sauce for the proverbial goose.

Anne Bramley wrote on food in early modern literature while a Ph.D. student at the University of Chicago and taught Shakespeare at Duke University. She is the author of Eat Feed Autumn Winter.