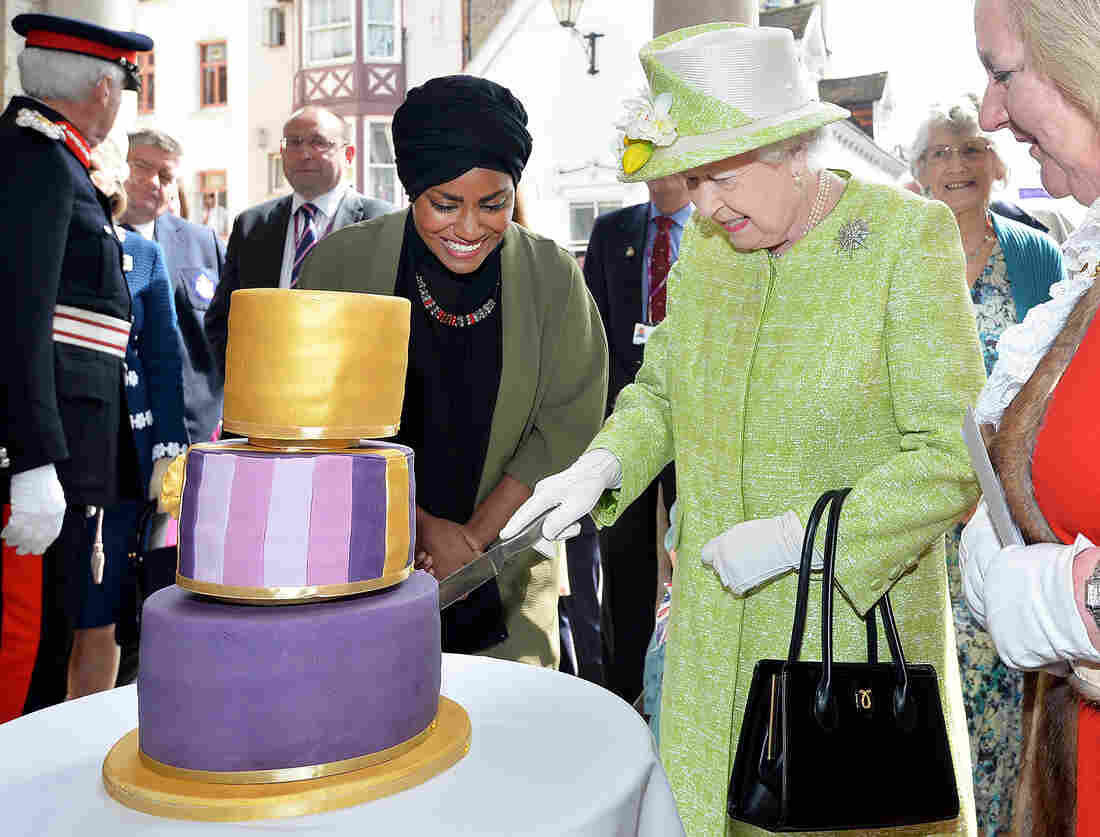 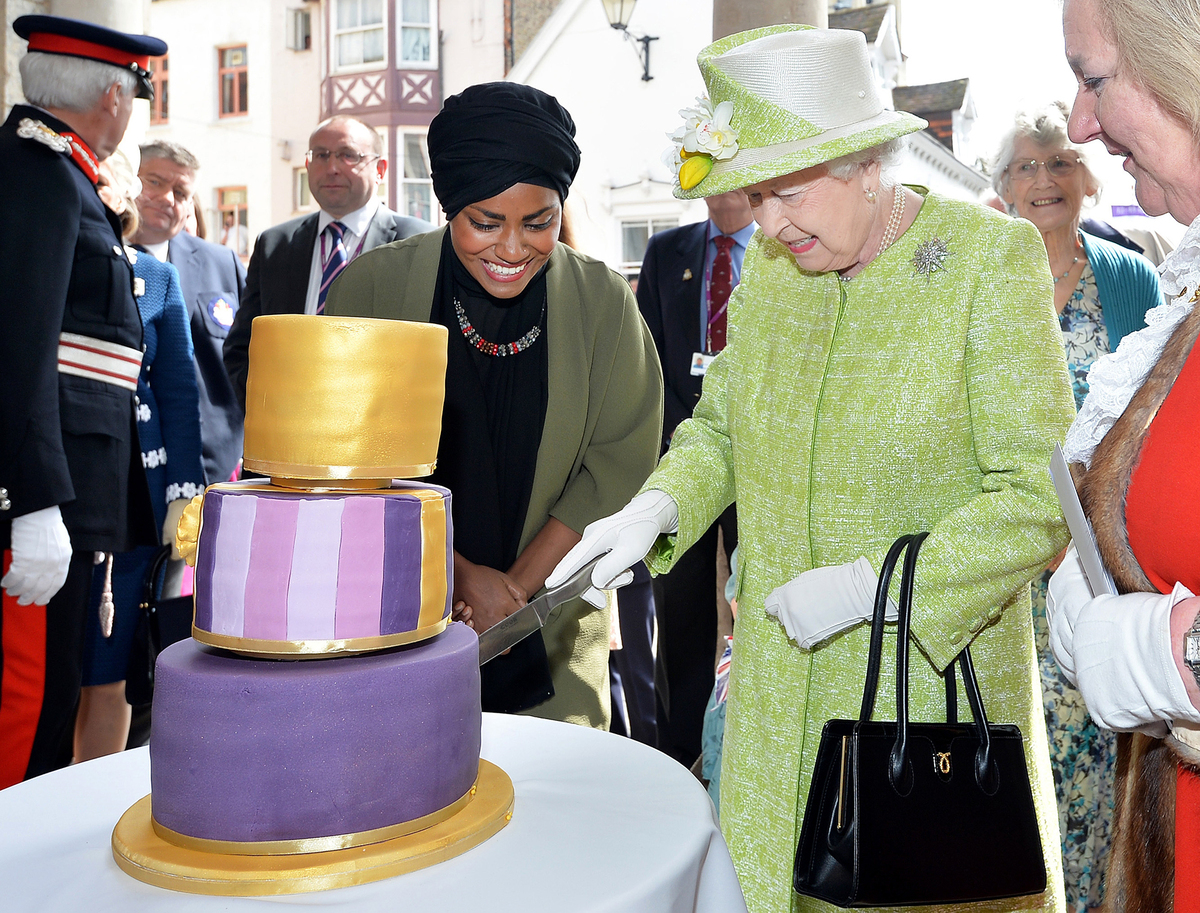 Britain's Queen Elizabeth II cuts into a birthday cake baked by Nadiya Hussain (left), winner of The Great British Bake Off, during celebrations of the queen's 90th birthday in Windsor, England.

Britain's Queen Elizabeth II turns 90 this week, and like many of us do on our birthdays, she'll be celebrating with some cake.

This year the task of coming up with a cake fit for a queen fell to Nadiya Hussain, the winner of the most recent season of the wildly popular TV show The Great British Bake Off. 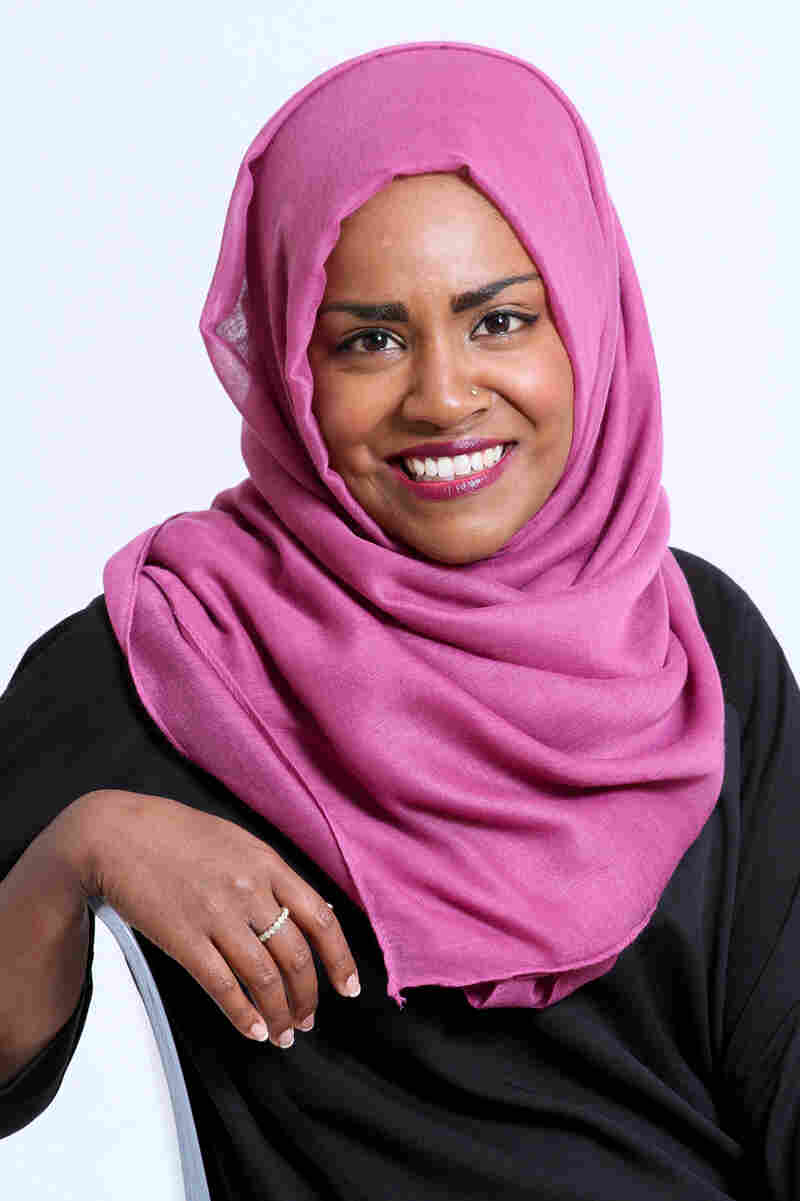 Nadiya Hussain won over audiences as a contestant on The Great British Bake Off. Courtesy of AK Artist Management hide caption

Hussain's story captivated audiences: She quickly became famous for her sense of humor and for her fantastical creations, which included a gravity-defying soda-flavored cheesecake and a chocolate peacock. She's the daughter of immigrants from Bangladesh, and she's become a role model to many in the U.K.

Her latest masterpiece is an orange drizzle birthday cake with orange curd and orange buttercream — which she hand-delivered to the queen.

Before that meeting happened, NPR's Lourdes Garcia-Navarro spoke to Hussain about her craft.

On how she got the job

A couple of weeks ago, I just got a phone call to say, "Hey, would you like to do this?" And my initial reaction was "no," because I was so afraid of getting it horribly wrong. And then it dawned on me that I can't say no to the queen. So once I got over the nerves, I thought, well, actually this is such an honor, how can I possibly say no?

On how she decided what to bake

I went through this phase where I thought I need to do something traditional, and it needs to be really kind of what I thought the queen would expect. And actually, I went from that to doing a complete 360, and I went on to [bake] an orange drizzle. And even down to the decorations, I've decided to go very, very different.

I thought — how are people going to perceive me? I don't want people to look at my hijab straightaway and say, "Oh, she's just a Muslim." I don't want to be judged just based on that, because we are all so much more than that.

But that is who I am wherever I go.

On what it means to cook for the queen

There is definitely this weird juxtaposition between me and the queen and the cake — it's all a bit higgledy-piggledy. It's really odd. But when I accepted [the offer] to do this, I didn't think about who I was or who she was. It's the queen's birthday — and who doesn't like cake on their birthday?

On what she'll say when she meets the Queen

I'm trying not to think about what I'm going to say to her when I meet her. I mean, she is the queen, after all. I'm not even sure if I'm allowed to talk to her. I'm just trying to concentrate on not doing anything silly. I might high-five her and just be dragged away!