Accessibility links
'Man, Oh Manischewitz': When The Jewish Wine Was Big With Gentiles, Too : The Salt The wine associated with Jewish tradition was once a huge crossover success. At one point, the typical drinker was described as an urban African-American man. 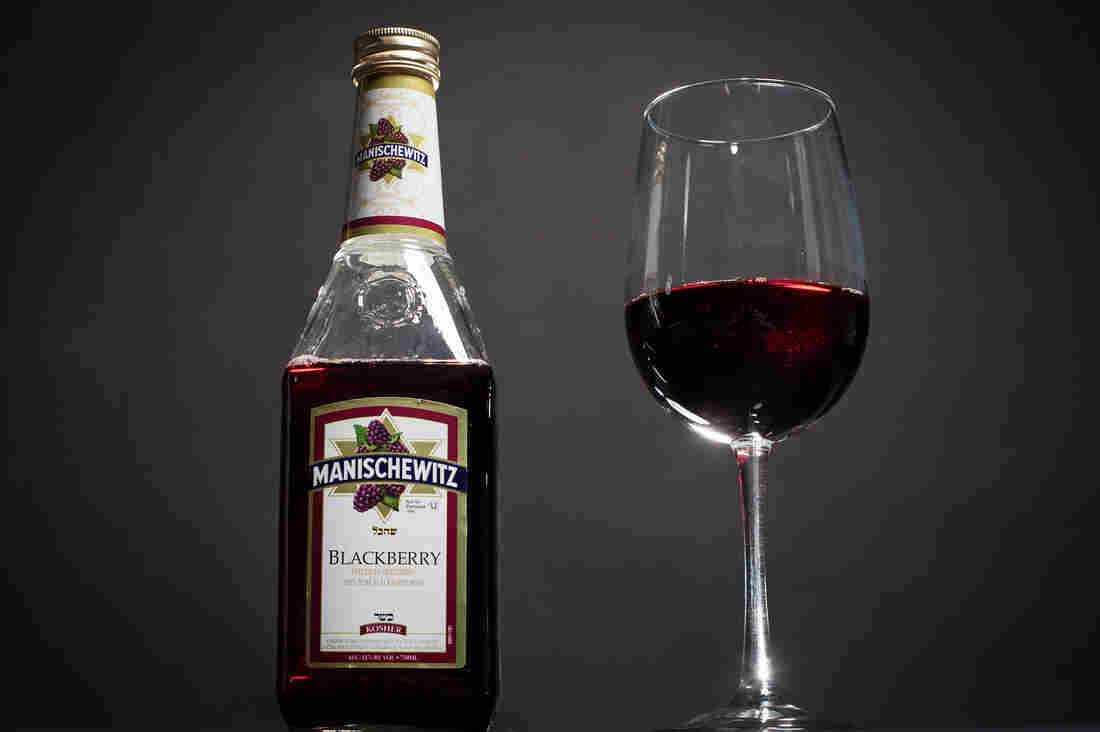 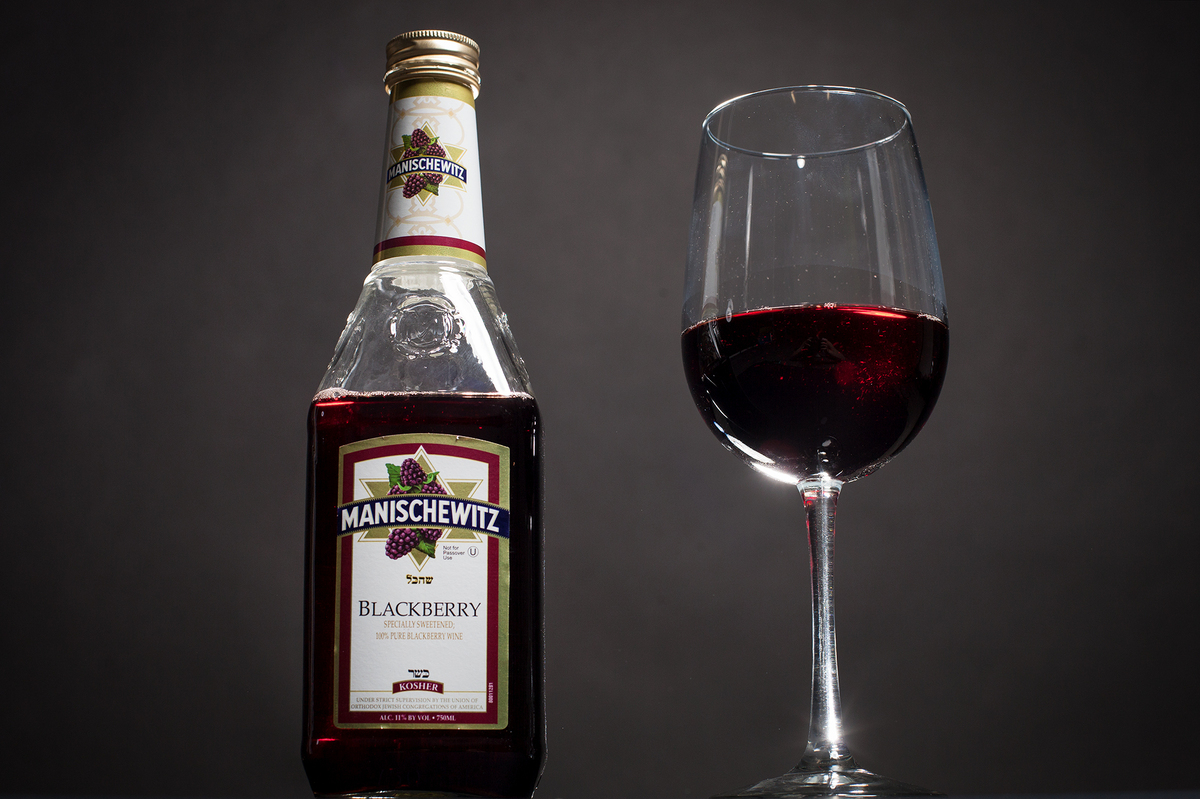 Manischewitz is closely associated with Jewish tradition, but it was once a huge crossover success. Sammy Davis Jr. was its spokesman in TV advertising. At one point, the typical drinker was described as an urban African-American man.

Passover Seders are steeped in tradition — ancient rituals that Jewish families invoke and repeat year after year. For many families, the lengthy prayers and symbolic food are accompanied by Manischewitz wine, a sweet, juicy variety made from Concord grapes and plenty of sugar. The historian Roger Horowitz recently joked about the wine during a lecture at the Brooklyn Historical Society, in which he reminisced about his family's Passover meals.

"Another ritual we had to endure was my father complaining about Manischewitz," he said to a chuckling crowd.

He was kidding, at least a little. "I didn't really mind Manischewitz at all," Horowitz tells me over the phone. But, he adds the wine has earned a reputation for being kind of hokey. "It's brought out for tradition's sake, not because the folks drinking it are looking forward to the taste," Horowitz says. His family, like many others, preferred drier wines to the saccharine variety. But at Passover, they poured some Manischewitz out for the prophet Elijah. "We thought, 'this is about tradition,' and somehow, that seemed appropriate," Horowitz says.

But this wine so often associated with Jewish tradition has its own history that, Horowitz says, has been surprisingly forgotten. In his new book, Kosher USA: How Coke Became Kosher and Other Tales of Modern Food, Horowitz explores how Manischewitz wine became such a fixture at the Jewish dining table — and a runaway crossover success with non-Jews, too. 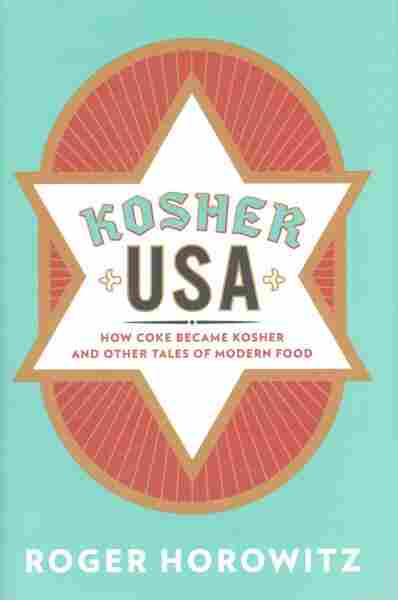 How Coke Became Kosher and Other Tales of Modern Food

The wine was fermented and bottled in a sprawling facility at the Bush Terminal, on the still-industrial stretch of 2nd Avenue in Brooklyn. The location was convenient for a handful of reasons: The nearby railroad carted in Concord grapes from farms in upstate New York. Ports made it possible to send shipments off. Lower Manhattan, on the other side of the harbor, was still a thriving Jewish community.

In the 1940s, the branding emphasized the wine's religious origins: The label featured a rabbi with a long beard holding a glass of wine in one hand and a sacred text in the other. The word "Sacramental" was splashed in all caps across the label, which was also adorned with Hebrew lettering.

Manischewitz wasn't the only wine company to leverage religious iconography to move bottles; the marketplace was flush with kosher wine brands. The difference, Horowitz says, is that those other companies tended to "be made by Jews, for Jews." Instead, he says, Manischewitz "mobilized the kosher characteristics, Hebrew lettering, and imagery as a way to sell to non-Jews, too."

A 1954 article in Commentary magazine — founded about a decade earlier by the American Jewish Committee — documented the trend. The reporter noted that, though kosher wine was, first and foremost, a sacramental drink, sales records suggested that it was being guzzled by secular folks, too. "Sales graphs show peaks at Christmas and Thanksgiving several times higher than for Passover," the article states. "Even such a relatively minor occasion as St. Patrick's Day causes a discernible rise."

Turns out, the makers of Manischewitz were actively wooing gentile consumers – and specifically targeting African-Americans in northern cities. In the 1950s, a doo wop group known as The Crows released a single called the "Mambo Shevitz." It wasn't a chart-topper.

But the lyrics borrowed from the wine's promotional copy — the catchphrase "Man, oh Manischewitz" — and nodded to the contemporary ballroom dance craze. "Man, oh, man, that music, baby, dig that beat," the singer crooned. "Like a glass of wine, it's so cool and sweet."

Black musicians also played into the brand's print advertising campaigns. In his book, Horowitz recounts how a group called the Ink Spots featured in a 1950 ad in the Pittsburgh-Courier newspaper. "Manischewitz kosher wine harmonizes with us — sweetly!" the text declared. "It's our favorite wine, too."

Later, Manischewitz wine tapped entertainer Sammy Davis Jr. to hawk the drink in a series of television spots. In one, for the company's Almonetta wine, he clutched a goblet in one hand and used the other to skitter a finger across the piano, pounding out a clunky melody in the rhythm of Alouette, the singsong French children's ditty about plucking feathers from a lark. Debonair, shirt slightly unbuttoned in front of a fully loaded wood bar, he looked suave — like a pretty fun guy to drink with.

"Try some after dinner tonight," Davis says in the ad. "It's delicious." Davis was a savvy choice for the company — a slick celebrity who was familiar to African-American consumers, and had also converted to Judaism. The choice "wasn't going to antagonize Jewish consumers," Horowitz explains.

It's clear that the ads did get the wine on people's radar. In his book, Horowitz cites a survey from 1957 that polled Jews, African-Americans, and white gentiles in New York, L.A., and Detroit. It found that 72 percent had seen a Manischewitz ad on TV, and nearly half had heard a radio ad. By 1973, the company was pouring about 85 percent of its magazine advertising budget into placements in Ebony, Horowitz writes.

Horowitz also speculates that the wine might have been pleasantly familiar to some African-American consumers because the Concord grape taste was similar to the varieties of wine commonly made from crushed scuppernong or muscadine grapes in the American South. (Horowitz told me that he's even heard stories about Baptist churches purchasing kosher wine during Prohibition, because it was a straightforward way to skirt regulations.) Horowitz writes that, by the mid-1950s, some 80 percent of Manischewitz wine consumers weren't Jewish. Even in 1981, he writes, Forbes magazine described the typical Manischewitz drinker as an urban, blue-collar African-American man.

Today, Manischewitz isn't working so hard to appeal to new customers, says associate brand manager Shannon Brennan. The wine is now under the umbrella of Constellation Brands, and is produced in a factory in upstate New York. Brennan says that Manischewitz wine doesn't have a marketing budget. She says that "it has its core consumers," but added: "It's not a brand that we're looking to grow. It's maintaining — it's in coasting mode at the moment."

Brennan says that the company produced somewhere in the ballpark of 900,000 cases during the last fiscal year. That translates to around 2.14 million gallons. At the height of the brand's popularity, Horowitz says, it was churning out about 13 million gallons per year.

Even as it tried to woo a broader audience, Manischewitz didn't shrug off its religious origins. When the company released a brand extension focusing on fancier products, like the Cream White Concord wine in 1968, Horowitz writes, it shrunk the figure of the rabbi on the label — but he was still there, along with plenty of Hebrew lettering.

These days, Brennan notes, the rabbi has been supplanted by a grape. The historic packaging is familiar, she says, but "you're not going to find it on the shelf—and if you do, goodness, don't drink it, I don't know how old it is."

Historically, the company navigated the conflicting interests of heritage and crossover appeal. It probably couldn't have done otherwise. "A name like Manischewitz is unmistakably Jewish," Horowitz says. "It's a little like 'Horowitz.' No one's ever mistaken me for anything but Jewish."

Jessica Leigh Hester writes about urbanism and history. She lives in Brooklyn.