Accessibility links
Israel's Health Minister To McDonald's: 'Not In Our Country' : The Salt McDonald's is super popular in Israel — the chain even offers potato-starch buns for Passover. But now McD's is fighting back against government accusations that it's "junk food."

Israel's Health Minister To McDonald's: 'Not In Our Country'

Israel's Health Minister To McDonald's: 'Not In Our Country' 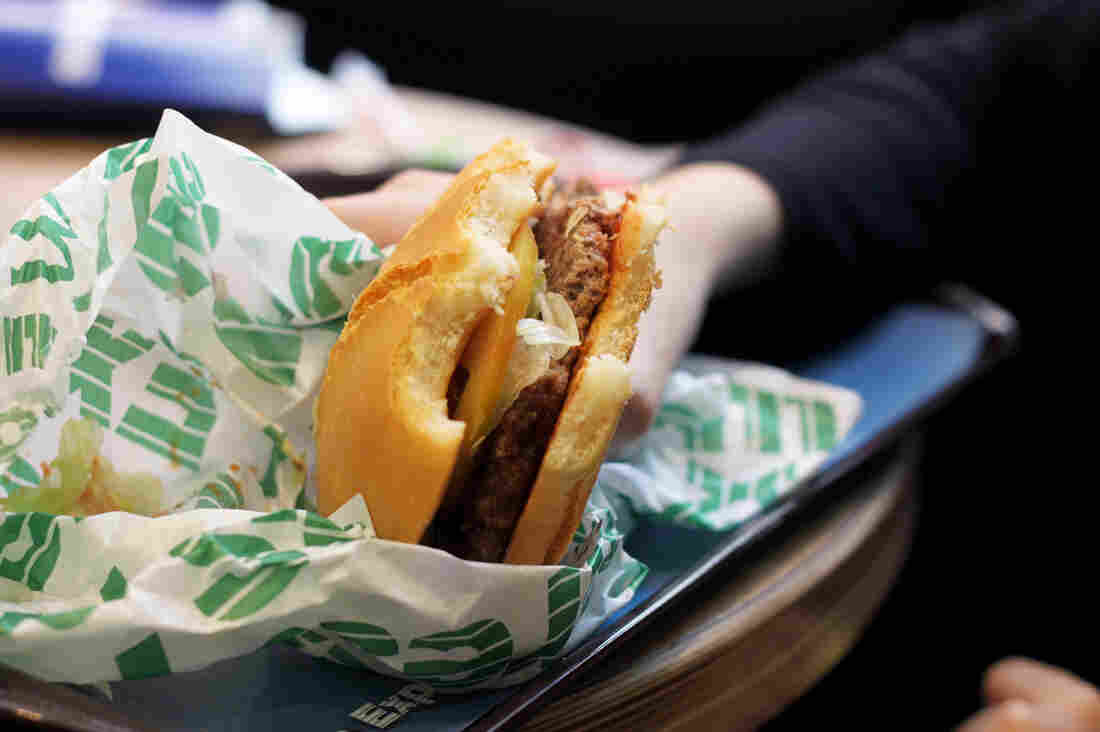 McDonald's is super popular in Israel — the chain even offers potato-starch hamburger buns, like this one, that are kosher for Passover. But now McD's is fighting back against the Israeli health ministry's accusations that it's "junk food." Daniel Estrin for NPR hide caption 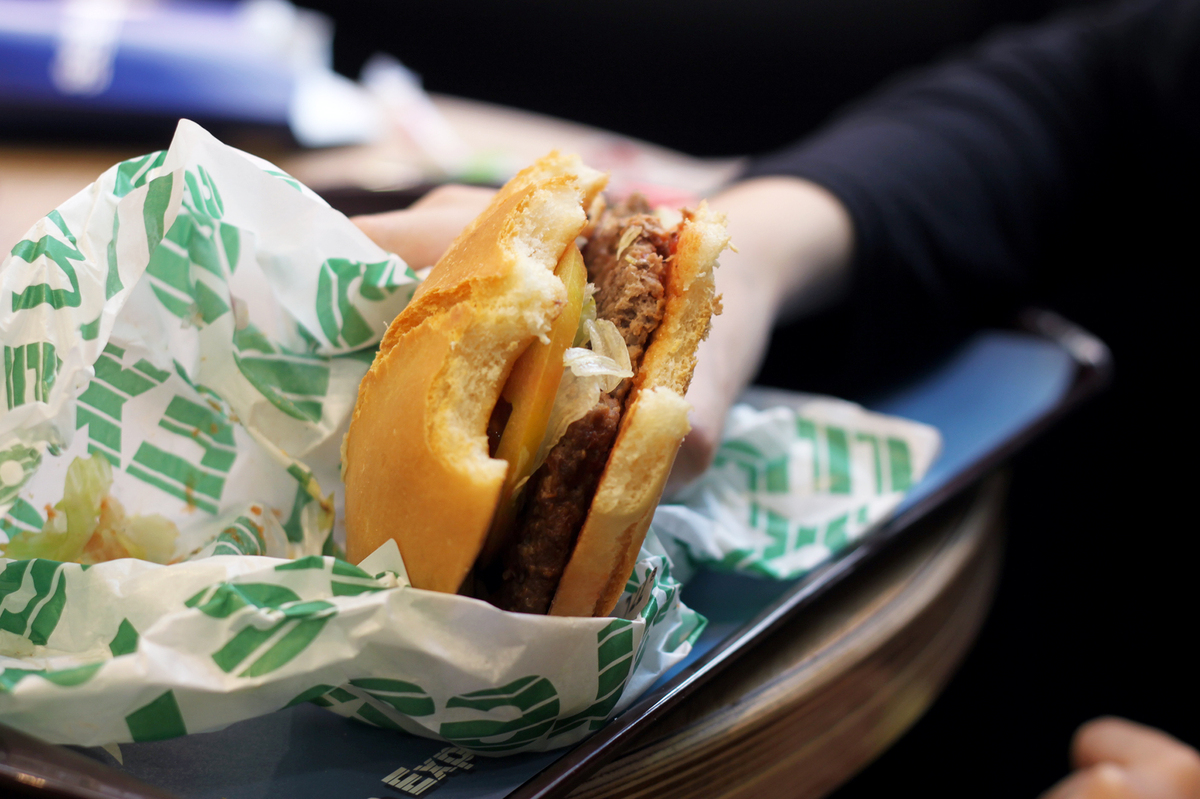 McDonald's is super popular in Israel — the chain even offers potato-starch hamburger buns, like this one, that are kosher for Passover. But now McD's is fighting back against the Israeli health ministry's accusations that it's "junk food."

"Junk food? Not at McDonald's!"

At least, that's what the fast-food chain hopes to convince Israel's health minster.

The gutsy slogan appeared at the top of full-page advertisements in Israeli newspapers last weekend after health minister Yakov Litzman called for a boycott of McDonald's in Israel – part of a new push to combat ballooning obesity and unhealthy eating habits in the country.

"You shouldn't eat junk food. McDonalds: Out. Not in our country," the minister said at an April 12 conference for cardiologists.

McDonald's is the largest fast-food chain in Israel. There are kosher branches in the country, and on the weeklong Passover holiday, which begins Friday, McD's substitutes its usual hamburger buns with potato-starch buns, in line with the Jewish custom of not eating bread products on the holiday. (It's a dietary commemoration of the biblical story of the Exodus, when the Israelites were in such a rush to flee Egypt that they did not have time to wait for their bread to rise.)

Israelis tend to be healthier eaters than the average American. A Mediterranean diet is the norm. The country's staples of falafel and hummus make it a vegan's paradise. People frequently eat salad for breakfast. Yet, about half of Israeli adults are overweight, according to 2013 health ministry statistics.

The way McDonald's sees it, the health minister is picking on the wrong fast-food chain. 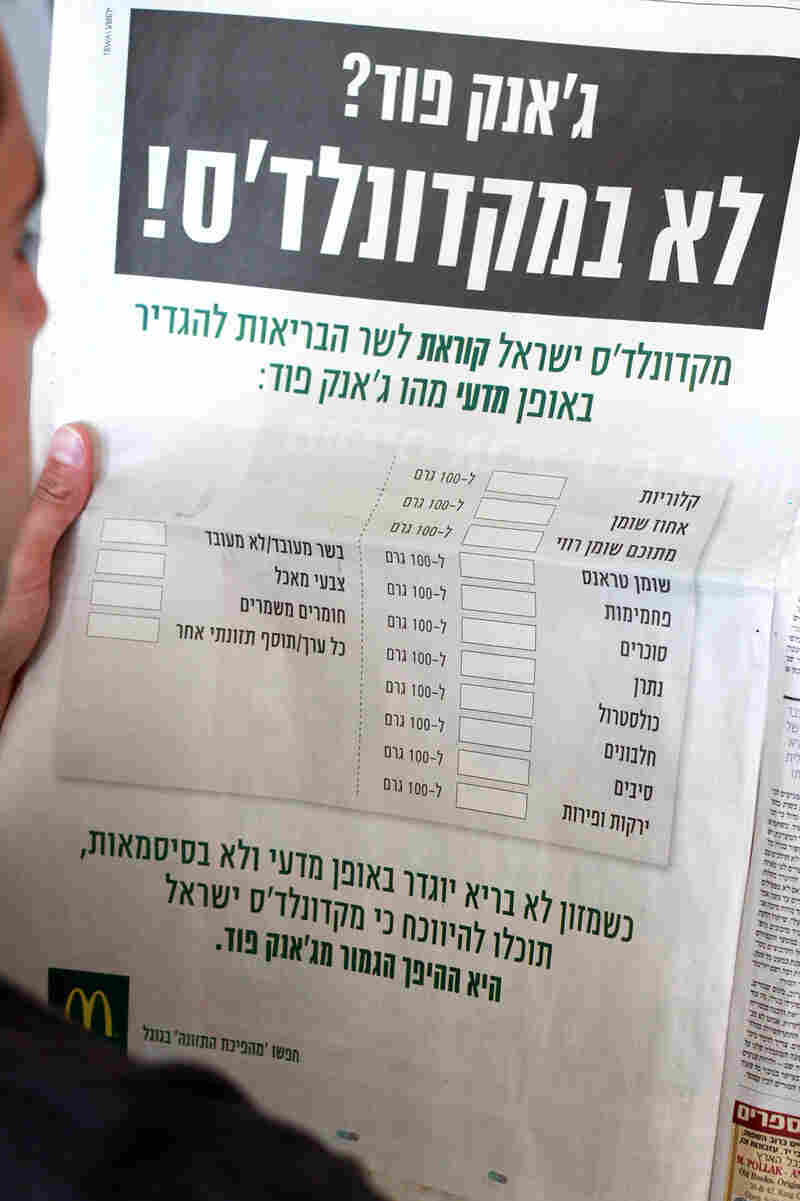 The message at the bottom of the Israeli newspaper ad by McDonald's is directed at Israel's health minister: "When unhealthy food is defined scientifically and not according to slogans, you will be able to prove that McDonald's Israel is the exact opposite of junk food." Daniel Estrin for NPR hide caption

In response to criticism about the nutritional value of its food, McDonald's has made changes to its menu worldwide in recent years. In Israel, the chain says, McDonald's reduced fat from unprocessed meat from 18 percent to 9 percent, eliminated trans fats from its French fries, cut saturated fats from its fried food by two-thirds, and reduced sugar and sodium in all of its offerings.

It also began publishing the nutritional value of all of its foods, the first fast food chain in Israel to do so, McDonald's in Israel says.

In Its newspaper ad campaign, McDonald's challenged the Israeli health minister to set a "scientific" definition of junk food. It printed a list of criteria. What amount, it asked, of calories, fats, carbohydrates, sugars, sodium, cholesterol, protein, fiber, fruits and vegetables per 100 grams would qualify as junk?

"When unhealthy food is defined scientifically and not according to slogans," McDonald's ad reads, "you will be able to prove that McDonald's Israel is the exact opposite of junk food."

Einav Shimron Greenbaum, the health ministry's spokeswoman, would not say. But, in an interview, she stressed that no country's nutritional board has issued a scientific definition of junk food.

In the health ministry's position paper against eating fast food, the ministry defines fast food as food that is eaten in 7-10 minutes without fork and knife, needs little chewing, and makes the eater feel satiated only after 20 minutes, pushing the eater to consume more. High consumption of fast food, according to the health ministry, leads to diabetes, obesity, high blood pressure and heart complications.

The health ministry's spokeswoman says these criteria apply to McDonald's, despite the fact that the chain has added healthy items to its menu in recent years.

"No one goes in there to eat salad," Shimron Greenbaum says.

Among the ideas raised, according to the Israeli daily Haaretz: levying taxes on soft drinks; limiting advertisements of food targeting children that is high in salt, sugar and fat; providing discounts of healthy food for the poor; requiring healthy eating education in schools; building gyms in schools; and funding obesity treatments.

Shortly after Israel's health minister made headlines with his super-sized attack on McDonald's, Israeli media reported an embarrassing statistic: according to the health ministry's budget, the minister's office staff spent some 70,000 shekels (about $18,600) on soft drinks in 2015.

Daniel Estrin is an American journalist in Jerusalem. He's on Twitter @danielestrin.