Accessibility links
In Shakespeare's Day, Hunger Tore Through England. His Plays Tell The Tale : The Salt Many food riots broke out during Shakespeare's era. Endless rain wiped out crops, and speculators profited (including the bard). The chaos and anxiety around food show up in some of his famous works. 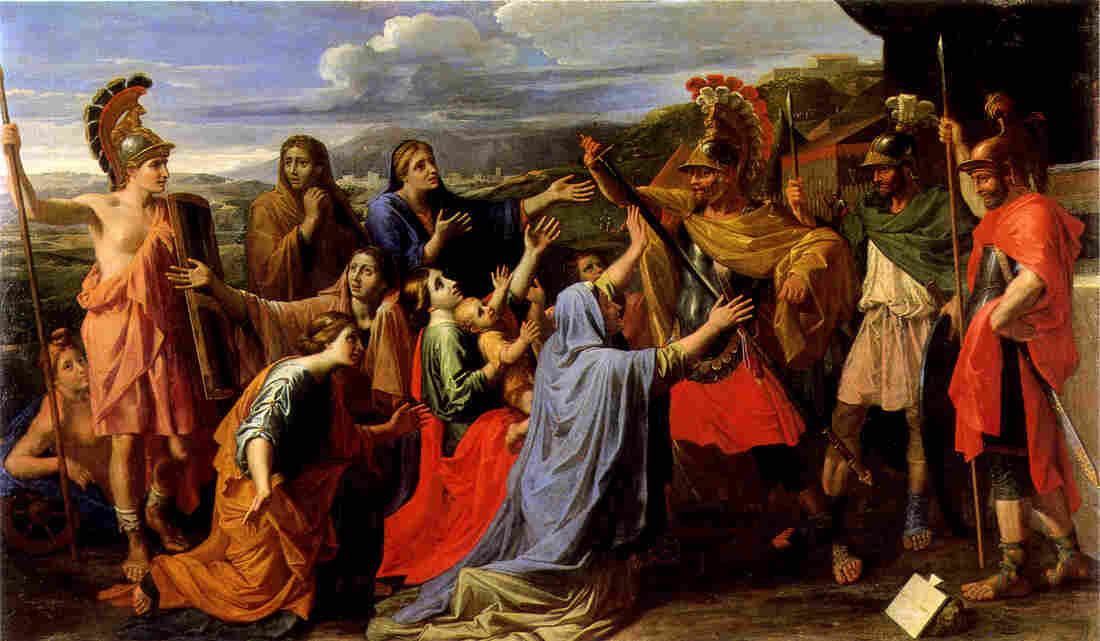 An illustration depicts a scene from Shakespeare's Coriolanus, a play that opens with citizens armed with "staves, clubs, and other weapons" in protest against the city fathers they accuse of hoarding grain. In Shakespeare's day, food shortages tore through England — and the bard himself was fined for grain hoarding. Nicolas Poussin/Wikimedia Commons hide caption 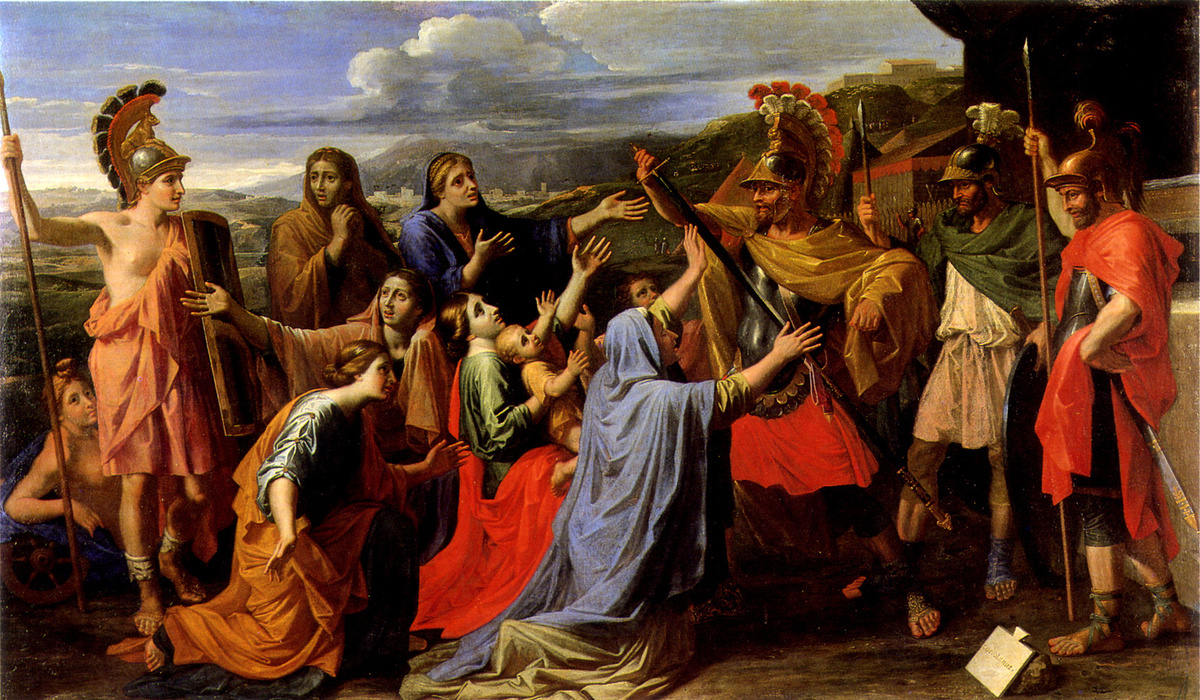 An illustration depicts a scene from Shakespeare's Coriolanus, a play that opens with citizens armed with "staves, clubs, and other weapons" in protest against the city fathers they accuse of hoarding grain. In Shakespeare's day, food shortages tore through England — and the bard himself was fined for grain hoarding.

Editor's note: This week, to mark the 400th anniversary of William Shakespeare's death, we will be running a series of stories examining the links between food and the Bard.

In Shakespeare's time, England was a hungry and volatile nation.

Cycles of endless, torrential rain repeatedly wiped out crops and drove up food prices. Both bread and ale demanded increasingly expensive wheat and barley. And some tried to make a quick shilling off the catastrophe by hoarding grain and holding it back from the open market — thus hiking up food bills even further.

The result? Political disorder and social unrest. Shakespeare tried to make meaning of it all by transforming the national drama into stories for the stage.

Take A Midsummer Night's Dream. It's an upside-down world where authority is all out of whack: The fairy king and queen battle for power, a headstrong daughter defies her father, and Puck turns just about everything the wrong way round. Titania, the fairy queen, has a theory about why they can't get it together: fog, flood, village greens "filled up with mud," the "drowned field," and the young corn that "rotted" before it ripened. Chaos in the social realm, Shakespeare poetically hints, springs from chaos in the natural world.

But in Coriolanus, the playwright makes the struggle real. The play, based on the life of the legendary Roman leader Caius Marcius Coriolanus, opens with citizens armed with "staves, clubs, and other weapons" in protest against the city fathers they accuse of hoarding grain while the populace starves. The resistance leader insists he fights "in hunger for bread, not thirst for revenge" — even as he rallies the masses to rebellion "rather to die than to famish."

Then Menenius – a Roman patrician who brags about his own indulgences — tries to fob off the citizens by blaming "the gods" (i.e. the weather) rather than the politicians. The citizens don't buy it. As Theodore Leinwand, professor of English at the University of Maryland, tells me, there was a popular saying of the time: "The belly has no ears." In other words, hungry people don't want to listen to fat-cat speeches about "being patient."

And during Shakespeare's time, the English people were plenty hungry. The country saw at least 40 food riots between 1586 and 1631, as historian Buchanan Sharp records in his classic work In Contempt of All Authority. Shakespeare was new on the London scene just as the city was rocked by the food riots of the 1590s. And the bard well knew the hunger-fuelled 1608 "Midland Rising" that affected his home turf in Warwickshire.. Scholars suggest Shakespeare drew on both in writing Coriolanus.

Throughout these hard years, Queen Elizabeth I and her successor, King James I, issued edicts that banned "rich owners of corn" from hoarding the crop, "thereby to increase the prices." Justices of the peace were called on to prevent just such profiteering.

Even Shakespeare was fined for being a grain speculator. At the same time, wealthy landowners living it up in London were royally rebuked for not returning to their country manors to provide relief for the "multitude of poor people."

And who exactly were this hungry "multitude?"

"The 'middling sort'," says Leinwand – basically, the same group of people that "slowly, over hundreds of years, morphs into what we call the middle class." In Jacobean times, that meant people like craftsmen and tradesmen – like goldsmiths, haberdashers and leather sellers.

But these "middling sort" were in "a tenuous position in Shakespeare's day," explains Leinwand, "just as the middle class is today." It didn't take much to slide into "the poorer sort" – or what 1-percenter Coriolanus viciously disregards as the "rank-scented many."

These connections between Shakespeare's time and our own are even sharper for professor Richard Marggraf Turley of the U.K.'s University of Aberystwyth, who co-wrote a book that explores the ways in which food anxieties manifest in literature.

Snacking In Shakespeare's Time: What Theatregoers Ate At The Bard's Plays

Today's "anxieties and crises around food and food security aren't new," Turley says, "and the problems have not significantly evolved." He says in plays like Coriolanus and King Lear, Shakespeare explored "the psychology of these issues and the way they play through the populace."

Indeed, though King Lear is often thought of as a family drama, Turley and his co-authors argue that, at its core, the play is really about food insecurity.

When Lear divides up his kingdom, his daughter Cordelia is granted "the grain-growing areas," but her sisters, Goneril and Regan, are stuck with Scotland and Wales, which don't produce bread. "Of course the two sisters are going to invade," says Turley – otherwise, "they can't feed their people."

And Shakespeare, he points out, "who grew up in and returned to Warwickshire, the bread basket of England, was best placed to write about food riots and food constraints."