Accessibility links
Beneath An Ugly Outside, Marred Fruit May Pack More Nutrition : The Salt Why are some fruits and veggies born ugly? Fighting off fungus, heat and pests can leave blemishes. Some researchers think these battle scars may boost the antioxidant content in produce.

Beneath An Ugly Outside, Marred Fruit May Pack More Nutrition

Beneath An Ugly Outside, Marred Fruit May Pack More Nutrition 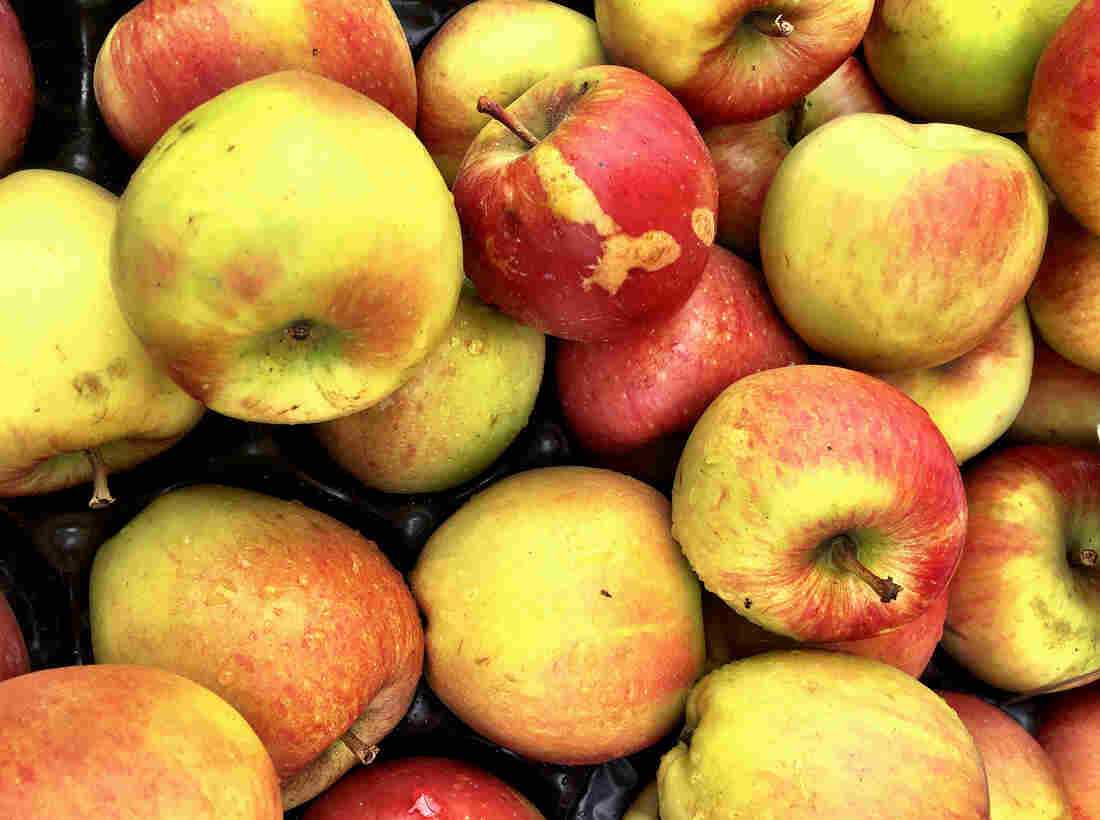 Unsightly scars on the outside of fruit might reflect higher nutrition within. Daniela White Images/Getty Images hide caption 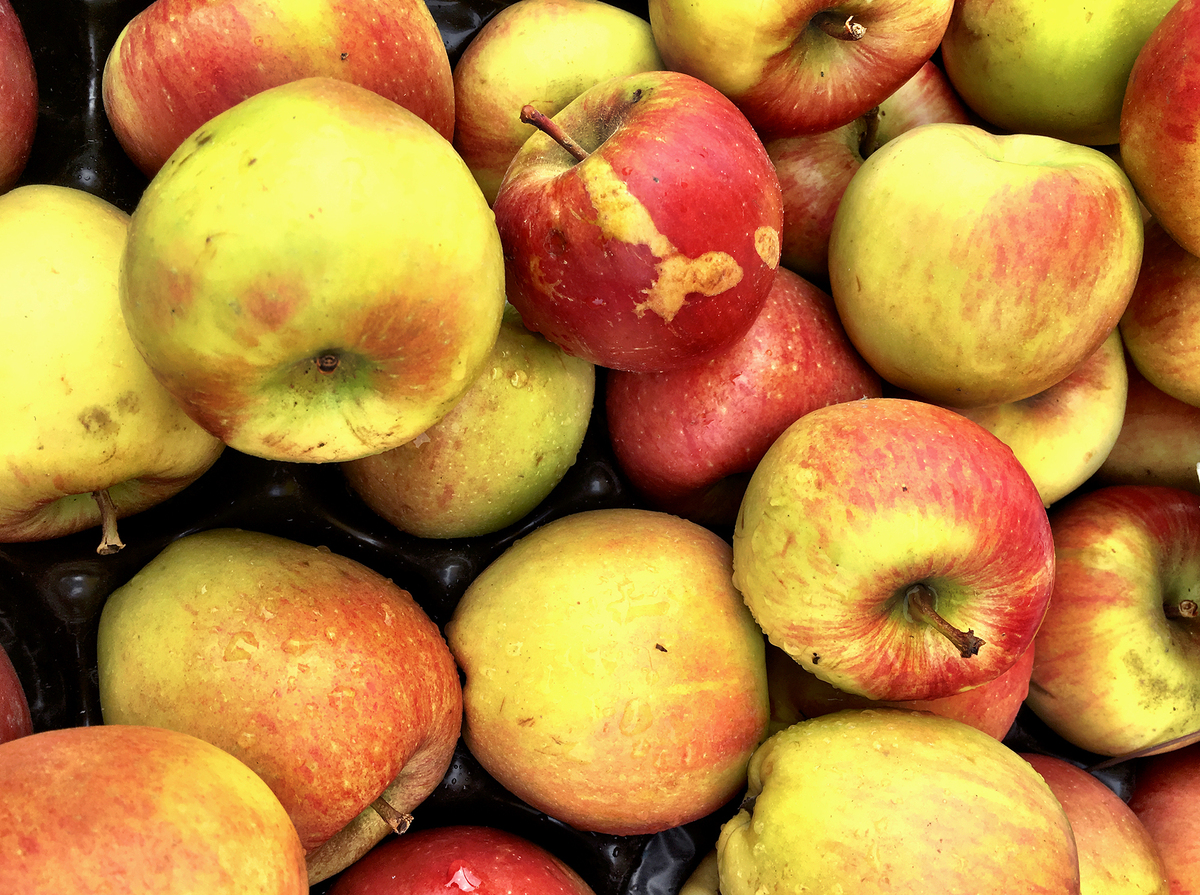 Unsightly scars on the outside of fruit might reflect higher nutrition within.

When orchardist Eliza Greenman walks through a field of apple trees and gazes upon a pocked array of blemished and buckled fruits — scarred from fighting fungus, heat and pests — she feels a little thrill of joy. "I'm absolutely infatuated with the idea of stress in an orchard," says Greenman, who custom grafts and grows pesticide-free hard cider apples in Hamilton, Va. These forlorn, scabbed apples, says Greenman, may actually be sweeter.

In an unofficial experiment, Greenman tested scabbed and unscabbed Parma apples, a high-sugar variety native to southwestern Virginia, and found the scarred apples had a 2 to 5 percent higher sugar content than unmarred apples from the same tree. More sugar means a higher alcohol content once fermented, producing a tastier hard cider.

But she loves these ugly apples for another reason: They may be more nutritious and have a higher antioxidant content. Says Greenman: "I believe stress can help create a super fruit."

Ugly fruits and vegetables are today's pocked and scaly, dimpled, misshapen darlings — and there is a growing movement to sell such produce, not dump it into municipal landfills. As The Salt has reported, we toss out enough food to fill 44 skyscrapers each year. Why waste perfectly good food? This April a handful of Whole Foods stores in California will sell the cosmetically marred but nutritious produce for the first time.

But does some blemished produce pack an unexpected nutritional punch — courtesy of its own battles to survive?

We already suspect this is the case with organic fruits and vegetables. A 2014 review of 343 studies found that organic produce had lower pesticide residue and a 20 to 40 percent higher antioxidant content than conventional produce. Those antioxidants include compounds such as flavonoids, phenolic acids, anthocyanins and carotenoids, all produced by plants as defense mechanisms when they are stressed by pests. The study authors suggested that organic crops may be subject to more stress because they may receive fewer pesticides, in lower doses, and with less potent killing effects.

Another study of both conventional and organic apple varieties found higher antioxidant phenols and fruit acids in organic apples. The study authors noted, "The regular consumption of fruit acids is helpful in preventing illness and metabolic disorders. We recommend the consumption of regional organically grown varieties rather than of cultivars from integrated cultivation."

Ugly fruits actually bear the visible scars of their successful battles — dimpled or scarred where they fought off a biting or gnawing insect or surface infection. Greenman's ideal is a truly wild apple, one left to its own defenses in nature — with the cosmetic imperfections to prove it. Though not all pests and diseases are benign, she notes, a few common apple infestations are the result of harmless fungi that result in sooty "blotch" (dark patches) and fly speck (black dots), but do not harm taste or texture nor infect humans. These blotches are a result of the plant fighting off environmental insults — relying on its antioxidant defenses to do so. Greenman suspects those unsightly scars may reflect higher nutrition.

She may be right. One study showed that an apple covered in scab has more healthy, antioxidant phenolic compounds, called phenylpropanoids, than a scab-free apple peel. Another study showed that apple leaves infected with scab have 10 to 20 percent more phenolic compounds. Similar research has found high levels of resveratrol in grape leaves infected with fungi or simply exposed to the stress of ultraviolet light. A study of Japanese knotweed, a plant with a long tradition of use in Chinese and Japanese herbal medicine, found that infection with common fungi boosted its resveratrol content as well. Resveratrol is an antioxidant that's been well-studied for its potential cardio-protective action. All these antioxidants protect both plants, and probably the humans who eat them.

This does not mean that we should turn away from conventional agriculture, or make hard and fast assumptions about crops, says environmental biologist Brian Ward, of Clemson University. "There are so many factors contributing to antioxidant content," says Ward, who oversees research in both conventional and organic agriculture. "The most important factor is the plant itself — and the variety. That's genetic. Then there is the soil, its mineral content, and whether conventional or organic fertilizer is used. But yes, there is some interesting data that when plants are stressed by insects or disease, they produce metabolites that are good for us."

Greenman's insight intrigues microbiologist Martin L. Pall, professor emeritus at Washington State University. Pall says that our own innate, potent protective mechanisms can be activated by compounds in fruits and vegetables. In fact, he suggests in a recent research paper, those antioxidants may serve as mild stressors that kick our repair mechanisms into high gear. They activate a molecule in our cells known as Nrf2, which itself can trigger the activity of over 500 genes, most of which have cell-protective functions.

"This is certainly true of compounds like resveratrol," he says. "That part of the story is pretty clear." He says there's intriguing evidence that other plant compounds that increase under stress may be good for our health, too, but those benefits are not as well-documented.

Pall contends that we have co-evolved for eons with plants whose compounds benefit us. He points out that known longevity diets — such as the traditional Mediterranean and Okinawan cuisine — are rich in exactly these compounds and antioxidants.

So, backyard organic gardeners, rejoice: Your imperfect produce may be more perfect than you thought. Next time you hesitate over a flawed fruit, remember that it may be a hardy survivor bearing hidden nutritive gifts.